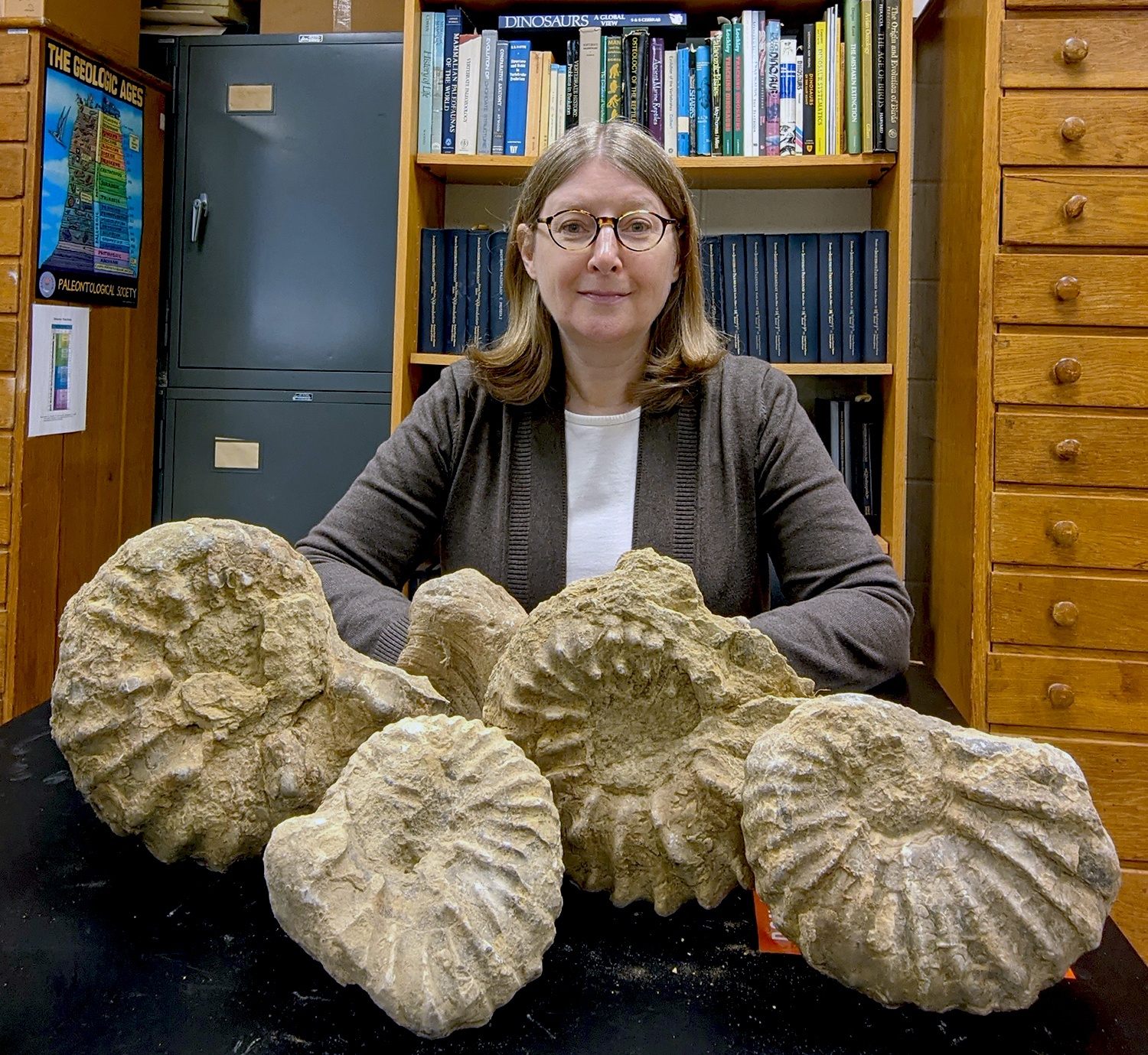 Evolution and extinction of an ancient mollusk, informs the research of Dr. Peg Yacobucci

A Bowling Green State University paleobiologist‘s research into the life and death of an ancient mollusk might uncover clues about the next global warming event on Earth.

Dr. Margaret “Peg” Yacobucci, a BGSU geology professor in the School of Earth, Environment and Society, studies the evolution and extinction of marine life, specifically a class of cephalopods known as ammonites.

Relatives to the modern-day squid, octopus, cuttlefish and nautilus, the ammonites lived and died in the world’s oceans for over 340 million years until they finally became extinct at the end of the Cretaceous Period, about 66 million years ago.

Her research of the ammonites’ evolution and extinction, captured in the fossils that can still be found today, is especially timely now. She is focused on past global warming events and what they might tell us about what’s going to happen over the next couple hundred years to life on Earth.

Her research and important contributions to cephalopod paleobiology were key to her being named a Fellow of the Paleontological Society in 2020. Yacobucci, the first BGSU faculty member to earn the honor, was also recognized for her notable commitment to teaching, mentoring, outreach, leadership and service to the paleontological community, as well as her support of diversity in science, of young women in particular. She has been an active member of the society for decades, serving as the education and outreach coordinator and the secretary.

She and other scientists in the field “study ancient life based on evidence recorded in the rock record,” she said. While her degrees are in geology, she is also a biologist because she studies biological questions using geological objects as the evidence.

“We humans have not lived through the kind of global warming that is forecast to happen over the next few centuries because of anthropogenic or human impacts,” Yacobucci said about the research. “However, there are times in Earth’s deep past when life experienced rapid warming similar to what we anticipate will happen in our own future.”

It makes sense to study those ancient warming events for potential clues to Earth’s future.

“There are some really interesting things in terms of what this is going to tell us about how we might respond to modern-day global warming,” she said. “It’s not a single story and it’s not uniform, but we’re finding out that some groups are dying out not necessarily only because of temperature change.”

Digging into her research

Her big-picture research looks at where species come from, how do evolution and extinction happen. She looks for answers to why some groups are more prone to extinction and die out while other groups can resist extinction and not die out for millions and millions of years.

“My research focus is on evolution and extinction, sort of two sides of the same coin,” she said. “How do we make species and then how do we kill them off? How does diversity - the number of species - seriously change over time, and what are the drivers of that change in diversity over time?”

“The rapid warming event that occurred 94 million years ago had to do with a big eruption of molten material on the surface of the Earth, which put a lot of carbon dioxide in the atmosphere and caused greenhouse warming like we’re doing today by burning fossil fuels.”

Many ammonites died out during this major extinction event, and by tracking how their anatomy, diversity and geographic distributions changed over time, Yacobucci gains clues on how groups diversify and make new species, and why some groups were dying out during this time of major environmental changes.

Ammonites’ extinction was not necessarily due exclusively to temperature. Their responses to this global environmental upheaval 94 million years ago seemed to vary regionally, with lower oxygen levels and changes in nutrient influxes into the ocean basins, in addition to temperature, being important drivers of diversity change, Yacobucci explained.

“I think that’s what we can expect to see happen over the next few hundred years. In different places, we’re going to see temperatures be the main driver or a decrease in oxygen,” she said.

The influence might also be ocean acidification, where carbon dioxide in the atmosphere dissolves in the water and makes the water more acid. Because shells require non-acidic environments, a more acidic ocean would affect the ability to grow shells for some marine life.

“All these different environmental factors are part of the story of global warming, which is why we talk more about global climate change than just about warming,” Yacobucci said.

“We’re seeing that in the past, and I think that’s what we’re going to see in the future,” she said. “We need to pay attention to all of these environmental factors and anticipate that the response of life to anthropogenic, human-made, warming is going to be different in different regions.”

Scientists know outcomes will depend on the actual circumstances and the groups. Just like the ammonites she studies. “Some of the groups were more resistant and were able to survive the event, and we’re still trying to figure out why.”

Her preliminary work that she is preparing for publication indicates groups that were in certain places were preferentially able to survive, meaning there was a geographic component to the phenomenon.

“Survival is partly, were you lucky enough to live in a refuge where conditions remained livable or not? That’s going to make you survive this extinction,” she said.

The big extinction event at the end of the Cretaceous, when an asteroid hit the Earth and the dinosaurs were killed, is also the event that killed the ammonites completely. But the nautilus survived, which is the crux of another longstanding question: They were two similar shelled cephalopods; why did one group die out completely and the other survive and remain today?

The difference might be related to how they reproduce, Yacobucci said. Ammonites tended to have small babies that lived near the surface waters that were highly affected by the asteroid’s impact and its aftermath. The nautilus babies were larger and stayed near the bottom, possibly contributing to their longtime survival.

“That means how big your babies were may have made you either survive that catastrophe or not,” she said. “That really gives you pause as a human. As a species we’ve only been around for about 200-300,000 years. We’ve never lived in a warm time.

“How lucky are we?” she said. “We’re lucky that we’re very widespread. Someone somewhere will survive a major catastrophe. We have that going for us, but on a lot of other metrics, we are one of the species more vulnerable to extinction.”

As a species, humans need to be mindful of the amount of finite resources consumed because there are clear limits that can’t be expanded indefinitely. The basic takeaway, at least from a paleontology perspective, is that “Earth is going to be fine. Life has always recovered from a mass extinction,” she said.

“We as a species are the ones that are vulnerable. We might be the dinosaurs of the next extinction, but life will recover.”