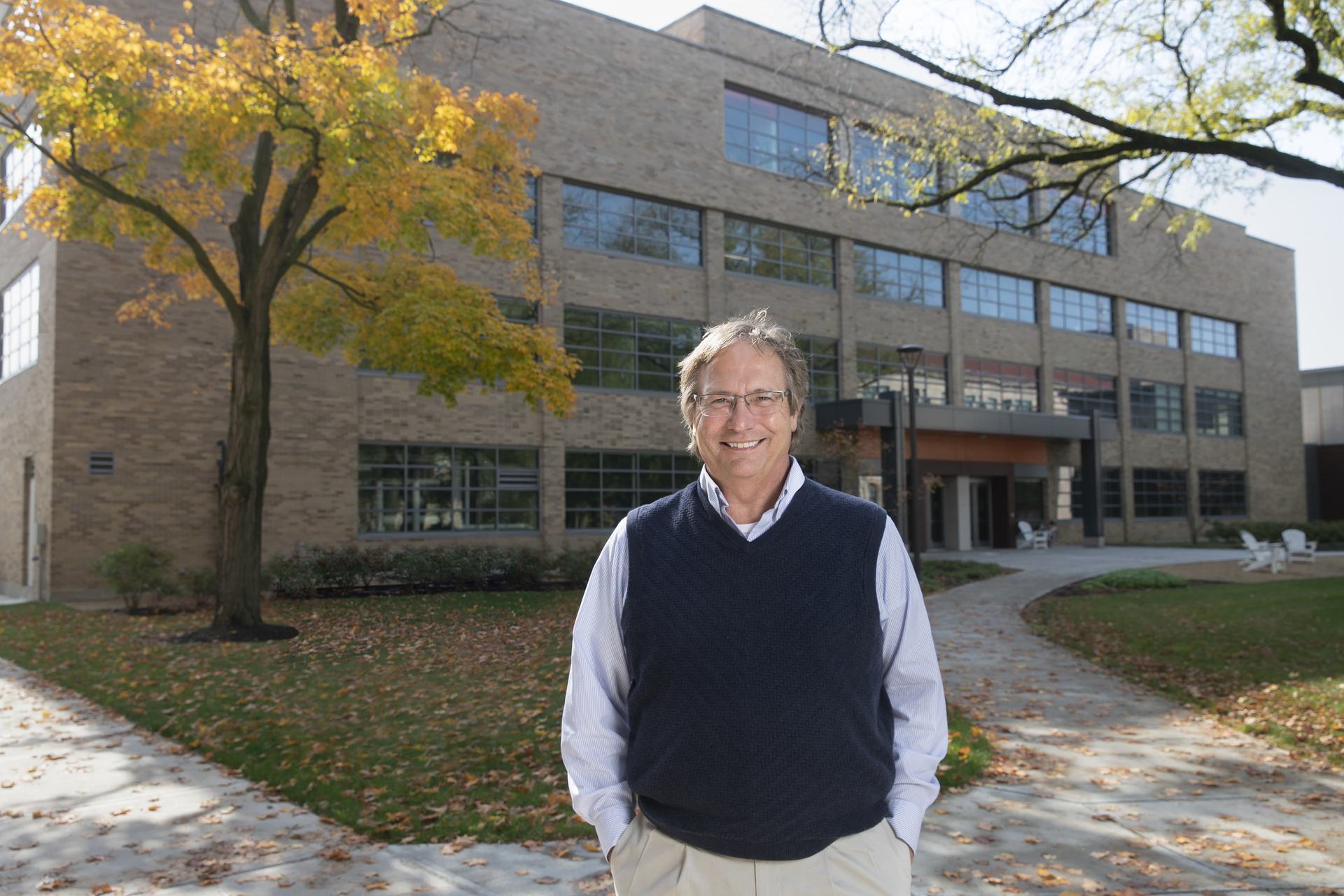 For nearly 40 years Bob Bortel has been at the helm of Bowling Green State University’s student media and publications operations. Known for red-pen critiques and “Hey Bob” writing techniques, he has guided and mentored upwards of 5,000 students that have been part of BG News, BG24, The Key, Obsidian, WBGU-FM, BG Sports Radio, all now under the umbrella of BG Falcon Media.

With his retirement from BGSU on Nov. 30, he left an operation that looks significantly different than when he stepped into the role in 1981 but which has managed to adapt to transformations in the industry. 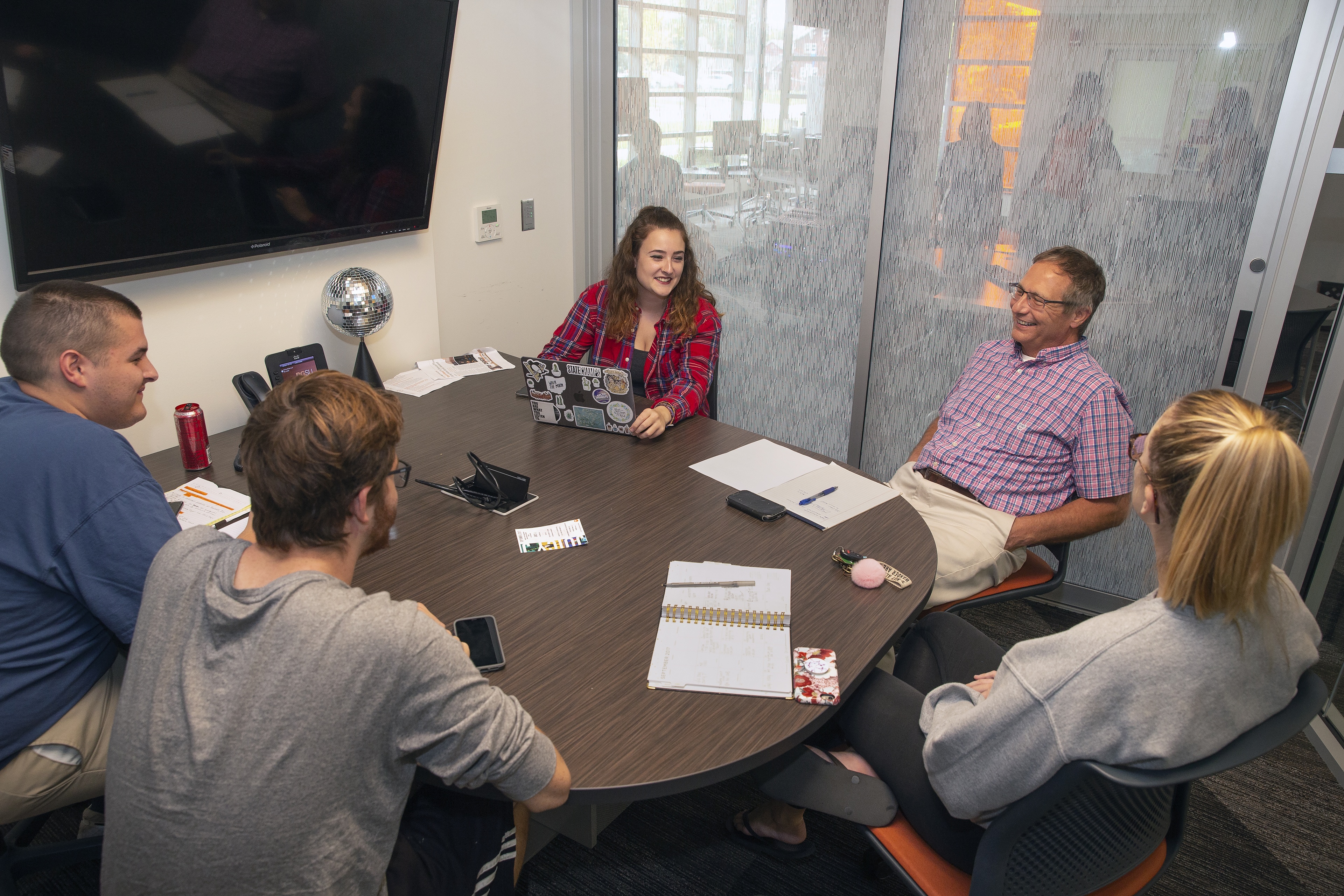 Among the biggest changes for the two-time alumnus — Bachelor of Science in Journalism in 1977 and a Master of Business Administration in 1983 — are technology and news culture.

According to Bortel, technology for BGSU’s student publications in the past 40 years has gone from typewriters and using editing marks on paper to computerized typewriters to a self-contained mainframe with hardwire terminals in the 1980s and ‘90s, to desktop publishing and finally to digital communications across multiple social media platforms.

A lot changed from the time Bortel structured the processes in the early 1980s, basing the operational design of student publications on a survey of 200 university student media organizations that he had done for his MBA thesis.

“At the time, there was no real clear roadmap about how to set up a student media operation,” Bortel said. “But there were some fundamental ideas that were important. I applied some of the ideas and restructured other areas, so from about 1983 well into the 2000s, revenue was not a problem and we had a successful operation.

“During the typewriter era, being a good typist was really a skill. Today’s use of spellcheck and other software to correct grammar has reduced the need for journalists to hone that talent."

When desktop publishing was introduced, Bortel had to convince students to focus on their reporting skills rather than laying out the pages for the newspaper.

“Suddenly there was a new, shiny box and everyone wanted to do that,” he said. “It took about two years to integrate designers into our system so that I could tell a really talented young journalist to stick to being a journalist.”

The age of digital communications established a new environment for the student media and publications operation. One of the consequences once the internet took hold was revenue started to decline.

“The size of the paper was always dictated by the amount of advertising we could raise, but as a native print journalist, the challenge for me was when print started to decline” and effectively maintain quality with less financial resources, he said.

The BG News was published four days a week when he started. His business-focused approach at managing growth boosted the paper to publishing five days a week in its heyday. Now because of digital communications and the affects of the coronavirus pandemic, the BG News is a weekly and the operation maintains a digital-first philosophy.

“When I think back, it’s amazing how much content we produced with a lot less technology," he said. “Granted, we had more students and staff to do it, but that change has not been all good for journalism.”

The pressure across the industry to be the first to publish information has led many times to inaccurate or incomplete information without the proper content needed to understand what was being read, he said.

“Everything has sped up and become much faster, including deadlines, the immediacy of releasing information, and the expectation for quick responses and quick reads,” Bortel said.

And as technology constantly changed, Bortel realized that he needed to draw upon younger people as resources because the new technology was much more native to them.

“The rapidly changing technology meant I had to stay up with it or have people around me who could keep me up with it,” he said. “I always had good people to help me stay on top of the changes, especially the last 10 to 15 years.”

While new information delivery systems, social media platforms and digital marketing were constant in recent years, Bortel continued to focus on the part of the job he loved most — working with and mentoring students. 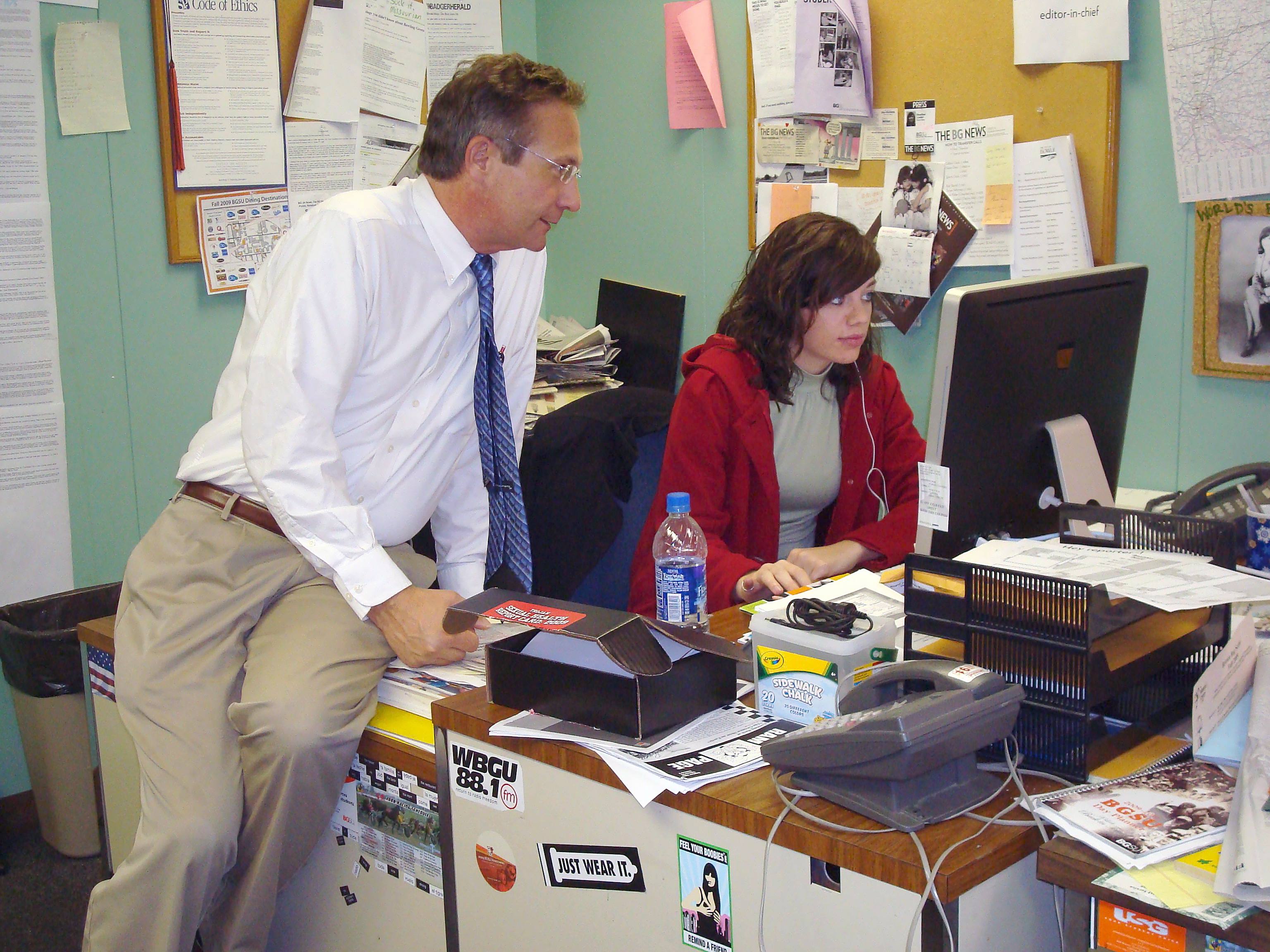 Students who work in any of the BG Falcon Media platforms benefit from the real-time, real-world experiences, Bortel said.

“It was a real-time publishing platform serving an educational need, but we had the same constraints of answering to a business community of an advertising base,” Bortel said.

"The incredible hands-on experiences I gained as a student journalist and young professional on the Student Publication Board and later on the BG News Alumni Society was incredibly rewarding," Bridget Tharp '06 said. “Those experiences are tied to the deep respect that I have for him as a professional, educator and leader in media.”

He strove to instill journalistic integrity in the students and always tried to drive home one of journalism’s ethical canons: Minimize harm.

Some of the lessons were hard. While young journalists are always eager to investigate stories, he tried to temper their tenacity by focusing on legitimate issues that should be investigated, Bortel said. “But they also have to realize that sometimes their investigations have consequences and they have to be cognizant of those consequences.

The work he did with students also helped shape them as writers, journalists and people. One of the early lessons he provided was to ask them, “Who’s your best friend?” The question often puzzled them, but he would further explain that their job as a writer was to write the story in the same way that they would summarize the story to a friend. It was known as the “Hey, Bob” technique, and it helped students better conceptualize how to write a story lead.

He also was known for his post-publication, red-pen critiques. They provided just the right mix of constructive criticism and praise.

“Bob is everything good about an advisor and mentor,” said Darla Warnock Brown ’99, former BG News Editor. “He was patient and understanding while encouraging students to get better every day. His passion for The BG News ran deep.

“I loved talking to him about the news business and about stories I was chasing — and looked forward to his red-inked remarks on The News once it hit print.” 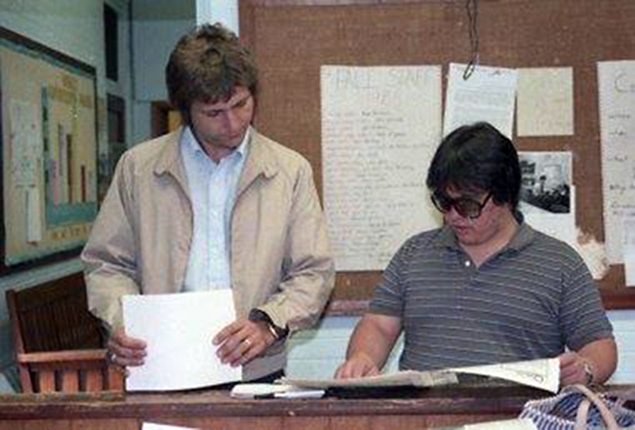 Keeper of the flame

His original career plan after getting his MBA was to run a small newspaper. Reflecting on the 39 years he worked at BGSU, he was happy to land where he did.

“These are unique kind of jobs,” he said.

Bortel is humble enough that he doesn’t see his work as a legacy, but he hopes he is remembered for “always championing the right of student journalists and expecting them to uphold their actions to the level the community expected of them, the keeper of the flame, so to speak,” he said. “I have defended and protected students’ First Amendment rights on this campus over the years because our charter says they are allowed to write freely.

Even with that, he always stressed to the students, “The First Amendment is not an absolute. There are responsibilities that go with the right to be able to write.“

Brown remembered “how he fought for opportunities for me and all his students and was always looking for ways to help pave the way for further student success.”

“His influence, student advocacy and protective instincts of the freedom of student press are unparalleled,” Tharp said.

From students to graduates to friends

Over the years, Bortel saw many successes.

Student success was at the core of his work since he started, first as a graduate student and then as the full-time director of student media. He saw many students graduate and go on to successful careers in journalism, as well as law, market research, business and public relations, to name a few. He knew the skills and mindset that go into reporting — writing, critical thinking and being able to take a lot of information and distill it down clearly and quickly — serve students well no matter what they do.

The organization also earned many awards over the years, with the crux of them coming between the late 1980s and the early 2000s, “when newspapers were still a pretty stable platform and they were able to make revenue,” he said.

In addition to turning around the revenue stream for the paper in the early 1980s, he was also proud to play a role in developing The BG News Alumni Society in 2002. He has maintained friendships with many of the students he taught over the decades, which helped when the idea of the alumni society was considered.

The idea to reconnect with alumni started as a precursor to the 85th anniversary of The BG News.

“When we looked at other contemporary models of successful student publications across the country, we realized they had more engaged alumni. They were used as mentors and resources, but they also helped out financially,” Bortel said.

“We decided it was important to engage our alumni, especially as we were nearing our anniversary.”

Alumni of the student publications are a committed group. “It has taken a lot of work to keep that up, but there are approximately 1,800 to 2,000 alums in the alumni database that we consistently invite back for homecoming,” he said. “This year we were planning to celebrate the 100th anniversary at homecoming, but with the coronavirus pandemic we weren't able to do that.”

A new BG News alumni website and 100th anniversary publication have been created and plans for an in-person celebration may still happen in the spring.

There are many alumni who are connected and recognize the value of the lessons they learned during their student media and publications days.

“Bob is one of the good guys, and I feel honored to have gotten the opportunity to have him as a mentor, adviser and friend. He’s a legend, and the legacy he created will never be forgotten,” Brown said.

Tharp credited Bortel for her decision to transfer to BGSU. “I remember walking through the newsroom with him on my campus tour and being so impressed by his pride in the student-led newspaper and his role as more of a professional critic than a manager of the daily paper,” she said. “His influence, student advocacy and protective instincts of the freedom of student press are unparalleled.”

Bortel knew with the onslaught of digital communications that he didn’t have the intimate knowledge necessary to really drive it and move the organization forward. “You recognize your strengths and your weaknesses and my weaknesses were starting to outweigh my strengths,” he said.

In retirement he won’t step away from writing completely. As a self-proclaimed “country gentleman” who lives on his family’s farm near Liberty Center, Ohio, Bortel plans to “let things settle a bit” before he decides exactly what he wants to do next. He knows he will write but he also plans to work on developing some websites and explore new opportunities.

“I’m a man of faith, which I’ve not been able to focus on in my role here, but I want to do some things that will satisfy that interest,” he said.

He plans to write about some of the faith-based experiences that “humbled me, brought me to my knees and changed my life and my heart,” he said.

He also is considering developing a retreat facility on some beautiful property that he owns near the Maumee River, a project he has kicked around for many years but the timing had never seemed right.

“I’ve always tried to help students here, and in retirement I hope to continue to help people sort things out,” he said, in a world that seems to make it increasingly difficult for people to find self-worth and peace.