Wood County: A swing county to watch in 2020 Election 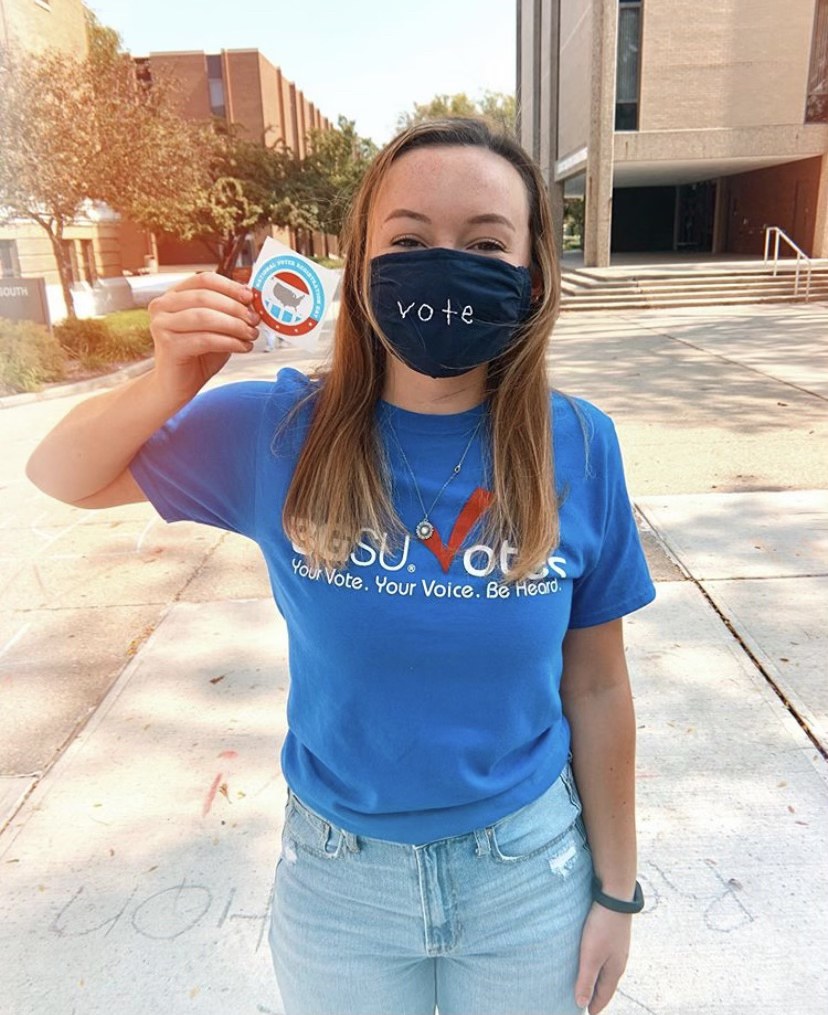 Dr. Melissa Miller, a professor of political science at Bowling Green State University, has a message to students about voting in the 2020 Election.

“One of the most important aspects of being a student at Bowling Green State University during a presidential election is that you are situated in a swing county within one of the key battleground states in the whole country,” she said.

According to Miller, Ohio has the best record of all 50 states in terms of picking the winner in every election dating to 1896.

“That is quite a record,” she said.

Demographics have shifted some, which gave Ohio a less prominent role in the 2016 election, she said. For the 2020 election, three other states are considered the main swing states: Wisconsin and the two neighboring states of Michigan and Pennsylvania. However, with the 2020 election being “too close to call,” don’t count Ohio out, she said.

“Because we’ve picked the winner more than any other state since 1896, that makes Bowling Green State University just an amazing place for students, whether they are political science majors or they’re studying any topic. I tell my students, it’s not just that we are in Ohio, it’s that we are in Wood County, which is one of the swing counties in the state. So as goes Wood County, so goes Ohio, and as Ohio goes, so goes the nation.”

Students can really feel the excitement of the election. Ohio in general and northwest Ohio more specifically, are in the thick of the campaign activity.

This area, in part because of the proximity to the swing state of Michigan, is getting extraordinary attention. Despite the restrictions of COVID-19, this region has experienced not only candidates’ visits but also a significant presence in advertising.

“When out-of-state students come here, I do think that some of them decide to register here in Ohio first of all it's because this is where they are living for the bulk of the year,” she said. “But also, there is a sense that you feel more franchised during a presidential election year when you are in a battleground state.”

“The opportunities for students to learn and pick up the vibe of the presidential campaign, it's alive here on the campus of Bowling Green State University, perhaps a little less so because of the pandemic,” she said.

Over the years, BGSU students have had some additional opportunities, Miller recalled. One of the more memorable times was in 2008 when Ohio was a top three battleground state. ABC News with news anchor Charles Gibson broadcast its evening network news program from campus. While on campus, Gibson visited Miller’s "Introduction to American Government" class where he gauged student support for Democrat Barack Obama and Republican John McCain and canvassed their opinions on various issues. The next day, Gibson conveyed the BGSU students’ views on Social Security to Obama in an exclusive interview that aired the following evening from Indiana.

“I will never forget that next night when Charlie Gibson told Barack Obama that my students were concerned about whether Social Security would exist when it came time for them to retire,” she said. “It just gives me chills.”

In 2016, several campus organizations came together to host three political debate watch parties on the nights of the presidential debates. Local media as well as an Associated Press reporter covered the events and BGSU students were once again interviewed live to share their opinions about what they saw.

That same year some of her students also volunteered at a Toledo television station, taking calls from the county boards of election to provide the results to the on-air journalists. It was exciting for Miller, who was in the studio providing analysis, to see her students involved in the process.

Miller believes it is an exciting time to participate in politics. “American democracy is as healthy as we make it,” she said. “Our students from all sides of the political spectrum are active and involved. It's good for democracy. And this is just a great place to do it,” she said.

Though the pandemic has interfered with some of the activities for this year’s election, she said it’s important for BGSU students to understand that “Ohio, Wood County and Bowling Green State University are really central to the election,” she said.

“Whether you are a Democrat, a Republican or an Independent, get out there and vote. It is a close election in Ohio and your vote could decide the outcome. That’s how close this is going to be,” she said.

Every four years Miller’s email inbox blows up with requests to do media interviews on the political scene. Eight years ago was unbelievable, and while Wisconsin, Pennsylvania and Michigan are more of the focus this year, she is still doing many interviews.

“That’s because the world is so interested,” she said. On one particular day, in a 24-hour period, not only had she talked with local media outlets, she also had been interviewed by a British television station, newspapers in Japan and Vietnam and a Canadian radio station.

Working with the media by providing political analysis is energizing for Miller. She enjoys the work, but also feels a sense of responsibility. “My job is not just to educate our students, but to the extent that I can, educate the public in unbiased ways.

“It is a privilege to be able to help folks understand the complexity of politics and break things down in such a way that I hope that both sides of the political aisle are not turned off by politics but are inspired to participate,” she said.

“The work aligns with BGSU being a public university for the public good,” she said. Faculty across campus are frequently sought out to be experts by the media throughout the year. “We take our job seriously. There are several political science faculty members who, during an election year, set aside our own political opinions, put on our political science hats and just analyze.”

She uses the same process in the classroom as she does as a media political analyst. “I provide analysis, point them to what are the real questions here and let students draw their own conclusions.”