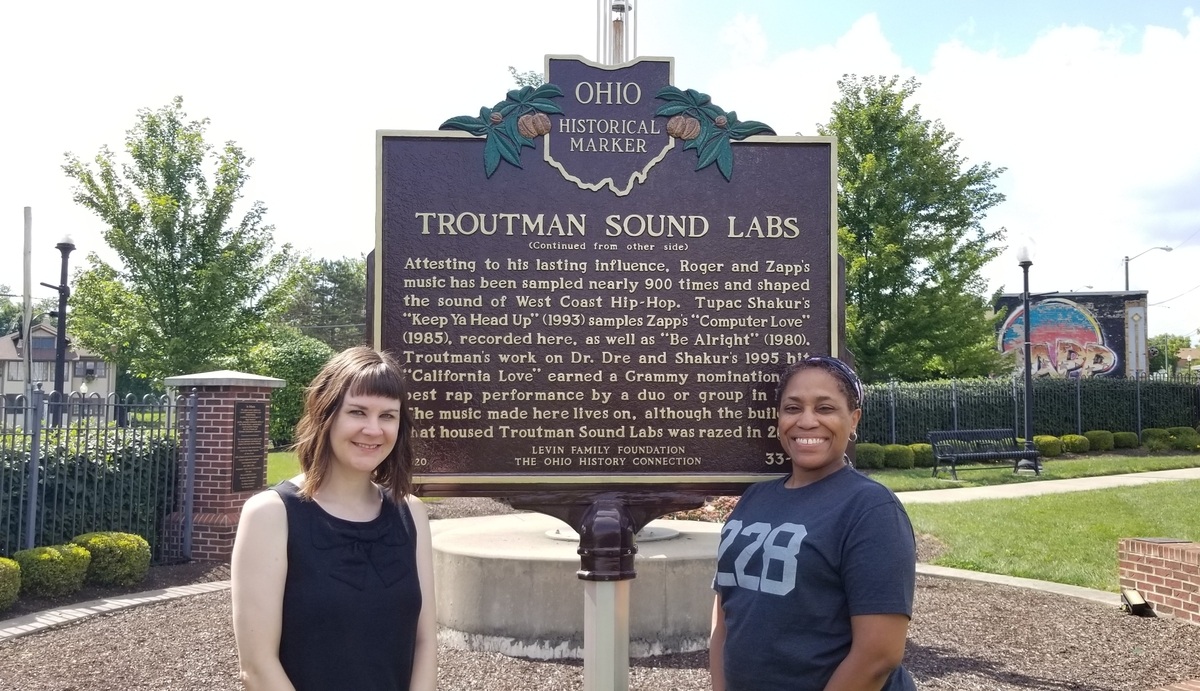 With sites like the Rock & Roll Hall of Fame and the Rhythm and Blues Music Hall of Fame, music is an important cornerstone in Ohio’s history. Two members of the Bowling Green State University community looked to add a marker to commemorate Roger Troutman, a big name in the world of funk, operating out of Dayton, Ohio.

Jacqueline Hudson, a fourth-year Ph.D. student in American culture studies, and Kari Boroff, an art history graduate student and 2020 BGSU alumna, won an application in 2019 to have an Ohio Historical Marker placed on the former location of the Troutman Sound Labs in Dayton.

“Kari and I took a museology course in Fall 2018 with Holly Kirkendall, who is the curator at the Wood County Museum. One of the school assignments we had was to get us familiar with the Ohio Historical Marker program,” Hudson said. “I brought to Kari’s attention that there wasn’t a lot of, if any, markers on Black music. I said, 'This might be a school assignment, but let’s go for this.'”

Boroff, a native of Dayton, was always enthralled by the music scene.

“I love music. I’m a big supporter of the Dayton music scene and I know that Dayton has a huge rich history of funk music. Lakeside, the Ohio Players, Slave and Zapp, they all came from Dayton,” Boroff said. “My husband brought the Roger Troutman Sound Labs to my attention.”

Founded in 1982, Troutman Sound Labs was a recording studio where Roger Troutman produced funk music for national and local artists, including his and his brothers’ band Zapp, whose music influenced the Grammy-nominated song "California Love" by Tupac Shakur featuring Dr. Dre. Many West Coast hip-hop artists like Snoop Dogg, Dr. Dre and Ice Cube cite Roger Troutman as an inspiration. The studio’s mission was to give back to their home community of Dayton and Ohio as a whole. Roger Troutman greatly influenced the R&B subgenre of funk until his untimely death in 1999.

As part of the assignment, Hudson and Boroff filled out the official application as if they would submit it to the Ohio History Connection, which administers the historical marker program in the state. They didn't know where or how far the application would go, but they submitted with the hope of recognizing the Ohio native's contributions to the music industry. They were excited when they learned their application was accepted for the Ohio Historical Marker program.

“Black music is American music. I’m a big champion of that and I want people to know that,” Hudson said. “Growing up, listening to this music with my parents, my passion is to preserve Black music. It’s a surreal moment, all these years later, to be on a Zoom call with Shirley Murdock and she says the Troutman brothers are really excited about our project.” Murdock is an American R&B singer, best known for her 1986 R&B hit “As We Lay” and for her vocals on Zapp and Troutman’s hit single “Computer Love.”

Hudson enthusiastically explained that in addition to Murdock, a number of hip hop, funk, and R&B artists all took samples from the Troutman Sound Labs, and many Black artists cite Troutman as an inspiration.

“For us to honor this man and this family’s mission to provide music to this small town that affected this whole nation – this whole world – is monumental,” Hudson said.

With plans for a dedication ceremony in the works, Hudson and Boroff’s marker was one of 34 markers that was introduced during the Ohio History Connection’s Ohio Open Doors event on Tuesday, Sept. 15, 2020. This year's event was a virtual program to accommodate safe social practices while honoring the hallmarks of Ohio’s history.

Hudson and Boroff appreciated the assistance they received from Kirkendall, whose class assignment inspired the project; Andy Verhoff and Laura Russel from the Ohio History Connection, who tirelessly helped them through the process; Ryan Levin and the Levin Family Foundation of Dayton, who graciously funded the marker project; and Nicole Steele and the board members at CityWide Development in Dayton, as well as Ms. Shirley Murdock.

This project snowballed for Hudson and Boroff. What began as a homework assignment from BGSU became a historical marker for people to learn a bit more about the great minds that Ohio has been home to.

“I brought it to Jackie and that was it,” Boroff said. “The rest is history.”