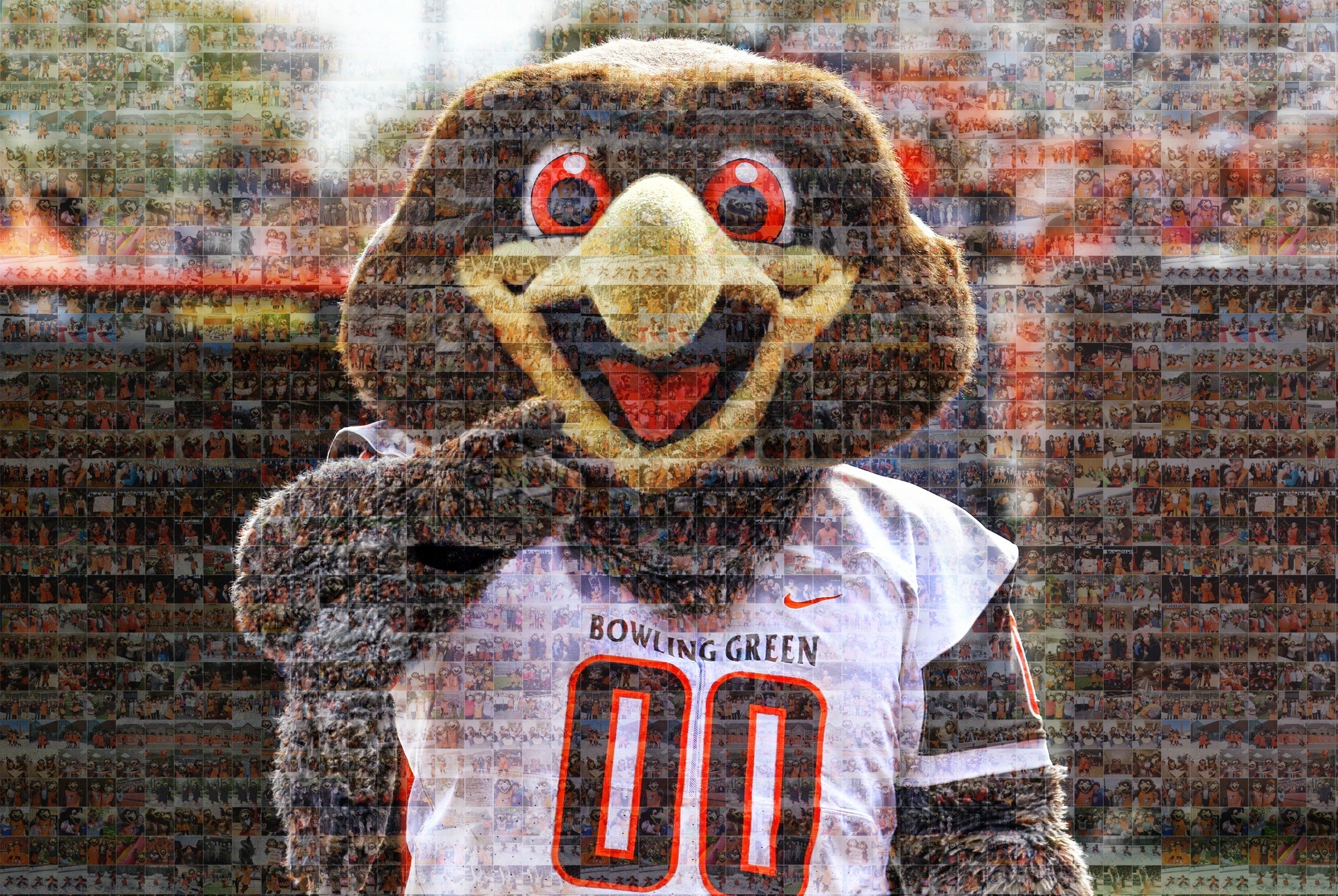 Freddie has roamed Bowling Green campus since 1950; Frieda since 1980 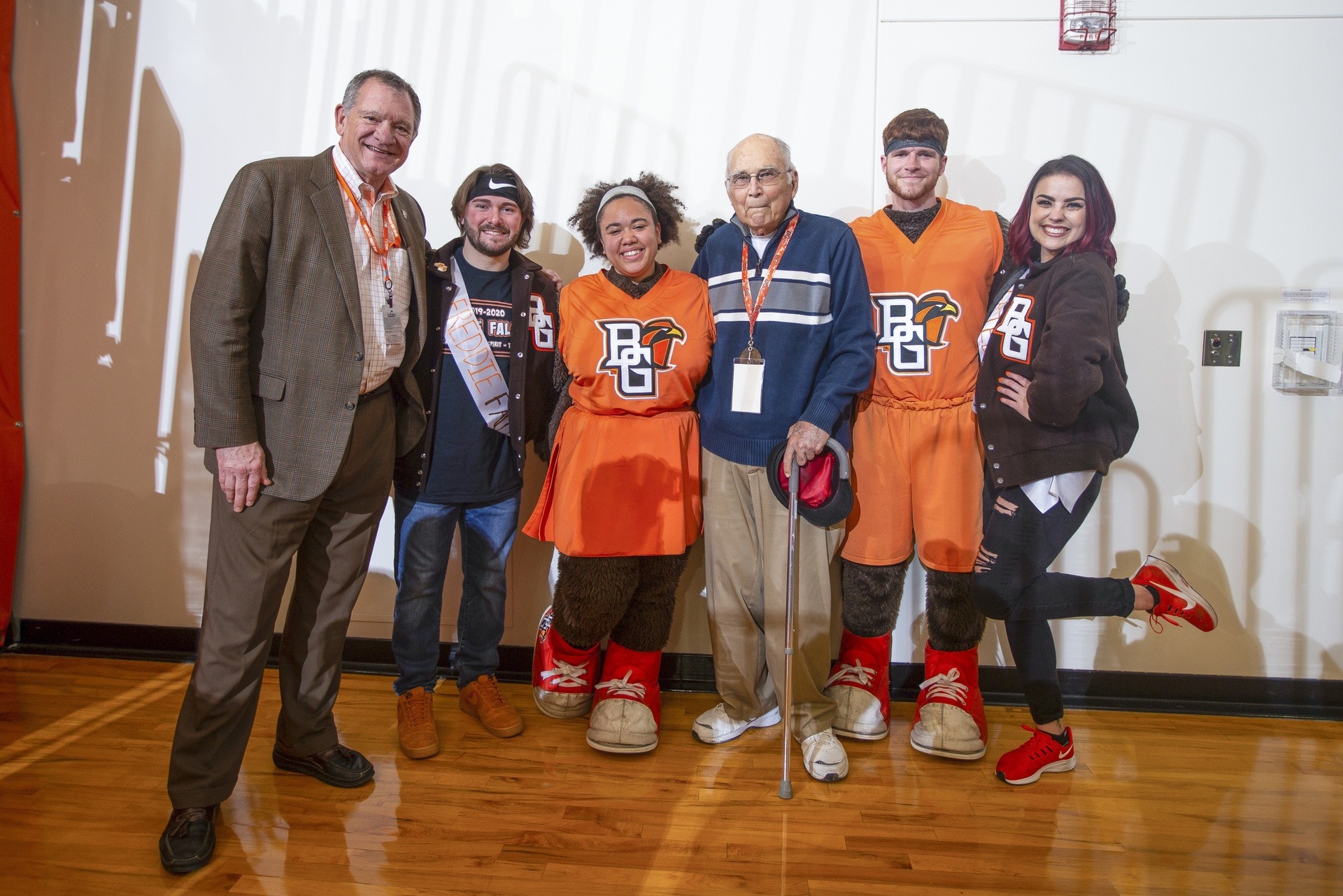 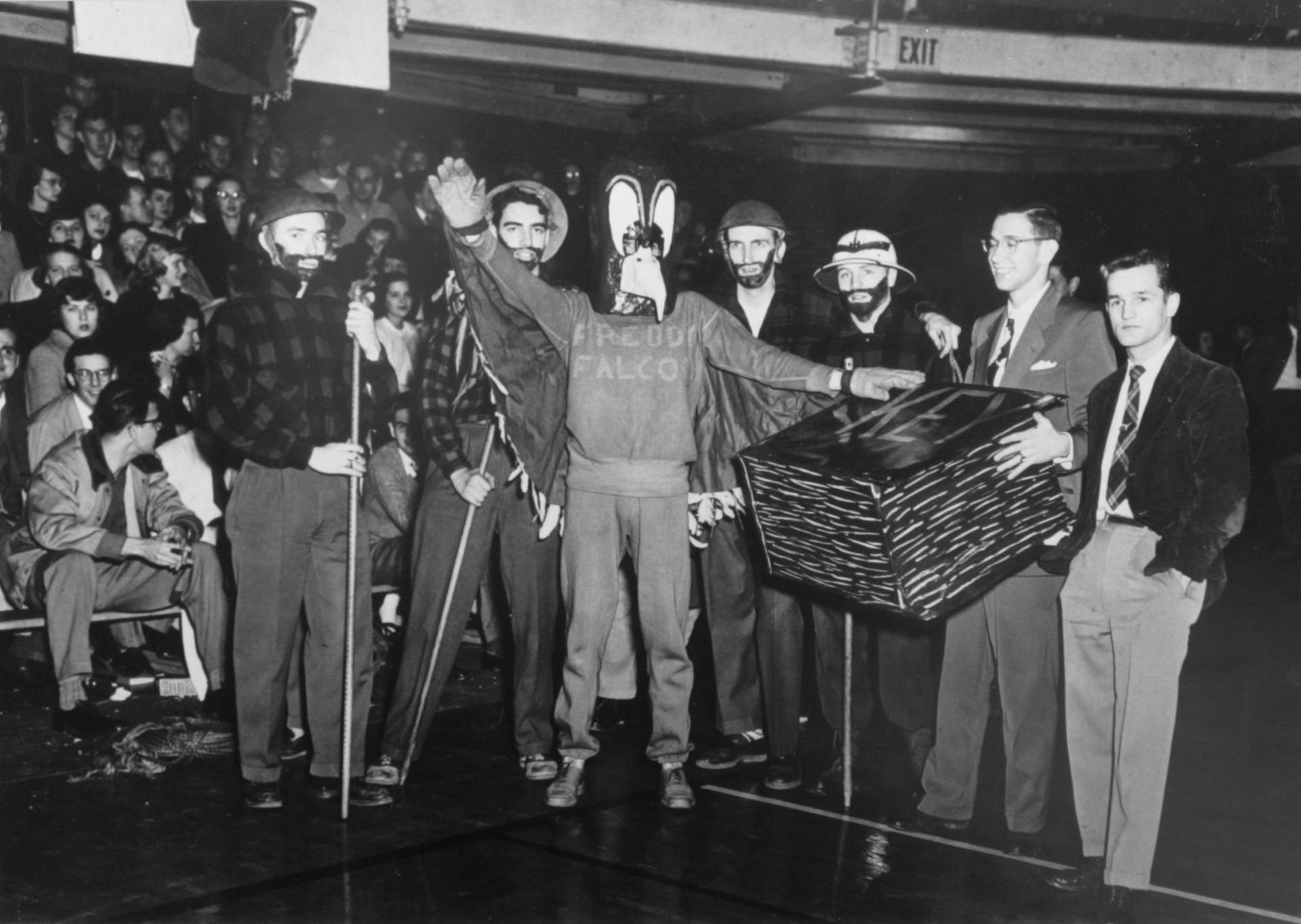 The role requires a great deal of deception, trickery, clandestine movements and an array of fabricated cover stories. Only a select few know who you really are as you move about in full disguise.

This undercover operation requires its participants to appear often in public places, be covered in feathers, wear funny shoes and be an effervescent merchant of good cheer. It also carries the weight of 70 years of tradition.

Freddie Falcon is one of the oldest college mascots in the country, but since there are new, young and highly energized students filling that role each year, he hardly seems a day over 18.

“It was something unique and I thought it might be fun, and it turned out to be a lot of fun,” said Fred Frisbie ’54, who was one of the first Freddie Falcons at Bowling Green State University, serving as the incognito ambassador of merriment and goodwill in the 1953 academic year.

Freddie Falcon was hatched in 1950 by the members of the service and leadership fraternity Alpha Phi Omega in an effort to boost school spirit at BGSU athletic events. Freddie made his debut during a men’s basketball game that school year between the Falcons and Ohio University. Wearing a head shaped from chicken wire, covered in papier-mâché and painted to resemble a falcon, the original Freddie had a feathered cape and wore a brown sweat suit.

“It wasn’t a work of art, but we thought Bowling Green ought to have a spirit person, so that’s what we came up with and Bob Taylor was the first Freddie,” Frisbie said. “We didn’t have a big budget — zero, no money — but we had a lot of school spirit so the concept worked.”

At the start, Freddie only attended basketball and football games, but secrecy was built into the role from its inception. During his tenure as Freddie Falcon, Frisbie hid the large falcon head and his costume in a mop room at the Alpha Chi Omega sorority house, where he worked as the house boy.

“Those girls never knew and at the end of the season when they eventually found out that I was Freddie Falcon, they were shocked,” he said. “My disguise was hidden right under their noses the whole year.”

Jon Zachrich ’13, ’18, who served as Freddie Falcon in the 2011-12 academic year, got connected with the mascot program through a friend and applied for the role since it provided him license to “act funny and goofy,” which was well outside his normal comfort zone.

“Going around and making people happy was a thrill, but keeping it all a secret is tough,” said Zachrich, who majored in history and political science and later added a master’s degree in public administration from BGSU.

“I didn’t tell my oldest brother, who was also at Bowling Green, until about a month before the reveal because I didn’t trust him to not brag to his friends,” he said. “You needed a small rotation of lies to explain where you were when you were out being Freddie. I even invented a nephew who was being baptized to cover my absence.”

Frieda Falcon was added informally to the BGSU mascot menagerie in 1966 and after being portrayed initially by a male cheerleader, the role was officially recognized in 1980 when Sue Sheard ’80 was the mascot Frieda. 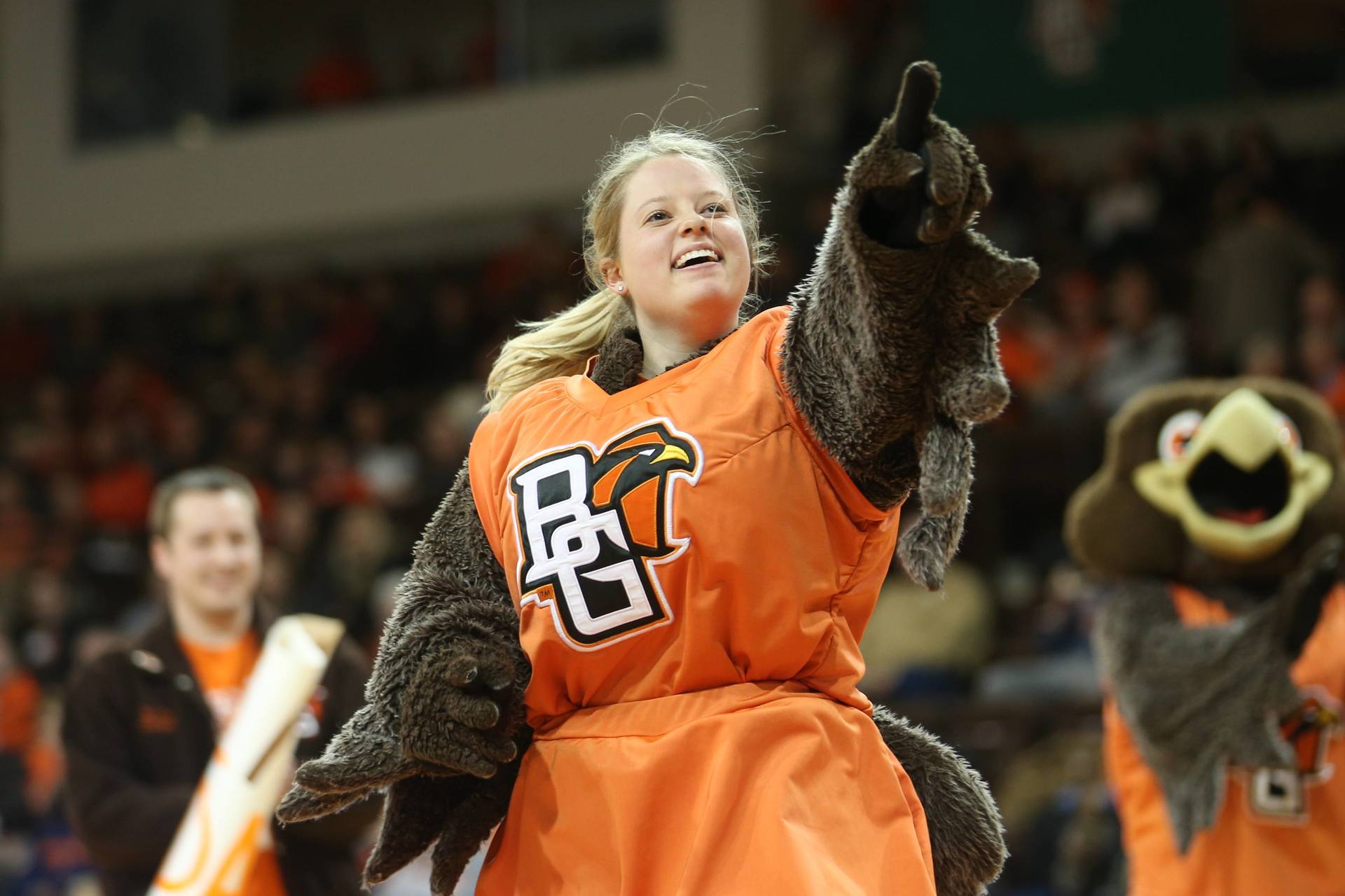 Christine Nelson ’18 was Frieda in the 2017-18 school year, and the visual communication technology major was drawn to the role through her frequent firsthand exposure to the lives of Freddie and Frieda while working as a photographer for the University’s Office of Marketing and Communications. In a vast change from the early days Frisbie described, Freddie and Frieda were seemingly everywhere.

“I saw the birds at so many events and they were always having so much fun,” Nelson said. “Sometimes, I would shoot four events in the same day, and they would be at every one of them. And everyone around them was always smiling.”

Nelson said she appeared as Frieda at more than 200 events that year, but despite the demands of the schedule and the complicated dynamic involved with maintaining your secret identity, the role was one of the highlights of her days on the Bowling Green campus.

“It was better than I expected and the most rewarding part was serving the BGSU community and students in an anonymous way, a selfless way,” she said. “Seeing little kids smile, or sitting down next to that student at the game who was there alone and cheering them up — I would have done the entire year without the benefit of the reveal and been completely happy.”

The reveal is that carefully choreographed moment, usually at a basketball or hockey game, when the falcon head comes off and the world gets its first look behind the curtain that shrouds the secret world of Freddie and Frieda Falcon. Outside of maybe a trusted family member, a faculty advisor, and an official “secret-keeper” who helps facilitate the clandestine nature of the role, the identity of BGSU’s official mascots is a tightly safeguarded treasure.

“For that whole year nobody knows, and when you put that costume on you go from being Peter Parker to being Spider-Man so keeping the secret is critical,” said Stephen Elchert ’83, an accounting and information systems graduate who after a year in disguise was revealed as Freddie Falcon at a men’s basketball game at Anderson Arena.

“The reveal — that is your one moment — but what makes this so important and valuable is realizing that when you are Freddie or Frieda Falcon, you have the opportunity to have a much bigger impact on people than you could ever have as yourself. You put that costume on and there is this power to make someone else’s day. There is amazing energy and enthusiasm built into this role.”

There have been about 190 students who have served as Freddie or Frieda Falcon — a second individual was eventually added to each of the roles when the demand for appearances grew exponentially. Freddie and Frieda often show up at orientation, campus tours, alumni events, civic gatherings and a wide range of other BGSU activities outside of their obligations to all of the Falcon athletic teams.

“Freddie and Frieda Falcon, our official mascots, they represent the very best of Bowling Green State University,” Rogers said. “Our students dedicate an entire academic year to help spread the goodwill of BGSU on our campuses and in our community. Participating in on-campus activities and programs not only leads to an enriched college experience but also can instill leadership opportunities in students’ careers. I am so proud of the accomplishments every single Freddie and Frieda Falcon — Ay Ziggy!”

The Freddies and Friedas from all decades also meet several times each year for reunion-style events, and some travel back to campus to witness the most recent reveal.

“Being Freddie or Frieda Falcon is an amazing honor and a tremendous obligation at the same time,” said Zachrich, director of marketing and communications at BGSU Dining by Chartwells. “It taught me that you can have a love for something and that you don’t have to get anything back in return. I don’t know if I could have had that kind of personal growth any other way.”

While serving as Freddie, Zachrich was at many of the events hosted by the admissions office and he met another student, Sarah Grandon, who worked for that department, after his reveal ceremony. They struck up a friendship that has grown into much more.

“Being Freddie Falcon leads to some remarkable experiences, and some lasting friendships,” Zachrich said. “Besides that, I also got a wife out of the deal.”

The NCAA website lists — incorrectly — that the first “costumed mascots were (probably) Brutus Buckeye and Major League Baseball's Mr. Met, who both debuted in 1964.”

Freddie Falcon was a teenager by then, as Frisbie, the Freddie from 1953, points out.

“There were other college mascots that came along later, but I think we had one of the first,” the 87-year-old said. “And it was so much fun being Freddie Falcon. If the clocks were turned back, I’d definitely do it again.” 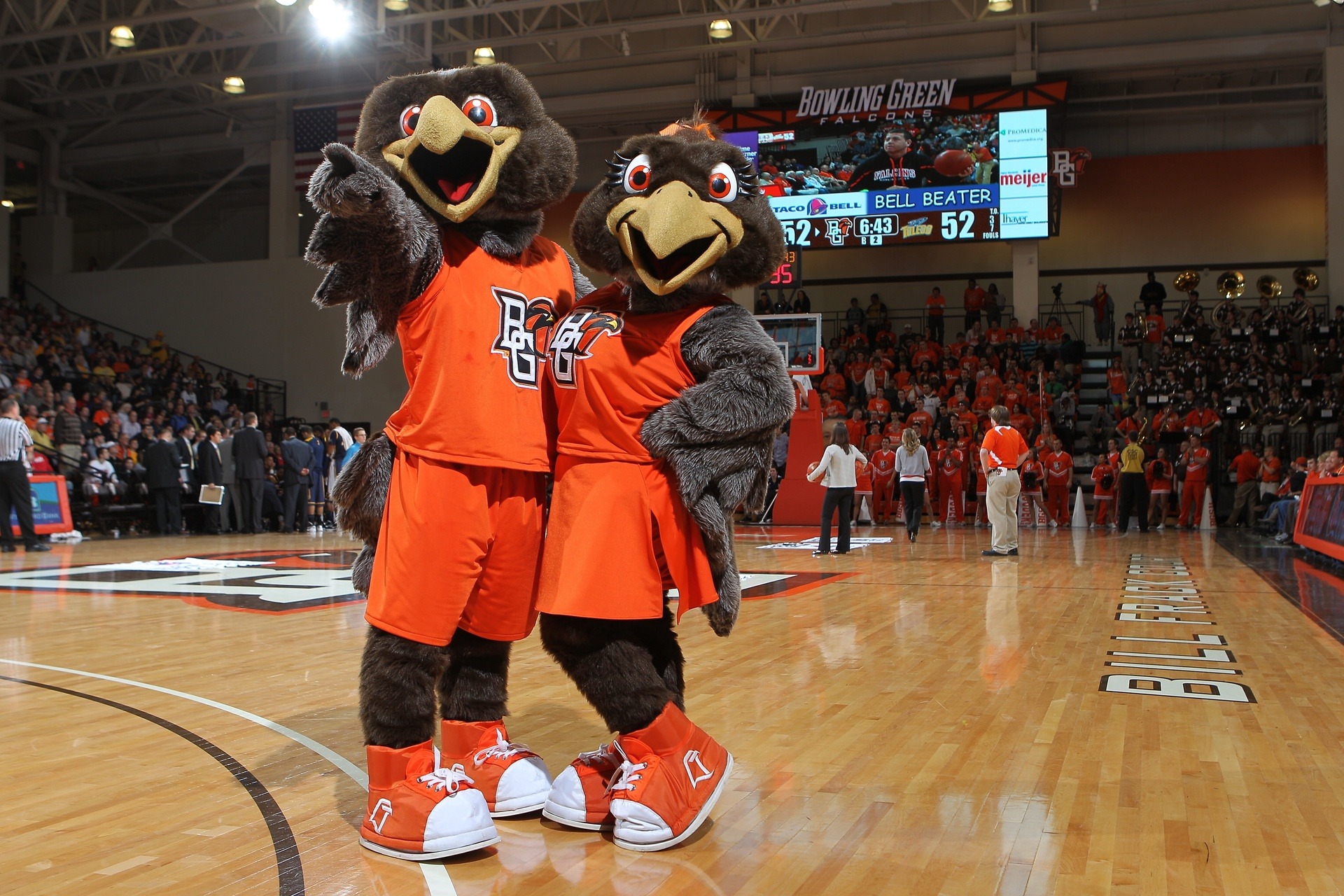