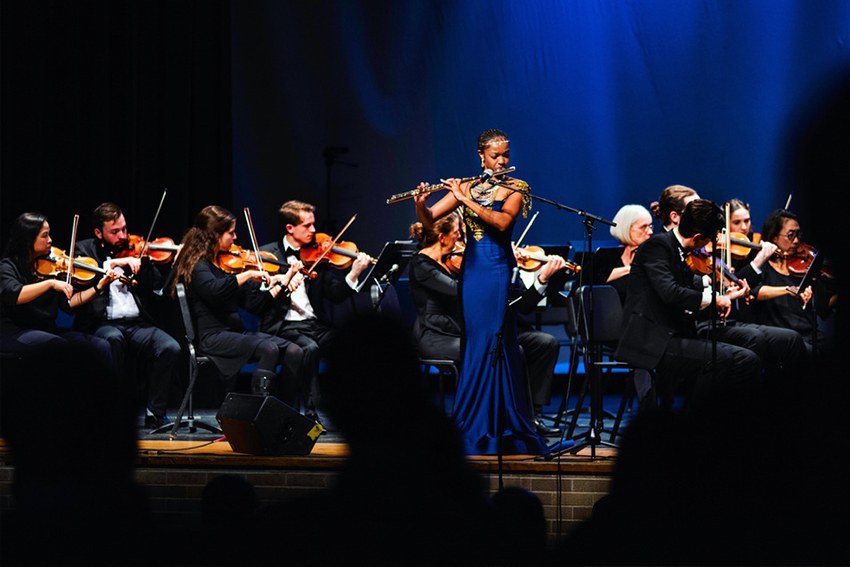 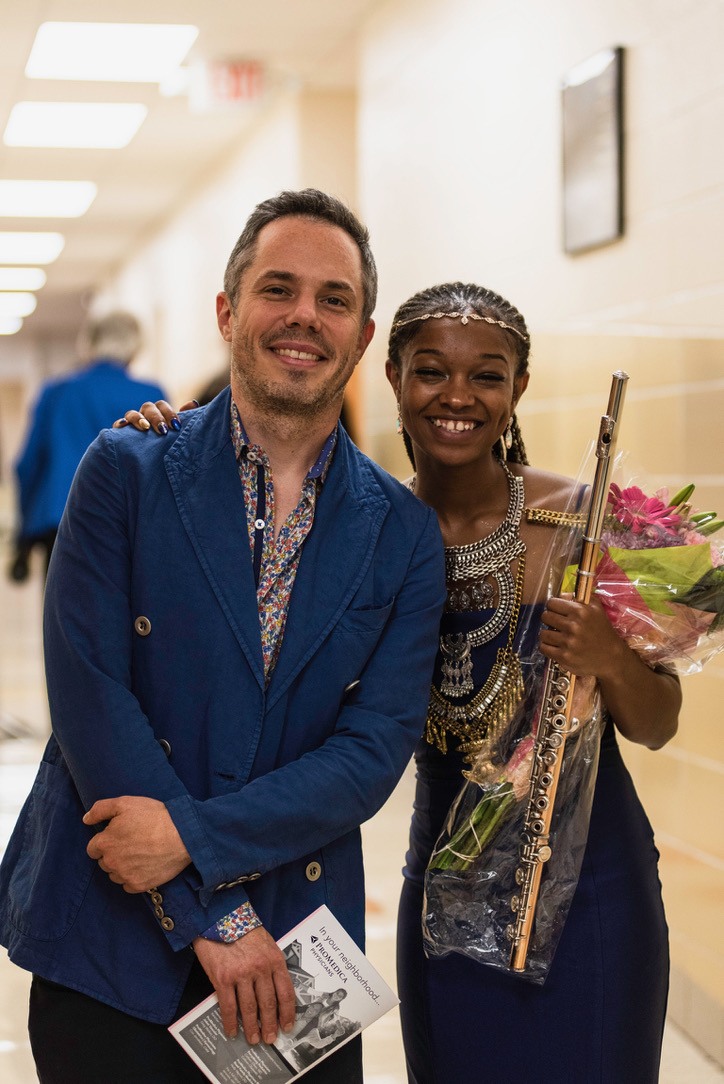 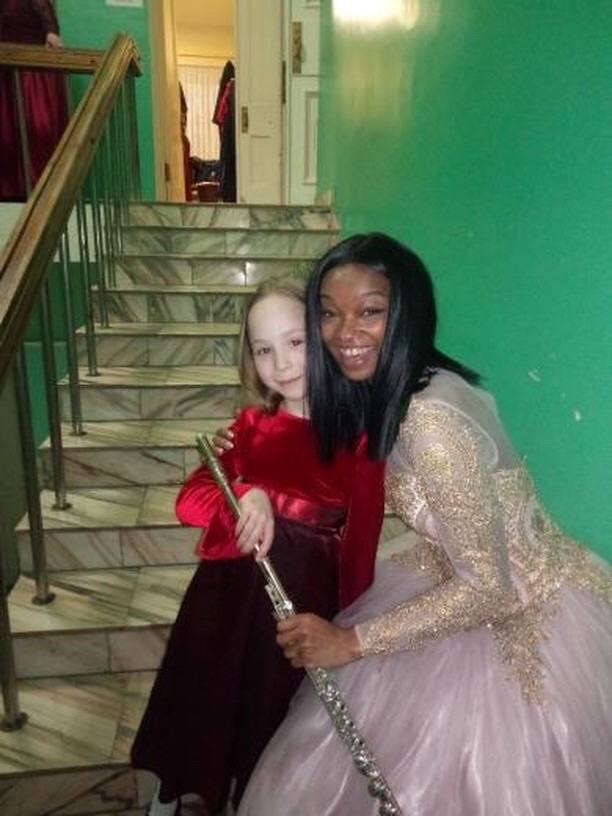 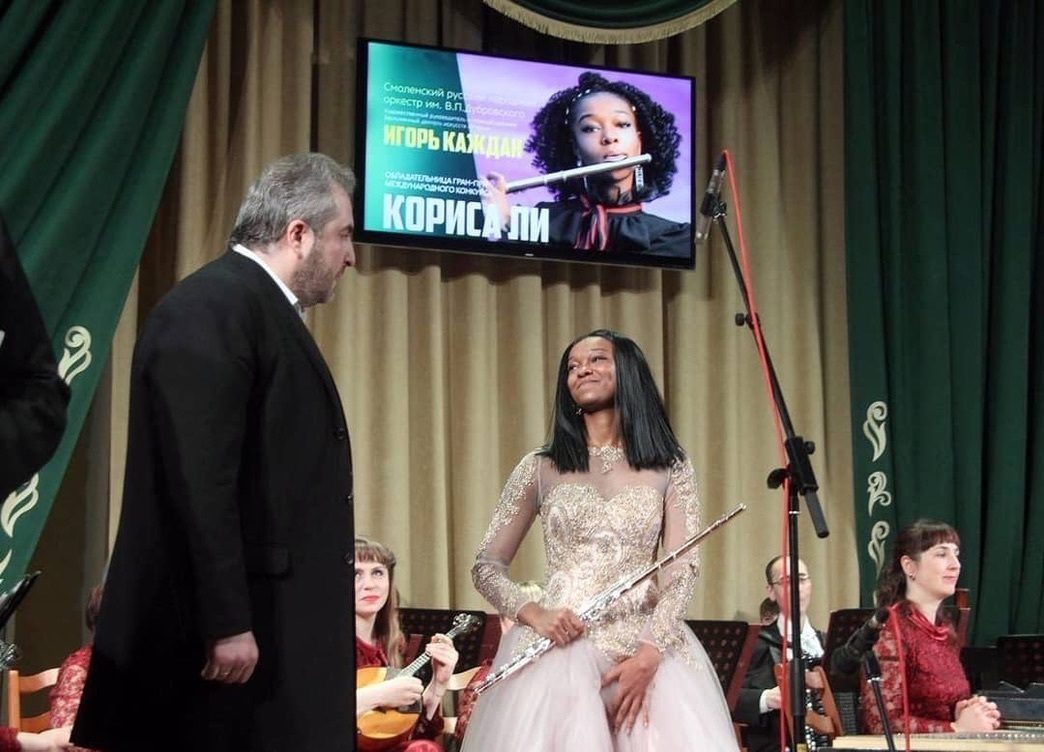 For all of Coreisa Lee’s life when opportunity knocked, she answered.

Lee, a 2020 College of Musical Arts’ Master of Music Performance graduate who was born into a musical family, left behind her family and home state of Alabama to advance her musical career, first in New York City and then Bowling Green, Ohio.

Each adventure has provided new perspectives and shifted her long-term goals a bit. As an undergraduate student at the Manhattan School of Music in New York City, “surrounded by amazing musicians from all over the world,” she affirmed her goal to become a professional flutist.

During her two years at Bowling Green State University, she never wavered from wanting to play professionally, but she broadened her career goals to consider becoming a teacher. She realized that becoming a professor could check off two personal goals: one, to teach the next generations of musicians and two, to support her financially allowing her to inspire others through her performances.

Thus, the next opportunity for her will be to pursue a Doctor of Musical Arts degree at West Virginia University this fall, where she earned a provost fellowship.

“You see, I was destined for music,” she said with a smile.

Her musical journal started early. She sang before she spoke, and played piano for a few years before she discovered her instrument of choice: the flute. Her father, Howard, whose life mission is to preach and his happiness to play saxophone and sing, enrolled fourth-grader Coreisa and her older brothers in a musical program at the Alabama Jazz Hall of Fame. He hoped music would take hold for them as it had for him.

“That was my first experience in learning music, learning how to play by ear,” she said. “It’s also where music became part of my heart and soul.”

By the time Lee was in elementary school and junior high, her band teachers told her she should take it seriously “because no one else is practicing the flute like you are,” she recalled them saying.

They helped her get private lessons and for high school — thanks to her mother Jeanette’s insistence — she was able to attend the Alabama School of Fine Arts on a scholarship.

“Surrounded by so many other creative, young high school students, that is where I got most of my arts culture and creative juices,” she said.

After high school, she auditioned at the Manhattan School of Music and at the University of Alabama.

“I actually planned to stay in Alabama, but the music conservatory gave me more money, so it was like, ‘I guess I’m going to New York,’” she said.

“New York was really interesting because I went from a completely creative atmosphere (in Alabama) to an environment (in New York) that pushed me to be better,” she said.

She also was told that if she wanted to be a professional, she needed a professional-level flute. The flute she played, endearingly named “Mercedes,” was a nickel-plated instrument that cost $1,000, which was a lot for her family’s finances. A new flute would cost $13,000.

So, knock, knock, who’s there? It was Samantha Sullivan, a producer for television personality Meredith Viera’s television magazine show, “Meredith.” Sullivan saw Lee’s GoFundMe account seeking support for a new flute. She reached out to Lee and determined her story was worth sharing on Viera’s show.

See how Lee was surprised with a new flute.

It was also in New York where she gained an audience and so many new connections. Not only did the television appearance boost her visibility, she also was principal flutist for the New York Youth Symphony during her junior year at the music conservatory.

Another serendipitous connection in New York was when a young flutist visited the conservatory for a master class. That flutist was Dr. Conor Nelson, an associate professor of flute at BGSU and a previous student of Professor Linda Chesis, who was Lee’s flute professor. Lee and Nelson immediately bonded and set the stage for the next phase of her life.

As she finished her bachelor’s degree, she was planning to go on for a master’s degree in music performance. Another turn of events happened after she sustained a hand injury. She learned that the way she held and handled the old flute was not good for the weight of the new, “decked-out” flute. Though she auditioned to enroll in master’s programs at Yale University and BGSU, she needed to step away from performing in order to heal herself.

A year later, she was directed to a new path. Nelson suggested she come to BGSU where he would help her to learn proper flute-playing techniques.

“It was kind of perfect,” she said. “Dr. Nelson is a Verne Q. Powell artist, the company which made her professional flute. He welcomed me with open arms, helped change the way that I play now and helped me feel like a much more confident player.”

At BGSU, she also discovered that her favorite color growing up — bright, tiger orange — just happened to be one of the University’s school colors.

“So everywhere I walk on campus, I’m emotionally happy because I’m surrounded by my favorite color,” Lee said.

Also, during her time at BGSU, she entered and won a flute concerto composition hosted by composer Eugene Magalif. The Grand Prix award earned her a beautifully carved flute head joint and a trip to perform in Russia.

One of the best benefits from attending BGSU was that Nelson gave her the chance to be a teaching assistant and teach her own flute students. That presented another turning point for Lee.

“Two years ago, if you had asked, I would never have considered being a teacher,” Lee said. “Now that is one of my goals.”

All of these experiences have led her to this point, Lee said.

“I’ve had so many people support me over the years. I feel like I don’t want to let anyone down," she said. "I know I’m on the right track. I just have to keep going, keep my push to inspire people.”