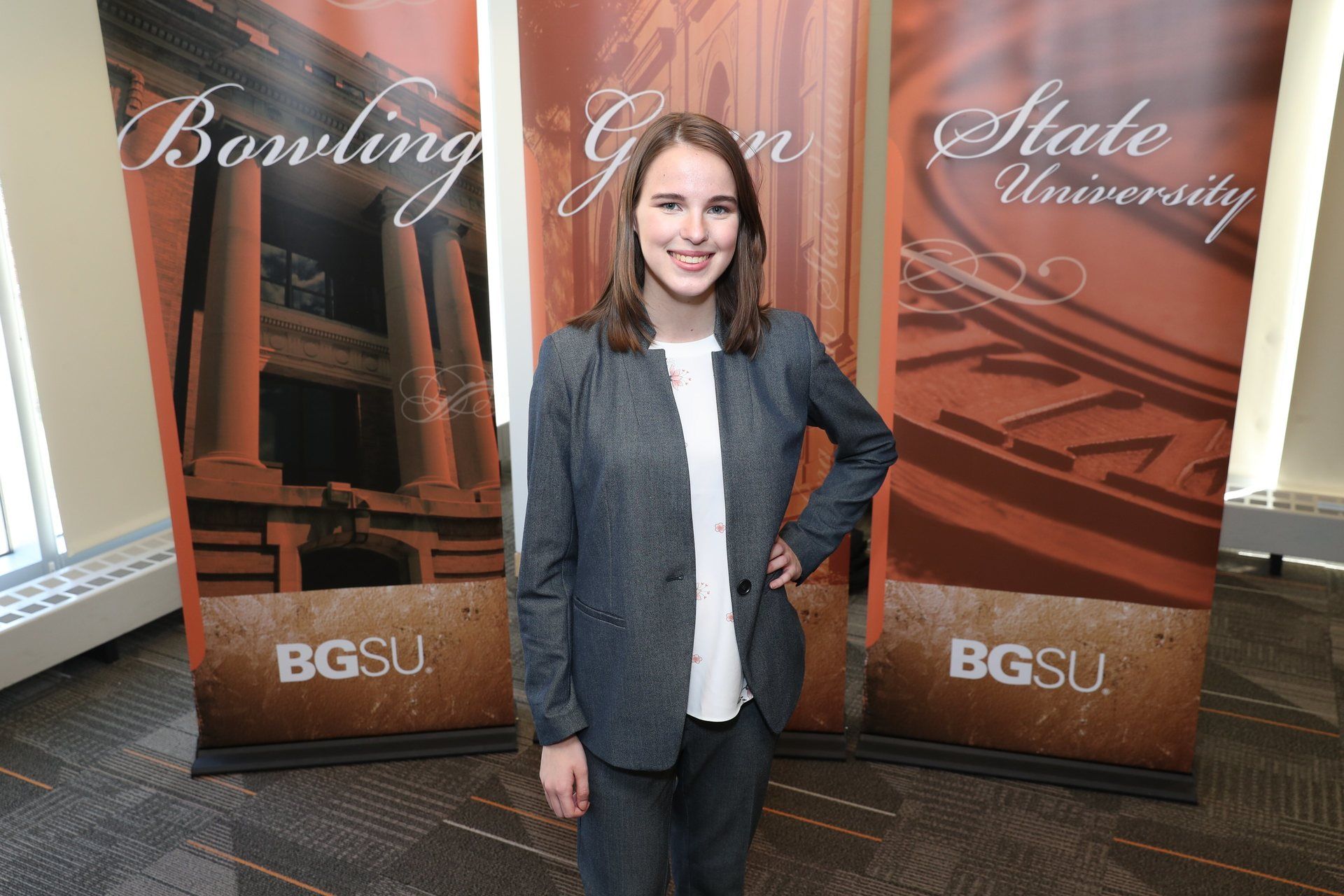 The Hoskins Global Scholarship enabled Quinn Eberhard, a junior in Honors College and the College of Arts and Sciences, to develop an algorithm, or set of rules, so scientists worldwide could make faster progress in their research. Eberhard is majoring in chemistry (biochemistry concentration), with a biology minor.

At first, Eberhard said, she dismissed the scholarship idea. “It sounded like a lot of work, and I didn't even have a project in mind,” she said. “Additionally, there had never been a first-year recipient; I knew the program trended toward preferring second- or third-year students.”

It was through the support of several professors - Dr. Morgan-Russell, Dr. Leontis and Dr. Zirbel – that she refined and developed her Hoskins project.

"Life is short, and there are not many opportunities for once-in-a-lifetime experiences. But this absolutely is one. No, you are not too young, too naive, too busy. Wherever you are in your career here at BGSU, now is the right time to apply."

In her research, Eberhard focused on RNA and protein sequences. Rather than collecting and manually analyzing data for each application, she realized that an algorithm would save months of work. “I used my Hoskins scholarship to travel to Cambridge, England, where I worked with researchers at the European Molecular Biology Laboratory - European Bioinformatics Institute.”

As a result, she developed an algorithm that could be included on a webserver for other researchers – benefiting scientists worldwide and enabling faster progress in research. The potential is far-reaching, but one of the areas is cancer research.

The differences between Cambridge and Bowling Green, or even Eberhard’s hometown of Dublin, Ohio, are substantial. “I found myself in the heart of a city that appreciated innovation and discovery,” she said. “Recreational parks honor the discovery of the DNA double helix structure, or old poets of years past. Many of the people who call Cambridge home come from different parts of the Earth and seek to understand the mysteries of the universe.” Eberhard even briefly stayed with someone who conducted research in the Antarctic.

How did it feel to be surrounded by such intellectual diversity? “It gave me the chance to face down the feeling that I was ‘just not enough,’” she said. “I wasn't too young or too optimistic. Sometimes the world needs someone to act, and you are the person to do it. I went to another country to do a project that I had very little experience in, and I did it.”

Because of the Hoskins Global Scholarship, Eberhard said, “I went to Cambridge a nervous but excited 19-year-old biochemistry student, and I came back a bioinformatician. I am more confident in my abilities and in myself as an individual than I ever remember being before the trip.”