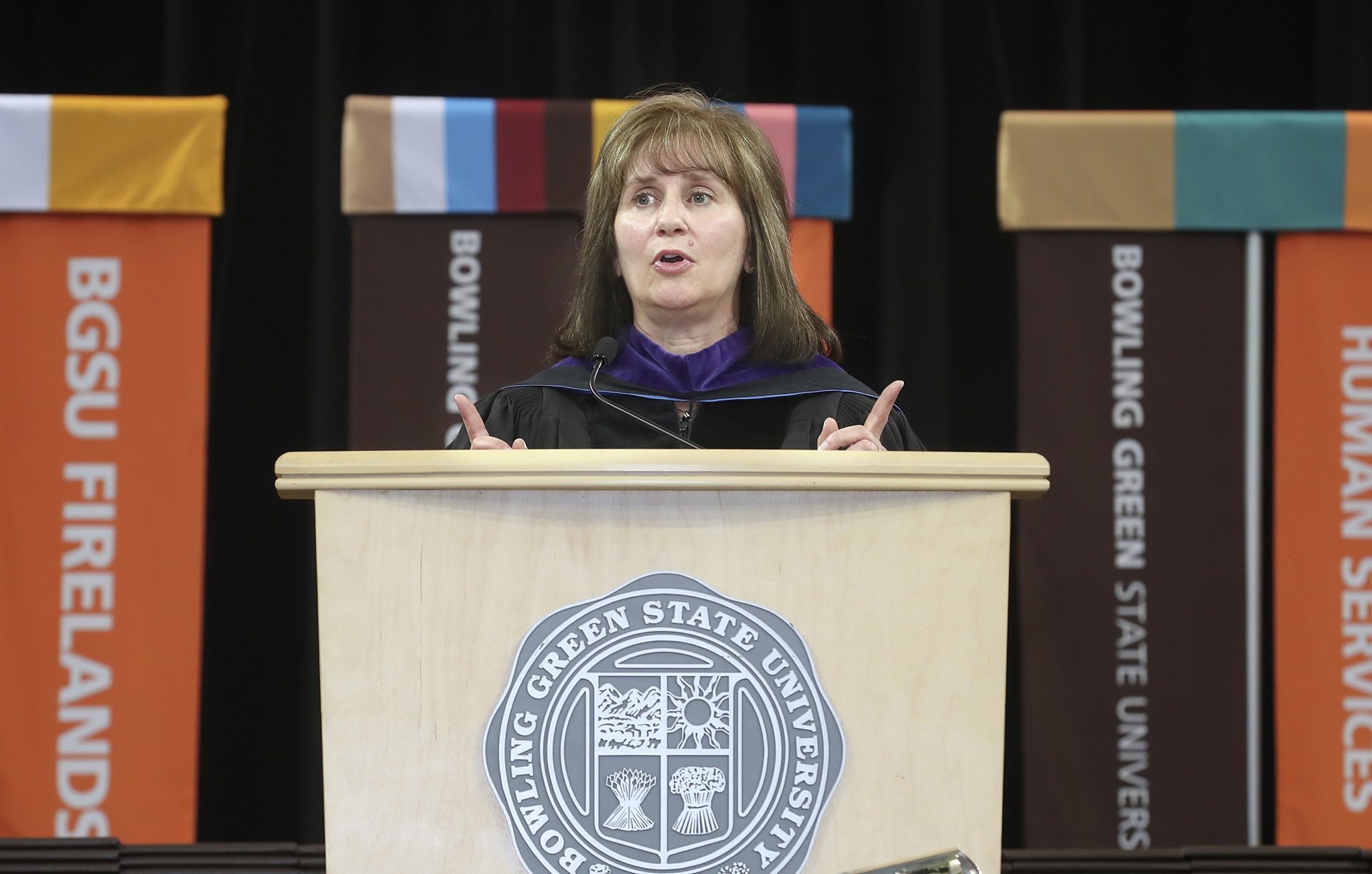 Sheryl Maxfield ’81: 'Speak the truth. Share what is on your mind. Raise your hand.'

Sheryl Maxfield ’81 revealed the two major reasons for her success in her 40-year career as she addressed Bowling Green State University graduate candidates during its 296th graduation Dec. 13 at the Stroh Center.

“I’ve always looked for the similarities instead of the differences,” she told the December Class of 2019. “The search for common ground has been a guiding principle in my career.”

The graduating class included 1,047 candidates. Among the undergraduates, 89 were presented associate degrees and 731 bachelor’s degrees. Of those, 190 received honors for their high grade-point averages. The 217 graduate students included 187 candidates for master’s degrees and 30 for doctoral degrees. The Dec. 13 ceremony included candidates from the Graduate College and the colleges of Business; Health and Human Services; Musical Arts; Technology, Architecture and Applied Engineering; and BGSU Firelands.

Maxfield, who earned a bachelor’s degree in journalism from BGSU in 1981, was appointed director of the Ohio Department of Commerce in January by Gov. Mike DeWine. She serves as a member of the governor’s Cabinet and is responsible for the overall leadership and direction of the commerce department.

“This campus, my experience here, was critical in making me the type of leader that I am today,” she said. “I am now the director of a state agency that has 850 employees and a significant footprint in the lives of Ohioans. Those employees examine banks, inspect skyscrapers, monitor all the liquor sales in the state and regulate medical marijuana cultivators and processors.

“And I know I’m in that leadership role because of the leadership skills I honed here. I was an active member of the student government and president of my sorority, Delta Gamma. It is because of opportunities like those that I’ve never been afraid to raise my hand. To step up. To give my viewpoint.”

This campus, my experience here, was critical in making me the type of leader that I am today

One of the state’s leading regulatory agencies, the Department of Commerce is focused on promoting the growth, success and safety of businesses in real estate, industrial compliance, securities, financial institutions, liquor control, medical marijuana, fire safety and unclaimed funds.

“I’ve been able to work with leaders on both sides of the aisle because I have not been afraid to speak my mind and speak the truth,” Maxfield said. “While I certainly held and continue to hold my own political beliefs, I never applied them to the workplace. I tried to refrain from partisanship in the workplace, instead my focus was being the best lawyer, the best manager and the best public servant I could be.”

In this time of political polarization, Maxfield said, “where individuals have very firmly held beliefs and we see the political strife around us, we need to talk more about common ground.

“An unwillingness to engage with people who have a different viewpoint than you will keep you from more in-depth conversations, it will keep you from real talk about what divides us and possibly prevent partnerships that could bring real change and opportunity in your life. Listen to the other person or try to find space for productive discussion and potentially some understanding.”

Maxfield told the candidates that as they move into the next phase of their lives, they should consider what finding common ground means, and how to accomplish doing that.

“Consider other viewpoints,” she said. “Not all your information should come from an echo chamber. If you are getting all your ideas on the news from one source, it will be difficult to fairly consider another’s viewpoint. Also, consider that the motivations and beliefs of others are as equally well-intentioned as your own.

“Remember that we live in a diverse society. You will not have to work hard to find people with a hundred viewpoints different from your own, but you may have to work a little harder to find what views those same people may have in common.

“A disagreement on one issue should not be an impediment to agreeing on other equally important issues. For your mental health, peace of mind and career success, I believe that you will be well served by looking for that common ground.”

During her career, Maxfield has been recognized by her colleagues for her professionalism and legal expertise. She received an AGO Professionalism Award in 1997 and in 1999 was the inaugural recipient of the Simon B. Karas Award for Outstanding Legal Contribution to the Attorney General’s Office.

In addition to her BGSU degree, Maxfield earned a law degree from the University of Toledo College of Law. She is married to lawyer Michael Maxfield.