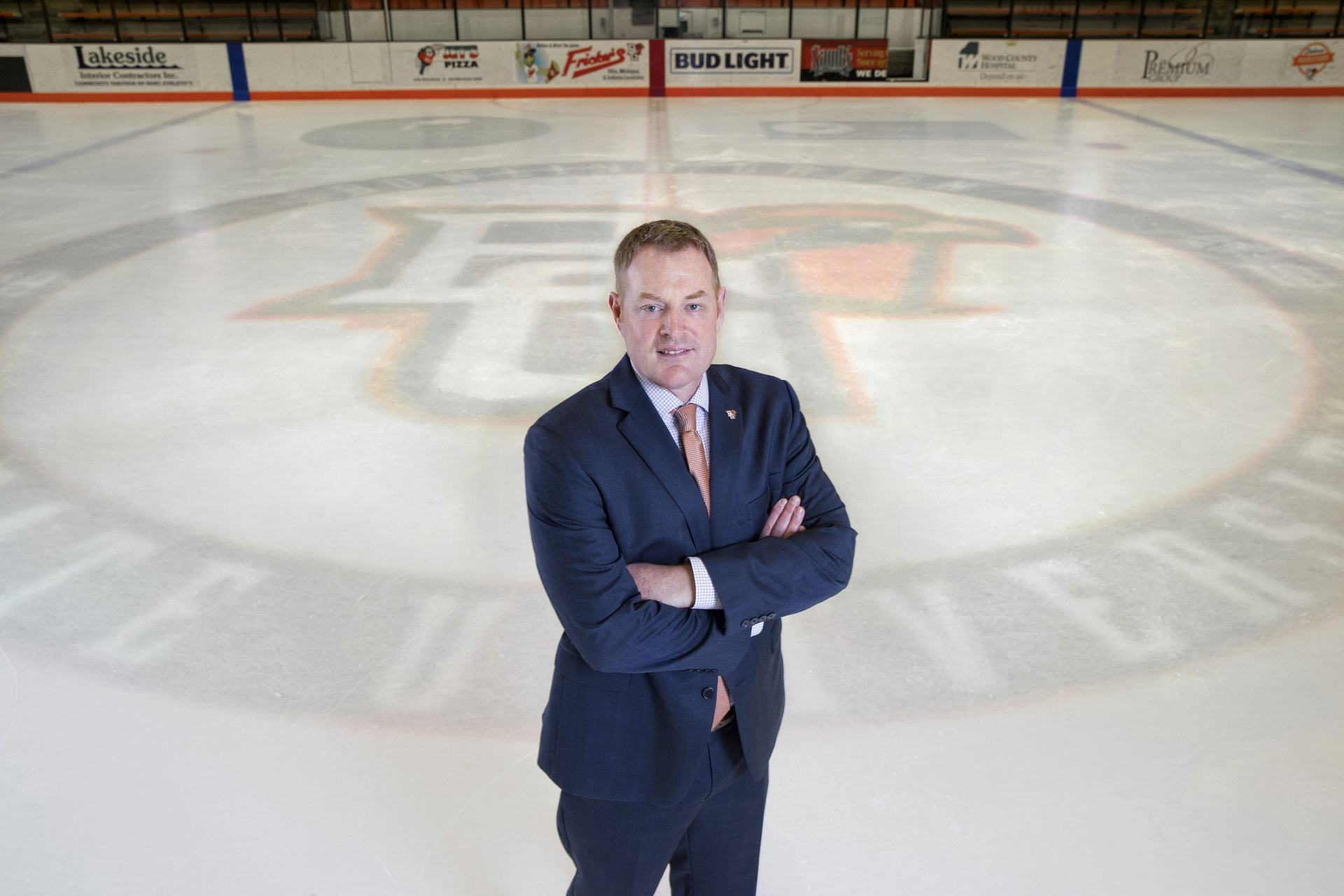 New Falcon Head Coach Ty Eigner knows the Bowling Green State University hockey program maybe better than anyone. For the last nine seasons, he was an assistant coach when the Falcons compiled a 171-154-44 record and returned to the NCAA Tournament this past March for the first time in 29 years. As a student-athlete, Eigner played in 123 hockey games for BGSU, and was the team captain for the 1992-93 season. Eigner was named head coach after Bergeron left to coach at Miami University. The season starts Oct. 6 at Miami, followed by the Ice Breaker Tournament on Oct. 11-12 at Huntington Center in Toledo.

Q. How did it feel to be named the head coach after being an assistant coach for nine seasons at BGSU?

A. It was an awesome feeling. It was something I’d hoped would someday happen, and ultimately, when BGSU Athletics Director Bob Moosbrugger offered me the position, I was ecstatic.

Q. I’m sure being a head coach has been something you’ve always dreamed about since you were a kid, and to be able to do that where you played college hockey has to be something special.

A. Personally, I feel great about the opportunity and, professionally, I am thrilled with where the program is at and who is involved in the program. It’s a really fun time right now for me. To build this program into what we’ve got going on now and now to be the head coach is something that I couldn’t be more excited about.

Q. What are the advantages of having the perspective of someone who has been here and helped rebuild the program, rather than bringing in someone from outside the program?

A. I think, when you’re in this business and there’s a coaching change, one of two things happens: There’s a change for a good reason and a change for a bad reason. This is a significantly different situation than we had nine years ago. We came into a program that wasn’t doing great, and now my staff and I, as a first-time head coach, are taking over a program that won 25 games and was in the NCAA Tournament for the first time in 29 years. Being familiar with what happens on this campus, both as a player and then as an assistant coach, and being familiar with the players in that locker room and how we operate within the confines of the Slater Family Ice Arena and our locker room, I think that’s a big plus for our program.

Q. What can fans, students and alumni expect from the team now that you’re the head coach? Will there be a noticeable difference from anything the team has done the last few years?

A. The on-ice product, I don’t think you’ll see any real significant difference. The way we play and the style we play and the identity we have as a program is one that I support 100 percent — that’s Bowling Green Hockey. We’re hard to play against, we skate really hard and we have a bunch of good players who work really hard and we’ll continue to do that. There will be some small changes, I think, and I’m excited to see how we can advance. We had a great year last year but no one was satisfied with just being in the tournament and losing in the first round, so, hopefully, we can add some things to the program that help us to continue to move forward because that’s everybody’s goal.

Q. Being an alumnus, does it give you greater insight to what the hockey program means to the University and its fan base?

Q. What kind of lessons did you learn from Jerry York when you were a player that you carry with you still today?

A. It was a unique experience to play for Jerry and then to be surrounded by some really great coaches and outstanding players. When I came here in the fall of 1988 from Minnesota, I’d never been to Ohio in my life. To see what his program stood for and how players operated, and where we were from a national perspective, it was a great experience. The one thing I took from Jerry is, he tried to do things the right way all the time and he cared for the players and the parents. When you dropped your son off here at Bowling Green his freshman year, parents trusted that their son was going to be taken care of. You have to be doing something incredibly well to be able to do it as long as Jerry has done it. And going into the Hall of Fame this year is an awesome thing for him personally but it’s also really cool for our program. He was a huge piece of the Bowling Green men’s hockey program.

Q. You were part of some NCAA teams as a player and then last year as one of the coaches. How important is it for the Falcons to be able to compete at that level?

A. When I walked on this campus as a freshman, the Falcons were in the middle of a four- or five-year run in the NCAA Tournament and had won a national championship, so that was the expectation. That’s all I really knew as a player, and for us to get back at that level, I was incredibly proud. To me, it’s just a great sense of pride to be in the national conversation and have those expectations, and I don’t think there’s anybody involved in the program today who doesn’t believe that’s exactly where Bowling Green belongs. That excites me because I believe that’s the standard that Bowling Green set in the past, and that’s one we’re going to keep.

Q. The Falcons start the season at Miami this year. How’s it going to be to face coach Bergeron?

A. It will be fun, but it’s Game 1 of 36. But, at the same time, it’s a unique situation and I’m going to try to enjoy it as best as I can. I think our players and everybody involved in our program is going to enjoy it, but, obviously, we’re not getting on the bus to drive to Oxford, Ohio, just to have fun. We’re going to do our best to try to win, for sure.

Q. Some of the best who have been associated with Bowling Green Hockey over the years had some really nice things to say about you when you were hired — among them York, George McPhee, Rob Blake and Nelson Emerson. They were happy you got the job and are looking forward to you carrying on the great hockey tradition at Bowling Green. How did that make you feel?

A. It’s really humbling. Obviously, those are guys who have had some of the best careers among coaches and players in hockey’s history. You talk about Rob Blake being an NHL Hall of Famer; and Jerry York now going into the Hall of Fame; and George McPhee having the career he had here: winning the Hobey Baker Award and then having great success as a general manager in the NHL; and Nelson Emerson being our all-time leading scorer and a three-time Hobey Baker candidate. If there is a Mount Rushmore of Bowling Green Hockey, those guys are on it. For them to say what they said about me is really humbling, and I certainly appreciate it.

Q. How does it feel to have the Bowling Green community and beyond supporting the program like it does?

A. It feels like it’s supposed to feel. I feel really fortunate to be sitting here and I can tell you that we’re going to do everything we can to continue to make people proud and continue to move this program forward and make it be the best possible hockey program we can have. That’s our goal.