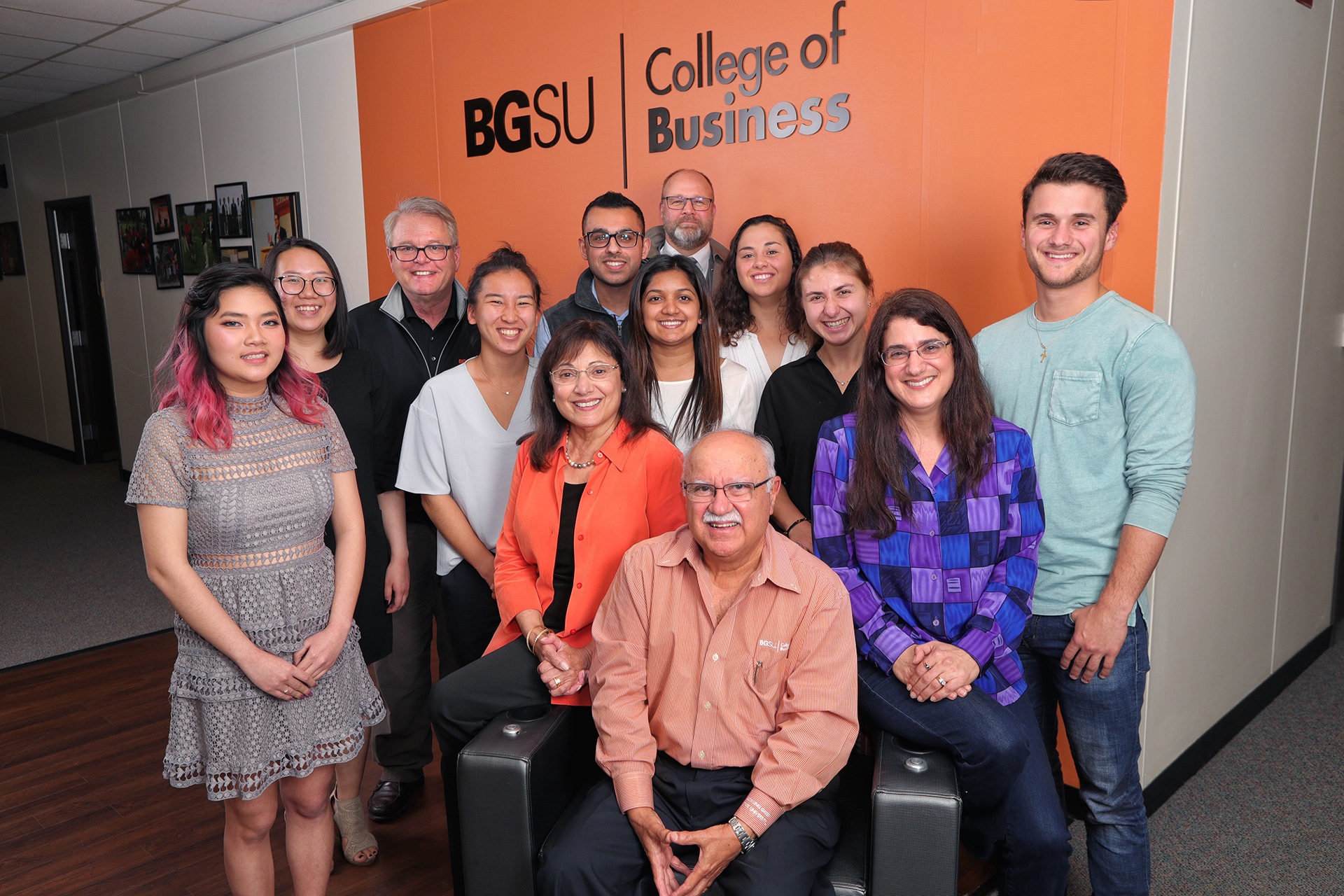 Talking with the Bhada family, it’s hard to imagine that they have overcome great odds in their lives. Their warmth, modesty and genuine kindness give no hint that they came to the United States from India more than 50 years ago with only a few dollars in their pockets and the goal of pursuing higher education at Bowling Green State University.

Today, Dr. Yezdi Bhada is retired from a prestigious career in academia and business, and Perviz from oncology nursing. To help pave the way for future students who aspire to a BGSU education, the Bhadas have endowed a scholarship for international graduate students in the College of Business to “help support the development of their academic foundation that will result in a successful career.”

The Y. and P. Bhada Scholarship is their way of “passing it forward,” the couple said.

“It’s been on our minds for years to do this,” Yezdi Badha said. “We wouldn’t be where we are today without BGSU. We received the blessing God has given us; we have to share it in some form with those at the top of our list. We experienced the generosity of spirit and goodness of folks here who shared so much of themselves and their lives with us. We strongly believe in the educational process.”

They returned to BGSU recently from their home in Florida to revisit the place that gave them their start in the U.S., bringing their daughter, Dianna Campbell, and grandson, Austin, to see their first home in America. Touring the campus, they were impressed with the amount of development that has happened over the past 50 years

“It has really blossomed,” Perviz said. “Before, it was a set of buildings; now it’s a campus.”

The Bhadas might never have made it to Bowling Green at all were it not for a series of fortunate events and the kindness shown them by others. After receiving his undergraduate degree in India, Yezdi visited the Information Services Office in Mumbai to search for U.S. universities with graduate programs in business. He applied to several programs and was accepted into many of them, but BGSU was the only university to offer him a stipend. That $125 a month made all the difference in assuring the U.S. government of his ability to be self-supporting. Dr. and Mrs. Booth of Elkhart, Indiana, who had met Yezdi while traveling in India and evidently saw potential in the young man, helped by sending references in his behalf.

But because of India’s severe foreign-exchange restrictions at that time on exchanging rupees for U.S. dollars, Yezdi was able to leave with just $57 to begin his graduate studies. What’s more, he and Perviz had only been married for 11 days when he left, and it was unclear whether she would be able to join him, even though he soon began earning additional money as a graduate assistant.

Luckily, fellow graduate student Keith Bandy agreed to serve as the guarantor for the couple’s financial support, and Perviz was granted permission to come to the U.S., but with even less money — a bare $8. She made the long flight alone, changing planes at New York’s bustling JFK Airport and arriving in Bowling Green in the dead of winter 1965, wearing only her sari while her luggage was delayed.

“I remember standing on top of the heat register, shivering,” she said. “I was probably more idealistic than realistic. I was excited but not fearful. Every step was going forward, both emotionally and mentally.”

In another act of kindness, the Bandy family also provided the couple their attic to live in. Perviz helped out as an au pair for the family while Yezdi studied and worked at the University. That summer, John Clark, a local school teacher, and his family offered the Bhadas their home to rent at a nominal price and even provided them an old DeSoto car to use.

Perviz said she still remembers the exact address of the house on Maple Street where they made their first home with their newborn son, Neville. The Booths again stepped in to help by giving the couple a typewriter, on which Perviz typed papers and theses for other students for 25 cents a page and a nickel a copy.

“It was practically an antique but it supported our livelihood in a way,” she said. Meanwhile, Yezdi served as a teaching assistant to earn more and worked for his Master of Business Administration degree program. The Bowling Green Exchange Club voted him the International Student of the Year.

Despite their challenges, the couple remembers this as a happy and exciting time in their young lives. They not only survived, they thrived.

“I embraced every aspect of American culture,” Perviz said. “Our philosophy was once you come here, you embrace it. We didn’t want one foot in America and one foot in India.”

In fact, Dianna and Austin said it was not until they visited India that they learned much about their parents’ homeland, and have always had trouble convincing people they are truly of Indian descent.

“I’ve had to actually show people photos of myself with our family in India,” said Austin, 19, a business and marketing student at the University of South Florida who has been inspired by his grandparents’ pursuit of excellence and love of learning. “I’ve been so lucky to have had the benefit of having my grandparents in my life. Thanks to them, I’ve been to South America, Europe, Asia. We all have the travel bug, but we believe in living small and traveling large.”

“We’d rather do than have,” his mother said.

Even after a lifetime of adventures and achievements, the Bhadas still remember all those in Bowling Green who showed them that “America is a land of good and caring people,” Yezdi said, including the late Drs. Edwin Bomeli, chair of the accounting department; Harvey Donley, his thesis adviser; Karl Rahdert, director of the MBA program; and Edward Schuck, international-student adviser.

After completing his MBA in one year, Yezdi went on to begin a Ph.D. program at the University of Florida, where Dianna was born and Perviz again employed her typing skills, as a secretary at a local office and assisting students (as well as typing her husband’s 300-page dissertation). After earning his doctorate in 1967, Yezdi was hired as an assistant professor of accounting at Ohio University, and his career began an upward trajectory of success that led the family to Georgia State University in Atlanta. By the age of 35, he was a tenured full professor. The couple reached another milestone that year when both became American citizens.

“It was one of the most memorable days of our lives,” they recalled.

Yezdi continued to excel in teaching, research and service and became a certified management accountant, receiving the Certificate for Distinguished Performance for achieving one of the top scores on the national exam. He was invited to be a visiting professor in the Harvard Business School Executive Development Initiative IMEDE (Institut pour l’Etude des Methodes de Direction de l‘Entreprise) in Lausanne, Switzerland.

“That was an adventure. I was 7 years old when we went and I became fluent in French,” said Dianna, who is now a professor of music and director of choral activities at Seminole State College in Florida. She served for two years as national college chair of the American Choral Directors Association and last year was invited to be a guest conductor at Carnegie Hall, her parents proudly pointed out.

When they returned to Atlanta from Switzerland, Perviz decided to pursue a degree in nursing.

“I was an adult student in my 30s,” she said, “but I had a very supportive husband and understanding kids.” Specializing in oncology, she had a special touch for assisting not only patients but their families as they coped with the illness, said her family. After a 30-year career, she retired in 2016.

Yezdi meanwhile found himself in growing demand for his expertise in the use of accounting information for effective decision-making, and conducted numerous professional- and executive-development programs across the U.S. and in several countries in Europe, Africa, the Middle East, Asia and Central and South America. He traveled frequently as a consultant to major corporations, banks, accounting firms, not-for-profit organizations and professional associations.

But his heart was still in teaching, and he spent the last 20 years of his academic career working to improve university teaching by devoting his research to educational methodologies for teaching business administration. He teamed with a colleague, Dr. Harvey Brightman. They received a grant to conduct a two-week program on best practices in university teaching that became the Georgia State University Master Teacher Program, which they conducted for 22 years for than 75 universities in the U.S. and abroad.

In 1992, Yezdi was appointed associate dean for academic programs in the Robinson School of Business at Georgia State, where his responsibilities included management of the MBA, executive MBA and doctoral programs. He convinced U.S. News and World Report to include a part-time MBA ranking, and Georgia State then was ranked as high as fifth in the nation. He then was named associate provost for academic services and initiated a number of campus resources, including the Student Advisement Center and the Center for Teaching and Learning. After his retirement in 2000, he continued to serve GSU as a consultant for many years, while also presenting programs on improving faculty teaching, including long-term work with Case Western University’s Weatherhead School of Business.

He and Perviz are proud that both their children have earned graduate degrees and have successful careers, and are looking forward to seeing Austin do the same. As Yezdi said, their scholarship at BGSU is “a small way we can express our gratitude to BGSU for planting the seeds that helped us grow.”

“Now it’s time to take those seeds and scatter them,” Perviz said.