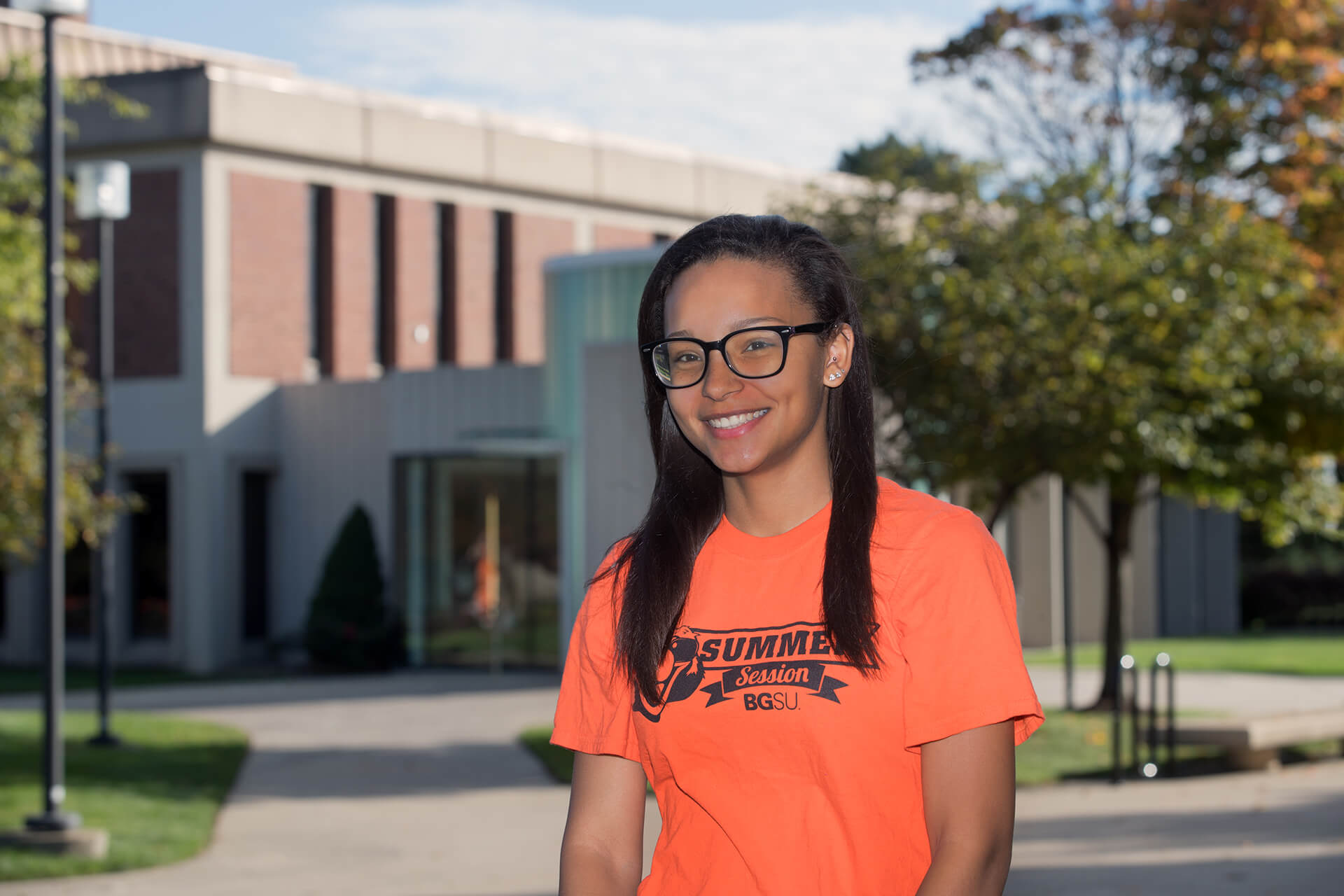 Jayda Jackson serves as mentor, motivational speaker to her peers

Passionate is the best way to describe Jayda Jackson. Serving as a mentor and motivational speaker to hundreds of young people is just one of the ways she connects with the community.

“I believe that I can serve as an advocate to students who have been bullied, underprivileged students, mothers who need motivation, non-traditional students and so much more,” Jackson said.

Jackson, a Sandusky, Ohio, native and chemistry major at BGSU Firelands is graduating with an Associate of Science degree. Her journey with BGSU, however, does not end here. Jackson holds a 3.77 GPA as she continues to work for her bachelor degree.

Jackson is a first-generation college student who knows the importance education has on changing one’s circumstances.

“College has always been a top priority,” she said. “Growing up, my mother was a single parent of five kids and we experienced many hard times. Because of this, I knew I wanted a better life for myself.”

Transitioning from high school, where she was a four-sport scholar athlete, Jackson initially began her collegiate career in the Schreyer Honors College at Penn State University. Jackson was one of 300 students accepted into this elite program which receives thousands of applications each year.

“Considering that I am the first person in my family to go to college, this was the best news of my life at the time,” Jackson said.

Two months into her studies, however, Jackson learned she was pregnant with her first child.

“I knew I would not be capable of having a healthy pregnancy on campus, so I decided to go home,” she said.

Jackson returned to Sandusky to be with her family, but she knew this would not be the end of her academic career.

“The semester after I had my son, I enrolled at BGSU Firelands,” she said. “This campus saved my future. If Firelands had not been so convenient and welcoming to me as a young, single mother, I honestly do not know where I would be today.”

This was an experience Jackson never thought she would have.

“As an alumna of Firelands, I will make sure to inform those I mentor of the wonderful benefits and experiences of this regional campus,” she said.

Jackson’s passion extends beyond the university setting and into the community. She is a motivational speaker in the Sandusky area, where she presents on issues of anti-bullying, discrimination and perseverance.

“I’ve been through many experiences in my life that have attempted to hold me back, and I am living proof that you can achieve whatever you put your mind to,” she said. “You just have to want it enough.”

Jackson has partnered with the Board of Education for Sandusky City Schools, which has appointed her in the role of “Success Coach Coordinator.” In this role, Jackson hopes to share her stories and successes with each school in the district by the end of the school year.

“If I can reach even just one student from every school, then I am satisfied with my work,” she said.

In addition to her motivational work in the public school system, Jackson is president of the Science Club at BGSU Firelands, a volunteer for Old Woman Creek National Estuarine Research Reserve, and has even designed and taught a chemistry lab for gifted sixth grade students.

“My involvement with the community has impacted my education by motivating me to succeed,” Jackson said. “When a busy semester has me feeling overwhelmed, I make sure to continue to strive because I know that I am setting an example for other young leaders.”

Carrying these heavy responsibilities is something Jackson does with pride.

“From having to step up at a young age to help support my family, I am now better able to manage being a full-time student, single parent and part-time worker,” she said. “It definitely gets exhausting at times, but I know that I am working so hard to give my son the life I never had. Juggling school, work and my personal life is worth every bit of the future outcome.”

Jackson is sure to mention that her dedication would not be possible without a few key sources of support.

“I cannot even begin to express how thankful I am for my scholarship donors,” she said. “I was able to complete my first two years without having to pay anything out of pocket. It is such a great feeling knowing that there are people who genuinely care about my future and success.”

Jackson also is appreciative of BGSU faculty and staff.

“There is no doubt that Dr. Subha Nagarajan (chemistry instructor) has been the most helpful professor and mentor,” she said. “Not only did she inspire me to pursue chemistry, Dr. Subha immediately made me feel welcomed as a student, mother and leader.”

Jackson also thanked Stacey Hartley, senior director of development at BGSU Firelands, who has been “a great mentor” whose “hard work and genuine care for students does not go unnoticed.”

Fulfilling the motto of BGSU, Jackson found that she truly belonged at Firelands.

“It’s nice that bigger colleges are more ‘well-known,’ but you cannot get that one-on-one experience with such great faculty and staff like you can here,” she said. “I was able to continue my education because of BGSU Firelands, and I will never forget that.”