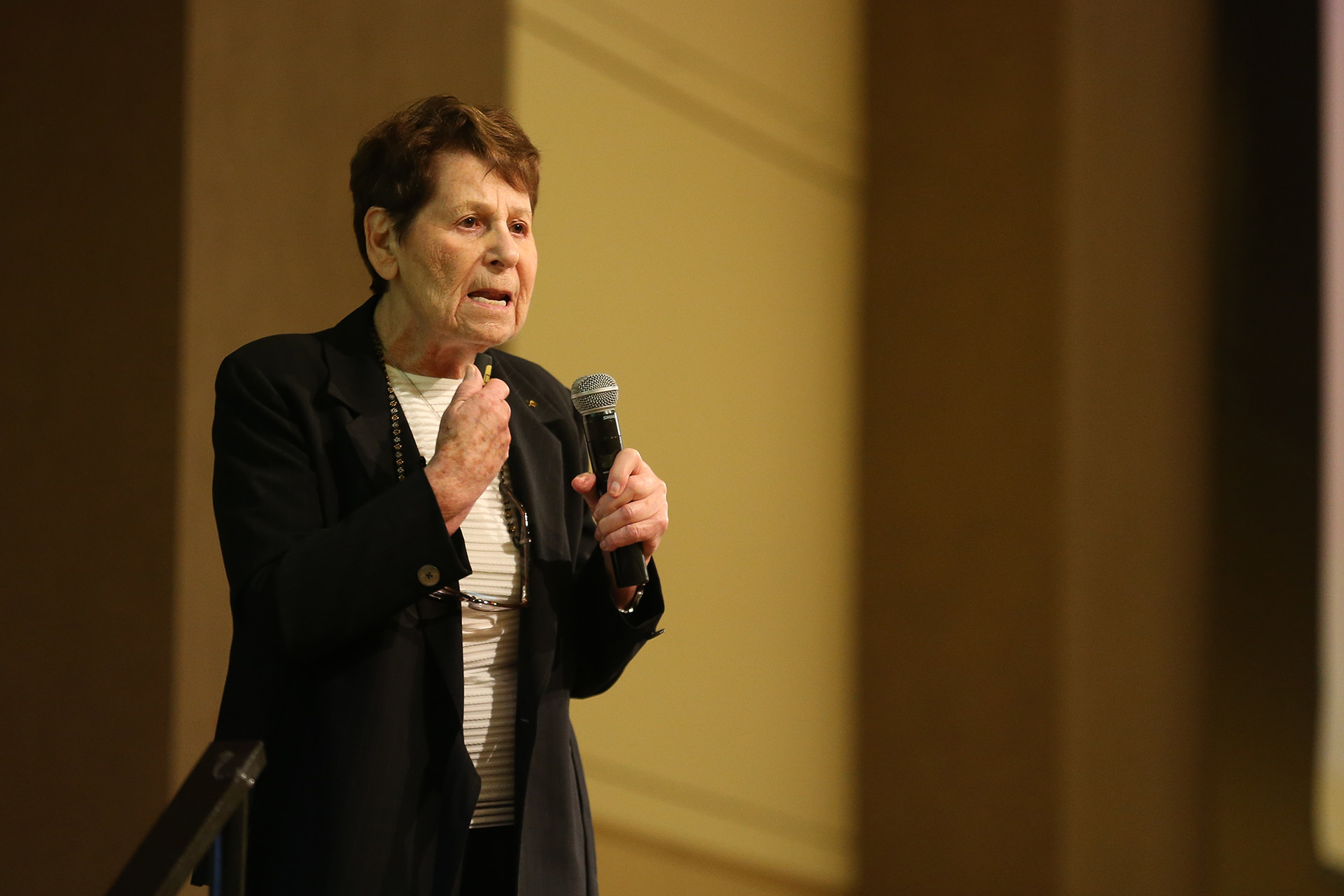 “I want the children to be more aware of what they were doing to one another. That is one of the reasons I’m speaking out, not to tell my story. I really don’t want you to feel any pity for me; I am the lucky one. I am the one that survived when thousands of children did not.”

Holocaust survivor Erna Gorman delivered a powerful and touching message to the Bowling Green State University community on April 15 in a talk hosted by BGSU Hillel and the Office of Multicultural Affairs. Gorman received two standing ovations during her speech about her life story, held in the Lenhart Grand Ballroom in the Bowen-Thompson Student Union.

For the last seven years, BGSU Hillel and the Office of Multicultural Affairs have co-sponsored a Holocaust speaker event in the spring semester.

“We’ve had numerous Holocaust speakers here before, and her story stuck out to us because she is a hidden-child speaker,” BGSU Hillel Chair Rachel Feldman said. “We have not had that kind of perspective in the last four years at this event.”

Gorman said she had spent 40 years of her life ignoring her painful Holocaust memories, but she decided to start speaking once she realized that the skinhead movement was a threat to her country, the United States.

The 85-year-old survivor insisted that the audience not bother calculating her age because she “is 29.” Her humor and comical remarks throughout the evening elicited deep laughs across the rows of seating in front of her. She had a slideshow prepared with pictures to accompany her story, which enriched her comedic approach as she struggled to work the presentation remote device.

As Gorman went deep into her childhood experience, the air in the room turned thick with muffled tears and students leaning in toward the stage to hear her every word. She became very serious once she got to the most difficult parts of her experience.

“I joke a little bit, but the truth of the matter is that my tummy is in knots now,” she said.

As a “hidden child,” Gorman spent more than 18 months hiding in a Ukrainian farmer’s barn loft with her parents and her older sister. Before that, she had already felt the pain of extreme loss.

“My mother’s family were made to strip and were shot in a mass grave,” Gorman said. “The able-bodied, including my father, were made to cover the grave.”

Gorman described the barn loft as straw-filled, cramped and teeming with vermin. The farmer did not share their location with his family for safety reasons, and Gorman said she could hear the sounds of his carefree children playing outside. She wore the same clothes every day and suffered intense welts and afflictions from the louses and lice that lived in her pores.

Her muscles had atrophied and she eventually had to be carried out of the barn. Gorman said that by the time she left that place, she was no longer a human being.

“I don’t know why we survived. I think that when you are meant to survive, things just happen,” she said.

She watched from the hospital bedside as her mother died from wounds inflicted by bomb shrapnel. Following the end of the Holocaust, Gorman was sent back to Metz, France, with her father and sister. She started her first job at age 11 and she feared going to school.

“They put me in the first grade and I didn’t know one plus one,” she said. “All these children knew more than I did and I didn’t even know how to brush my teeth.”

She did not go to school because the French girls there would bully her for the large lesion she had on the back of her head as a result of her encounters with vermin and poor hygiene.

After Gorman finished her story, there was a brief open-question session in which audience members were able to talk to her one-on-one. A student tearfully asked her about handling religious oppression. She answered, “I think everyone should be able to practice their own religions safely and freely.”

Once the ballroom cleared and the last few attendees got to hug Gorman and thank her for her strength, members of Hillel held a separate reflection session with her to learn more about her on a personal level and reflect on the evening’s events.