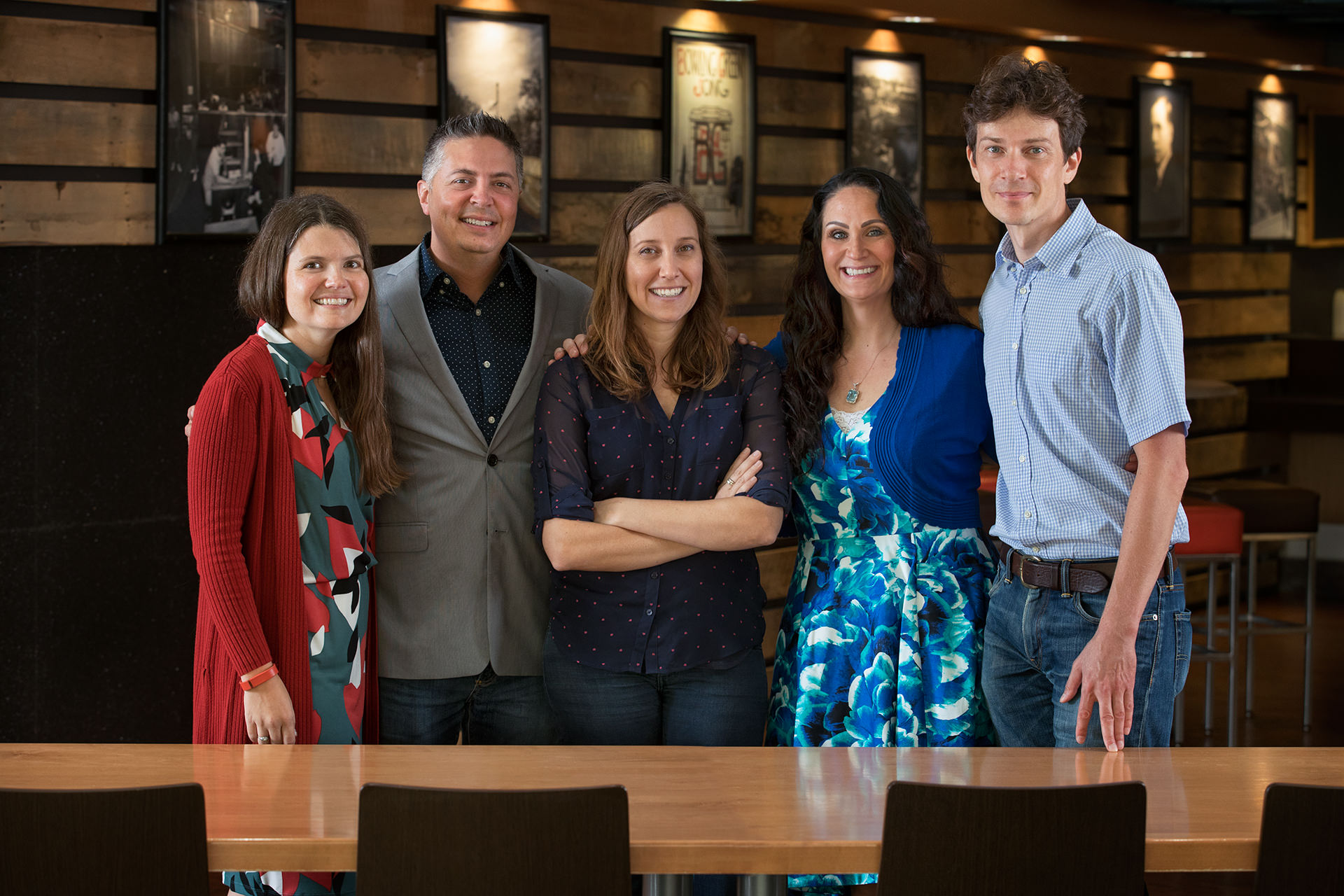 Group's special bond has played a role in their academic, personal success

At the Faculty Excellence Awards in April, spirits were high as Bowling Green State University celebrated the accomplishments of its faculty. Among the attendees was a small group who seemed especially close-knit, beaming with pleasure at one another’s recognition. Academically, they are all over the map, from conservation ecology to photochemical sciences to food and nutrition to visual communication technology and physics. Serious scholars, they are among the University’s most outstanding young faculty.

But when this group of friends gets together for “Nerd Night,” it’s all about their special camaraderie and mutual support.

Their bond of friendship has played a role in their academic and personal success, said Drs. Mary-Jon Ludy (“MJ” to her friends), food and nutrition; Alexis Ostrowski, chemistry; Shannon Pelini, biological sciences; Jerry Schnepp, visual communication technology; and Alexey Zayak, physics. Since joining the University, they have helped one another navigate the complex system of academia. Their conversations have also led to some opportunities for other faculty, such as a learning community focused on effective time management skills and tools that also benefit students.

All have successfully mounted the tenure and promotion ladder to the level of associate professor, the first hurdle in a faculty member’s academic career, and have cheered on one another’s achievements.

Ludy, a 2002 BGSU alumna, is an expert on the role of sensory perception in dietary habits and its relation to weight management. Her work has been featured on CNN and in multiple scientific and popular publications; she was recently selected as the 2018 Member of the Year by the Research Dietetic Practice Group of the Academy of Nutrition and Dietetics, where she has been very active in leadership roles.

Ostrowski was named among 15 “Emerging Investigators in Inorganic Photochemistry and Photophysics” by the American Chemical Society in 2016. She was selected last year for a National Science Foundation Faculty Early Career Development Award for her research in “Controlling Mechanical Properties of Materials Using Photoactive Metal Coordination Bonds.” And the Herman Frasch Foundation for Chemical Research granted her $250,000 over five years to study “Biodegradable, Photoresponsive Hydrogels for Controlled Application of Nutrient Fertilizers.” BGSU presented her the 2018 Outstanding Early Career Award.

Pelini’s groundbreaking research into forest ants’ role as a barometer of climate change was published in the journal Science Advances and received wide attention in other publications. As a postdoctoral researcher at Harvard University, she collaborated on a long-term study funded by the U.S. Department of Energy Program for Ecosystem Research and the National Science Foundation.

Schnepp is director of the Collab Lab, a resource for collaboration among students, faculty, staff and community members. An expert in human-computer interaction, which involves psychology, art and technology, he has brought his skills to help a variety of people communicate in a variety of ways. When he came to BGSU from DePaul University in Chicago, he was collaborating on creating an application for smartphones that translated phrases into American Sign Language. At BGSU, he has taught coding to humanities faculty and graduate students to open new research avenues for them through digital scholarship, and now at the Collab Lab, he facilitates the connection of faculty and others from different disciplines, using the principles of Design Thinking.

“I think I landed in the Collab Lab because I tend to connect people, to put people together,” he said.

Both he and Ludy were recipients of the 2018 Elliot L. Blinn Award for Faculty-Undergraduate Student Innovative Basic Research/Creative Work Award. Like the rest of the group, they are highly committed to supporting and promoting their students’ success and believe that engaging them in research nurtures transformative learning.

At the awards ceremony, Ludy described herself as a “forever Falcon” and expressed her gratitude to the University for giving her, a student from a rural town in Appalachian Ohio, the opportunity of higher education.

Everyone in the group met at New Faculty Orientation in 2012, except for Ludy, who had joined BGSU the previous year. She got to know them at a grant-writing workshop, and as they chatted she was amazed to hear about the connection they had formed.

“When they told me they had this group, I said, ‘What? Can I join?’” she said. “Usually in life, you go through different stages with a cohort, from high school and even to graduate school. But when you come to work at a university, you’re more separated into your department. I was the first new tenure-track food and nutrition faculty member in 15 years, so there was no one else in my situation.”

“At new faculty orientation, everyone was really self-conscious and all business and very proper,” Schnepp said. “Our conversation was very formal, like, ‘Tell me about your research and what you do.’ We talked all day, and somewhere toward the end of the day said we should go out for a drink sometime. We did that and finally at some point we relaxed and starting talking about more personal things. From there, we became close friends and a support system for one another.”

They began having regular Wednesday night get-togethers in downtown Bowling Green, where they could share stories about the trials and tribulations of faculty life, what they had learned so far and solutions they had found to common problems and situations. They began to refer to their meetings as “Nerd Night” because, as Schnepp said, “It would always tend to be kind of ‘heady.’ We would be drinking and laughing but still the conversation would be around something that we’d wind up saying, ‘Oh, we should do a study on that.’ We can’t get away from wanting a study.”

Hearing the friends’ boisterous interaction immediately breaks down any illusion about the stereotype of the ivory tower. And, despite their disparate disciplines, they agreed that they share some personality traits.

“We’re all playful,” Pelini said. “We all appreciate a good joke. Plus, we’re all good listeners and we care about each other and care about helping each other. We’re serious academics but we can joke about things.

“And MJ and I have had extensive conversations about glitter,” she deadpanned as she and Ludy displayed their sparkly nail polish.

The group has also spawned connections outside its members, such as when Ostrowski mentioned a new scientific instrument she had gotten, which sparked a comment from Ludy about a colleague in her department, who is now collaborating with Ostrowski.

Nerd Night and the mutual support of the group proved a lifesaver, Ludy said. “It’s all about work-life balance. I came here with a 6-week-old baby, and it was just survival mode.”

“We came at different life points,” Ostrowski said. “I was single. Alexey was married, but his wife was still finishing her Ph.D. in Texas, so he was dealing with a long-distance marriage and trying to adjust to his job here.”

“Starting this job was very exciting, but also somewhat lonely, because we had to face challenges and make a lot of decisions by ourselves, most of the time not confidently at all,” Zayak said. “Finding our group of ‘nerds’ felt like meeting playmates in a sandbox. We still play our own games with the sand, but we communicate, observe, learn from each other and share ideas, and all that with a glass of beer — exactly what I needed to deal with the professional loneliness."

“As a probationary faculty member, the work you put in is life-engulfing. In the beginning, there’s so much work to do you could spend all day every day just doing it,” Ostrowski said.

“Having other people reminding you, when the work is life-engulfing, that you have to set boundaries is so important,” said Pelini, whose son was 18 months old when she became a BGSU faculty member.

“It helped to give us permission to step away from our work for a little bit and just breathe and not think about work for a minute,” Schnepp said.

Because faculty are not born knowing how to organize or teach classes or write grant proposals or deal with difficult students or set up a lab, they must learn all that, while also teaching and keeping up with their myriad other duties. Although several of the Nerd Night group have parents who are teachers, none grew up planning to become or had a role model for being a university professor, they said.

To most people, Ostrowski’s explorations into the potential of using natural polymers that are waste products to create hydrogels that respond to light in specific ways would be a daunting thing, but it was the more basic parts of her job that were the most intimidating for her.

“When you first start out, you can’t delegate to anybody,” she said. “You have questions like what do I order, what will the students need? Where do I order from? What budget do you use? I remember thinking when I started that instead of what will my research questions be, these were the harder decisions you make every day.”

“Out of a conversation came the question: How do people do this and keep this up? Is there a way to make life easier and be more efficient, a tool we could use?” Schnepp said. “Now MJ and I have done presentations on organizing your time and better time management and helping students do that, too. The learning community came out of Nerd Night.”

The friends’ discussions also went deeper, into important questions about teaching itself and the role of faculty.

“We talk a lot about pedagogy,” Schnepp said.

“It took me a long time to realize that by being a faculty member, you are a public figure and a public servant,” Pelini said. “And so your actions are impactful, whether you recognize it in that moment or not. It’s nice to bounce ideas off of friends and colleagues to help reflect on what actions will make a good impact versus bad.”

Being in different departments actually has its advantages when it comes to discussing work situations, they said, because it allows objectivity.

“It’s nice because you don’t know the politics or the personalities and you can provide advice without that background,” Ostrowski said. “We also help each other with our individual expertise, like when Alexey is writing a grant proposal and he asks me, ‘As a chemist, does this language make you cringe?’ You also have a lot of questions about what happens when you have problems with a student. What do you do if a student comes to you with a problem?”

“I’ll never forget the day MJ said, ‘I have walked students over to the Counseling Center when there’s a need,’” Pelini said. “And I was grateful, knowing you were that strong to do that. It took hearing it from another faculty member to know it was a good thing to do and it was OK.”

Now that the friends have settled into their academic lives, “Regular meetings have gotten harder, but the support piece has not changed,” Schnepp said. “It’s been a tremendous confidence booster. I think the message is: Put forth the initiative to strike up conversation with people and ask them to get together; you’ll find yourself with a really great group of friends.”