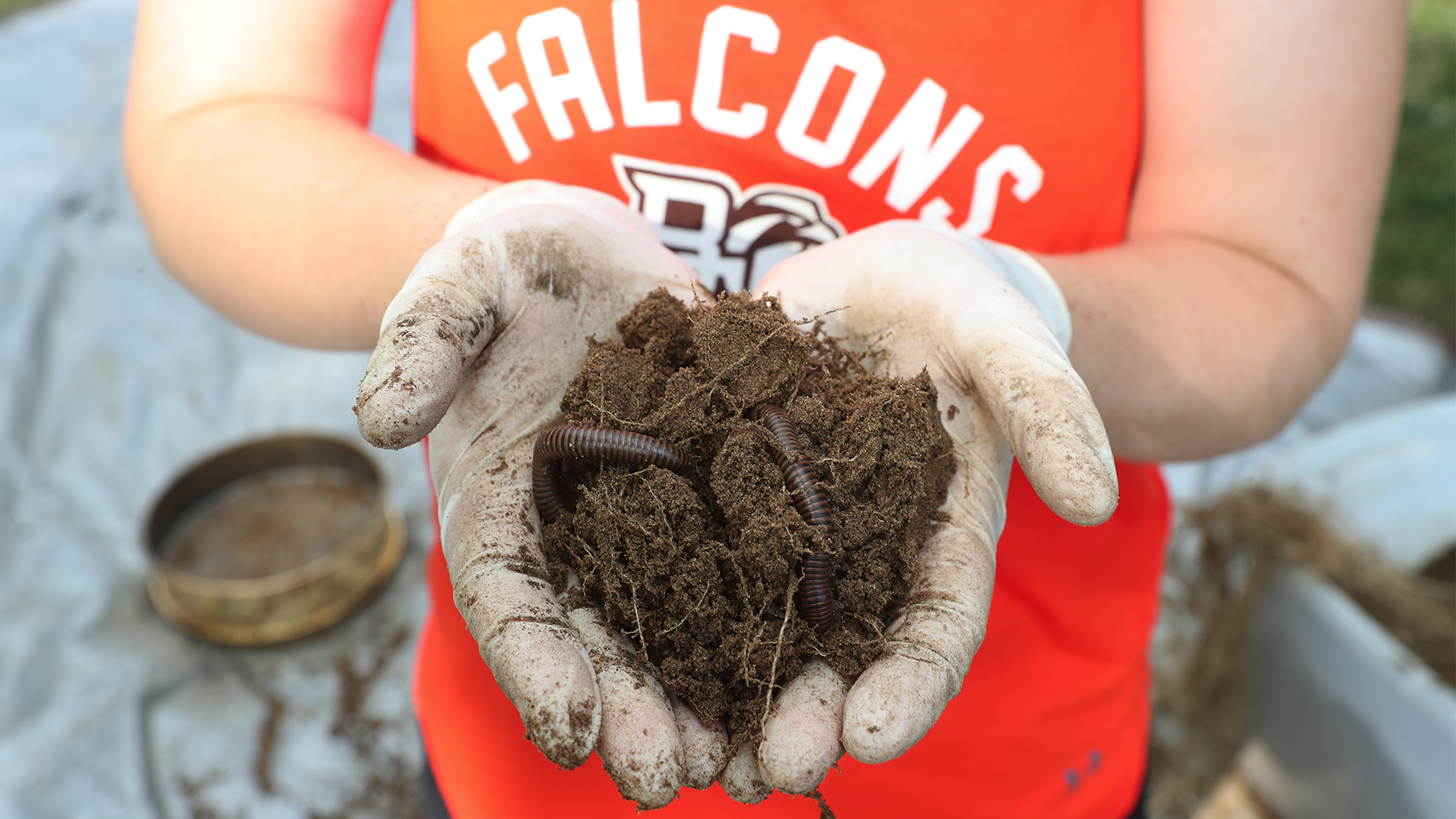 Bowling Green State University graduate student Josephine Lindsey-Robbins is researching the role of “bugs” in composting dead plant material, turning it back into the soil and keeping its nitrogen and phosphorus in place. There, it can fertilize the soil instead of washing into lakes.

BGSU’s Josephine Lindsey-Robbins is in a battle to keep nitrogen, phosphorous out of freshwater lakes

Bowling Green State University graduate student Josephine Lindsey-Robbins is researching the role of “bugs” in composting dead plant material, turning it back into the soil and keeping its nitrogen and phosphorus in place. There, it can fertilize the soil instead of washing into lakes.

In the battle to keep algae-producing nutrients such as nitrogen and phosphorous out of freshwater lakes, there might be some tiny allies living right in the farm fields. Agriculture is recognized as a leading contributor to harmful algal blooms (HABs), which occur around the world.

Bowling Green State University graduate student Josephine Lindsey-Robbins is researching the role of earthworms, pill bugs and millipedes in composting dead plant material, turning it back into the soil and keeping its nitrogen and phosphorus in place. There, it can fertilize the soil instead of washing into lakes, where instead it feeds the algae that can turn toxic under the right conditions.

Toledo has experienced the effects of these HABs, including the 2014 crisis in which the municipal water supply was temporarily shut down due to a HAB in Lake Erie. The National Oceanic and Atmospheric Administration reported that 2017 was the fourth worst algal bloom season in history for the lake, and with climate change, increased precipitation could worsen the input of phosphorus. 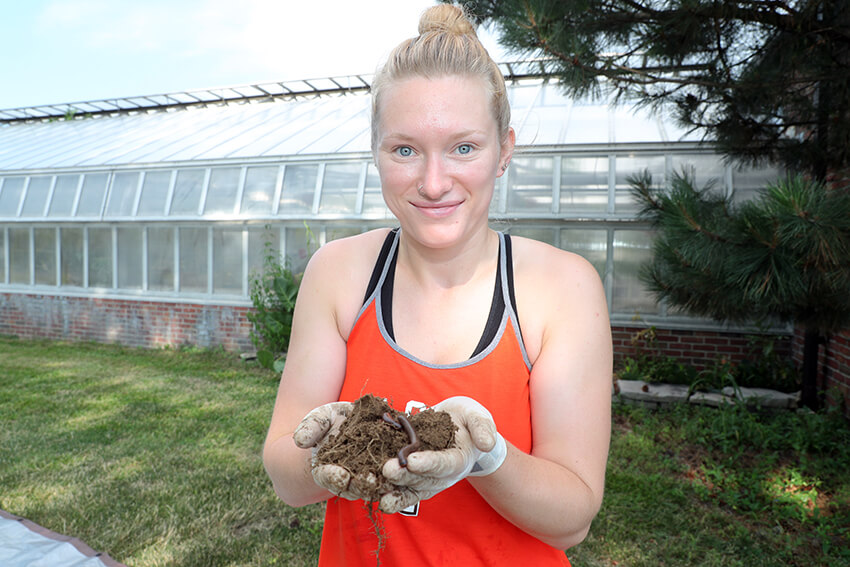 The research of Lindsey-Robbins, a biology major specializing in ecology and conservation, could encourage farmers to change their management practices to protect and encourage these common macroinvertebrates to increase their abundance. They might use less tillage and fewer herbicides and pesticides, for example, to encourage them to colonize their fields, or perhaps even add them to the soil. If Lindsey-Robbins’ theory turns out to be correct, not only would it benefit the lake but also agricultural productivity.

“My study will serve as one of the first steps in taking advantage of soil invertebrate action to preserve freshwater ecosystems and protect the valuable services they provide,” said Lindsey-Robbins, who came to BGSU for her graduate degree after working with Dr. Shannon Pelini, BGSU associate professor of biology, in the federally funded Research Experience for Undergraduates summer program while she was a junior at Beloit College. Her BGSU master’s project is an outgrowth of a study they did on how rain patterns affect nutrient cycling.

“I brought a piece of that study here,” Lindsey-Robbins said.

The earthworms, pill bugs and millipedes she informally refers to as bugs are known as detritivores for their consumption of detritus.

“I specifically chose species farmers wouldn’t mind having in their fields,” she said. “They’re not pests, they don’t eat their plants, and they’re really important in the decomposition process. They eat dead wood, leaves and plants and they’re the first step in the shredding process for the dead plant matter. What’s in those dead leaves are nutrients that would help increase the fertility of the soil and the crop yields.”

The industrious detritivores work at different levels of the soil system.

“The earthworms go deep, the millipedes burrow about five inches down and the pill bugs stay on the surface,” she said.

For her master’s thesis on “Using Soil Macroinvertebrate Abundance to Manage Phosphorus Leaching in Agricultural Soil and Prevent Eutrophication in Lake Erie,” Lindsey-Robbins posed two questions: whether an abundance of detritivores enhances the availability of phosphorus in the soil and decreases its leaching, and whether the detritivores can buffer the effects of increased precipitation on phosphorus mobilization and leaching. Besides phosphorous, among her numerous other measurements were the total biomass of the corn and — very important — nitrogen levels, which contribute to algae’s turning toxic.

Eutrophication occurs when a body of water becomes overly enriched with minerals and nutrients that induce excessive growth of plants and algae, which can also create “dead zones” by depleting the water’s oxygen level when they die and sink to the bottom. This contributes to the development of HABs.

In the war against toxic algae, farmers’ interests often seem to opposed to water quality concerns. Lindsey-Robbins hopes her findings will point to a way to benefit both. 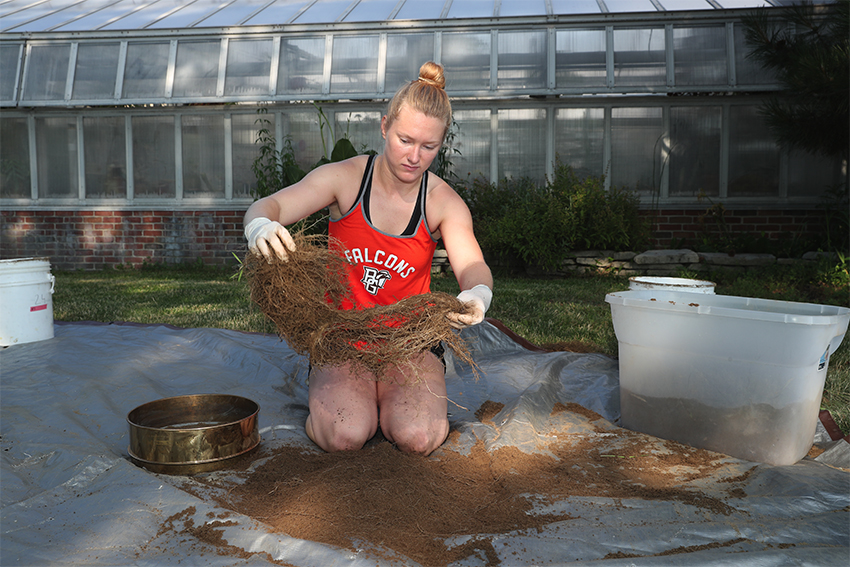 Displaying a graph on her computer, Lindsey-Robbins said, “One interesting thing I found that I wasn’t expecting at all was that the number of weeds seemed to be related to the number of bugs in each bucket. I started out with zero. When I cut down the corn, I counted the total number of weeds in each bucket. The buckets with no bugs had the most weeds, and the buckets with the most bugs had the fewest weeds. It was a very clear trend.

Working seven days a week, Lindsey-Robbins spent the hot early summer weeks in the biology greenhouse, where she had 30 deep buckets filled with soil from a local farmer’s field and planted with organic field corn. Each bucket had from zero to four of each species of detritivore. A control group had no bugs, making five levels of abundance in all. Every day, she used ultrapure water from a lab to eliminate any chlorine, and adjusted the water’s electrical conductivity, or the amount of salt in it, and the PH of the water to mimic rainwater and mirror a living system.

Half the buckets received the equivalent of average rainfall; the other half received elevated precipitation of 20 percent above average. In addition, all the buckets experienced evenly spaced “storms,” when Lindsey-Robbins and her team of volunteers would water the buckets in three rounds over the course of an hour to mimic the way in which rainstorms typically occur in this area. 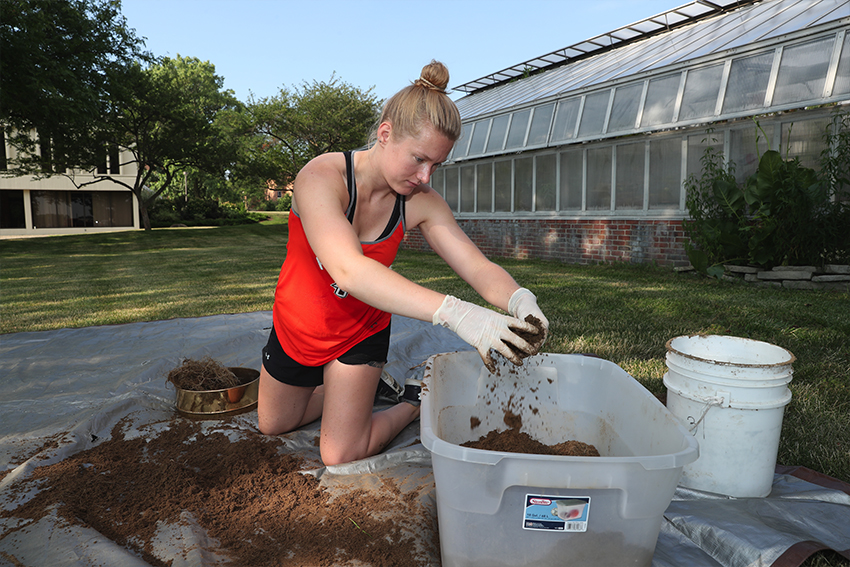 Undergraduates and other graduate students pitched in to help with the watering. She also received significant assistance from other areas of the University in terms of lab work and analysis. Helping with some of the technical parts of the process were those with “the machines and knowledge to run samples,” Lindsey-Robbins said.

Twenty-four hours after each storm, Lindsey-Robbins collected the leachate, the water that ran out the bottoms of the buckets. The goal was to measure the total dissolved nutrients in that leachate, which in nature would run off into the groundwater and into the lake, to see how much phosphorus and nitrogen, along with other nutrients, it contained.

Beth Ash, project manager in the Watershed Research Lab of Bob Midden, measured the total and dissolved nutrients in the leachate. Angelica Vazquez Ortega, a BGSU assistant professor in the School of Earth, Environment and Society, measured how much organic carbon was present in the leachate as another indicator of nutrient cycling. Carbon can indicate how much decomposition is taking place.

The next step after cutting down the corn on July 8 was to empty the buckets and count the number of pill bugs, millipedes and earthworms. Back in the lab, Lindsey-Robbins then measured the dry weight of the bugs and the weight of the corn biomass, both aboveground and below ground.

“I also want to measure the amount of nutrients in the soil, in the corn and in the bugs,” she said. “Basically, I want to map out where these nutrients are in each system in these buckets. It all goes back to making the field a whole ecosystem again.

“Not only will this project expand our knowledge on the role of species abundance in nutrient cycling, but it may lead to future studies that determine how to increase macroinvertebrate abundance within agricultural soil.”