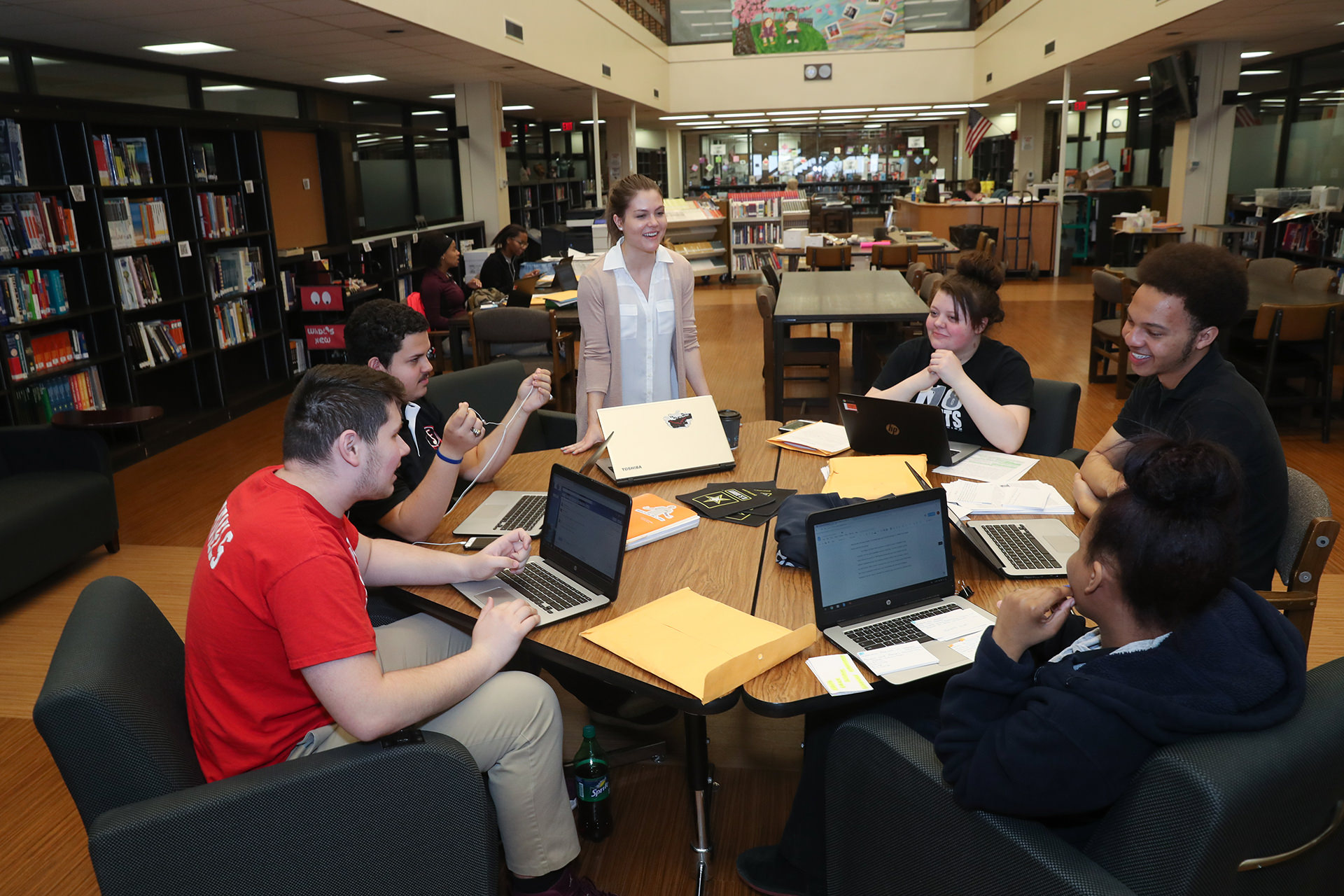 Teaching a love of learning at BGSU

Kinsey Smith’s task as a student teacher, one sunny morning at Fostoria High School, was to help seniors with their term papers. But the task became richer.

Instead of just working through the mechanics of the assignment, Smith asked her students what inspired their topic, and she listened as they talked about their past struggles and their future concerns. Then she helped them blend all of it into their assignments.

It looked effortless, but she said it came from her own struggles and a drive to help other people as they had helped her.

“I didn’t always know that I wanted to be a teacher,” said Smith, who is graduating with a Bachelor of Science, “but I love helping people and I knew that I wanted to work with people.” A summer spent as an assistant camp counselor made teaching “just feel right.”

When she transferred to Bowling Green State University from Ohio University, she knew that BGSU had a strong education program and that it would enable her to be closer to her family in northwest Ohio as well as continue the community gymnastics coaching she enjoyed. But in the end, “BGSU just felt like the best option for me – and it has been.”

Her decision to specialize in Adolescence to Young Adult Integrated Language Arts came from an experience that did not always feel like the best option.

“Even though I loved English – as a kid I came up with my own research projects outside class – inside the classroom, it was something I struggled with. It was frustrating for me, and I didn’t feel like my written work was good enough.”

It was one of her Archbold High School teachers, Mr. Throne, who helped her work through those challenges.

“He’s amazing." she said. "He helped me realize the value of writing, and he made me love writing. Mr. Throne pushed me further than I thought I could go and he really inspired me to keep going.”

Her feeling of not being “good enough,” though, was an issue that continued into her education at BGSU.

Working in a classroom environment, “best” is subjective. Even though she took a long time to develop lesson plans, for example, she realized that she would still need to revise them depending on her students’ needs and progress.

“At first, it bothered me when I had to change my lesson plans; I took it personally, like I hadn’t done a good enough job," she said. "It was really hard for me to accept that it’s OK to not be perfect, and things change.”

She credited Dr. Joanna Weaver, assistant professor of education in the School of Teaching and Learning, with helping adapt to classroom needs.

“She’s had such a significant impact on me," Smith said. "When I felt like I wanted to give up, she believed in me. She believes in all her students and believes that we can and will be successful.”

As Smith’s confidence grew, she tried new experiences, like a new Mentor Match program within the college.

“The purpose is ‘to provide advice, support and guidance from a peer who’s been there to a peer who’s going through it,’" she said. "Right now, we’re testing it out with AYA ILA majors; we hope to expand to other content areas next year. I helped start it because I believe so strongly in the power of relationship, and there is so much research about the value of mentorship.”

One of her biggest life-changing ventures at BGSU, though, was the six-week summer program she joined in Slovenia as a member of Cru. That experience, combined with additional time in Austria and Italy, started her thinking about teaching in a foreign culture.

“I knew that I wanted to work where there was a high need, and through the TEACH grant I was already committed to working at a low-income school,” she said. “But I also really wanted that experience of teaching overseas.”

Her Cru connections led her to Grace International School in Chiang Mai, Thailand. The K-12 school offers Christian education for children of international workers in Southeast Asia. She researched GIS, contacted the staff there, and committed to a two-year teaching position.

“I leave this summer, and even though it will be hard to be so far away from my family, I’m super excited about it," Smith said.

Reflecting on her years at BGSU that led to this opportunity, she said what has mattered most to her are the relationships she has built and the communities she has joined.

“I’m learning that it’s not just what you teach in the classroom; it’s how you make your students feel,” Smith said.

Throughout her educational journey, she said, “I’m so fortunate that people focused on more than just the content of courses. They taught me a love of learning, and as a teacher I want to share that with my students.”