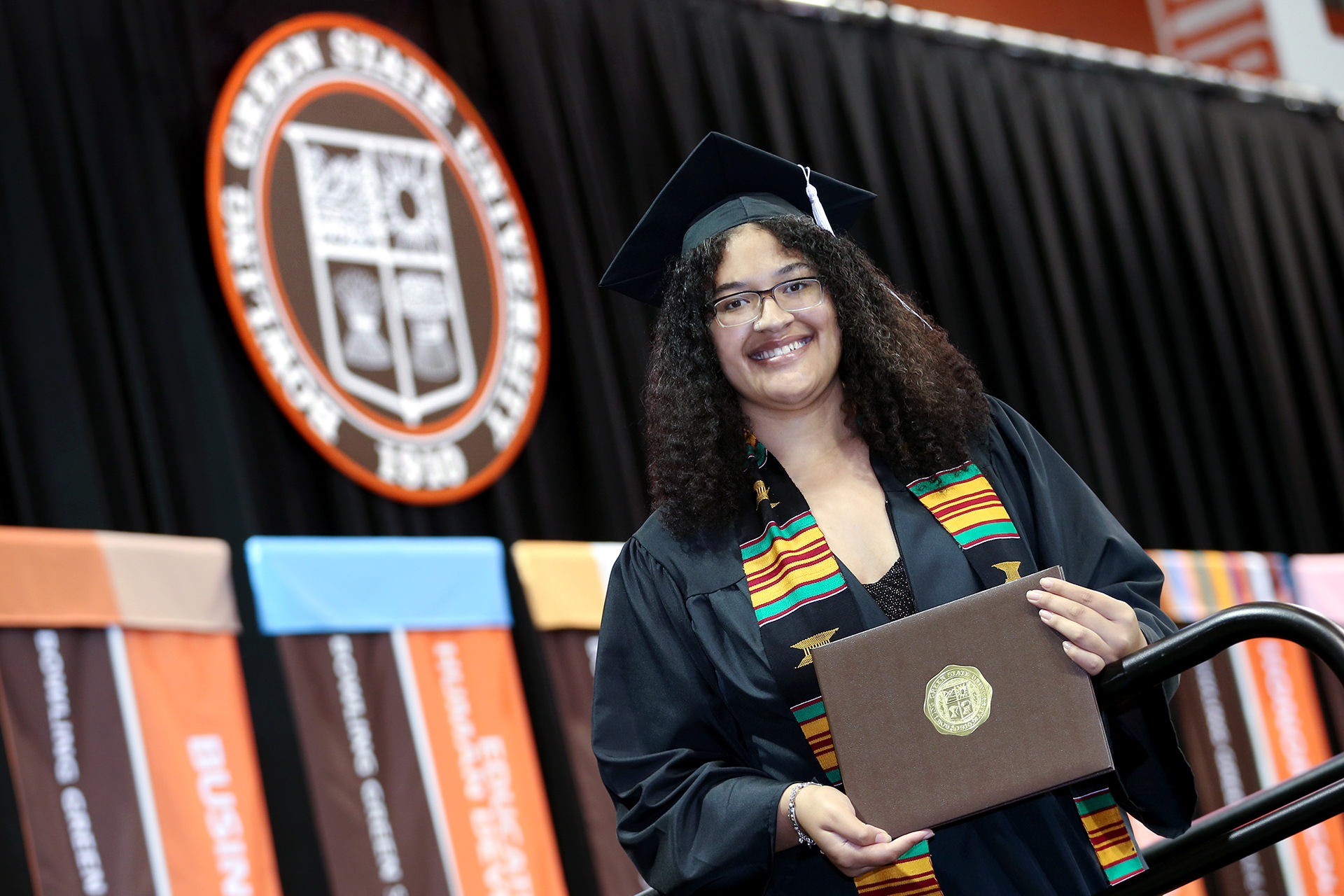 Writing about your life can be emotional. Watching your life’s story be told can be downright unnerving. For Brianna Smith, a film production major and creative writing minor from Dayton, Ohio, the process of writing and producing the 2017-18 studio experience film “Family Ties” was all that and more.

She wrote the story after taking a screenwriting class where Professor Cynthia Baron encouraged her to write a piece that would be considered for the department’s yearlong film project. The story wasn’t exactly verbatim about her life, but the pieces that did come from her own experiences were raw, real and relatable.

“Family Ties,” which premiered the week before her May 5 graduation from Bowling Green State University, tells the coming-of-age of a young African-American woman who struggles with deciding between her dream of college and family responsibilities. The authenticity of the film and the writing came from Smith’s shared experience of losing her mother and pursuing a college degree in the arts, the same as the main character, Amber.

Smith’s story was the first-ever, student-written script chosen for the film department’s studio film experience. Being the first woman, and specifically the first African-American woman, to have a story featured in the BGSU studio film experience was an important achievement. It meant her work was acknowledged, and that the voice of a female of color was heard and appreciated.

“I am so honored that ‘Family Ties’ was selected,” Smith said. That decision rewarded her writing abilities, boosted her confidence and affirmed her college and major choices were right.

What took her off guard were the emotions that came flooding back. In fact, during the filming last fall, she became depressed and suicidal, unable to shake the feelings of despair. Watching the story unfold in front of her…again…was more than she could bear at the time.

Like a post-traumatic stress reaction, Smith recalled when she was 14 years old and learned her mother had cancer. Within two months, she was gone, forever changing Smith’s world.

The person who was her most vocal cheerleader - supporting her writing and her art - was not there to get her through her high school years and all the decisions yet to be made. She was not there to praise the writings of a shy, fledgling writer whose words on paper communicated her feelings and ideas better than the spoken word.

But her mother’s and family’s influences were strong. They provided a solid foundation that helped develop Smith’s voice of authenticity and emotion in her writing. It was that authenticity which contributed to her screenplay being selected, said Thomas Castillo, assistant professor of theatre and film, and director of “Family Ties.”

Like the film’s main character, her high school art and English teachers, who both were named “Miss Weaver,” and were namesakes for the film’s art teacher, encouraged Smith.

Close friends, family and counseling helped Smith get beyond the sadness she experienced during the fall semester. The close-knit film department family supported her throughout the process, gave her space when she needed it, and included her in decisions about the direction of the film. As the film came together in the editing room, and the date for the world premiere neared, Smith's depression lifted.

She accepted that “writing this was almost therapeutic for me because a lot resurfaced from my past,” she said. She realized “I got to own my truth and be as transparent as I wanted to be.”

Putting her story on the big screen allowed her to “be my most authentic self, unpolished, confident, strong, loud, flamboyant,” she said. Retrospectively, she is proud of what she has accomplished, and hopeful that her voice represents a movement in the film industry that supports and promotes women, and women of color in leadership roles.

She is writing for a web series and will continue writing, but also plans to work as a mentor in the City Year organization, teaching and mentoring children from economically challenged areas.

“I’m really passionate about helping kids and being a mentor,” she said, acknowledging she wouldn’t have gone to college without the support of her mentors.

“I realize I have a purpose,” she said. “I can still focus on my writing, but also serve as a mentor and help children accomplish all they can.”