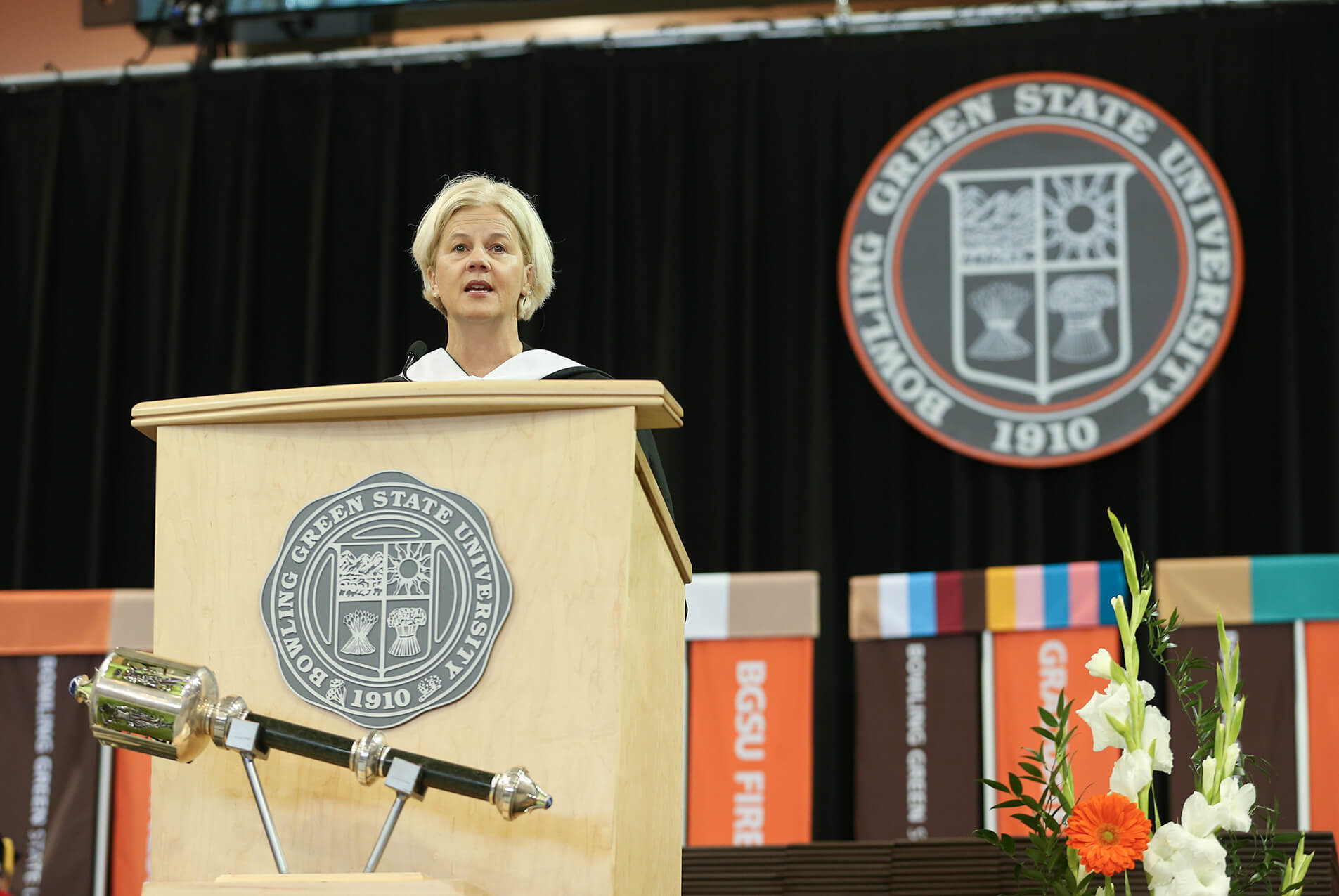 When BGSU alumna Beth Macy — now a New York Times best-selling author with a movie based on one of her books in production starring Tom Hanks — came to the podium to address the College of Arts and Sciences graduates at their May 5 commencement, her message was as down to earth as her own beginnings. Macy shared a number of life lessons she has learned over her long career as a journalist in a Virginia town and as a writer of nonfiction.

Quoting a fellow author, she said, “I tell you, the writer Annie Dillard had it right when she said, ‘You were made and set here to give voice to this: your own astonishment.’

“It’s a lesson worth applying to everything from journalism to nursing to theology,” said Macy, a 1986 graduate in journalism.

She recounted how, 32 years ago, she left Bowling Green State University 24 hours after graduating with a degree in journalism to drive her aged Volkswagon Beetle to her “first ‘real job,’ an internship at a city magazine that paid $200 a week — before taxes. A bore of a position for someone with aspirations to be a big-city investigative journalist, my main task would be to update the magazine’s annual dining guide, which meant sitting at a desk and calling 600 restaurants to ask whether they served mahi mahi and took American Express. Every day, for three months.

“Remember the lilacs. That’s my way of telling you to spend your time doing what taps into the essence of you, whatever that essence may be.”

“I was excited. I was terrified. As the first person in my family to have gone to college, I had zero financial cushion to fall back on — no wealthy uncle, no more than a hundred bucks in my checking account. I was the daughter of a widow who made $8,000 a year test-driving cars for a Honda subcontractor. My student loans bills were about to come due, and the only thing holding my car battery in place under the backseat of my rusty VW was a broken cutting board my boyfriend helped jam between the rusty metal frame and the seat.”

If she could go back and speak to that young self, she said, she would “blanket her with beams of confidence,” and tell her to “Remember the lilacs. That’s my way of telling you to spend your time doing what taps into the essence of you, whatever that essence may be.”

Not even realizing it at the time, Macy found her essence as a child hiding among lilac trees at the end of her block, spying on people passing by and eavesdropping on their conversations. Inspired by the book “Harriet the Spy,” given to her by a favorite teacher, “safe and unseen, I spent hours there bearing witness to the beautiful and the strange, the just and unjust.”

And, like Harriet, she eventually discovered a voice that was distinctly her own — a voice she used to tell the stories of those around her: The Liberian refugee who squealed the first time she heard a Diet Coke clunking down a soda machine chute and shouted, “There is a person inside that machine!” The teenager who grew up in the projects but had the backing of a powerful African-American community that frequented the neighborhood library where she worked as a page, and who went to Harvard on a full ride. The gritty Galax, Virginia, furniture maker who took on China in the court of international trade to keep his factory going.

The book that resulted from Macy’s series on that furniture maker, “Factory Man,” is now to be a major motion picture.

It was those types of astonishing experiences and stories that kept her working as a reporter in Roanoke, Virginia, where she and her colleagues once went seven years without a raise, and that validated for her Dillard’s declaration about our purpose in life.

“I feel so privileged to know my community through my work,” she said. “It’s exactly what my BGSU journalism professors Ray Laakaniemi and Vicki Hesterman taught me to do: You’ll know you’ve arrived as a reporter, they instructed us, when you can go into any gathering, from a church to a political meeting or a neighborhood bar — and come away with three story ideas.”

"Life is fleeting. Only people who want the best for you should be on your home team.”

But Macy had other concrete advice for the graduates.

Describing herself as a first-generation feminist, she said, “Ditch the awful partner, the sooner the better. I kissed some seriously nasty frogs before I met a guy comfortable enough with his manhood to marvel at a sunset, and goofy enough to dance the robot backwards across the kitchen floor when I’m least expecting it — just to make me laugh.

“I believe that choosing who to partner with is the single-most important decision you’ll make: For a variety of complicated reasons dating back centuries if not millennia, women now comprise more than half the college student population but still only 20 percent of the country’s leadership positions. This, despite the fact that companies employing women in large numbers outperform their competitors on every measure of profitability. I am certain that I would not be as confident or competent a writer — or person — had I not married someone who has treated me his equal on everything from grocery shopping to laundry to kid-schlepping.

“Let me say it again: Life is fleeting. Only people who want the best for you should be on your home team,” she told the “almost-graduates.”

More practical advice for the students (and for herself, she said): “Put your phone down! Look around and gaze into the eyes of your fellow human beings. I have a new book coming out in August about the opioid epidemic. It’s called ‘Dopesick,’ and I don’t think it’s a coincidence that the worst drug epidemic in the history of our nation comes at precisely the same time that people your age — and even high schoolers and middle schoolers — are experiencing higher rates of depression, anxiety and suicide than ever before. We also have an epidemic of loneliness.

"Find your own stand of lilac trees, be still amid them, look up and reach out."

“For many, cellphone ‘talking’ has diminished or taken the place altogether of dating, driving and even sex. The data on this is absolutely clear: The more time you spend on screens and social media, the more likely you are to be unhappy. Scientists have even quantified it: It turns out that having weak social connections is the health equivalent of smoking 15 cigarettes a day.

“True happiness is achieved not through social-media status or the accumulation of stuff but by having the capacity to share meaningful experiences with people,” she said. “When we spend our energy engaged in meaningful work that makes us happy and enriches our larger community, the rewards, I promise, do eventually follow.”

“Maybe outsiders and underdogs are not your job, but I want you to leave here today with a renewed calling to nurture your own unique slant, whatever that may be. Every time you feel the hair sticking up on the back of your neck, pay fierce attention.”

Whatever the graduates wind up doing and wherever they go, she said, “Every place is as vibrant as the next — if you’re engaged in it. You’re here today with a much larger and much more sophisticated sense of the world than I had three decades ago. You’ve spent four years or so honing your own distinctive voices. Now, it’s time to be heard.

“Just don’t forget to season your own corner of the world — wherever it ends up being — with your own slant, that tilted way of looking at life that you and only you can provide. Find your own stand of lilac trees, be still amid them, look up and reach out.”