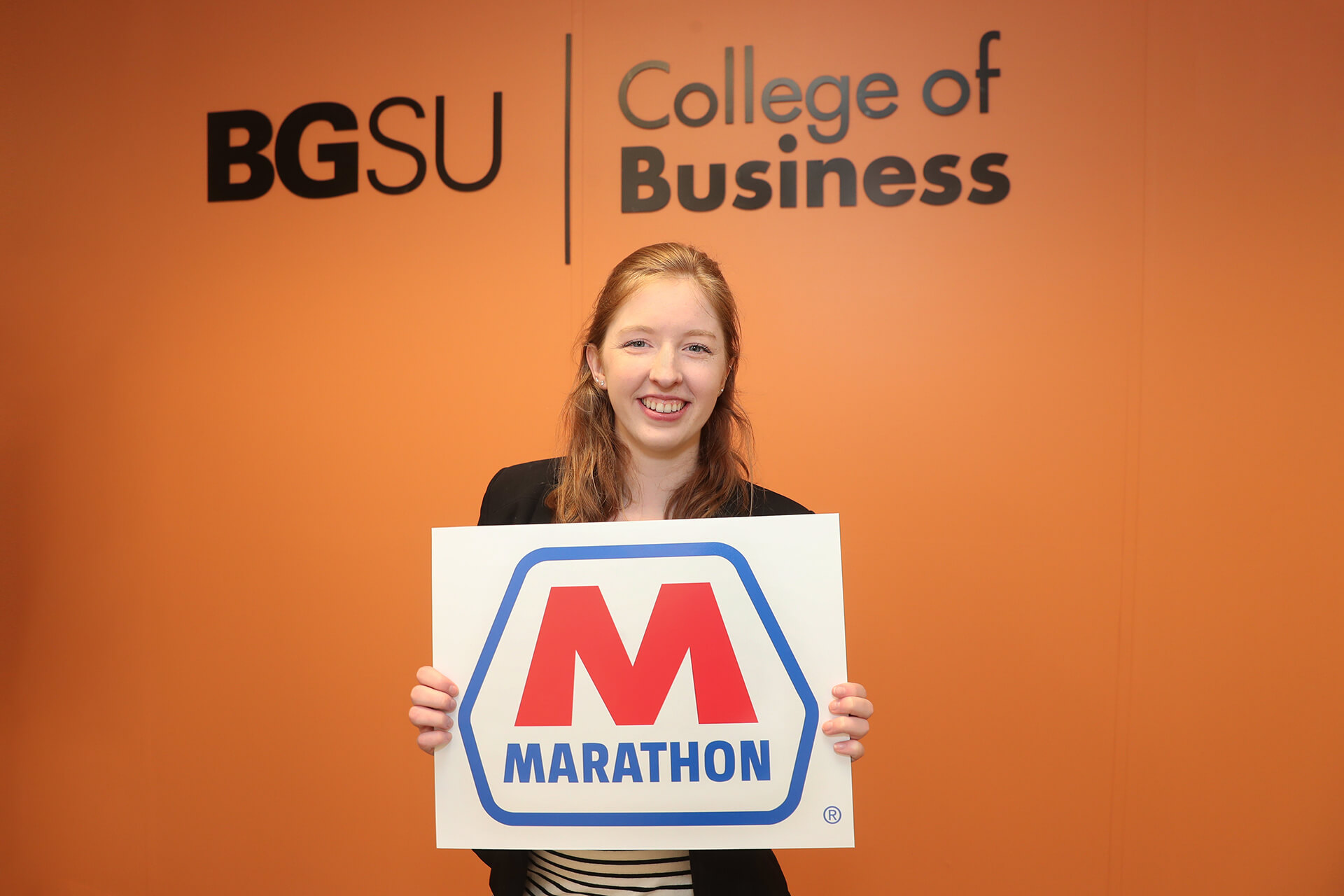 It’s a big deal to graduate from Bowling Green State University. It’s an even bigger deal when the graduate has a job waiting at a Fortune 500 company.

Emily Hoersten is graduating with a Bachelor of Science in business with a specialization in information systems and then will start working for Marathon Petroleum Corp. as a business analyst.

“I had a couple of interviews with a few different companies, but Marathon definitely stuck out the most, so I had my fingers crossed,” she said. “I think I had my second interview on a Friday and had a job offer on a Monday. I am super excited about working for Marathon.”

Hoersten said the two internships she had gave her the experience and preparation she needed in order to get hired at the petroleum company headquartered in Findlay, Ohio.

“I worked for Therma-Tru Doors in Maumee two summers ago and I worked for Owens Corning last summer,” she said. “I had a couple of internships under my belt and I decided to go for the business analyst job at Marathon.

“I kind of think of a business analyst as the go-between for the technical side and the business side — somebody who understands the language of the people who are doing development but can also speak to the business side, too.”

Hoersten, who grew up in Sidney, Ohio, north of Dayton, said it’s funny to think back now to how she arrived at BGSU, because it wasn’t on her wish list.

“My mom went here and my dad went to Ohio University and I refused to visit either school because my parents went there and I didn’t want to follow them,” she said. “We were on a tour at the University of Toledo and I hated it. I knew there was no way I was going there, so I told my parents we could leave the tour early.

“My dad said, ‘Well, we drove all the way up here, so why don’t we try to get a tour at BGSU on the way back home?’ We called and they just happened to have a tour in a half hour. We left Toledo, came here, jumped onto that tour at the last minute, and I instantly fell in love with the campus. I knew the second I was on campus that this is where I wanted to be and this is where I wanted to go to school.”

Hoersten, who originally was a computer science major, said BGSU’s campus felt friendly and inviting and that it reminded her of home.

“It just liked how it felt,” she said. “It was bigger than I was used to, but it also had the hometown feel. It reminded me of home a lot.”

During the first semester of her sophomore year, Hoersten realized that programming wasn’t something she wanted to do long term. She always had been interested in business from afar and decided to take a closer look.

“I talked to some people, as well as my adviser, and I decided to switch to business,” she said. “I love the College of Business and information systems. We got to learn other things like accounting and marketing and all sorts of other things. It wasn’t just sitting and programming all day long.

“I wanted to talk to people and interact with others, and I really think that the College of Business has been great with stuff like that. Especially with group projects, there’s just more of those opportunities throughout the curriculum of the College of Business. It was a very smooth transition and I’m still going to graduate in four years. It’s just incredible.”

Hoersten had some leadership opportunities in organizations she was affiliated with during her time at BGSU.

“The minute I switched my major, I got into the Information Systems Organization” she said.  “I was the community service chair for my social sorority, Alpha Omicron Pi, for a semester and have been on multiple other committees and groups, including Women in Computing and the ACM (Association of Computing Machinery).”

Four years later, Hoersten is happy that she and her family stopped at BGSU for a tour.

“I just feel like this is such a welcoming place and everyone is so friendly all the time,” she said. “BGSU is a really great down-to-earth place and anyone is welcome here. I’ve found that to be true in all of the organizations I have been a part of during my time here.”