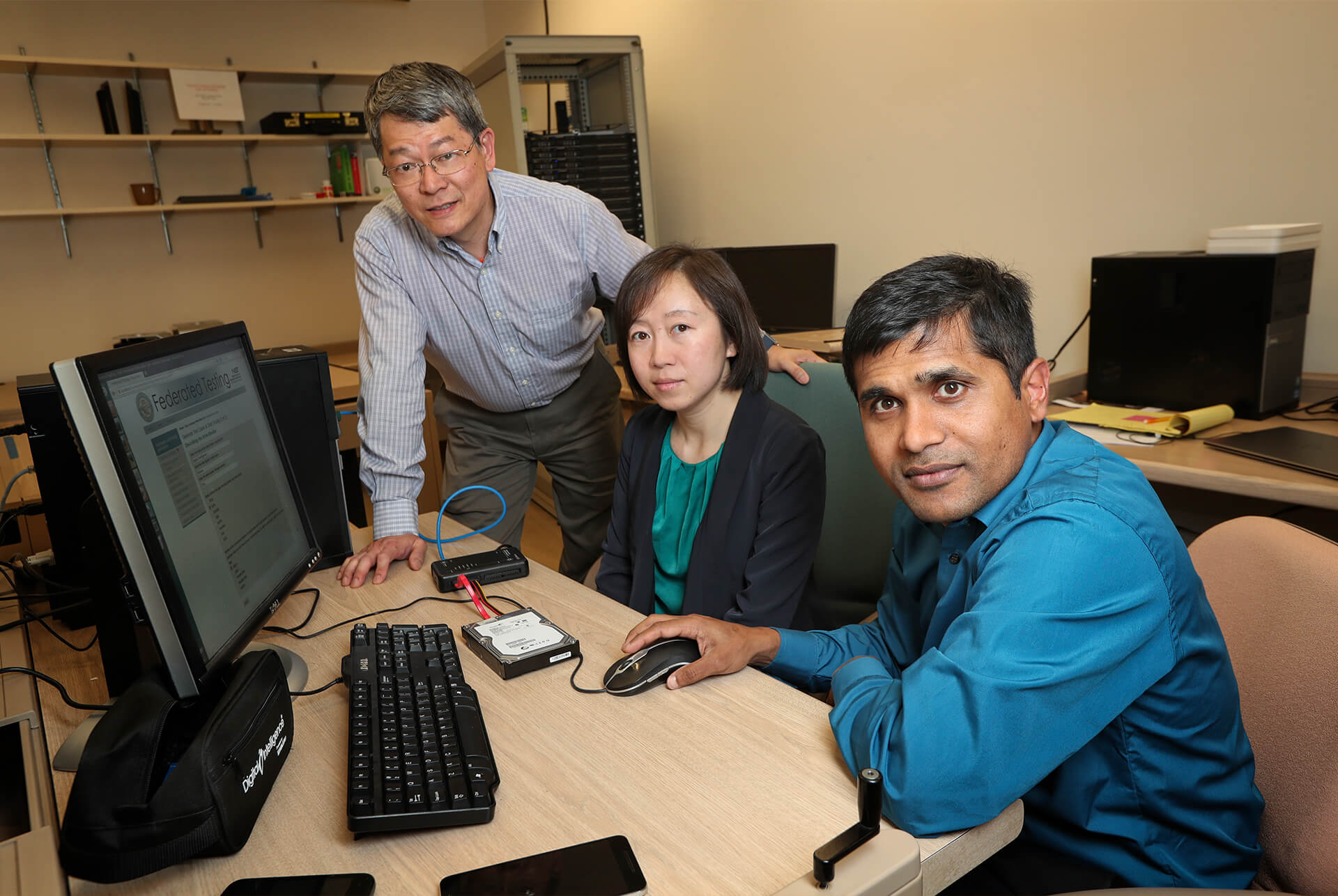 (left to right) Joe Chao, Yan Wu and Sankar Roy demonstrate the use of a hardware write-blocker (the black device on the table), one of the primary tools in digital forensics, to make a secure copy of a hard drive’s stored contents to be used as evidence. On the computer screen are National Institute of Standards and Technology (NIST) guidelines for evaluating whether the device meets NIST standards.

(left to right) Joe Chao, Yan Wu and Sankar Roy demonstrate the use of a hardware write-blocker (the black device on the table), one of the primary tools in digital forensics, to make a secure copy of a hard drive’s stored contents to be used as evidence. On the computer screen are National Institute of Standards and Technology (NIST) guidelines for evaluating whether the device meets NIST standards.

Hacking, identity theft, even the once-friendly Facebook — as the world becomes more dependent on technology, criminals are finding more avenues for its misuse.

This has created a greater need for sophisticated experts skilled in tracking and thwarting those who would commit cybercrime. Bowling Green State University’s Department of Computer Science is developing courses, specializations and degree programs in line with the latest government standards to meet today’s and tomorrow’s information technology-related workforce needs.

“Receiving this grant is very important for us”

A digital forensics lab is being constructed in 308 Mathematical Sciences Building, and Wu and Roy have received a grant from the National Institute of Standards and Technology (NIST), a division of the U.S. Commerce Department, to support the incorporation of national standards into the department’s digital forensics curriculum and teaching tools.

“Digital forensics is the other side of the coin from cyber security,” said Wu, whose research has been related to software engineering and software assurance related to security.

As Roy said, “It’s a post mortem, after you’ve been attacked. You want to know where it came from, how it was successful (what were your vulnerabilities they exploited that allowed it to happen), and where is the attacker now? Those are the three big pieces.

“Typically, the attacker intentionally or unintentionally leaves a few traces behind,” he said. “Since cybercrime has become more common, once a computer crime has been committed, police or the FBI now seize computers or other electronic devices and the digital forensic analysis starts. It begins with finding digital artifacts or proofs hiding in the computer or on the network, on the Wi-Fi router or in the smartphone. They will analyze a computer’s ‘inner stuff,’ smartphone’s ‘inner stuff’ and the network device’s inner logs.”

Because this has become such a prominent national and international issue, the government is very interested in promoting high-quality study of digital forensics and has made financial support available to educational institutions, Wu said. BGSU’s $56,336 NIST grant was one of only four awards totaling about $266,000 NIST has made this year to support standards education in undergraduate and graduate-level curricula.

For example, for digital forensic reports to be deemed reliable and useful, all equipment should meet the standards set by NIST, and students should be trained in its proper use, Roy and Wu said.

“They are encouraging academics to apply the national standards to designing curriculum, so as to expose students to the relevant standards,” Wu said. “We need to know the major and minor requirements for a tool to be eligible to qualify according to the standards so we can design the lab accordingly and help students learn better and also be aware of those standards and those tools.”

Roy pointed out that although NIST is not widely known among the public, it sets and promotes numerous standards for many of the technologies of the United States, which all government offices and contractors should use. The grant application is open to all technology, not just computer science, and only about five awards are given nationally for all types, making the process highly selective and competitive.

“Receiving this grant is very important for us,” he said.

Students will explore the theoretical aspects of digital forensics, and through a series of laboratory exercises, will use digital forensics tools in hands-on activities that will illustrate the importance of employing standardized methods to the integrity of test results.

“Your students become more familiar with this so they become prepared for the workforce in the future,” said Wu, who worked as guest researcher at NIST in Gaithersburg, Maryland, before joining BGSU.

Roy was the first faculty member hired for the digital forensics program, about three years ago. His Ph.D. and research expertise are in computer security. He is also co-investigator on a separate, three-year National Science Foundation grant related to cybersecurity involving security vetting of Android apps. He manages $100,000 of the $500,000 grant, on which he partners with fellow researchers from Kansas State University and the University of South Florida.

The proliferation of online apps makes it difficult to keep pace of security threats. In response, "Data-driven Approaches for Large-scale Security Analysis of Mobile Applications" investigates how to apply big-data analysis techniques to analyze mobile apps for the Android platform to accurately identify underlying security problems.

“We are asking, ‘Is there any security vulnerability hiding in your smartphone?’” Roy said.

The computer science department is collaborating with the Ohio Bureau of Criminal Investigation facility on campus to expand the curriculum in digital forensics and cybersecurity, said department chair Dr. Joseph Chao. In fact, the BCI’s digital forensics officer is a BGSU graduate who changed careers from law enforcement to computer science, he said.

“If we have enough interest, digital forensics could become a new degree,” Chao said. “With all this publicity surrounding these issues, such as the alleged Russian hacking during the U.S. election process, this field will become even more important.”

The department’s other two foci are software engineering and data science, commonly referred to as “Big Data.”

“We’re focusing on these three areas as the most timely and important in the immediate and near future,” Chao said.