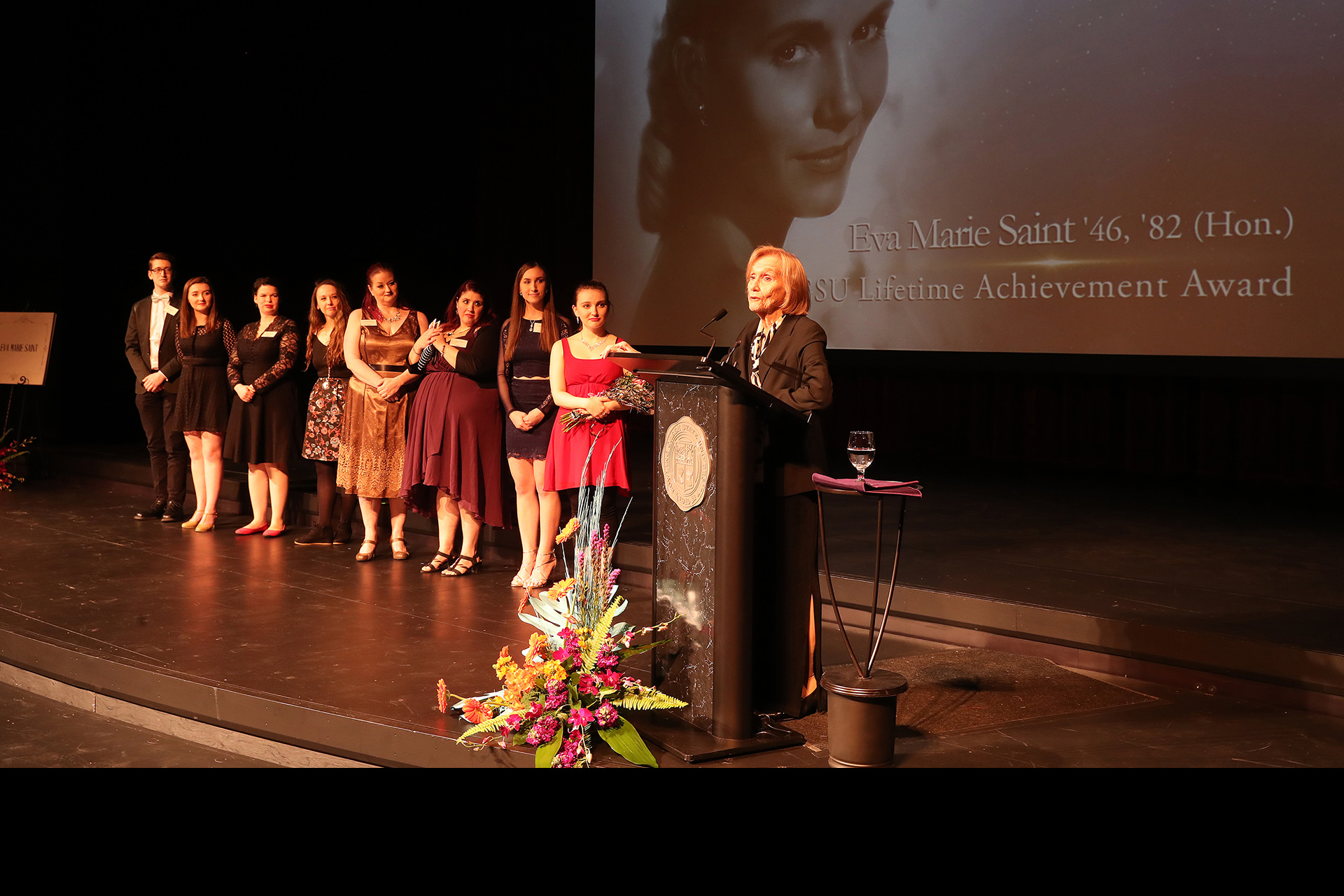 When Eva Marie Saint arrived in Bowling Green, Ohio, she was homesick for the Adirondack Mountains of Upstate New York. When she graduated from Bowling Green State University in 1946, she was poised to become one of the most talented actresses of her generation.

"Miss Saint embodies all that Bowling Green State University is about," BGSU President Rodney Rogers said. "As a public university, we are focused on ensuring the value of a college education and preparing students for life beyond BGSU. Miss Saint is the premier example of how you can, indeed, go far. We are honored she was able to join us and spend some time on campus to reminisce, share wisdom with our theater and film students and see the BGSU of today.”

Miss Saint joined Robert ’55, ‘06 (Hon.) and Ellen ’54, ’06 (Hon.) Thompson as the only other person to have received the Lifetime Achievement Award. The Thompsons were given their award in September 2016 in recognition of their commitment to their alma mater and to the future of BGSU.

Miss Saint has had a distinguished acting career in film and on Broadway and television, spanning more than 70 years and over 160 productions. She is best known for starring in Elia Kazan’s “On the Waterfront” in 1954 and winning an Oscar for Best Supporting Actress for her performance. Some may best remember her for co-starring with Cary Grant in Alfred Hitchcock’s “North by Northwest” in 1959.

She received Golden Globe and BAFTA Award nominations for “A Hatful of Rain” and won a Primetime Emmy Award for the television miniseries “People Like Us.” Her film career includes roles in “Raintree County,” “Exodus,” “The Russians Are Coming,” “Grand Prix,” “Nothing in Common,” “Because of Winn-Dixie,” “Superman Returns,” and “Winter’s Tale.” She has played opposite nearly every matinee idol of the 1950s and ’60s, including Paul Newman, Grant, Warren Beatty and Marlon Brando.

“This is the ninth time I’ve been back since I graduated in 1946,” she said. “The students are just wonderful. They’re bright, they’re serious, they’re funny and they’re adorable.”

Miss Saint offered advice to BGSU’s theater students such as sticking with their craft and continuing to learn after they graduate.

“You have to go wherever actors are and you have to study,” she said. “I studied with Herbert Berghof and then I studied with Elia Kazan at the Actors Studio and Lee Strasberg. While I was studying, I was making rounds, but the fact that I was still working was important.”

BGSU is important to her because the University is where she got her first experiences in acting.

“My beginnings were here,” said Miss Saint, who followed her sister, Adelaide, to BGSU. “I wanted to be a teacher; my mom had been a teacher. I became a Delta Gamma and Dr. Elden T. Smith, who had been the head of the drama department, was my house father [at the sorority]. He would see me every day and thought I should try out for a comedy, and I said I’d never acted on a stage. He said, ‘I like your voice and I’ll work with you.’”

After receiving permission from her father, Miss Saint changed her major from education to theater during her junior year. Her father told her, “Honey, whatever you want to do, you just do your best.”

It was that kind of advice from her parents that helped guide her in college and professionally as well.

“I guess I felt grounded as a child and no wrong could come and you keep working hard and be sincere and honest and try to do what you want to do,” Miss Saint said. “Maybe it’s a fool’s paradise, but it’s worked for me so far. I think you have to have your priorities in life. I married the right man. I have two beautiful children and four grandchildren while being an actor.

“I think being married to a director, we worked it out so only one would of us would be on location at a time, and I don’t think we ever worked at the same time.”

She was married to the late Jeffrey Hayden for 65 years. Hayden was a film director and producer, and also wrote for television, film and theater. He died of cancer in December 2016.

“My husband loved coming here too,” Miss Saint said. “That’s why it was a little hard today. I had a moment of such sorrow because he died last year. He just loved coming back here and he loved the town.”

She earned the BGSU Distinguished Alumna Award in 1980, an honorary doctorate of performing arts in 1982 and is the namesake for the University’s Eva Marie Saint Theatre in The Wolfe Center for the Arts.

“I don’t think I would have been an actress if it weren’t for Bowling Green,” Miss Saint said. “That’s why I love coming back. I feel so thankful that Bowling Green gave me the basis of what ultimately I was supposed to do.”