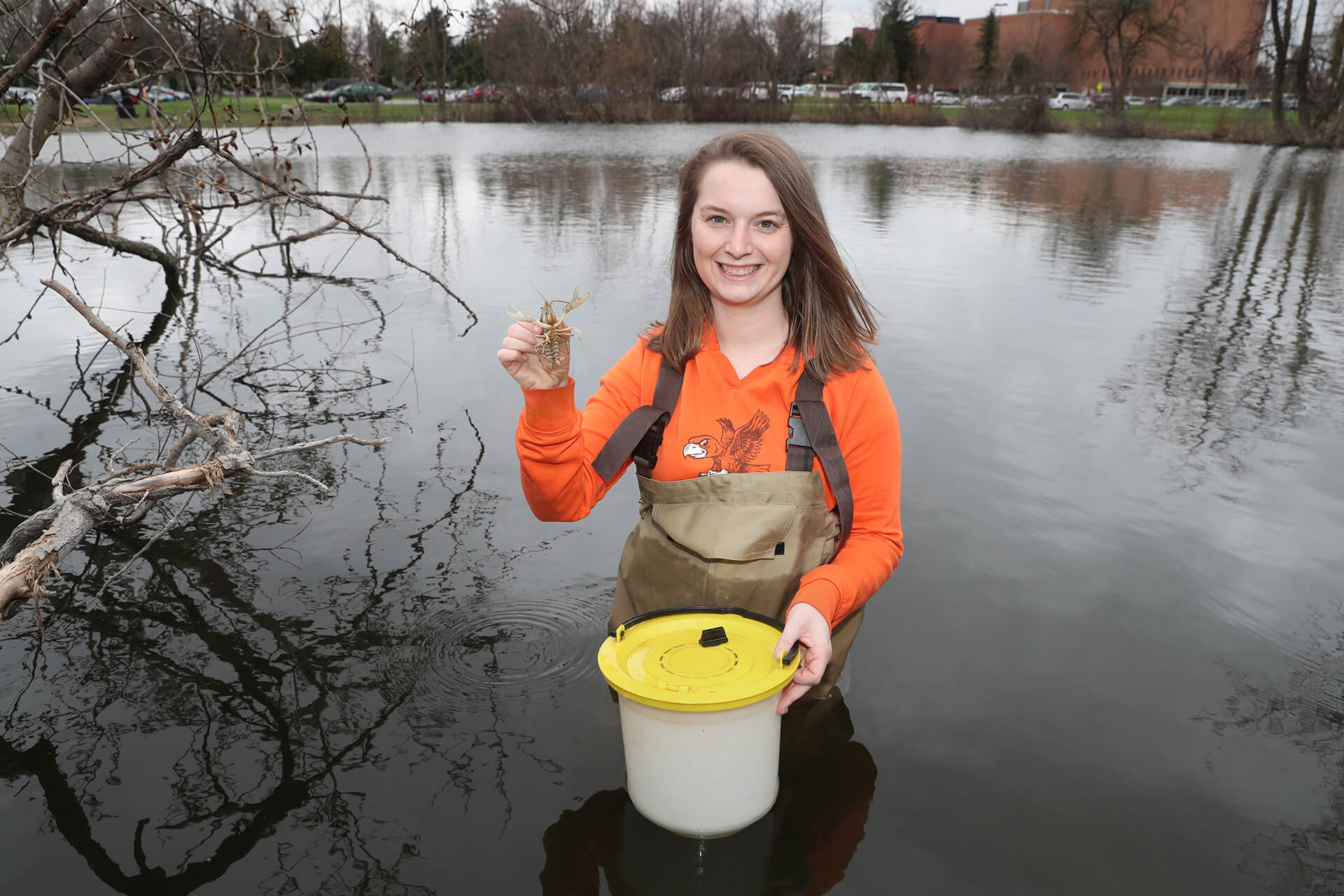 As a member of the Bowling Green State University Laboratory for Sensory Ecology Lab of Dr. Paul Moore, Ana Jurcak has spent the past six years catching, recording and analyzing the actions of crayfish.

Jurcak is fascinated by animal behavior, especially predatory and prey in aquatic animals, studying the sensory signals of how prey detect predators. She came to BGSU as a master’s student in 2012, discovered she loved teaching and research, and stayed on for a Ph.D. with a goal of becoming a university professor.

During her time at BGSU, she gained additional experience as a presenter, teacher, mentor and leader because of her involvement in the Northern Ohio Alliance of the Alliances for Graduate Education to the Professoriate (NOA AGEP). The National Science Foundation-funded program is designed to increase the number of under-represented individuals who earn doctoral degrees in the sciences and go on to take faculty positions.

Jurcak is the first BGSU student enrolled in the AGEP program to complete a doctoral degree, according to Dr. W. Robert Midden, associate vice provost for experiential and innovative learning.

“I've always been very proud and thankful for my grandparents, their sacrifice to come to the U.S., and the opportunities we've had because of them.”

She started in the NOA AGEP program three years into her Ph.D. Thanks to her grandparents, who came to the United States from Cuba in the late 1950s and early 1960s, before and during the Cuban Revolution, her Cuban heritage made her eligible for the special program.

“I've always been very proud and thankful for my grandparents, their sacrifice to come to the U.S., and the opportunities we've had because of them.”

Her interest in the outdoors and water goes back to family vacations at the beach, she recalled. Though she was initially interested in studying physical therapy at State University of New York at Oswego, an ecology class that met outdoors convinced her to pursue a major that would allow her to enjoy nature and being outdoors.

The research she has been doing for her master’s and Ph.D. has provided plenty of outdoors time. Each summer for nine or 10 weeks, she has traveled to the University of Michigan’s biological station in northern Michigan where she collects largemouth bass and channel catfish (predators) and virile and rusty crayfish (prey) to study how sensory ecology plays a role in the predator/prey dynamics. The natural environment of the stream lab allowed her to build mini streams and separate the bass and the crayfish so they could smell but not attack.

“We would videotape their behaviors, gather statistics and use motion-tracking software to analyze the crayfish behaviors,” she explained.

She has published four papers and a book chapter as part of her research, including “Behavioral Decisions in Sensory Landscapes: Crayfish Use Chemical Signals to Make Habitat Use Choices” and “Sensory Signals and the Reaction Space in Predator-Prey Interactions.”

Among her most memorable experiences have been participating in STEM (science, technology, engineering, mathematics) activities at BGSU such as Kids Tech University, STEM in the Park, and Girl Power at the Imagination Station in Toledo.

Jurcak’s involvement in AGEP has also created opportunities to enhance her leadership and presentation skills and work with industry professionals and other young scholars who have provided mentorship and peer support.

With her Ph.D. in hand after May 4, she is taking her degree, her knowledge and her experiences with her as she moves from student to professor. This fall she will begin as a tenure-track, assistant professor at Friends University, a small liberal arts Christian university founded by the Quakers in Wichita, Kansas.

“Ana Jurcak is a wonderful example of the excellence that can be found among BGSU graduate students,” Midden said. “Not only has she performed exceptionally well academically having published multiple articles, a book chapter, and given a number of presentations already, but she has also demonstrated a strong commitment to contributing to the welfare of her communities.

“She has been devoted to increasing awareness and appreciation of and participation in STEM by young people. We are very proud that she is one of the scholars.”