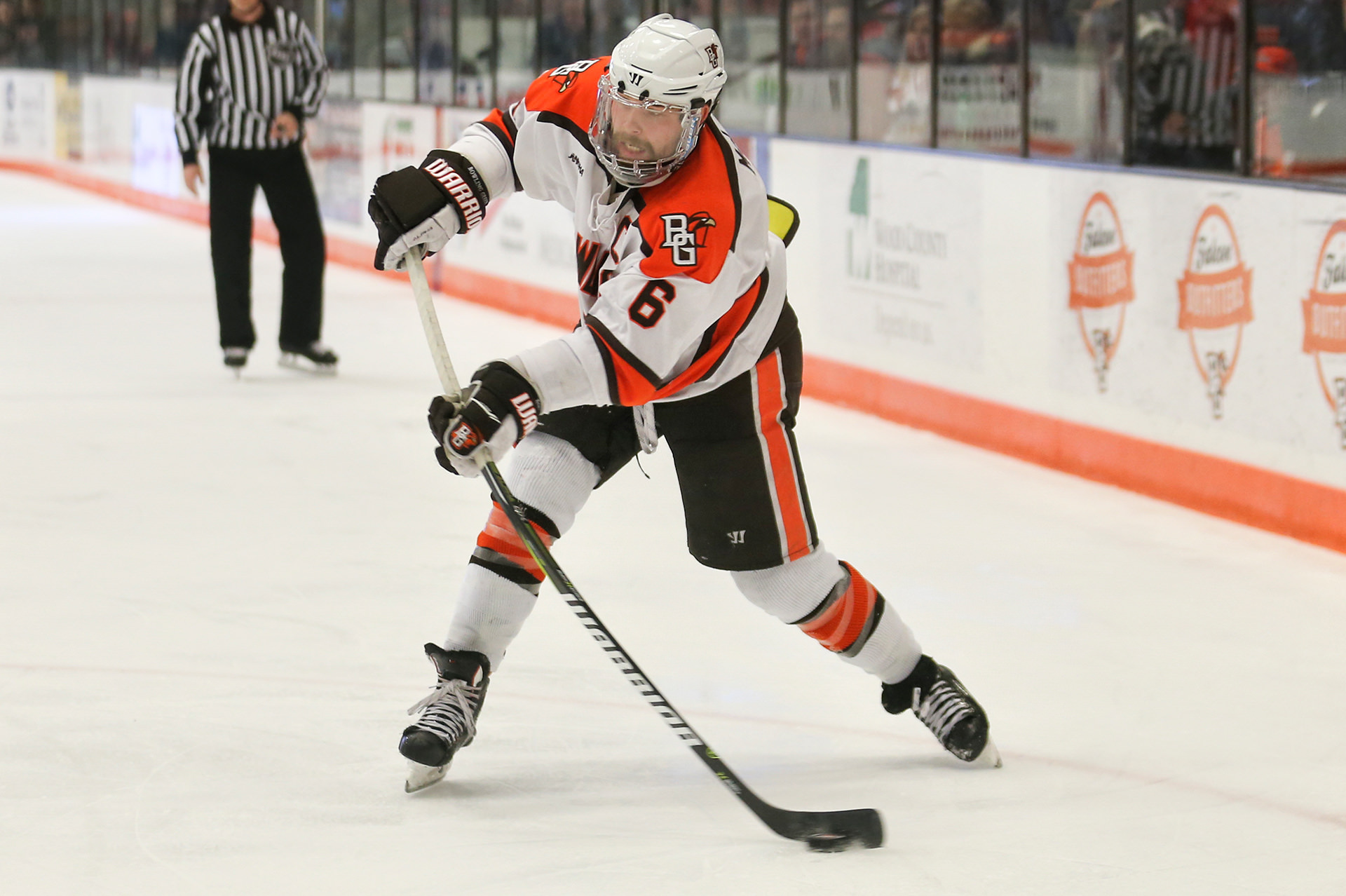 Mitch McLain is up for Hobey Baker, Hockey Humanitarian awards

BGSU hockey forward leads by example on and off the ice

Mitch McLain is a crowd favorite on and off the ice.

Not only is McLain the team captain of the Bowling Green State University hockey team but he leads the team in scoring 14 goals this season and also leads his teammates by example.

Off the ice, he has worked with the children at Wood Lane School, which serves students with varying disabilities, for four semesters.

He is being recognized for his efforts on the hockey team and as a mild-to-moderate intervention specialist major by being nominated for the Hobey Baker Award, which is awarded annually to the best collegiate hockey player, and also being named a finalist for the Hockey Humanitarian Award.

Hobey Baker Award candidates must demonstrate strength of character both on and off the ice, contribute to the integrity of his team and display outstanding skills in all phases of the game. Consideration should be given to scholastic achievement and sportsmanship. The Hockey Humanitarian Award is presented annually to college hockey's finest citizen, a student-athlete who makes significant contributions not only to his or her team, but also to the community-at-large through leadership and volunteerism.

McLain, who has a 3.515 grade-point average and is a two-time WCHA All-Academic honoree, doesn't see his captain duties as any extra pressure, but just part of the job.

"I don't think it's any extra weight on my shoulders," said McLain, a senior forward from Baxter, Minnesota. "What I feel I bring to them is that I help them as much as I can because that's how we're going to be successful. Hopefully, someday they pass that along to guys that they're playing with."

The Falcons are 16-8-6 overall and 8-3-5 at the Slater Family Ice Arena, and, according to McLain, and have jelled as a team since the new year.

"I learned during my visit for hockey that BGSU had one of the best education programs in not just Ohio but in the country. It's a great school."

"We've had a pretty good season," he said. "I think the expectations from our group was it was going to be a year of learning and having guys play a lot of hockey. I think we've done a pretty good job of learning from the beginning of the year and to the point of where we are now. We're in a good spot, we're third in the league and we've been playing our best hockey since we've come back from break, which is exactly what you want to do going into the playoffs."

BGSU won the Great Lakes Invitational at Little Caesar's Arena in Detroit by defeating Michigan and Michigan Tech to ring in the new year. The Falcons have gone 8-2 since the break.

McLain took just as much consideration in deciding where he would play hockey collegiately as what he would study once he enrolled.

"I knew I wanted to be a special education teacher," he said. "I learned during my visit for hockey that BGSU had one of the best education programs in not just Ohio but in the country. It's a great school. I can't complain about my experience on the education side. We have great faculty and they support me with hockey and with wanting to be a teacher. It's been a great experience."

As part of his major, McLain had to find a place to volunteer, and he chose Wood Lane.

"When I went there and volunteered for the first time, it was a lot of fun and I enjoyed working with the staff and built relationships with the kids and it just kind of grew from there," he said. "Each semester, I went back to Wood Lane because I enjoyed being there so much. They hooked me up with Special Olympics as well and it's been a blast working there. I enjoy it so much I keep going back.

For the Special Olympics, McLain would meet children and adults from Wood Lane at Al-Mar Lanes and bowl once a week for about an hour and a half.

"You get to hang out with them and bowl," he said. "I had a blast. We sent a team to the state tournament, so it's a pretty cool experience."

For McLain, working with the kids at Wood Lane helps him put hockey in the proper light.

"I just think that with my time at Wood Lane, seeing how much those kids go through each day and how uncomfortable they are at times doing things and yet they're always in a good mood or willing to try what you're asking them to do," he said. "I think it puts a lot of things in perspective when it comes to hockey for me. If I don't necessarily feel good one day or if I'm having a tough time with something, going there just makes me realize there are people going through things who are a lot worse off than I am.

"Those kids need my support but they're my support system too. When I have a bad day hockey-wise and I go there, they really treat me like one of their friends. That's really what I take from the whole experience."

In December, McLain invited children from Wood Lane to the Ice Arena to have some fun on the ice. His teammates were more than happy to accompany their captain.

"My teammates are great," he said. "I've asked them the last couple years if they would take their time and do that for me. I think it's a special thing because it gives people a chance to experience what might be a little uncomfortable at first, but at the end of the day it makes us all better. It helps impact other lives, and those kids definitely impact us as a group too. I just think it's a special opportunity, and my teammates are great with it. It's a rewarding experience for everyone involved."