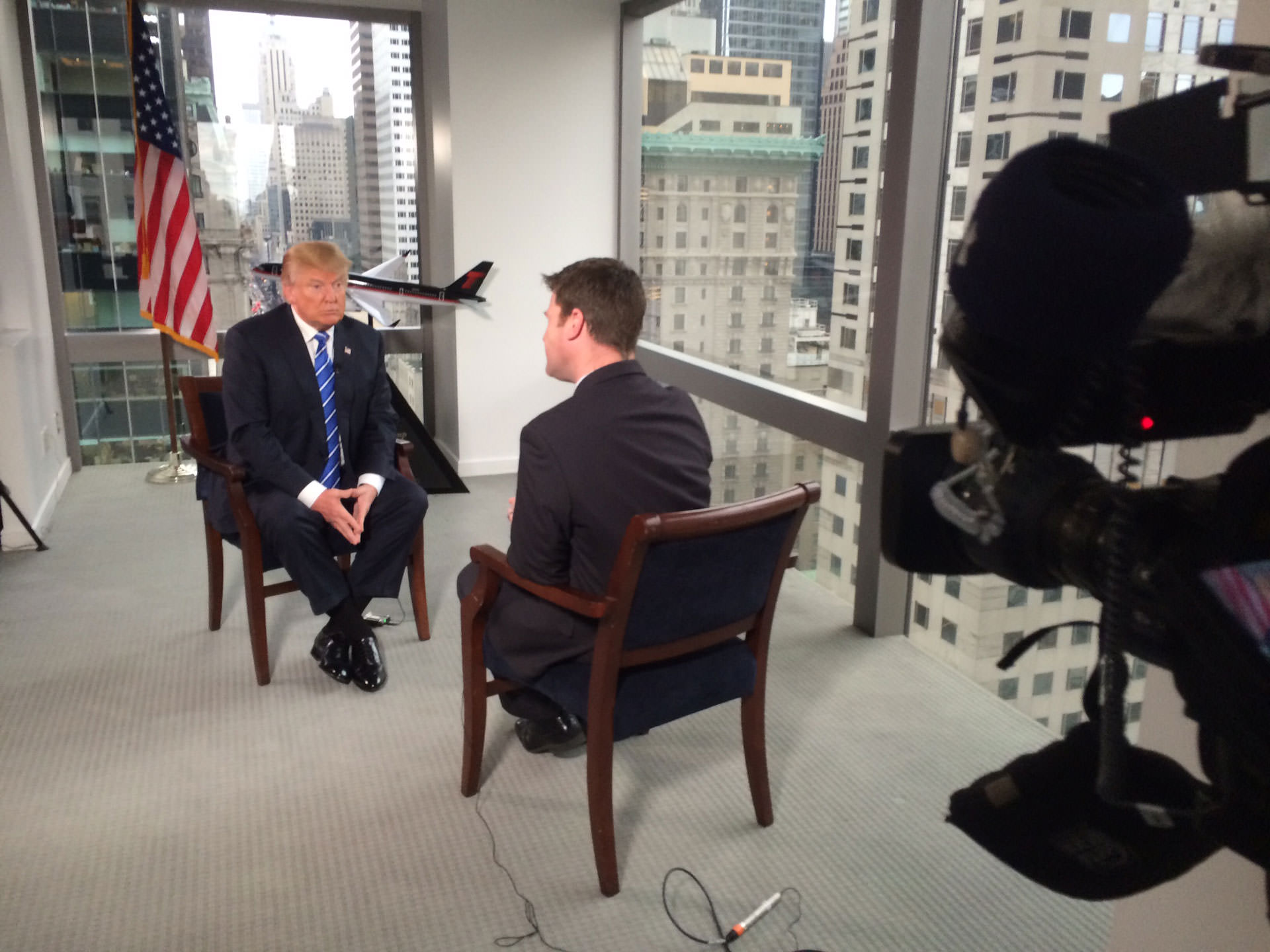 BGSU alumnus has successful career as news anchor and reporter

From covering breaking news on major events, to flying with the Air Force on a humanitarian mission, to meeting President Donald Trump for dinner at the White House, it has been a whirlwind of a career for news anchor and reporter Blair Miller ’98.

It’s been nearly 20 years since Miller received his degree in Interpersonal and Public Communications from Bowling Green State University, and he has had many amazing experiences since then. He started working right out of college at the NBC affiliate in Charleston, South Carolina, where he covered a mix of stories, but mostly military and politics.

Four years later, Miller moved to Charlotte, North Carolina, where he was the main news anchor for the 5, 6 and 11 p.m. newscasts. That’s where he was given opportunities that elevated his career. It’s also where he got to know the Trump family.

“They have property in North Carolina and he (Trump) bought a golf club in a nearby community and made some changes there,” Miller said.

Miller covered the Trumps and their involvement in the Charlotte community over the span of his 12 years at WSOC-TV.

“There was always a rumbling of him stumbling into the political arena and people would say, ‘There’s no way he’d ever run or ever be successful,’” Miller said.

Once Trump made the announcement and hit the campaign trail, Miller was on his way to WSOC’s sister station, Boston 25 News, where he currently anchors the weekday 4 p.m. newscast.

Because of his strong ties to covering the Trump family, Miller was put on the political beat and covered many debates, campaign stops, conventions and the primaries.

“On election night, we didn’t think we’d be very busy,” he said. “But we were on the air until our 4 a.m. newscast the next morning.”

Days after Trump won the election, Miller was one of about 10 people invited to dinner at the White House. The call came on a Saturday and he only had 30 minutes to make a decision.

“My husband and I have two children ages 3 and 4, so there was childcare to think about, but he is very supportive of my career and we were able to make it work,” Miller said.

Miller also is a history buff, so the invitation was something he couldn’t pass up. He flew to Washington the following Monday and couldn’t believe he was going to be inside the White House.

“When I walked in, I had to go past the West Wing, Oval Office, the Roosevelt Room, and I thought, ‘This is crazy,’” he said. “No matter how you feel about the outcome of an election, or who’s in office, anytime you walk into the White House it’s pretty remarkable.”

The dinner lasted about two hours and Trump wanted to hear from regional media about the decisions that are made in determining what news stories are covered. Miller received the dinner invitation since he had interviewed Trump eight times in the past, including his time in Charlotte when rumors of his presidential run were circulating.

“He joked and said, ‘You didn’t think this would happen, did you?’” Miller said.

Besides his reporting on politics, Miller has covered many national news stories, including the Boston Marathon bombings and the shootings at Virginia Tech University. One of his most memorable assignments was traveling with the U.S. Military overseas. He recalls riding in the cockpit of a cargo plane dropping humanitarian aid over Afghanistan.

“I looked down and saw sparks coming from the ground and asked what that was, and they told me we were being shot at from the ground," Miller said. "I thought, wow, that’s pretty wild!”

During his time at BGSU, Miller was president of Sigma Phi Epsilon fraternity, worked for BG 24 News and was Freddie Falcon.

“I had a lot of good and different experiences during my time at Bowling Green and because of that journey, it helped me find my passion,” he said.

Miller grew up in Dayton, Ohio, where his parents still reside. He and his husband, Jonathan, have two children, ages 3 and 4, who they adopted in 2012 and 2013. As strong advocates for adoption, their story was recently featured on People.com.

“Adopting our two kids and becoming a father, by far, have been the best things to happen to me,” he said. “It’s been my favorite story and happens to be mine. “I feel like the luckiest man alive.”