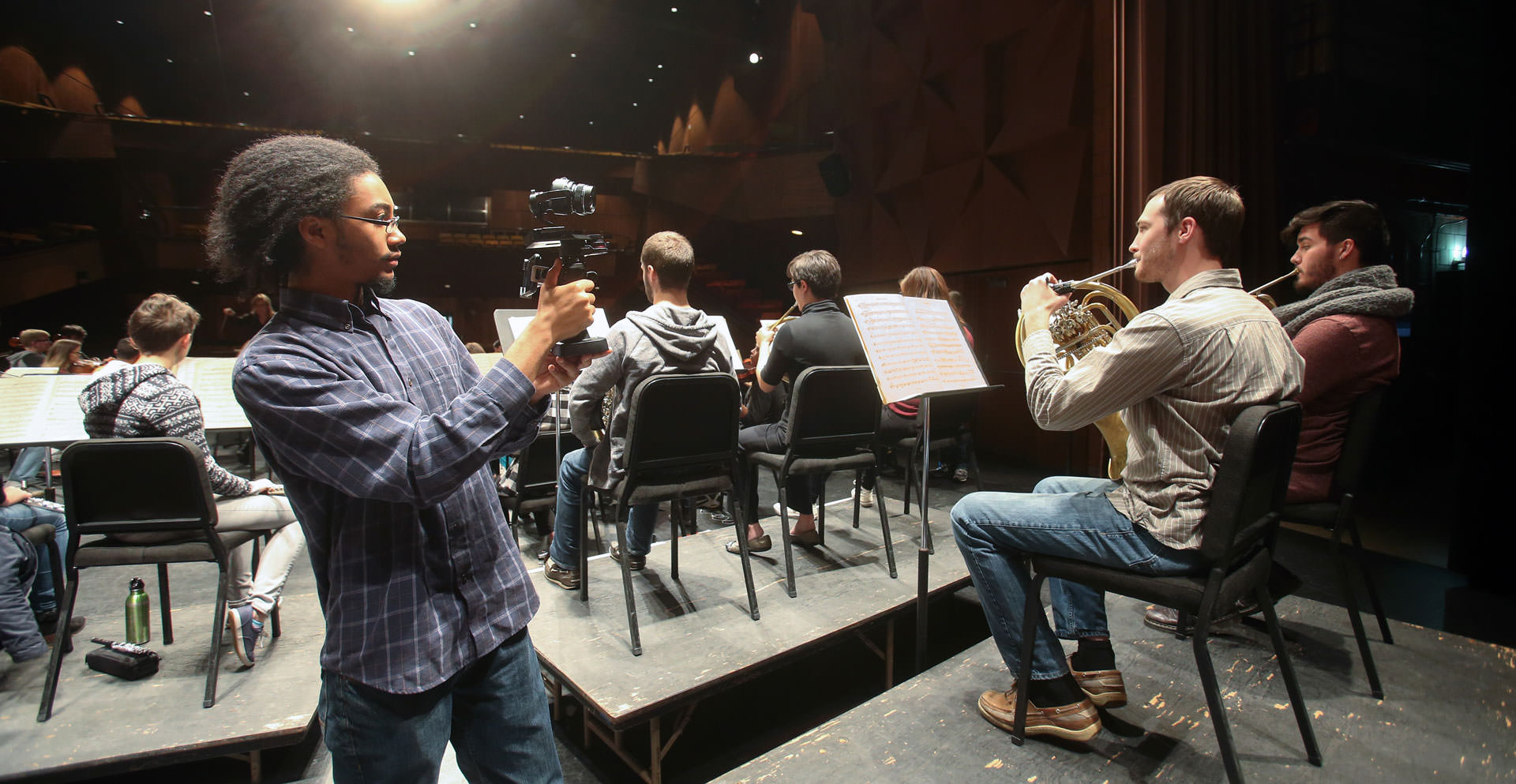 Gregory Shaw was in New Orleans two weeks before Hurricane Katrina devastated the region in 2005. The city and Katrina’s aftermath left an indelible mark on a young boy’s mind that has stayed with him for more than a decade.

He felt like he owed something to the city and vowed he would return. With his own grit and determination, Shaw returned to New Orleans to share his talents and gratitude to the city that introduced him to the glorious music, food and festivals that define The Big Easy.

The College of Arts and Sciences' film production student, who graduates from Bowling Green State University on December 17, returned to New Orleans in 2015 to pursue an internship in the film industry. He took a chance without a confirmed commitment for work, but he was confident the summer experiences would pay off in experience and connections.

It wasn’t the first time he had to push through adversity to reach a goal. As a young teen he was diagnosed with scoliosis, curvature of the spine. At 16, his dreams were shattered when he had to have spinal surgery that left him having to relearn how to walk and to rethink his future plans.

“I remember being really down and out,” Shaw said of his post-surgery recovery.

The time recuperating found him spending time at a hobby he’d started when he was 8 after receiving a video camera as a gift.

“I was always creating short videos when I was a little," Shaw said. "It was something I enjoyed.”

The video camera provided a distraction from his health issues and helped him push through rehabilitation. Shaw worked hard to improve his film skills and at one point in the process, realized, “That was a defining moment in my life.”

From that point forward, his focus was on film production. He transferred to a performing arts school for his senior year of high school where he was involved in a TEDx production and gained hands-on experience working with all the equipment. “It was an awesome opportunity,” that furthered his determination to study film production in college.

His college search looked for a university that was far enough away from his Harrisburg, Pennsylvania, hometown, but, more important, had film production. He had never heard of BGSU nor ever traveled to Ohio, but after his first visit, the campus felt comfortable and he knew he had found his new home.

While the financing was difficult with out-of-state tuition and general expenses of a university education, Shaw knew the cost of attending Bowling Green State University would become an investment in his career. He also had the support of his family, whenever he needed encouragement that he was headed in the right direction.

He is quick to point out that BGSU has offered him so many beneficial opportunities, from working at WBGU-TV to great faculty as well as the expectation to do internships.

“Working at WBGU-TV was my first step through the door, and where I learned about the television side of film production,” Shaw said. “It was a different perspective, but it also gave me lots of experience and lots of confidence in my abilities.”

The WBGU experience also solidified the skills that helped him acquire his internship at The Greenhouse Collective, his company of choice. For his internship, he knew he wanted to return to New Orleans, but he also knew it was important “to get out of my comfort zone.”

“I didn’t have a place to stay and the company didn’t have a budget to pay me, but they promised me lots of experience,” Shaw said.

He became their “go-to guy,” running errands, setting up meetings, making travel arrangements for films’ casts, some camera and production work, and helping wherever he was needed. The work was exactly what he wants to do in the industry, and by the end of the internship he had gained their trust and was put on the payroll. He achieved his goal of being viewed as a professional and an asset in a big city environment.

“Working at WBGU-TV was my first step through the door, and where I learned about the television side of film production...It was a different perspective, but it also gave me lots of experience and lots of confidence in my abilities.”

This fall he has been working for Hart Inc. Hart Producer/Director Nick Army, who helped train Shaw at WBGU, said “Greg is a driven, hardworking filmmaker and an indispensable part of our team. He has done work for clients all across the country and has a very strong, diverse portfolio. He is also incredibly motivated and reliable.

“His experience working on many sets makes him a well-rounded crew member and he’s so easy going and positive. Everything’s a little better when Greg is around.”

Throughout his experiences, Shaw has appreciated working with people who take their jobs seriously and who also had the time to train him.

“I love what I do," he said. "I love talking with people. I’ve learned one of the keys in this industry is who you know.”

Shaw plans to put his name out there and to be known as a valuable team member.

He plans to continue working for companies and gaining the skills, connections and confidence to eventually become a film producer. He doesn’t necessarily have a Hollywood dream, but he wants to allow stories to be told.

"It’s always about the story,” he said.