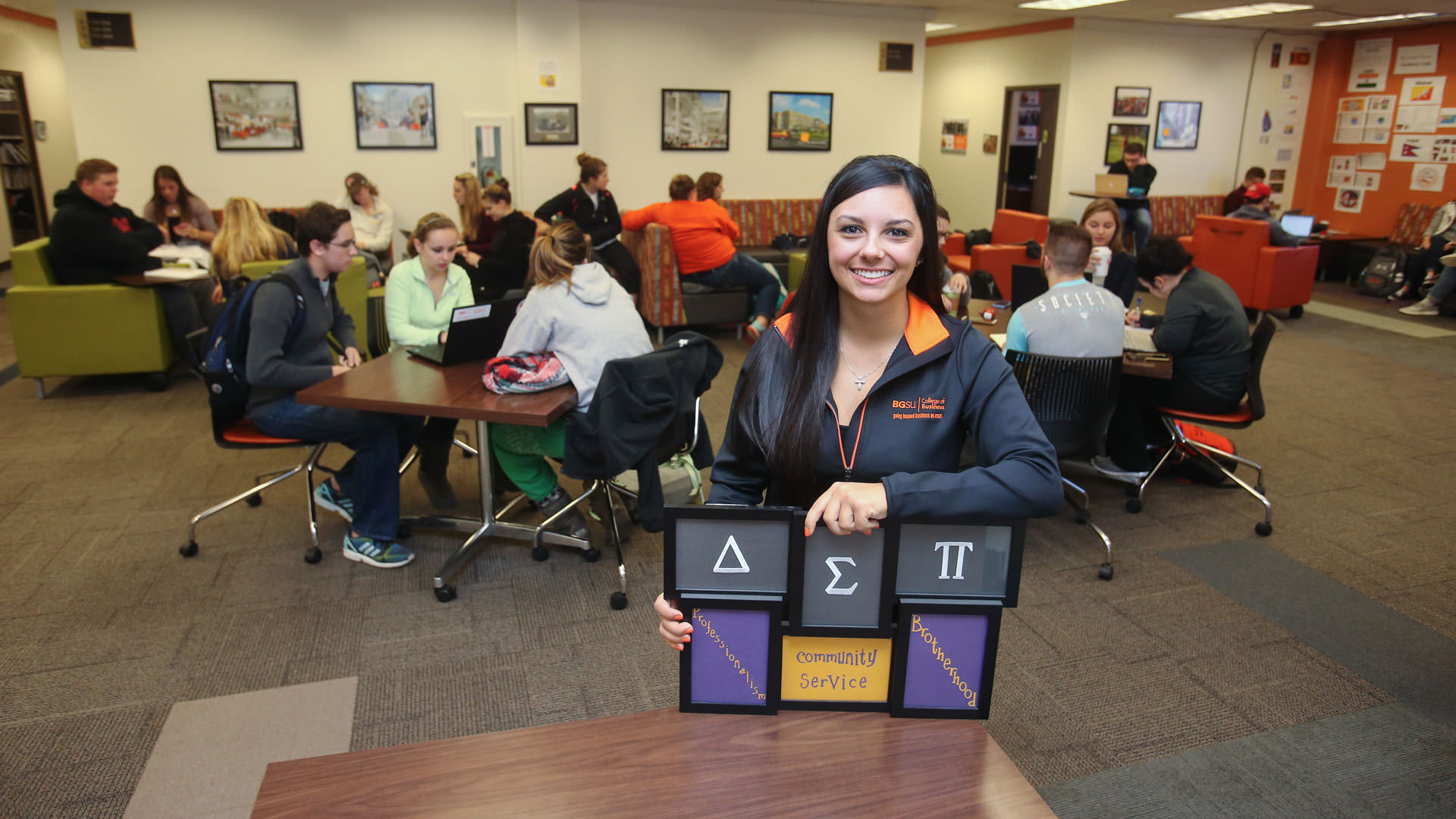 Even though Raven Aurand grew up just 30 minutes from Bowling Green State University, she didn’t realize how special the University was until she experienced it firsthand.

Not only is Aurand graduating with a Bachelor of Science in Business Administration with a dual specialization in business analytics and intelligence and management with a focus in human resources, but she already has a job lined up with Eaton Corporation In Raleigh, North Carolina.

“First, I picked BGSU because I live 30 minutes away,” said Aurand, who is from Arcadia, Ohio, a “really small village” in Hancock County outside of Findlay. “For the longest time I was actually going to commute. I knew the University had a good business program, but I didn’t understand how good of a business program it was or how engaged Dean (Ray) Braun is with the college and the students.”

While at BGSU, Aurand was a student ambassador for the College of Business and an active member in the professional business fraternity Delta Sigma Pi, serving as president, senior vice president and director of fundraising.

She gained vast experience through her involvement in both activities.

As a student ambassador, Aurand was in charge of connecting prospective students, current students and alumni back to the College of Business. With prospective students, that included giving tours around the college and talking about her experiences. For current students, she helped create events to get them engaged with the college “because if students are engaged with the school, they’re more likely to remain in school and have better grades and better jobs after graduation.” With alumni, she went to events and talked about how alumni contributions to the University help students accomplish their goals and become young professionals.

“I’ve had so many great mentors here at Bowling Green that I want to be able to be that person for other students.”

Also, as an ambassador, she was able to visit Arizona with the dean to network with alumni, which she said was an “amazing experience.”

“Originally, when I started college, I thought Disney was a company that I wanted to work for for the rest of my life, I wanted to live in Orlando,” she said. “But after I worked there I realized it wasn’t really what I wanted.

“Working for Bendix, I knew I loved working with people but I also wanted to work on the strategic mathematical side of things, so that’s why I added business analytics to my major.”

Aurand said there’s a strong need in larger organizations for HR analysts, which is what she has been hired to do for Eatonin North Carolina.

“As an HR analyst, I am able to merge both the things that I really enjoy doing: working with people and exploring the strategic side of tech,” she said.

In addition to traveling to Arizona, Aurand, who earned a 3.3 GPA, got to visit Washington, D.C., and several beaches on the East Coast as she networked with other Deltasig members.

She credits Braun for other out-of-classroom experiences that have helped prepare her for the business world.

“He puts on events for the students all the time,” Aurand said. “He’ll have what he calls the ‘Dean’s Practical Guide to Business.’ You’ll learn how to drink wine in a formal setting and learn dining etiquette — before I came to school I didn’t even know dining etiquette was a skill. He did a golf workshop too for the students, and I took advantage of that opportunity. Now, I’m actually kind of decent at golfing. I golfed with the alumni in Arizona and it was because of the golf workshop.”

Now, not only is Aurand advising her sister, a senior in high school, to go to BGSU, but she wouldn’t mind returning to campus after “she’s been in the field for five, 10, 15 years” to be a professor at the University.

“I want to be able to make an impression on students and help them find their passion and be a mentor to them,” said Aurand, essentially returning the favor someday to BGSU’s engaging faculty. “I’ve had so many great mentors here at Bowling Green that I want to be able to be that person for other students.”