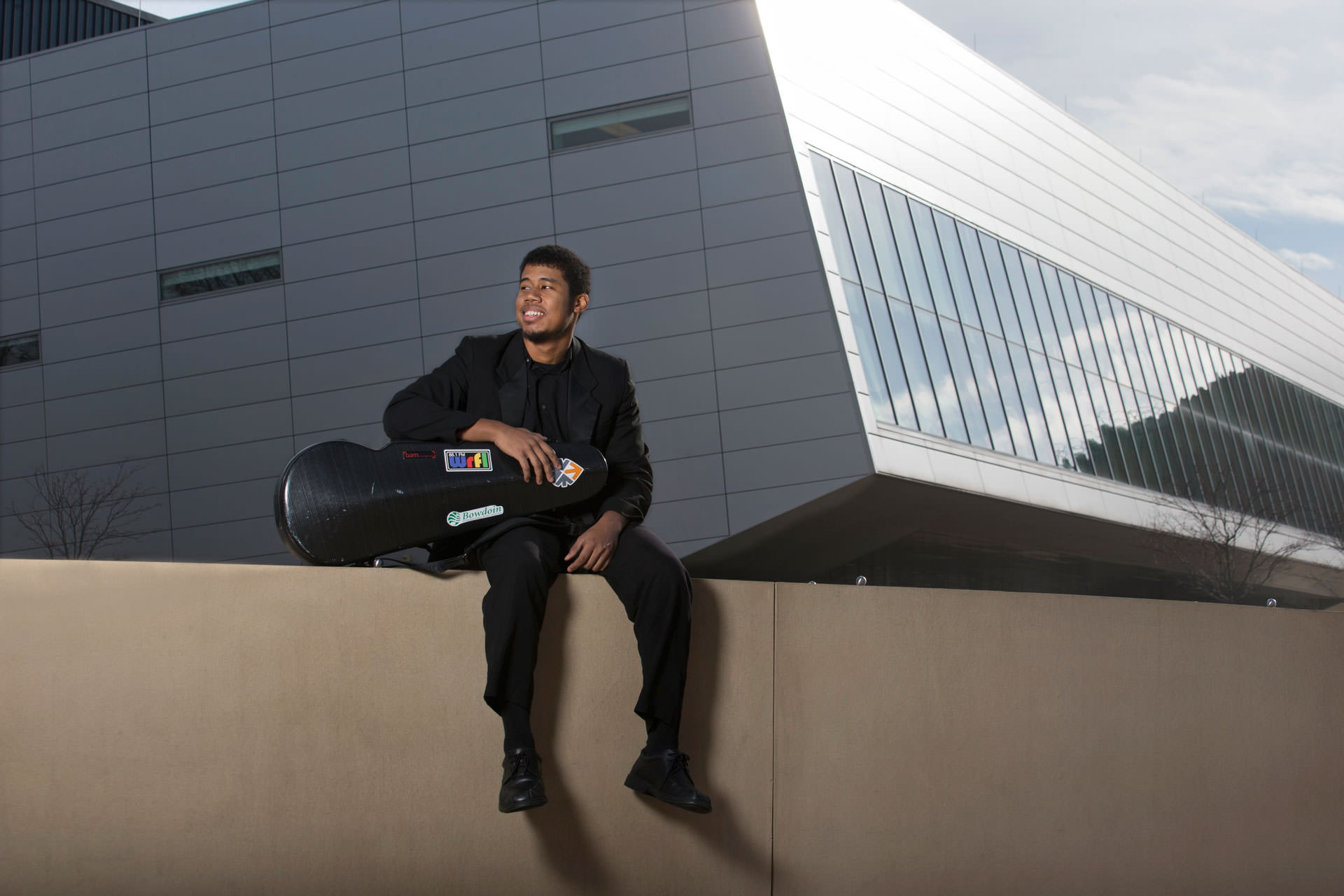 A conversation of music

If it weren’t for Caleb Georges’ love of the viola, he probably wouldn’t have attended Bowling Green State University.

Georges, who is from Babonneau, St. Lucia, started playing the viola when he was 13 years old. His first teacher of the instrument that he said “is not as scratchy as the violin,” Diane Cline Hastings, was a recent graduate of BGSU at the time. He said she really pushed him to go to college and to perform at summer musical festivals so he could be seen.

“I had a few lessons with him and stayed in touch and that’s how I got to know Bowling Green,” said Georges, who is graduating from BGSU with a Bachelor of Arts in musical performance from the College of Musical Arts with a 3.67 GPA.

Georges started playing the piano when he was 7, but always dreamed of the violin, which, ultimately, he did not like. Instead, he chose the viola, which “is played similarly, but has lower strings and sits in the middle range between the violin and cello.

“I was drawn to the viola because I liked the tone, the lower sound,” he said. “I also liked the fact that it usually plays the harmony instead of the melody, which is what you hear all the time. It’s pretty cool to back that up.”

“Things are more fast paced here, and you can get things done very quickly and easily here. People also take their work more seriously here. It’s different back home because it’s very laid back and people take their time.”

Thanks to Daline’s mentorship, Georges said he has seen much improvement in his own ability.

“I’ve had a lesson with him every week I’ve been here,” Georges said. “He pushed me a lot to be a better musician, and he believed in me more than I did myself. Certainly, I’ve grown and developed more as a musician because of him. I’ve learned to play a lot better than when I came here.”

Georges has had ample opportunities to perform during his time at BGSU.

“I’ve been able to play at weddings and stuff like that,” he said. “I’m also a substitute in the Lima Symphony, and have been a musician for them for two years. Around the area, there are a lot of performance opportunities, so that’s been good.”

His favorite experience has been playing with the concertmaster of the Berlin Philharmonic not once, but twice.

“I was very privileged to play with concertmaster Noah Bendix-Balgley twice as a member of the BGSU Philharmonia,” Georges said. “That was a very rare opportunity, and I’m very happy that I got to play with him. It was very inspiring, and I am grateful for that chance.”

Being an International student, Georges said just by being on Bowling Green’s campus he learned many differences between the United States and St. Lucia. 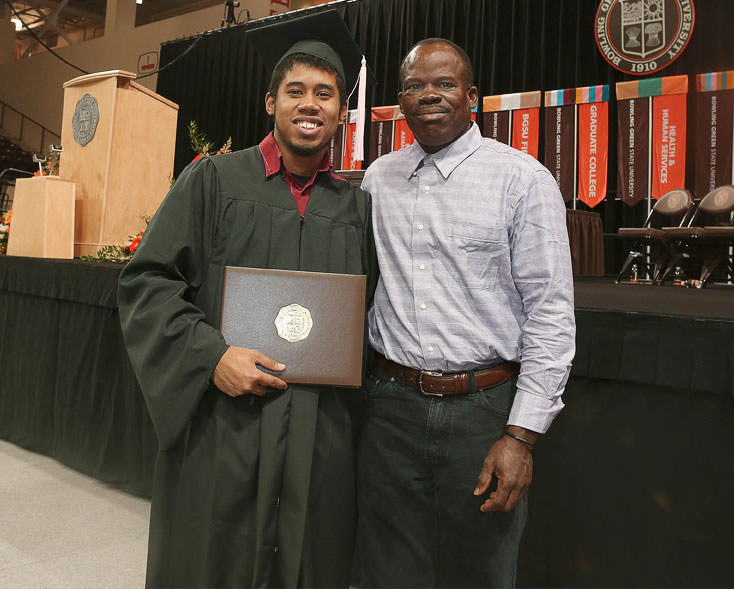 Caleb Georges and his father, both of St. Lucia, share a moment after commencement.

“Being in America itself is a total different culture from home, so I have learned a lot, like how to really communicate with people,” he said. “I’ve made a lot of friends at BGSU, which has been really nice, and life lessons like how to sustain relationships, stuff like that.

“Things are more fast paced here, and you can get things done very quickly and easily here. People also take their work more seriously here. It’s different back home because it’s very laid back and people take their time.”

There’s one big difference that Georges really has enjoyed: the weather.

“I actually prefer the cold than the heat,” he said. “I get really frustrated when it’s too hot and I don’t feel like doing anything — I guess that’s why it’s very laid back in St. Lucia.”

Professionally, Georges aspires to be a part of a professional chamber ensemble to inspire others with his music.

“I think a lot of people need to be inspired,” he said, “and also just bringing people in general closer together through of music. We kind of need that in this day and age.”

Classical music is Georges’ favorite style of music, and he thinks not enough people give it a chance in today’s world — plus, it’s just fun to play.

“Many people think classical music is just for the wealthy and they’re not really interested in it because they haven’t experienced it,” he said, adding that he likes the challenge of playing in an ensemble. “Unlike orchestra, when you’re with a lot of other people, you’re on your own with your own part, but at the same time you play with two or three other people. It’s easier to manage, but it’s also very fun just to see how you can have conversations with music.

“I also get very anxious playing solo, so this is an in-between with orchestra and solo. You still have responsibilities of playing together, but then you also get to play a solo. That’s what I really enjoy about it.”