This summer I was given a very exciting opportunity, and, to be honest, I had no idea what to expect. I was thankful this summer that I had the opportunity to move to New York and work for TIME Inc. Video. TIME Magazine owns many brands such as Sports Illustrated, People, Food and Wine, Essence and Golf.com. I was hired as a production assistant to work daily in one of four video studios in which we produce content.

I lived in New Jersey and commuted each morning into New York. The day started by waking up at 4:30 a.m., biking to the New Jersey transit train and riding it to another train to get to the World Trade Center, where my job was located. I typically did not get home until 8 or 9 p.m., but I loved the hustle that came along with the job. By the time I left, I think I developed a New Jersey accent.

Going into the job, I was immediately put to the test with all that I have learned in my media production and studies major at Bowling Green State University. On the first day, I was on set with a live show called “SI Now” for Sports Illustrated. I was greeted by the host, crew and a fast-paced environment that I have not quite experienced. The first day’s guests were various college basketball players preparing to be drafted by the NBA. It was nice seeing some guys around my age. One of the players, Malik Beasley, drafted by the Denver Nuggets out of Florida State University, even got in a Snapchat story with me. The first week included a lot of carrying set furniture and tables in and out of studios, but I was eventually given more responsibility.

When put into another studio the following week, we were doing six to seven shoots a day. I was the right-hand man for the technical director, and between the two of us, we did everything. I setup the lighting, put microphones on talent and operated one of the cameras being used for the content. My most exciting piece was being the camera operator for a one-on-one interview with hall of fame pitcher Jim Palmer — what a dream! I met celebrities on a daily basis, and I got paid to do it! At one point, I met Shaun T, the choreographer of the “Insanity” workout, and he told me I could use another cycle of his workout regimen — thanks, Shaun T! Throughout the months that I spent there, I was meeting celebrities anywhere from actress Ashley Tisdale to father-son baseball greats Ken Griffey Jr. and Ken Griffey Sr. I was also given the opportunity to work on the production of the “People Now” concert series, which allowed me to work with pop singers Daya and Nathan Sykes. Being able to work with top professionals gave me a great outlook on how show business works. 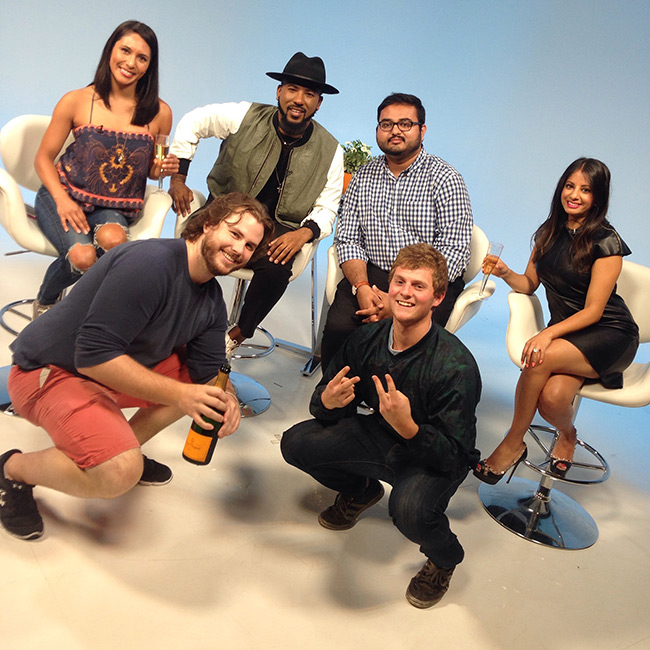 Outside of the studios, I would run occasional errands around the city by commuting via subway and taxi and picking up equipment for the studios. At one point, I recall carrying a roll of curtain that was about 7 feet tall. Hailing a taxi with a roll of curtain as big as Shaquille O’Neal was quite the experience, and even though I was in the Big Apple I still managed to get quite a few stares.

The New Jersey life treated me well. Weekend adventures included music, camping, and the occasional secret swimming hole. Being completely submerged in the city life was amazing — even the food was as diverse as the people — and I enjoyed every aspect of it. The culture in New York put a smile on my face, and it certainly puts things in perspective seeing people from all walks of life pursuing their dreams. Being able to experience life in New York before I have to commit to living there was a beautiful opportunity, and the city life presented such an exciting lifestyle that will help me along my young professional career. I am truly thankful for job and all the connections I made in the summer of 2016.