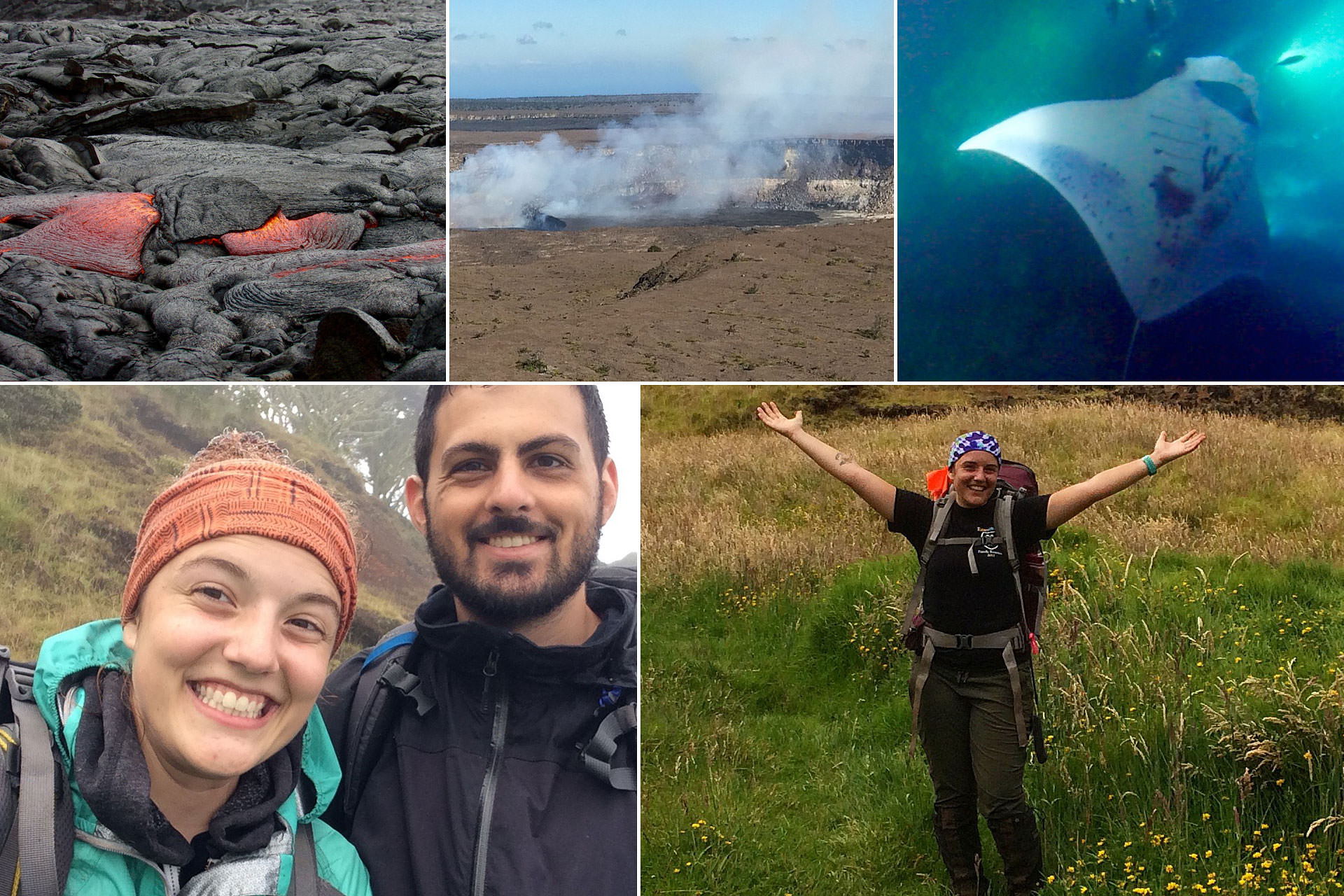 My summer was spent almost 5,000 miles away from Bowling Green State University on an island that most people would describe as “paradise.” On the Big Island of Hawaii I conducted my master’s research, which involved me living there for three months. I quickly learned that working in Hawaii was not going to be nearly as glamorous as everyone else seemed to think it was. I faced a number of challenges during my project, but every step of the way I learned something new and I am so thankful for the experience.

My research is looking at the small bugs that live in the leaves that litter the ground within forests. These bugs are incredibly important because they are breaking apart the big leaves that are falling down to the ground, which makes them more appetizing to bacteria and fungi that decompose the leaves even more. While this process of decomposition is important for the obvious reason of getting rid of dead things, it also does something that’s vital to most ecosystems: It recycles the nutrients from the dead things back into the soil for plants to use and continue to grow. This is even more important in tropical forests, like those in Hawaii, because their soils are already very nutrient limited. Tropical soils to a tree would be like humans eating only ice cubes; there’s no nutritional value. But when these little bugs are present and aiding in decomposition, the tropical soils can become as nutritious to the trees as kale is to people.

To me, this is incredible, and I am very interested to know what makes these little bugs tick. I wanted to know if nutrition was just as important to these bugs. Could abundance of a nutrient increase the number of bugs? Would it make them more active in decomposition because they would move quicker to get this nutrient that they need? 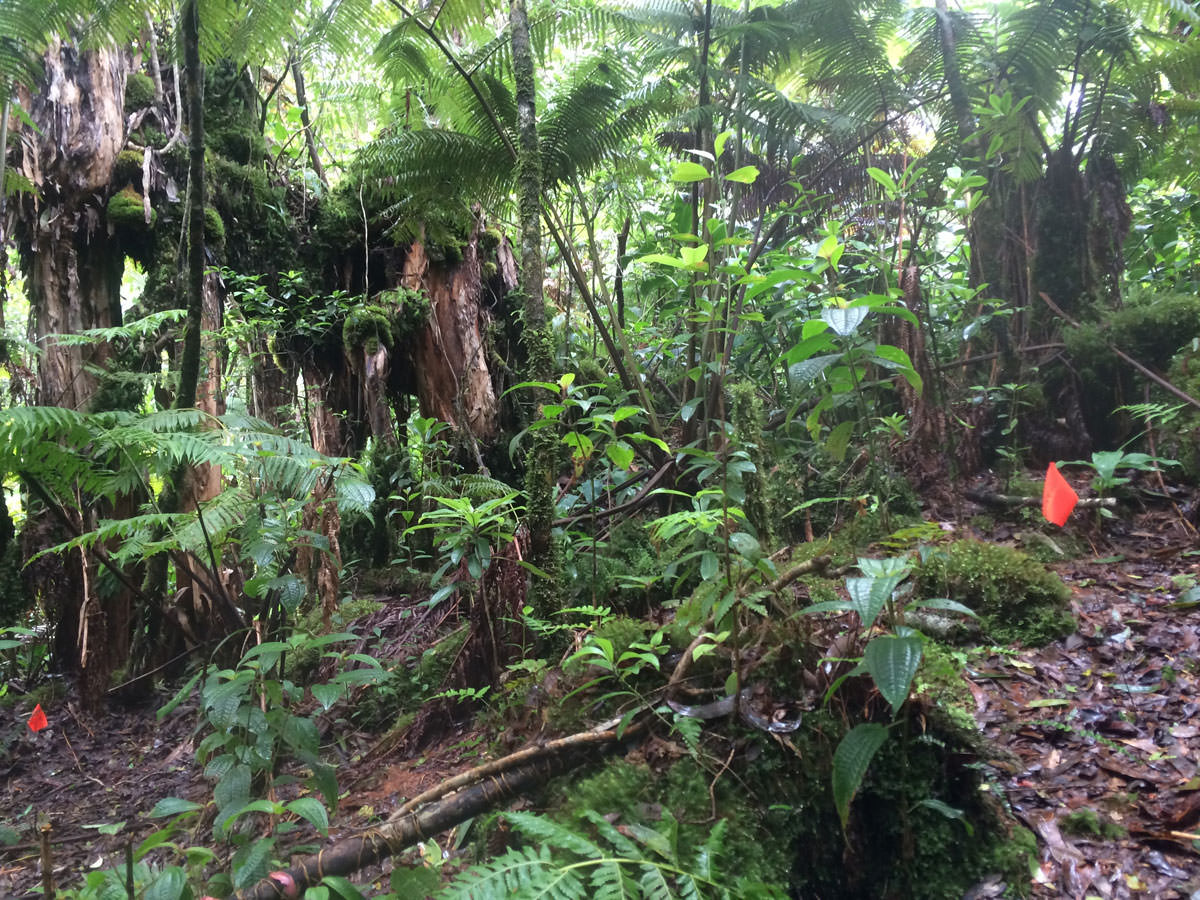 To help raise money to support my research, I used crowdfunding. Not only did it help with financial support, but for those who visited my site, it was a way to share information about my project and promote the importance of scientific research. The title of my personal site kind of summed up my project: lava, nutrients, bugs, life and Hawaii. I ended up raising $2,005. It was honestly really surprising to me that that many people were interested and wanted to support me.

Hiking through the forest to conduct this project was no cakewalk. The terrain is wildly different from that of northwest Ohio. For example, there are actually a number of hills to walk up. To make matters worse, this is a rain forest and it does, in fact, rain every single day. This makes the hike even more interesting because the ground is soft, slippery and muddy. While this makes hiking difficult, it can also make things dangerous. The “trails” are cut by machete as you’re working your way to the plot. The forest is so efficient at growing that you actually have to cut a new trail each time you visit the plots. As you can imagine, slick ground and sharp machetes aren’t a great match. During one particularly rainy hike, my research assistant Rob Baroudi was walking ahead of me cutting the trail. While climbing over a fallen tree, also incredibly common in the tropical forest, he slipped and fell directly on the saw edge of the machete. Luckily, we both had first aid kits, but we still had to quickly exit the rainy forest and drive an hour and a half to the nearest hospital.

There are no snakes or large predatory mammals in Hawaii, but there are still dangerous animals you have to look out for when hiking in the forest. Cows and boars in particular have invaded some areas of the tropical forest. Native species in Hawaii consist of birds, bugs, and one species of bat. As you may notice, there are a number of open positions within that food web that another animal could fill. So, when livestock were introduced to the island many years ago, their populations increased exponentially as they gorged themselves on the abundance of resources and the lack of predators.

The majority of our forest encounters were with wild boars, which have become so populous that locals hunt them with large packs of dogs. Encounters with hunters were minimal, but encounters with boars were almost guaranteed each time we went into the field. You might be wondering why would I be scared of running into a pig in the forest? Well, these pigs are big, some of them weighing more than 200 pounds, and when you startle one they charge at you. Because they’re so big they can inflict some serious damage and your only hope is to run to the side and scale a tree as quick as you can. You want to run to the side because the boar cannot change direction once it’s charging you, but sometimes the simple change in direction isn’t enough and they will come after you again, which is why you also need to climb a tree.

Because of hunting in the area, many of the boars will run off if you yell loud enough, unless you run into a female with young ones, which is exactly the situation we found ourselves in our first day alone in the field. We had just finished setting up my project at two of the elevational plots in a transect that had three total plots and were on our way to the final plot. In between the patch of forest there’s a grassy opening that we walk through because it’s easier than cutting our way through the forest. Hidden in the grass there was a piglet that did not show itself until we were almost on top of it. It jumped higher than the tall grass and made a noise that was surely a call to its mom. Hearts racing and running backward, we were on the lookout for an angry blur of black racing toward us. Fortunately, the piglet’s call must not have reached its mom and we cut back into the dense forest to go around where it was still resting in the grass.

I did have some less dramatic experiences during my summer in Hawaii that I will never forget. One was snorkeling in the Pacific Ocean. Here the sea turtles swim right up to you as you’re floating on the surface. Being able to watch them swim and eat sea grass in their natural habitat is so incredible. I also had the opportunity to snorkel at night with Coastal Manta Rays. We essentially held onto surf boards with lights built into them and the mantas came to us. The lights attract plankton, small plants that float in the water, which the manta rays eat. On average these manta rays have a wingspan of 8-12 feet, but one female that frequents the area where we snorkeled was 14 feet, tip to tip. So, these are incredibly large creatures, which makes it even more incredible to see them gliding gracefully through the water. As if that weren’t cool enough, they also get incredibly close to you floating on the surface of the water — so close that you almost have to lift yourself up out of the water to avoid them hitting you, and you can see all of the little organs within their gills. This was my absolute favorite experience during this summer.

Another incredible opportunity we had was to see an active lava flow. Pahoehoe lava that flows from Hawaii’s volcanoes is relatively slow, which is great for people to be able to escape its path and for viewing purposes. To get out to see the lava you must first walk 4.5 miles on the emergency road into Volcanoes National Park, but it’s absolutely worth it. The red-hot lava spews out for only a few moments in one place before interaction with the air turns it black and hard, only for it to break through on another section of the flow. It is constantly changing and moving. I could have sat and watched it for days without getting bored. The lava flow was also doing something that it hadn’t done since 2013: flowing into the ocean. We walked out over mounds of old lava from past flows until reaching a cliff where ocean meets island. Here there is an enormous amount of steam rising as the hot lava is cooled by the ocean. As the waves recede in preparation to crash into the shore again, you can see the red, molten lava pouring onto the black sand beach. This was so incredible to me because it is the reason that the Hawaiian Islands are present. Without this process of lava meeting ocean forcing it to cool into rock, there would be no Hawaii. And I had the opportunity to stand and physically watch this take place. It was absolutely unforgettable.

I’m so thankful for the experiences I had while in Hawaii. They were all truly unforgettable and absolutely helped me to grow as a person. I can’t wait to start analyzing my data and discovering what my results hold. If you’re interested in learning more about my research and the experiences I’ve had in Hawaii, please visit my blog. If you’re interested in researching something like this or looking to volunteer to get lab experience, please reach out to the Pelini lab and feel free to email me at carir@bgsu.edu.