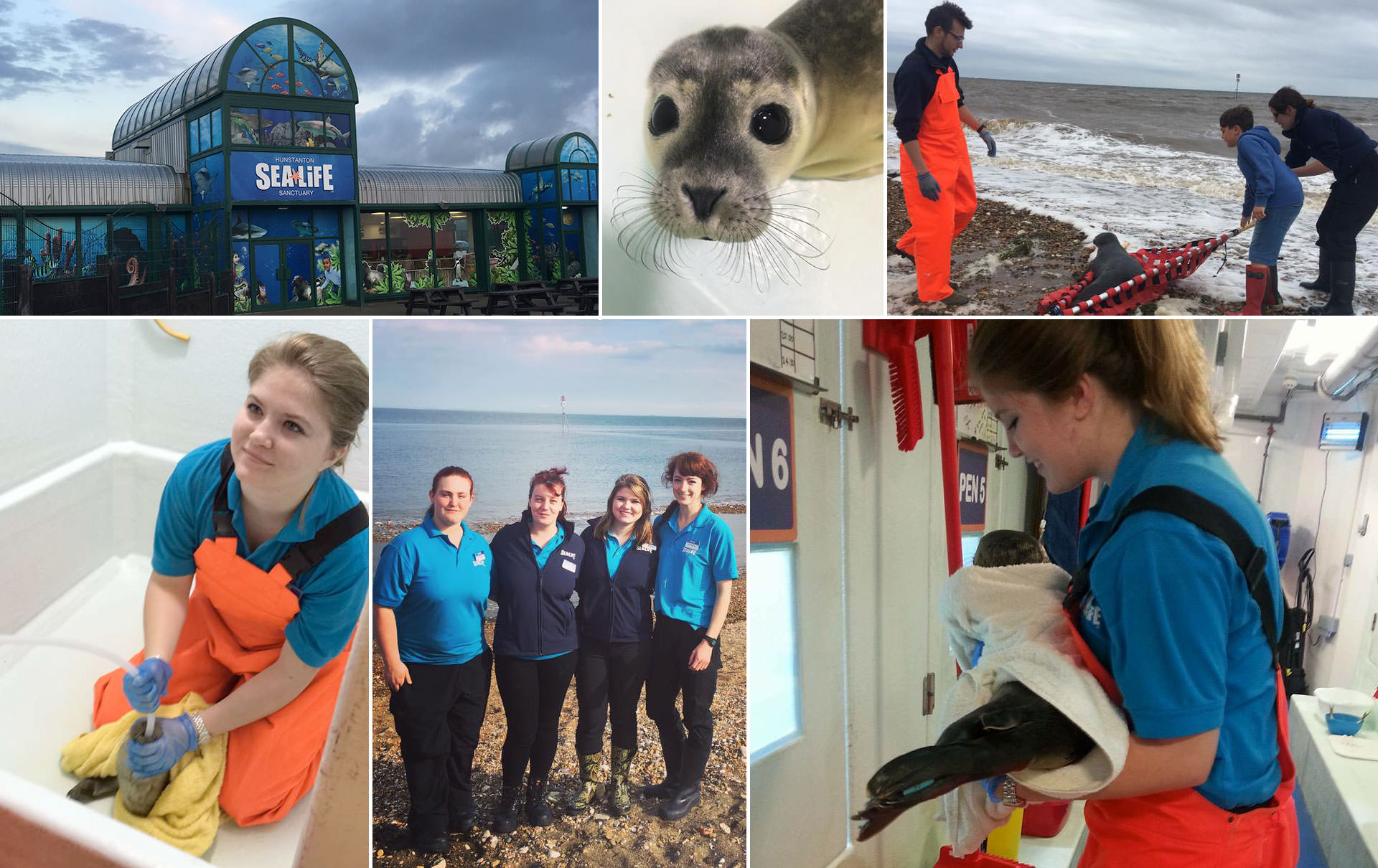 I’m currently a senior at Bowling Green State University and am majoring in biology with specializations in both marine biology and conservation ecology. One day I hope to utilize my degree at a rescue and rehabilitation center for marine mammals, where I can care for wild creatures and educate the public on our efforts and the importance of conserving our oceans. Having grown up in a family of scuba divers and getting certified at the age of 10, I’ve had the chance to see firsthand how our actions as human beings impact aquatic life. It’s this insight that has pushed my desire for a career in conservation and rehabilitation. I feel compelled to help save the coral reefs and magnificent creatures of the sea. I am only one person, but I have a voice and the knowledge to help make a change.

This summer, I had the incredible opportunity to work with wild seals in England. I spent almost three months in Hunstanton, Norfolk, northeast of Cambridge on the coast of the North Sea, working at the Sea Life Sanctuary where its mission is to rescue and rehabilitate common seals and gray seals. I knew I wanted to spend my summer in England, visiting my mom’s side of the family and my boyfriend, who’s stationed at an Air Force base there. Instead of just sitting around the homes of my family members for three months, I wanted to do something productive while I was there. As my mom was born and raised in England and my dad was born and raised in Michigan, I have dual citizenship. This means that I can reside and work in either country. This made me look like a more eligible candidate, even though the internship is unpaid and I could’ve technically interned without being a UK citizen. I reached out to different aquariums in England and luckily I landed at Hunstanton Sea Life Sanctuary — with one catch. During the interview, I was told an internship position was mine if I wanted it and that considering I had to earn the money to travel to England, afford my room and board, and deal with the exchange rate, I could have a month to let them know. I didn’t have any family in the Hunstanton area to stay with, but I knew I couldn’t let this opportunity pass me by. After about a month, I was well on my way to being able to afford it, but between school and work, I would be just short of what I needed to share a place in Hunstanton with one of the other interns. I turned to GoFundMe and was able to raise the money I needed thanks to those who believed in me and my dream.

This summer, we broke our previous record for the number of seals we rescued in a year, and we haven’t even entered gray pup season yet. A large portion of the seals that require our help enter our facility as abandoned pups. Common seal pup season ranges from about late May to early August while gray pup season ranges from early November to late January. These pups can be abandoned for any number of reasons. The more obvious reason is due to disease or birth defects, but stress is also fairly common. Mother seals may get stressed and head back out to sea, leaving the pup behind. A large stress factor is human interaction. Oftentimes tourists try to get close to the animal and take pictures or observe them up close and it spooks the seals, who flee instantly. Sometimes mothers go out for food and just never come back. We had a pup come in this season that we believe was born the same day we rescued her and think she and her mother were separated due to the current in the water. When pups are abandoned, they need assistance or they suffer. Around this time last year, the sanctuary had rescued a total of 24 seals since the beginning of the year. We rescued 26 seals in just three months. All 26 seals were common seals and only two seals were yearlings, or adults.

When working with abandoned pups, each pup may be at a different stage as far as eating and energy goes. Some pups came to us with their umbilical cords still attached and other pups came in at 2-3 weeks old. When a seal first enters our hospital, they are tube-fed 350 milliliters of Zoolyte, a liquid made up of vitamins and minerals that help the animal stay hydrated. If the seal is unable to keep the Zoolyte down, we try again in a few hours and keep an eye on it to make sure its health doesn’t decline. If the seal is able to keep the Zoolyte down, we move it on to fish soup. We make fish soup ourselves in lieu of the seal’s mother’s milk. It is fairly close in fat and nutritional value, and the seals don’t seem to mind it. In order to make fish soup we blend up herring, nutritional pellets, and Zoolyte until it is a nice, smooth liquid that will slide down the tube and into the seal’s stomach. The seals are on fish soup for a few days depending on its health. If the seal can keep it down, we then move on to force feeding. Force feeding is where things can get a little tricky and most likely where you have the highest chance of getting bitten. When tubing, or force feeding, we have to teach the seals how to eat whole fish. It normally took a few days to get the seal to swallow for themselves and once they did, we moved on to hand feeding, and eventually the feeding is just tossing a fish in a seal’s pen. 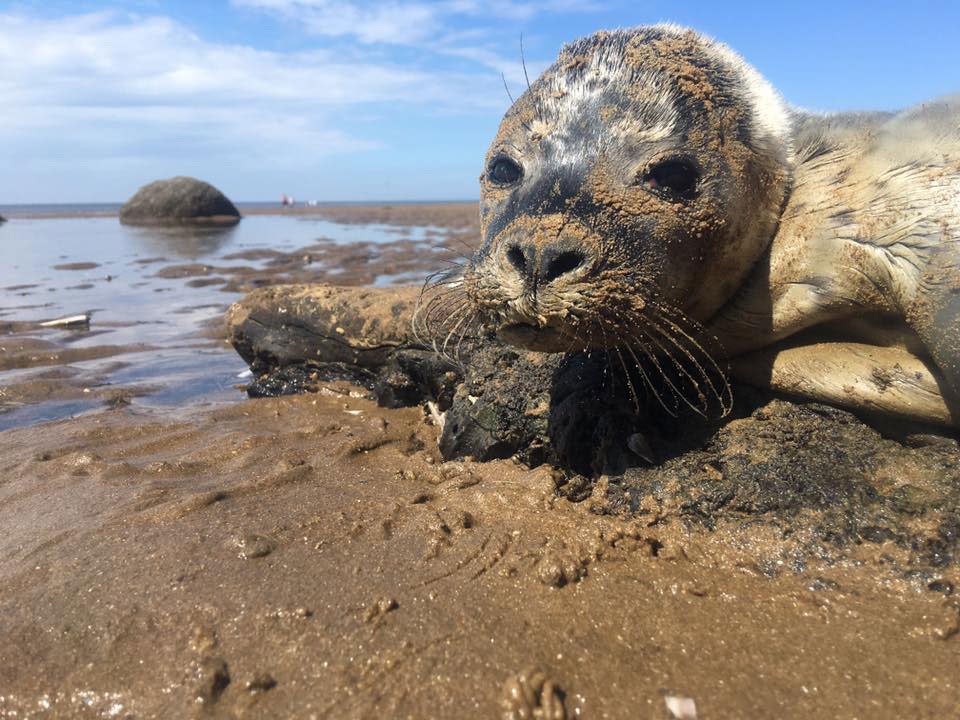 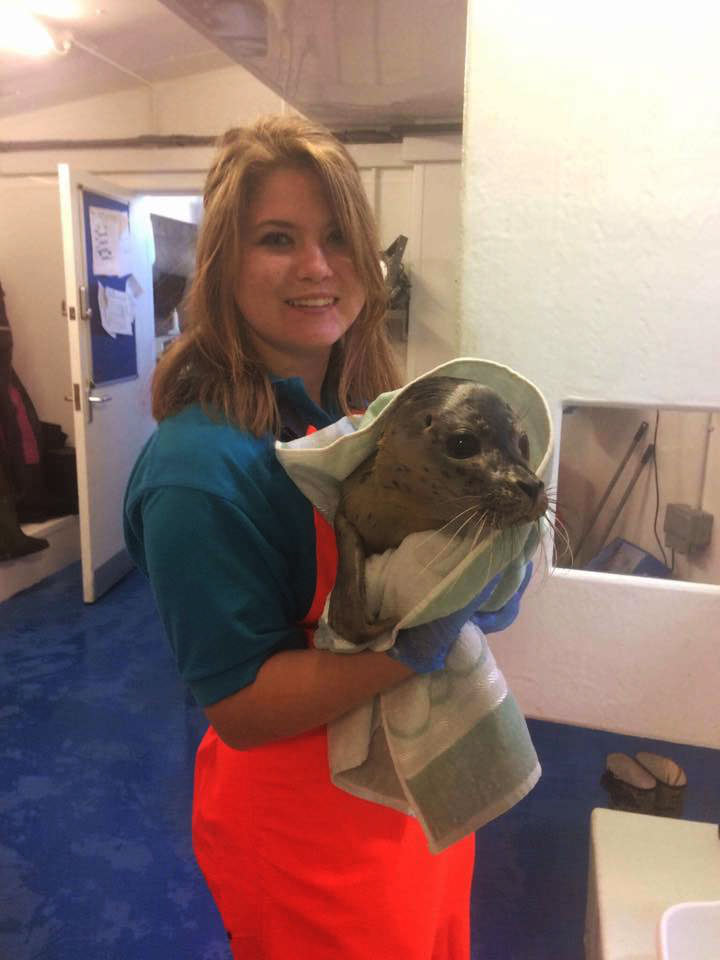 Bonnie after being rescued

Besides feeding, there was a lot of cleaning and organizational duties, as well as speaking to the public, going out on rescues and aiding in releases. When we had school groups come around, we used a plastic seal to show children our check-in procedures and how we feed the seals. The seal hospital had to constantly be cleaned between the amount of dishes used for feeding and prepping feeds, to seals constantly relieving themselves in their water, to water being on the floor from our boots. We were always receiving new donations of towels that had to be organized and put in the cupboard. There was always a new stock order coming in for the hospital and surfaces constantly needed to be wiped down. Every now and again we would have to drain the resident seal pool and scrub down the walls and floors. On the aquarium side, we cleaned the tanks, conducted water changes, learned about backwashes and tended to the water quality levels. I even had the opportunity to go on a “rescue” for the aquarium side when we went to a woman’s house and retrieved her fish because she was no longer well enough to care for them. The interns also weighed the penguins and nebulized a few of them that had respiratory infections.

My favorite duty of the internship had to be going on seal rescues and releases. For the releases, we would take two or three people each time. Depending on the size of the seal, we would either wrap the seal up in a towel and place it in a catch back or use one of the stretchers to capture the seal and carry it back to the rescue van. Sometimes the seals are healthy and just sunbathing, sometimes they get spooked back into the water, and other times the seals being reported are dead. My favorite was the rescue of Bonnie and Ecco. These two pups had found one another on the beach and had both been abandoned by their mothers. When we spoke to a member of the public, she said the pups had been playing not long before we had arrived, even though they were now resting. As we placed them in the capture bags, both had started to make noise and tried to squirm out of the bags. Once we arrived back at the seal hospital, we placed each one in its own separate pen. As we were conducting our check over, Natalie, the senior aquarist, noticed that Bonnie had a broken jaw and required extra special attention. We were told not to get too attached to Bonnie because it was possible that she would have to be euthanized. Bonnie ended up having surgery that placed a wire up through her jaw to fix it. Not only did this seal show no sign of pain when crying when we picked her up on the beach, but she didn't struggle any more when eating than any of the other abandoned pups. Shortly after I left, Bonnie had the wire removed from her jaw and was placed into a larger pen with more seals. She is now fattening up to be released.

I had an absolutely incredible experience this summer that I will carry with me for the rest of my life. I’ve made some awesome friends and worked with some pretty remarkable people. This internship has taught me so much and not only gave me experience in my field of interest, but in life itself. Living in a completely different country at such a young age, surrounded by completely new people can really teach you a lot about yourself. This opportunity showed me just how much support I have from friends and family and just how many people are interested in what it is that I want to do with my life. I can’t thank my family, friends and the Hunstanton Sea Life Sanctuary enough for the breathtaking experience that they’ve all allowed me to have, and for all pushing me further in life, and cementing my career goals. I can’t wait to see what my future has in store.