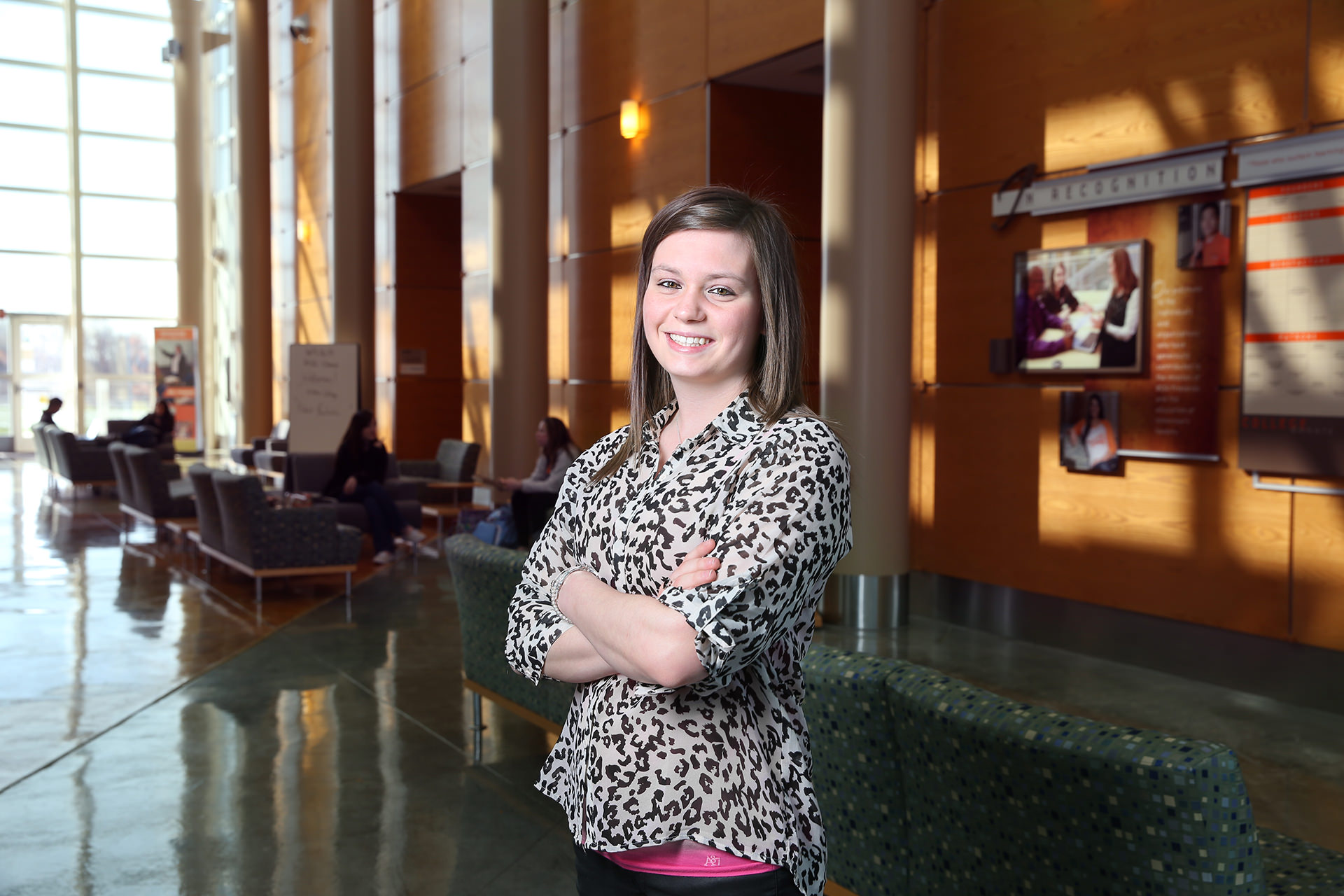 Reaching All of Her Goals

“Student Government changed my whole experience. It really took me out of my comfort zone and allowed me to broaden my horizons and grow as a leader”

On May 7, Rachael Cummings earned a bachelor’s degree in business administration and crossed the stage to receive her diploma with her fellow graduates. However, her college experience was much different than many of her peers.

As she began her college education at Bowling Green State University Firelands College, Cummings established two personal goals for herself. She wanted to graduate without any financial obligations and she wanted to make the most of her educational experience. By all accounts, she accomplished both goals.

According to Cummings, she mainly concentrated on acclimating to the college environment during her first year.

“I attended classes, did my homework, and then went home. I knew I wanted more from college and set higher aspirations in subsequent years,” Cummings said.

She decided to run for Student Government and was eventually elected president. That is when her path started to change.

“I could see that she was a natural leader,” said BGSU Firelands Director of Technology Support Services and then-Student Government Advisor Julie Hamann. “She had an acute understanding of the varied needs of our diverse student body and became a true advocate for all students.”

Hamann credited Cummings with creating new initiatives and reaffirming the need and role of students in the governance of the College. “Rachael made sure there was student representation on as many committees as possible and that had not happened for many years at BGSU Firelands,” said Hamann, whom Rachael credits as her mentor throughout college.

“Student Government changed my whole experience. It really took me out of my comfort zone and allowed me to broaden my horizons and grow as a leader,” Cummings said.

Highlights of her tenure on the leadership group included: planning entertaining events for her peers such as the annual Luau fundraiser and Homecoming; actively participating on Faculty Senate; breaking ground for the new Allied Health & Sciences Project with local dignitaries and elected officials; serving as a member of the 50th Anniversary steering committee; and representing the student body at a variety of venues in the community.

One of the greatest highlights of her career was being invited by United States Representative Marcy Kaptur to participate on a panel of speakers addressing college education and workforce development.

“It was an honor,” Cummings said. “Congresswoman Kaptur is an inspiration and role model as a woman in leadership and she has accomplished so much for her constituents. It was exciting to be on the panel.”

Cummings certainly achieved her goal of making the most of college, but her collegiate achievements are even more impressive when taking into account the time constraints of pursuing her second goal – to graduate without any debt.

Sixty-seven percent of college seniors who graduate in Ohio incur debt, with the average amount being more than $29,000. Cummings was determined not to be included in that statistic. To finance her education, Cummings worked three separate jobs during her college career.

“It was a juggling act at times,” she said. Balancing each of her three jobs, classroom time, homework, and student government responsibilities was a challenge, but she is confident she made the right decisions.

“Whatever time I lost for social endeavors and traditional fun, I gained in personal enrichment and growth," Cummings said. "The positive things I gained will stay with me for life.”

The fruits of her labors have been immediate. One of her jobs, a seasonal box runner at UPS, has turned into a career.

“My boss found out I was earning a business degree and offered me a management job,” she said. Cummings is now the preload supervisor at UPS, managing a shift and 16 people.

Like most recent graduates, Rachael is looking to the future. She would like to stay with UPS and is interested in moving up the ladder and into the lean systems office at the international deliver company.

“If opportunity knocks, I will be ready,” she said.