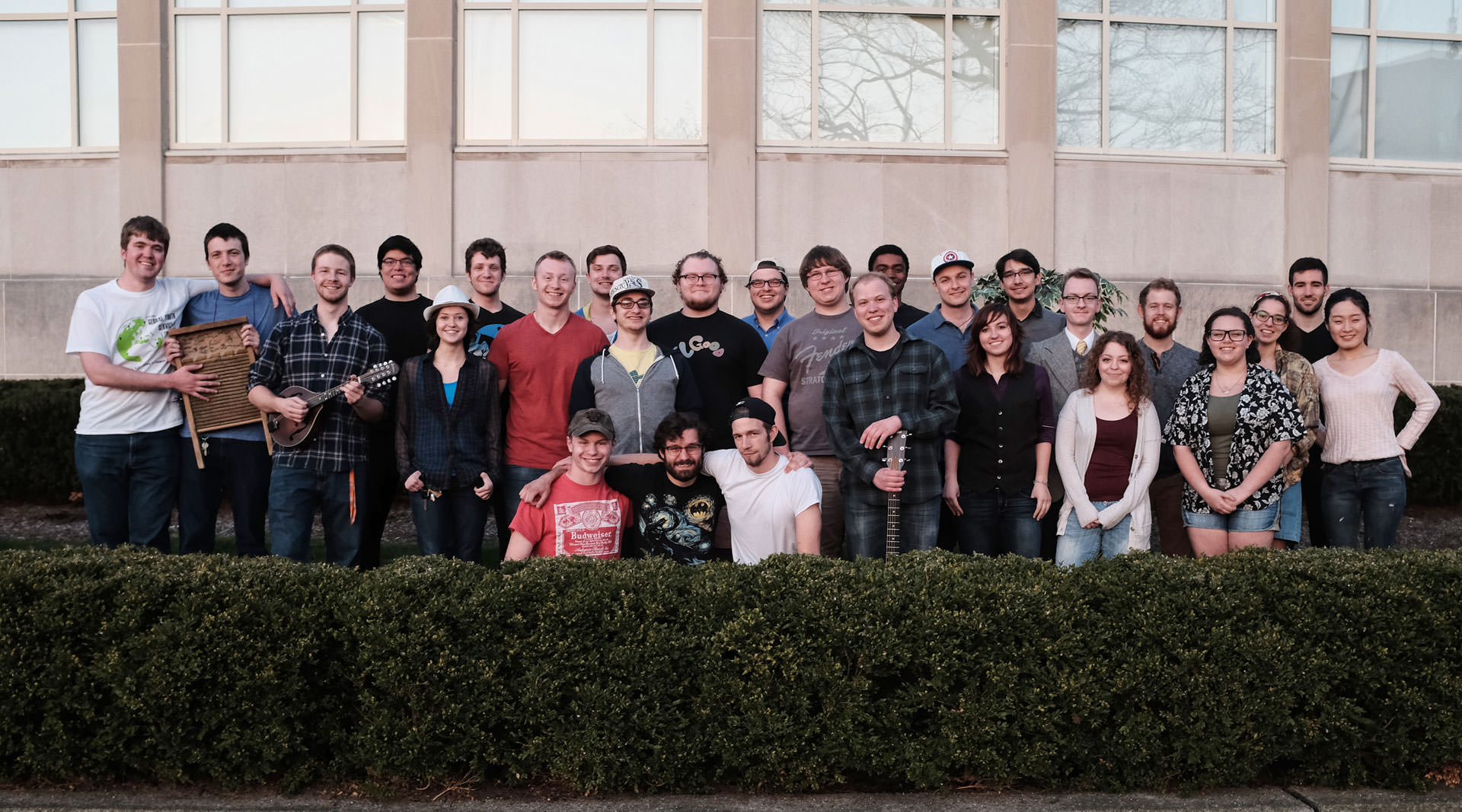 Putting down roots at BGSU

Mike Bryce helps spread love of music on, off campus

Thanks to Mike Bryce, even if students don’t enroll in the College of Musical Arts, they can still be engaged with music at Bowling Green State University.

Bryce, a double major in music (jazz guitar) and psychology from Pittsburgh, founded the Roots Music Club in August of 2014. He and other musicians met in 1002 Moore Musical Arts Center on a Tuesday night, and have continued meeting there on Tuesday nights ever since.

“The club started out small but grew pretty quickly,” said Bryce, who graduated May 6, 2016 and is planning to expand Roots Music Club to other universities. “It's a diverse group of musicians, singers, songwriters and music lovers.”

Bryce was into folk music when he formed the club but said he decided on roots music because it covers an array of styles, including folk, bluegrass, country, blues and Americana. 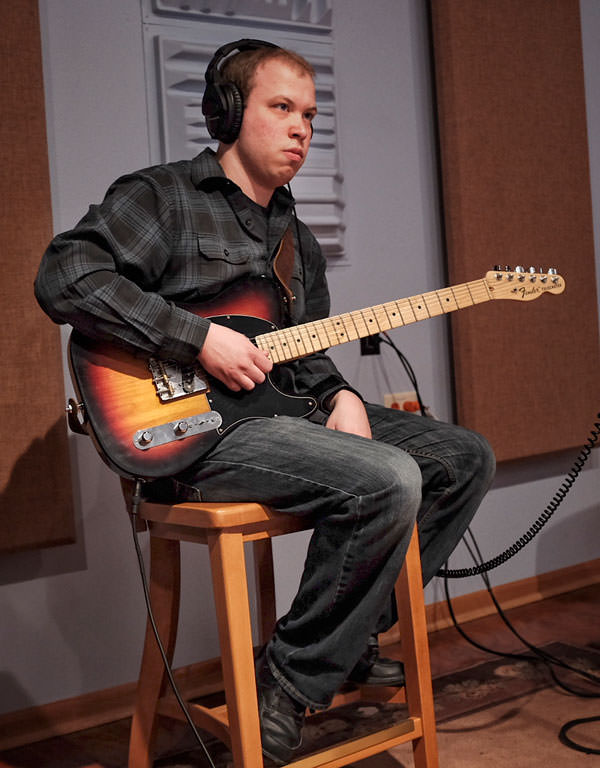 “I’m really glad Roots Music Club is the name we decided on because some of the other ones I considered were ‘acoustic music club’ and ‘folk music club’ and that would have been more limiting,” Bryce said. “At this point now, we explore so many different kinds of music.”

In addition to getting together and playing music on Tuesday nights, sometimes the club will host local or regional singer-songwriters. Also, there are theme nights where a certain type of music is the focus for the evening.

“We’ve had people from all over come in and play and almost give little clinics,” Bryce said. “They’ll talk about songwriting or performing and we do that whenever we can. Other times we’ll have members perform, open-mic type nights. We’ve had country nights and we’ve had a Beatles night and a Bob Dylan night, complete with a Bob Dylan impersonation contest. That was a lot of fun.”

The club has performed both on and off campus, including events at the Bowen-Thompson Student Union, such as the St. Baldrick’s Foundation fundraiser, the BGSU Dance Marathon at the Student Recreation Center and an album release party at Grounds for Thought in downtown Bowling Green.

The album is the club’s main project.

“It’s only been two years, but it looks like people want the main project every year to be recording an album, a full-length CD,” Bryce said.

The club only raised enough money the first year to have the CD itself manufactured professionally. To finish the project, some students did the artwork for the album cover and the club members mastered the audio.

“We ordered a bunch of copies of the CD and sold them, raising a bunch of money for the club,” Bryce said. “We had 27 people on the CD last year and it was such a great experience that everybody wanted to do it again.”

The club continued to grow in size, so Bryce had bigger plans for the second album. 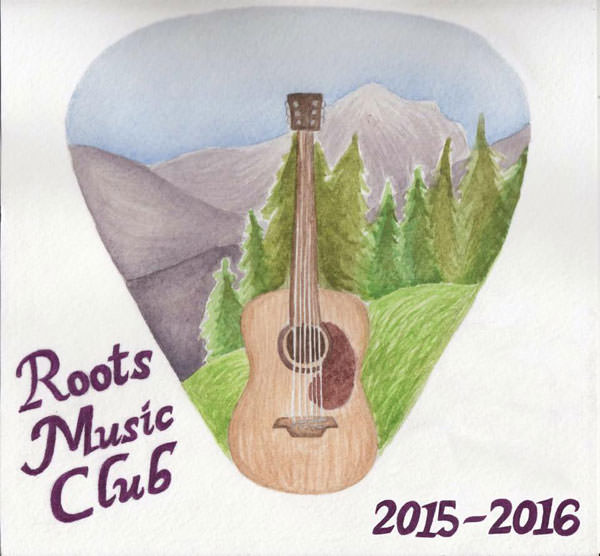 “We decided to see what we could do to really make it professional,” said Bryce, the club’s president. “We got some funding from the University’s student budget committee and we also raised more money with a crowdfunding campaign. On Kickstarter, we were able to raise enough funds to record the CD in a professional studio in the spring.”

Bryce produced the album, “2015-2016,” at Stone Soup Recording Studios in Maumee, Ohio. Students designed the artwork for the album, which boasts 17 songs and 37 BGSU students playing on the recording.

The CD, which can be purchased for $10, covers many genres and doesn’t rely on any one style or theme, which was by design.

“That’s one of the things that I’m most proud of,” Bryce said. “It’s all over the place in the best way. There’s definitely some roots music with some solo acoustic guitar and singer-songwriter mixed in with some rock and country as a well as a jazz funk tune. I don’t even know how to describe some of it — there’s just all different kinds of styles of music.”

There’s also quite a range of musical talent displayed on the album, from beginner to master.

“There’s some amazing talent at BGSU that otherwise people might not hear about,” Bryce said. “We meet at the music school and I’m a music major, but the majority of the members are not music majors. I think it’s really cool that a lot of the club members might not have been involved in music formally or the music school because they just might play the guitar or banjo or sing on their own, but they didn’t have an outlet because there wasn’t anything like this before. The club just gave them the opportunity to do what they do amazingly well.”

Bryce, who performs in Bowling Green and Toledo, is confident that the club will continue to grow now even though he’ll no longer be at the helm.

“I am very proud of what we've created here,” he said. “My favorite thing about the Roots Music Club has been the relationships it has built. Numerous friendships and bands have emerged from the RMC between people who may not have met each other if not for the club.”

CDs are available for purchase at Grounds for Thought. For more information about the CD or the club, email rootsmusic@bgsu.edu.