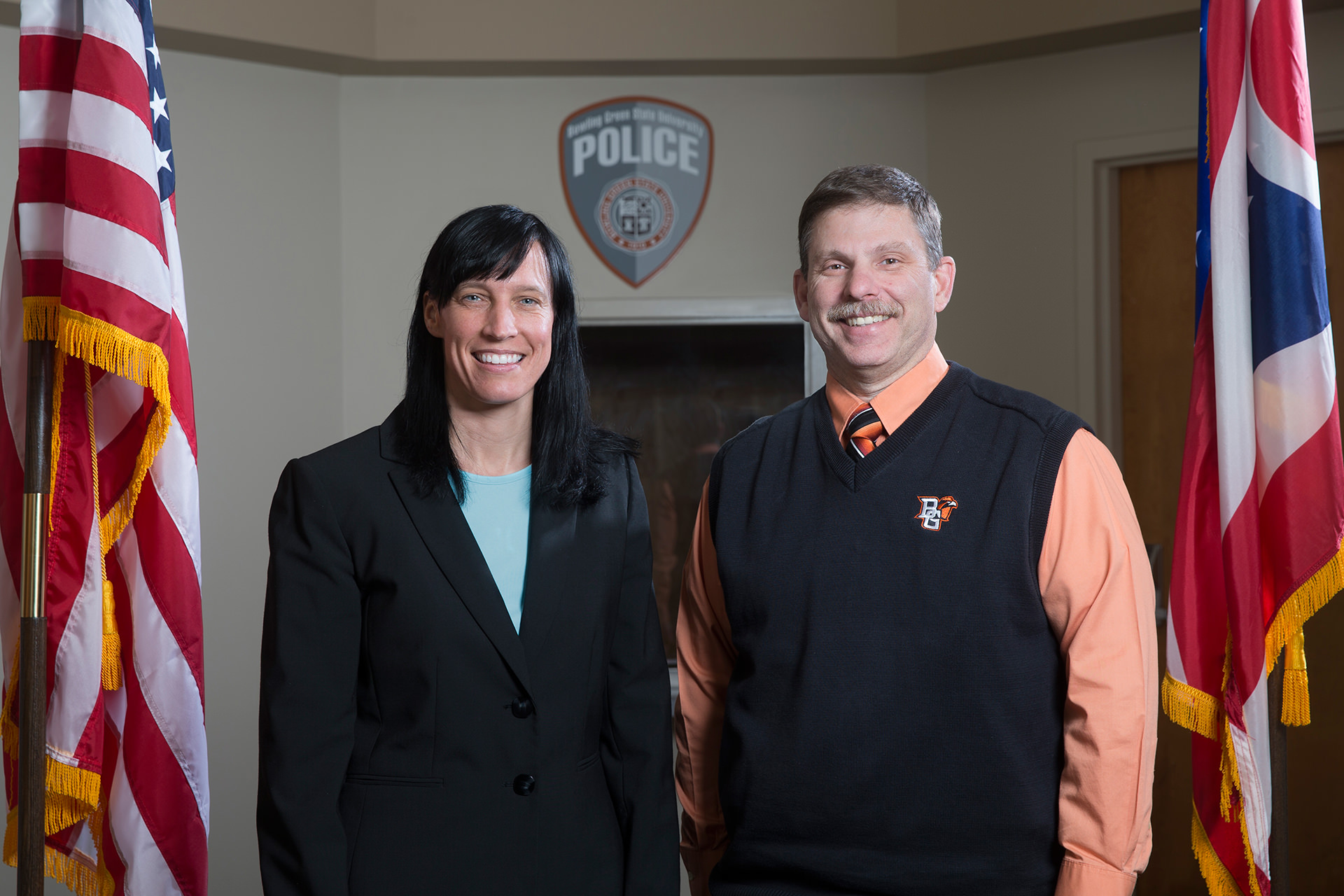 In hot pursuit of education

And Police Captain Tim James and Chief Monica Moll have been just as diligent in the classroom.

James graduated from Bowling Green State University with a Bachelor of Science degree in criminal justice from the College of Health and Human Services on May 6. Moll earned her doctoral degree in political science from Kent State University on May 13.

For James, who just celebrated 30 years working for the BGSU Police Department, obtaining his bachelor’s degree has been a long time coming.

“I actually started back at BGSU in 1987 and then in 1988 my wife, Ann, and I started having kids and fatherhood became a bigger priority,” James said.

James said he took “24 years off” from school, and in the meantime, while working for the police department, he was promoted to captain. That’s when Moll and other administrators suggested it might be a good time to finish his degree.

James’ sons, Jake (Visual Communication Technology) and Josh ’14 (Liberal Studies), both attended BGSU and his daughter, Jessie, has been accepted to the College of Music and will start in the fall. Josh also is joining BGSU’s Information Technology Services team as a full-time employee later this month.

“The timing was just right,” the captain said. “The boys were basically on their own and my daughter is really on her own because she’s a very independent person. At their urging, I started back up and it’s been a grind.”

James said the department and the University were very helpful while he pursued his degree.

“With Tim going for his bachelor’s degree, he really didn’t have the option” of work-friendly classes, Moll said. “So working it around his other appointments and schedules when there are nights he has to stay really late in the office because he’s going for class, to me that degree was far harder to achieve and something he should really celebrate because it’s not easy to get that.”

Some classes James could have taken blindfolded while others turned out to be especially helpful in the field.

“Some of the classes I felt like I could have taught because of my experience, but I took clinical psychology, which isn’t really a criminal justice class, and I found it really interesting and beneficial to what we do here a lot of times with our CIT (crisis intervention team) calls,” James said.

Overall, James is glad he put in the work to get his degree.

“It will definitely help me in the department with different things that we do and it adds credibility,” he said. “Whenever I decide to retire — I’m still chronologically young though I don’t know about my body sometimes — I may decide to look for a chief’s job or an administrator’s job and it’ll definitely bolster the resume.”

The chief also got a chance to finish what she started.

Moll got an associate degree in criminal justice and a bachelor’s degree in social work from the University of Akron and a master’s degree in public administration from Kent State University.

“Before I came here, I worked for Kent State University’s police department for 14 years,” Moll said. “I was hired there when I was 21, so I was almost done with my bachelor’s, but not quite. And similar to Tim here, my superiors at Kent State encouraged me to finish that bachelor’s degree.”

Kent State faculty again encouraged her to get her doctorate in political science, a public policy Ph.D. program.

“When I finished all the coursework for the Ph.D. and took the comprehensive exams it wasn’t too long after that that I got hired at BGSU,” Moll said. “Then I had to write my dissertation and my first few years here there was zero time to do that.”

Moll took a couple vacations days per month during the past two years so she could have time to write her dissertation on police ethics training in police academies, which she defended in March.

Now that she has obtained her doctorate, she might consider heading back to the classroom again — this time as a teacher. As an adjunct professor, she taught a course in policing at Kent State and spent time as an instructor at police academies in northeast Ohio.

“Now that I’ve had some time to pause, yes, I would like to get back into teaching,” Moll said. “When I first started here, I thought there’s no way I was ever going to find time to teach an undergraduate course here. But now that things are slowing down a little, I’d like to consider doing it in the future. It’s something I really enjoy.”

James said the criminal justice department couldn’t have been more supportive during his time as a student.

“(Assistant Dean and Director of Advising) Tom Gorman was a godsend when it came to picking classes, advising me on which classes to take and when they were going to be offered,” James said. “He’s really been instrumental in helping me get it done as quickly and with the least amount of pain possible.”

Moll there were other perks to having James in the classroom.

“It’s also been good from a recruitment perspective to have him in the criminal justice program because he’s interacting with a lot of the students that we’ll recruit to work here,” she said. “And then many of them, when they find out what he does for a living, will ask questions when they know we have an open position. It gives them a point of contact and it’s been a great outreach to the community to have him involved.”