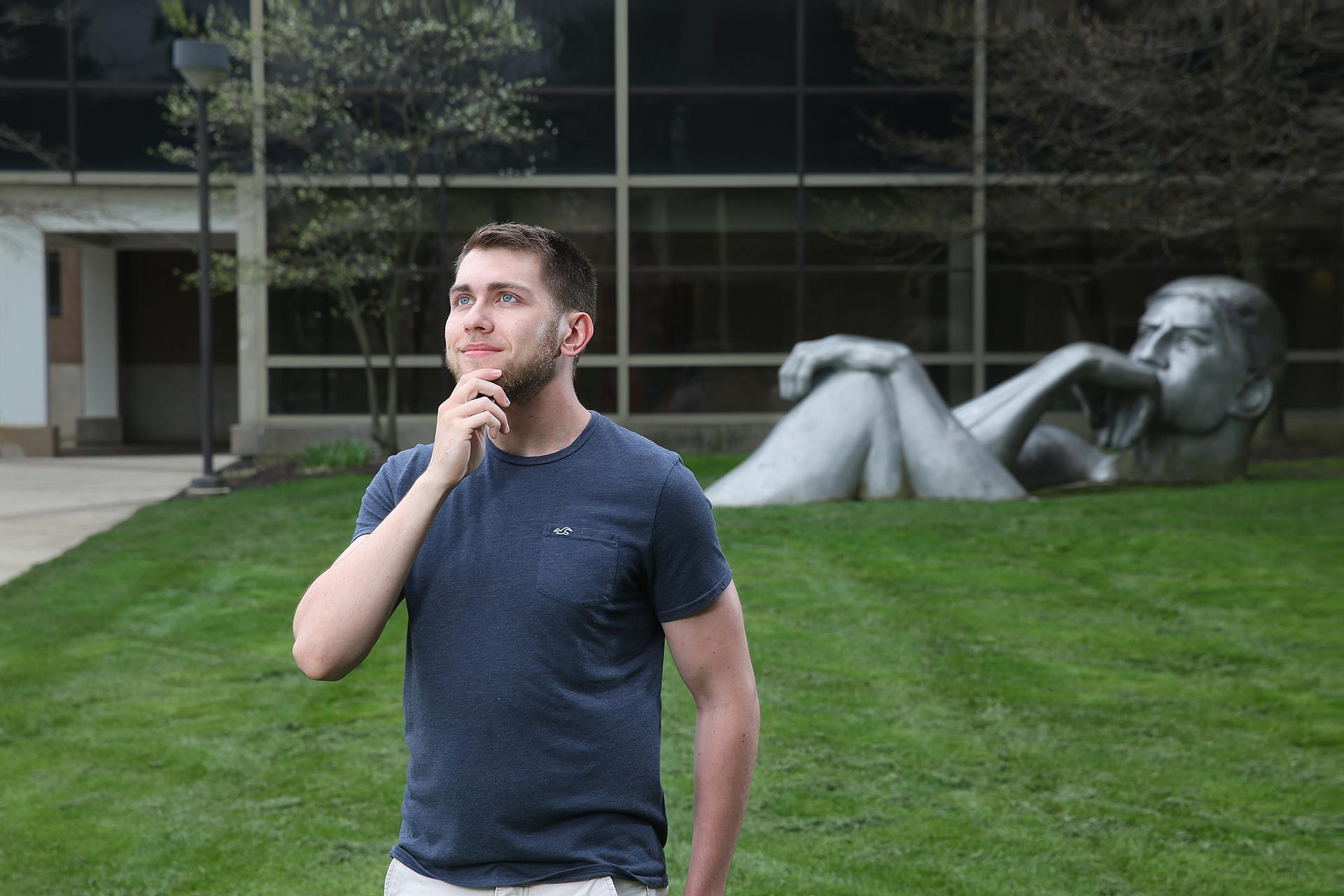 Neuroscience student accepted into med school of his dreams

Jake Pemberton is making the most of his last semester of college. He’s closed his research avenues. He quit his job at Meijer. And he’s handing over his responsibilities as part of Students for Sensible Drug Policy, although he’ll probably still be a part of the organization in the future.

For the first time in four years, he says he’s actually living as a college student.

“I’m still going to class and tutoring, but I’m enjoying this semester,” he said, adding that he’s also ready for what comes next.

Since Pemberton’s first year on campus, he’s been busy, going to class, conducting research, tutoring, working, shadowing a neurosurgeon – and maintaining a 4.0 GPA. That work has paid off as the neuroscience major, and President’s Award winner, will start medical school at the University of Pittsburgh in mid-July.

“The University of Pittsburgh was my reach school, my dream school,” he said. “Getting accepted was the best day of my life.”

Pemberton, who started at BGSU as a psychology major, also considered BGSU a dream school.

“It was the only college I visited,” he said. “I loved everything about the place. I knew it was the school for me.”

Pemberton switched his major to neuroscience because he wanted to get involved with research early. “We don’t know as much about the brain as everything else. It’s the last frontier of the body,” he said. “BGSU is the place to be if you are interested in neuroscience.”

That switch allowed Pemberton to do research all four years he was at BGSU, starting with research focused on movement for a year and a half and switching to theoretical research for the last two and a half years. As part of his research, he contributed to a paper that was presented at a Society of Neuroscience conference in San Diego and presented a poster at BGSU and various conferences.

He credits BGSU for these opportunities and considers his professors friends. This relationship fit with his learning style.

“I learned who I wanted to be here,” he said. “Learning is a lifelong journey. You have to hustle to get what you want and surround yourself with people who will help you get there.”

Pemberton met some of those people in BGSU's Honors College, which he describes as a supportive community with goal-oriented people. As part of that experience, he took Critical Thinking, which he calls the single most important class he ever took.

“It expanded how I think about things,” he said. “That will make me a better scientist.”

Pemberton collected letters of recommendation and studied for the MCAT entrance exam for six months before applying to medical school. His favorite lecturer, Dr. James Pfundstein, wrote one of those letters of recommendation: “Jake is an amazing student and an amazing person. He knows a lot and is always hungry for more. He’ll go far, and someday soon we’ll be saying, ‘I used to know that guy.’”

Pemberton applied to 27 medical schools and wasn’t expecting an interview, much less acceptance, to the University of Pittsburgh. But now that he’s in, he’s ready to get started.

“I want to be the best surgeon I can be, so I have to go to the best school,” he said. “I want to do something revolutionary. I want to make a difference. More than anything, I want to interact with people, fix things right then and there.”

He doesn’t know what to expect from medical school, but he does expect he’ll change his mind about his residency, which currently could either be in orthopedic surgery or emergency medicine. He says it’ll be hard work, but “if the last four years are any indication, I’m up for the challenge.”