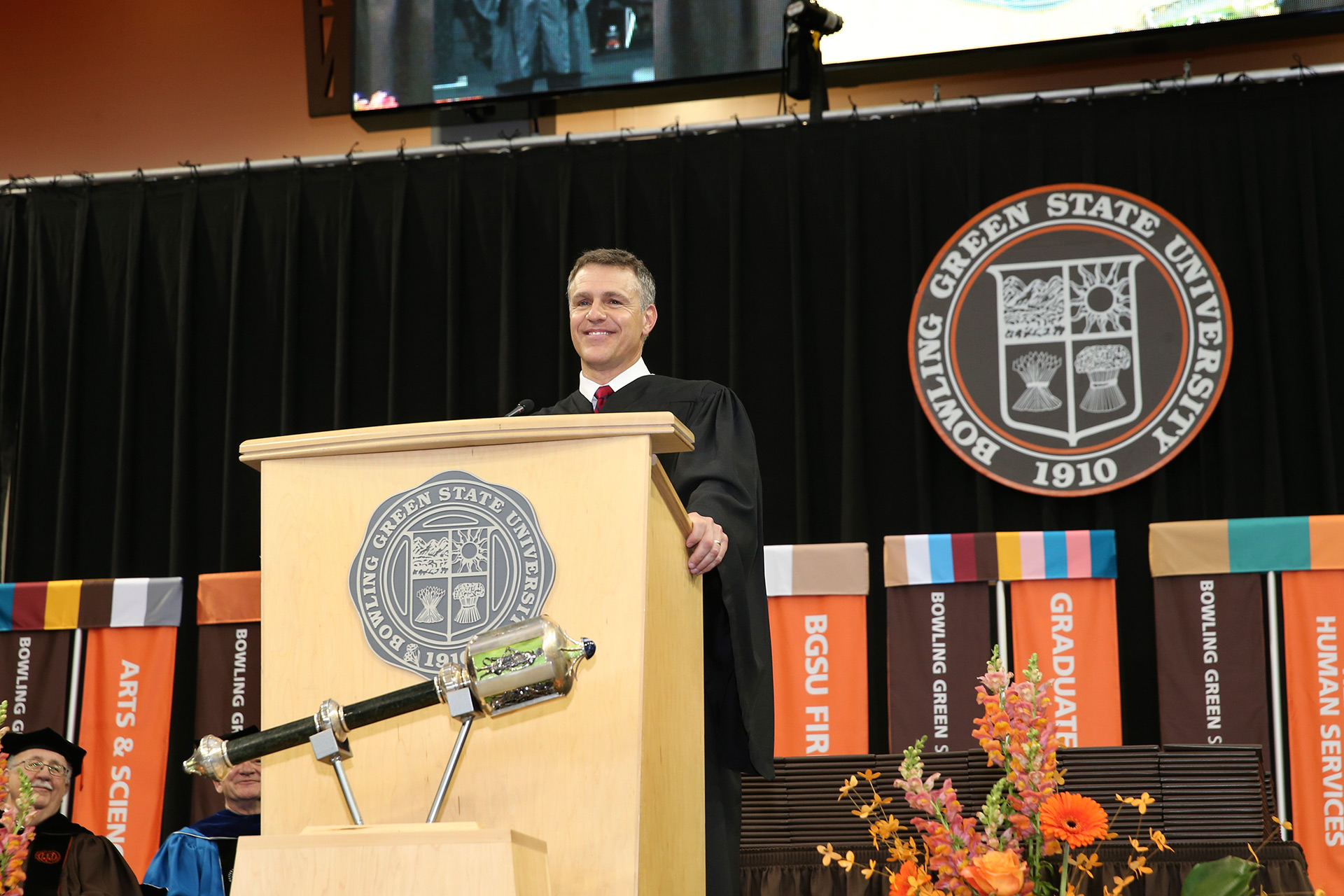 ‘BGSU is a launching pad’

When Jason “Jay” Crawford sat in the sea of graduates in 1987, he took commencement speaker Fred Rogers’ words to heart: respect yourself and respect others.

“He was a television host we all grew up with, and the advice ‘Mister Rogers’ gave us still resonates with me 29 years later,” Crawford said. “It was that nugget of advice that I was able to take from my own college commencement and really put it to use.”

Crawford received a Bachelor of Arts in radio, television and film from the University in 1987. He started working at ESPN in 2003, and is the co-host of the network’s flagship show, “SportsCenter,” handling the midday duties. His professional achievements include winning four regional Emmy Awards, the Best Sportscaster Kentucky AP Award and three SPJ Best Sports Program Awards.

Crawford addressed graduates of the Arts and Science colleges during the Saturday morning (May 7) commencement ceremony at the Stroh Center.

“I’ve wildly exceeded the dreams of an 18-year-old freshman when I stood and told my speech class I’m here to learn how to be a television sports anchor,” Crawford told the graduates before concluding his speech with the chorus from the ESPN theme. “My dreams came true, and now it’s your turn. Be naïve enough to chase your dreams, be persistent enough to never stop.

“Like the day you arrived here, go forward in that excitement and even that fear. Let it fuel you as you chase your dreams. Bowling Green is now your runway to life, your launching pad to catching your dreams.”

On Friday (May 6) Crawford toured South Hall, which will reopen in the Fall as the Michael & Sara Kuhlin Center, and he was thoroughly impressed with the state-of-the-art School of Media and Communication. He said the facility rivals ESPN’s studios in Bristol, Conn., and will be a “recruiting magnet.”

“When students ask about colleges, I always push Bowling Green and I will do so even more now,” said Crawford, who met his Falcon Flame wife, Tracy, during his senior year. “I am excited about the future of Bowling Green State University.”

Crawford said he received a “top flight education” at BGSU and his University experience was a springboard to his television career. Being able to start working as a freshman at the school’s radio stations provided invaluable experience he couldn’t have gotten elsewhere, he said.

“Early in my freshman year I was able to host a sports talk show usually once a week and often times twice a week,” Crawford said. “We would take live callers, we would discuss the big sports stories of the day, both locally and nationally. I also had regular shifts within the sportscast or newscasts in the morning, and I also did some DJ shifts too.

“I was just thrilled to get the opportunity to get real working experience. It gave me a laboratory to work on things that I would be able to take into the real world, and that experience was invaluable. Everything was completely student run. I thought, wow, what better experience to put under your belt than actually doing it.”

Crawford, who worked at TV stations in Kentucky, Columbus, Connecticut and Tampa, Fla., before landing at ESPN, said he’s very proud of BGSU, knowing that what made the University special when he was a student still stands true today.

“I think it’s the sense of family and community that goes on here that you don’t see at every institution,” he said. “There are two places in the world that whenever I go it automatically feels right. That’s Sandusky, which is where I’m from, and BGSU. Every time I come back to campus I get the same really good warm feeling. I had such a positive experience during my four years here.”

Crawford’s first sporting event was an Ohio State-Michigan football game when he was 5. He is a noted Ohio State sports fan at ESPN, but he won’t won’t hesitate to pull for his alma mater this fall when the Falcons play the Buckeyes at Ohio Stadium.

“I’m a Buckeye by birth and a Falcon by choice,” Crawford said. “I chose to come to Bowling Green. I could have gone to Ohio State, but I wanted to go to the school that I felt could give me the best education for the best career path I was interested in, and that was Bowling Green.”