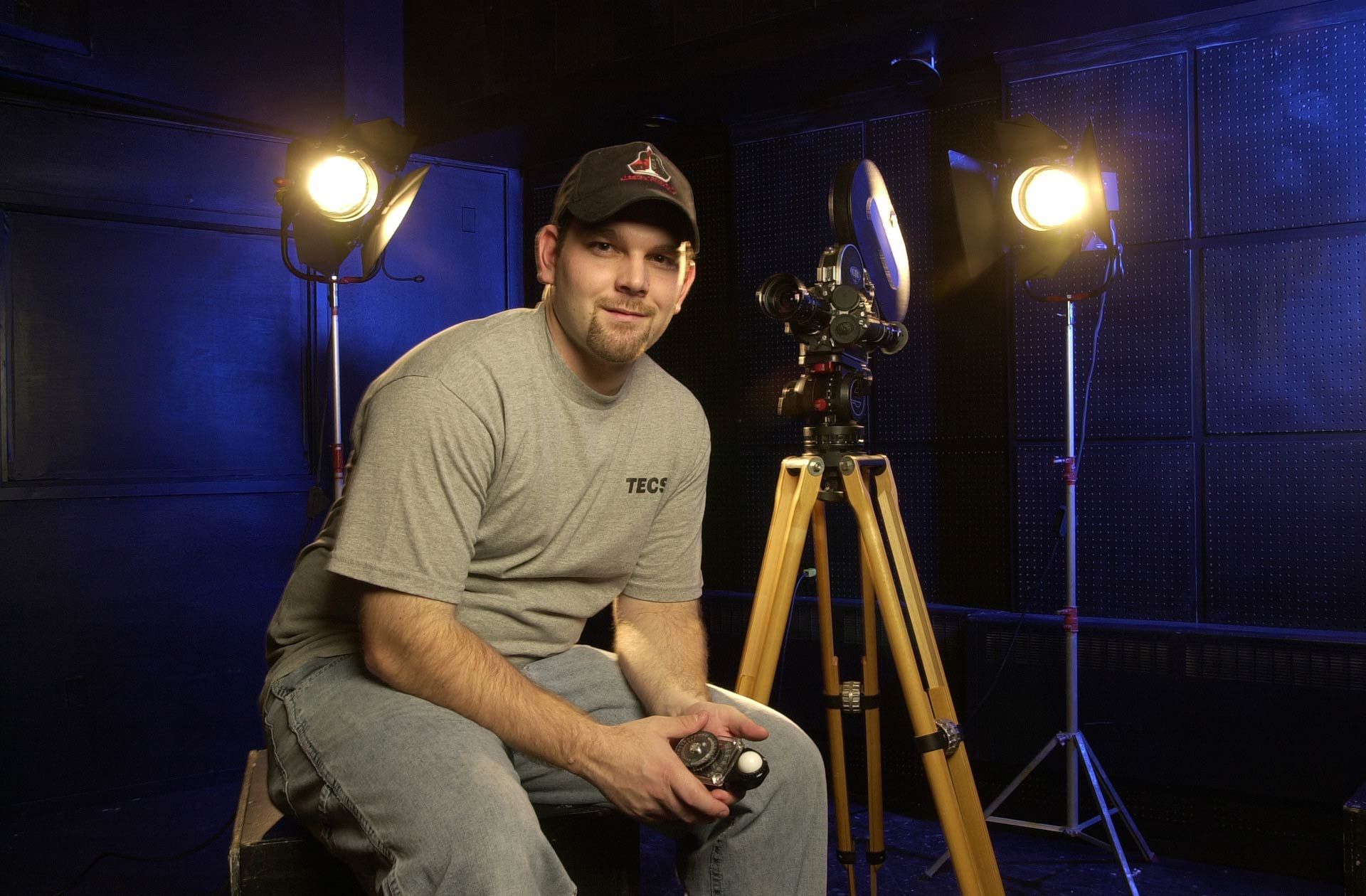 Is there a path from Bowling Green to the studio lots, movie sets and those bright lights of Hollywood?

Apparently so, and it is becoming a well-used track as more Falcons find that their Midwest work ethic, creativity and passion for the art form plays quite well in one of the toughest businesses on the planet.

Jay Ellison left BGSU in 2004 after receiving a bachelor’s degree in art with an emphasis in film production. Today he is president of Shadowcast Pictures, a production company and camera rental operation based in the San Fernando Valley of Los Angeles.

Ellison helped start the operation with a commitment to its “Create What You Imagine” motto and an enduring ambition to tell stories through movies. The initial spark came while he was making a short film as an Ohio high school senior in Medina, Ohio.

“I cringe watching it now, but we were inspired by our favorite movies, so it was an action thing, just me and a buddy running around with fake guns,” Ellison said. “But the teachers were shocked by what we were able to do, and all of the kids got to miss class and come watch our film. All of a sudden, these dorky kids were rock stars, so I decided this is what I wanted to do for my career.”

Bowling Green State University was the only college that Ellison applied to, and a place where his family had a long historical connection, including his grandmother attending BGSU. The University did not have a film production major at the time, and Ellison said the program was more centered on film studies.

“I didn’t want to be a film critic – I wanted to be a director, so I thought about transferring,” Ellison said. “But after some conversations, I found out there were a lot of other people at BGSU who wanted to do the same thing I wanted to do.”

Since the department lacked the cameras, lighting and editing equipment and the stage necessary for film production at the time, Ellison rented a camera to shoot his early film projects and returned home to Medina on weekends to do the editing at his high school.

“Pretty soon film studies partnered with another department and got the funds together to get an editing system,” he said. “Once we got that editing system, we were doing some good projects. By the time I graduated, the University had cameras, lights and the editing systems.”

Ellison and close friends Jon Wagner ’05 and Seann Flynn '05 (who passed away in 2011) were instrumental in kick-starting film production at BGSU. They helped bring a film festival to BGSU and brought in professionals for workshops and screenings – producers, cinematographers, production designers and storyboard artists. And each one of the featured speakers had an Ohio, or a Bowling Green, connection.

For his senior project, Ellison shot a World War II era film in Bowling Green, based on the story of his grandfather’s experiences. Ellison raised funding, got help from the community, and went out and made a movie.

“We dug a ditch, filmed at a house and used a bunch of old ROTC rifles. And we did some stuff that I’m pretty sure we would be in jail for, if we did it today,” he said. “But it was a neat, collaborative thing and everyone in the film program helped out. By this time, the University had really stepped up and figured out that this is what people wanted to do. I think it really got things going.”

A film major was added soon after that, more instructors were hired and film production on campus amped up. And a steady stream of BGSU filmmakers has followed Ellison’s path to Los Angeles, where he got his start by using the contacts he had made while bringing filmmakers to BGSU for workshops on campus. 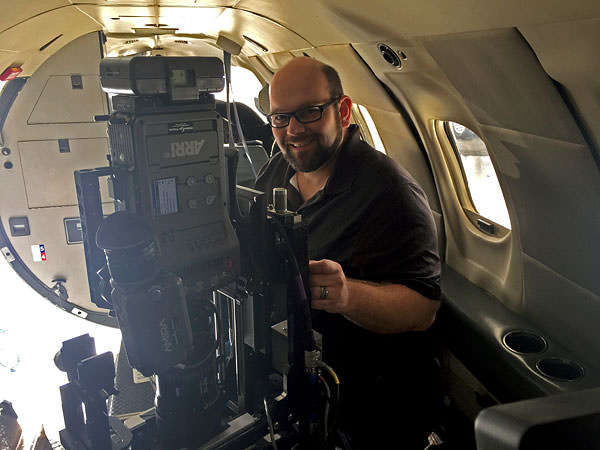 Once out west, Ellison worked as a technician for a camera rental house and found himself on the set of numerous feature films, television shows, pilots, commercials and music videos.

“I was getting deeply immersed in the business,” he said.

He soon started investing in camera equipment and stayed out front on the rapidly changing technology. He wrote a business plan for a company he hoped to start and asked a friend from back in Ohio to invest the seed money to get the operation off the ground in January 2008.

“The company was just me at the time. I didn’t even know my wife yet,” Ellison said. He would meet his future wife Chrissy Steinman, another BGSU graduate, at a concert and, after a four-year friendship, get married. Now Chrissy Ellison, who graduated in May of 2003 with a degree in child and family community services, is vice president at Shadowcast and handles the company’s accounting.

Wagner was an integral part of Shadowcast at the start, but moved back to Ohio to take advantage of tax credits and continues producing films. A 2005 graduate with a major in film studies, Wagner also ran track and cross country at BGSU.

“We all wanted to make movies, but the background we got at Bowling Green was very important – it taught me to appreciate film as an art form,” Wagner said. “There was a great sense of community there, and that’s what you need for filmmaking. We also learned that you don’t have any idea what you don’t know, until you find out.”

Wagner, who rents camera equipment from Shadowcast, made three movies in Ohio last year. He said that when he and Ellison first moved to Los Angeles, they were part of their “own little film community of BG people.”

Flynn was also instrumental in launching Shadowcast. The music performance major, who minored in recording technology, served as the studio’s head of post-production services and focused his work on editing and sound design. Flynn designed sound for a half dozen feature films, as well as commercials, short films and web series. After he was killed in a motorcycle accident in Los Angeles, his friends started the "Seann Flynn Lives Memorial Scholarship" at BGSU in his memory.

Although they originally set up Shadowcast with the intention of directing and producing films, Ellison said that direction has changed. 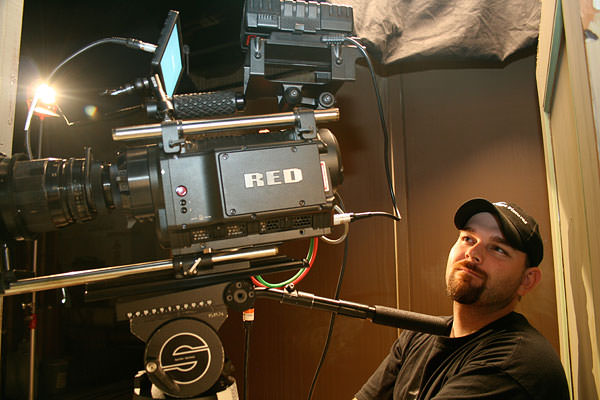 “Looking back, it’s kind of crazy. We’ve gone from just me working out of the loft of my apartment, to having our own facility and doing full service for large projects and productions,” Ellison said. “We’ve kind of morphed out of production, and we are basically a camera rental house that is competing with the major rental houses.”

Ryan Malehorn ’12, another BGSU film production major, is the rental manager for Shadowcast and is responsible for the company’s inventory of 20 camera bodies, as well as all of the lenses and accessories. He eventually wants to work on-set, and said Bowling Green gave him a solid foundation to get started in making movies.

“I got the basics at BGSU, but a lot of this is drive – you have to want to be out here to make it work,” Malehorn said. “L.A. is a crazy place, but the big thing is there is a pretty decent network of film majors that have come out from BGSU and are already here.”

“Jay understands the industry really well, and he also understands the BGSU film community. After working for him, I have less trepidation about making a full-time move out there,” Extine said. “A lot of the work that I’ve done here at Bowling Green made me confident in my skills and abilities, but I wasn’t really certain until I went out there and saw that what they are doing on the large movie sets is not that different from what we are doing right here at BGSU.”

Extine got to work on several shoots and made contacts he hopes will help him land work following graduation.

“I found out I knew more than I thought. I was surprised that I was able to be competent in that kind of setting, and as a film student, that is a huge confidence booster for me,” he said.