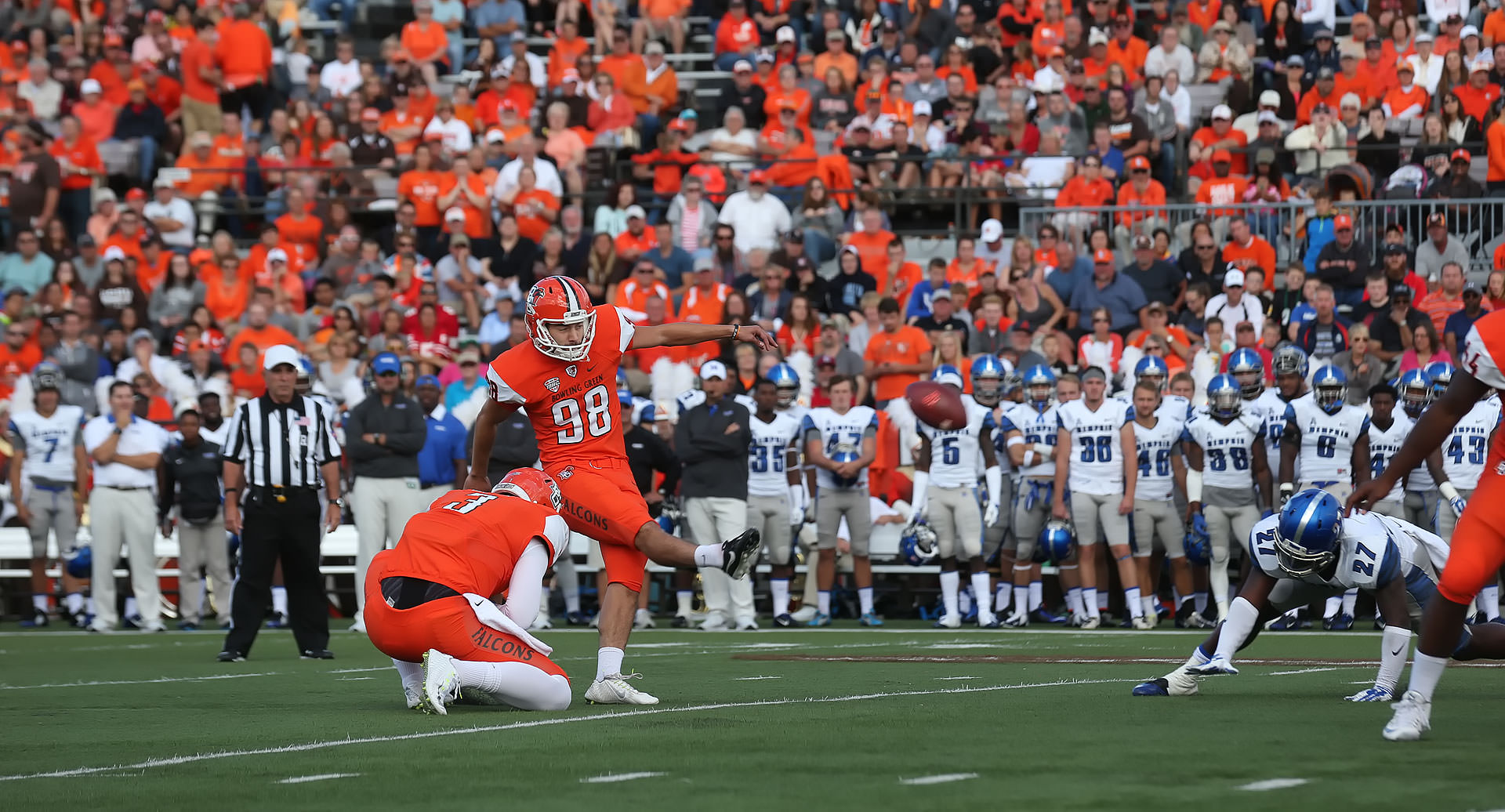 All the right moves

Growing up in Lithopolis, Ohio, Tyler Tate learned to kick field goals on a football field that was once taken over by a herd of cows.

Upon graduation, the Bloom Carroll High School alumnus had his choice between Bowling Green State University and Yale. As a dual threat in academics and athletics, he was well on his way to accomplishing his dream of playing football in college and getting a top-notch education.

Tate said he wanted to stay close to his Columbus-area home and BGSU was a logical choice for the future medical school student.

"My coach did a nice job of selling me on BGSU," said Tate, who also mentioned Van Wright as a factor in becoming a Falcon. "He told me I would do well in school no matter which school I chose and I believed him. I made the decision to attend BG and I don't regret it. Two MAC championships, three MAC east championships and four bowl games later, I still think I made a pretty good choice."

Tate isn't just a standout on the football field, he graduates with a 3.9 grade-point average in exercise science in the College of Education and Human Development and an invitation to attend Ohio State University’s Medical School in the fall.

Even though Tate excelled academically, his first semester at BGSU was tough and he struggled to find a balance.

"The first year was really tough," Tate said. "I woke up at 5:30 a.m. every morning to get to the training room before practice, then I would head to class from 12:30 to 9 p.m. on some nights. Luckily, I had eight mandatory hours of study tables each week and that helped me keep my grades up."

Tate eventually learned how to manage his time and college life became a lot easier after that first semester. He even earned a good enough grades to get out of study tables after his first semester.

However, he still wasn't clear on a major. Tate enrolled in the University as an engineering major but changed his major to applied health science during his SOAR orientation. Then, after a guest lecture by Dr. Matt Laurent, he decided to change his major once more to exercise science.

"After Dr. Laurent came to our class, I set up an appointment to talk to him about switching majors," Tate said. "Physiology sounded interesting to me and provided back-up options in case medical school didn't work out. I could see myself pursing a doctorate and becoming a professor."

After a couple of weeks watching team trainers and doctors working with the athletes, he knew medicine was what he wanted to pursue.

"I was able to complete my practicum and internships at doctors’ offices, which was nice,” Tate said of his experience at Wood County Hospital. “These experiences confirmed to me that medicine was what I wanted to do. Being able to shadow doctors with great bed-side manner like Drs. (Jeffrey) Noftz and (Carlos) Gomez, ask questions and watch them interact with patients was a really great experience."

Although school came easy for Tate, preparing to apply for medical school was a grueling process.

"The entire application process took about a year, with six months of studying to prepare for the MCAT," he said. "I was blessed to make it to the interview stage at my top two choices, Ohio State and Toledo. Both interviews were extremely different but I was able to meet former BGSU students that are current medical students at both universities."

In the end, Tate chose Ohio State. Out of 46,000 applicants, he is in the three percent of students who are accepted to the medical school.

There was one bright spot in the application process – Tate found out he was a member of a Native American tribe.

"While I was in the middle of the application process I discovered my family had roots to a Native American tribe," he said. "My aunt was able to trace our lineage to the Tutelo Nahussan tribe. I filed my paper work with the tribe, which went to review before a tribal council and it was approved. The tribe members even came to Bowling Green and told me about the history of the tribe."

Tate had numerous great moments at BGSU, but his No. 1 memory is the day he met his future wife, Victoria Scott.

"A friend and I were doing laundry in Centennial Hall our freshman year when we saw her," he said. "My friend called 'dibs,' but I didn't listen. I started making small talk with her and she told me she disliked football players. So, things weren't looking good for me, but later I went to her room, which happened to be four doors down from mine, knocked on the door and asked for her number. We went out and dated our entire four years."

The Falcon Flames got married Jan. 16 in Bowling Green amidst a sea of orange and brown. Freddie and Frieda Falcon were even included in the ceremony as the ring bearer and flower girl.

"I really enjoyed my BGSU experience," Tate said. "I met so many great people and lifelong friends — I mean, it's where I met my wife. We are excited to move to Columbus to start the next chapter of our lives but BG will always be special to us. For me, it was a perfect balance of athletics and academics in a great town."