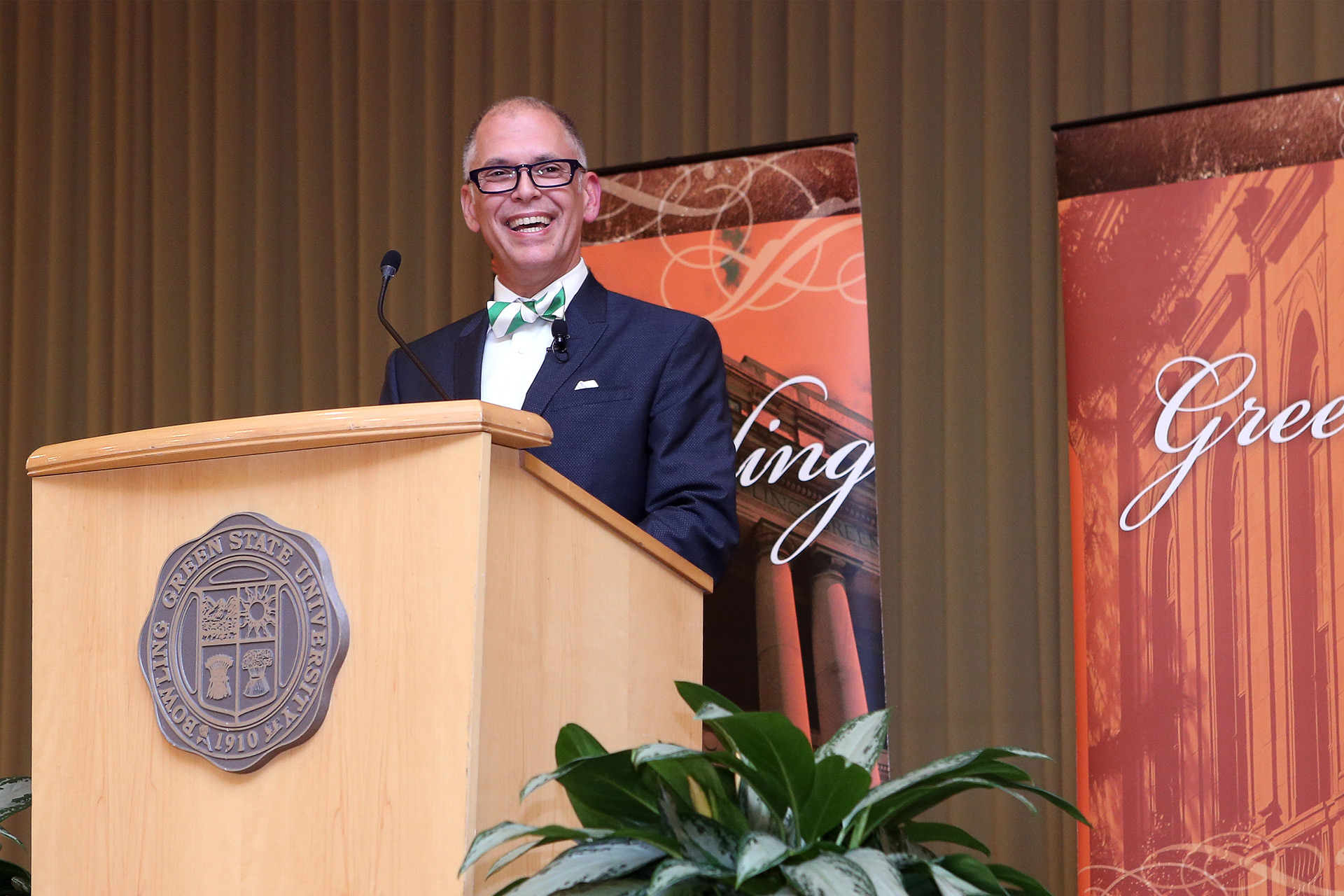 How Jim Obergefell became the face of marriage equality

What do I stand for? What’s important to me? What am I willing to fight for? For most of his life, Jim Obergefell never considered those questions. This “accidental” activist discovered the answers when he became the face of marriage equality in America. They were simple—love, marriage and honor.

Obergefell, who briefly attended Bowling Green State University from 1992-93, was back on campus Oct. 7 to tell his story to around 600 people gathered in the Lenhart Grand Ballroom of the Bowen-Thompson Student Union. Obergefell’s case—Obergefell v. Hodges—was the main case cited in the Supreme Court decision that recognized same-sex marriages.

BGSU Trustee Steve Daley met Obergefell at an event in Columbus and then looked him up on Facebook. It was there that Dailey discovered that Obergefell had attended BGSU. Daley sent him a “friend request,” which Obergefell accepted.

“I told Jim we needed to get him back to BGSU after the decision was announced over the summer. Jim is an ordinary guy who performed an extraordinary act,” Daley said in his introduction. “The Supreme Court decision will enter the history books in the chapter on landmark court cases.”

While his time at BGSU was brief, it was a seminal point in Obergefell’s life. One night, a fellow student asked him point blank if he was gay or straight. It was a question Obergefell had never answered honestly until that night.

“I said, ‘Gay,’ and I immediately felt a weight lift from my shoulders,” Obergefell explained. “I found myself in an environment that celebrated differences and where I could accept who I am, a gay man.”

During a visit back home to Cincinnati, he met his future husband, John Arthur. In May of 1993, he left BGSU to move back home and in with Arthur. 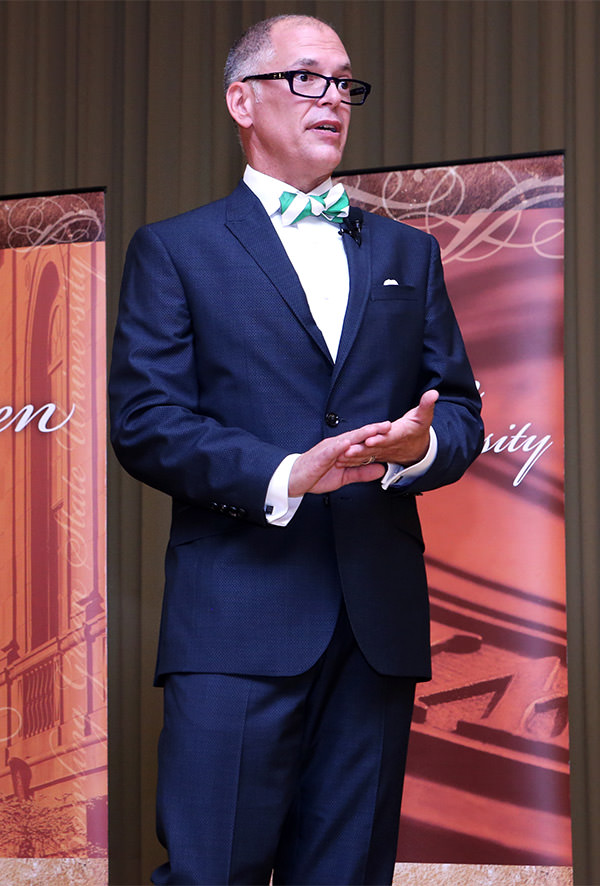 We realized we were willing to fight for love, each other and our marriage. We didn’t realize we were fighting for others across the country.

“John and I built a life together in Cincinnati. We worked together and built a home together. We were fortunate—our families welcomed us. We were committed to each other, but we couldn’t make it legal and public by getting married. We wanted it to carry legal weight and didn’t think it would happen in our lifetime.”

In the spring of 2011 their lives were shattered when Arthur was diagnosed with ALS, or Lou Gehrig’s disease, which is a terminal diagnosis. Obergefell became his full-time caregiver. In June of 2013, the Supreme Court struck down the Defense of Marriage Act in United States v. Windsor. The federal government now recognized same-sex marriages. Obergefell immediately proposed, but Arthur’s fragile health made traveling to a state that allowed same-sex marriage almost impossible.

Due to Maryland requiring only one person to be in attendance to apply for a marriage license, the couple chose that state to say their vows. However, in order to get Arthur there, a medical charter plane would be necessary. Friends and family covered the $13,000 cost, and after a short flight they said their vows on the tarmac and flew home.

“We got to say ‘I thee wed’ and have it carry legal weight,” said Obergefell. “It was the happiest moment of our life and we felt complete. That’s all we wanted, was to get married. We called each other husband about 100 times a day and it felt good. We never thought to sue. We knew at an abstract level that Ohio would not recognize our marriage, but the truth of that hadn’t sunk in yet.”

A visit from a civil rights lawyer put things in perspective. He told them that when Arthur died, his death certificate would say he was single and that Obergefell would not be listed as his spouse. Ohio had a constitutional amendment at that time that did not recognize same-sex marriages.

“We realized we were willing to fight for love, each other and our marriage. We didn’t realize we were fighting for others across the country. We took our stand from a here-and-now point of view. Eight days after our marriage, we filed suit against Ohio and the city of Cincinnati.”

To their surprise, the city’s solicitor showed up in court and told the judge that the couple’s marriage mattered and should be recognized by the state. They won their case. Arthur died three months later.

“But he died knowing his death certificate would be accurate and I know that made him feel comfort.”

Ohio appealed the decision. Obergefell’s case was consolidated with six others from surrounding states and presented to the 6th Circuit Court of Appeals. They lost. The group decided to appeal to the Supreme Court. “We hoped they would step in and settle this matter for once and for all.”

Obergerfell sat in the courtroom in April and listened to his attorneys argue for his rights. In June, he went back to Washington, D.C., and said he was determined to be in the courtroom for every decision day until his case was announced. That day came on Friday, June 26, 2015.

He said there was confusion when Justice Anthony Kennedy started reading the decision—did we win, didn’t we win? When it finally sunk in that they had indeed won, he burst into tears. “John could now rest in peace and know that our lawful marriage and relationship could not be erased by the state we call home.

“Clearly the country was ready. A crushing weight of uncertainty was lifted from me and for millions of others that day.”

What do I stand for? What’s important to me? What am I willing to fight for? Obergefell said his answer now has another component—equality for all Americans. “John and I were not activists, but I discovered an internal activist who is willing to put his life on the line to do what’s right.”

He said in 31 states, including Ohio, exercising your right to marry whom you want can still mean you can lose your job, or your home, and that the time has come for all citizens to receive the same protections under the law.

Obergefell invited everyone in the audience to be a voice “whether it’s for you personally, or someone in a class, or someone on the street. Stand up; speak for someone who is unwilling to speak for themselves. When you hear something wrong or hateful, don’t let it go. Stand up for those who need someone on their side.”