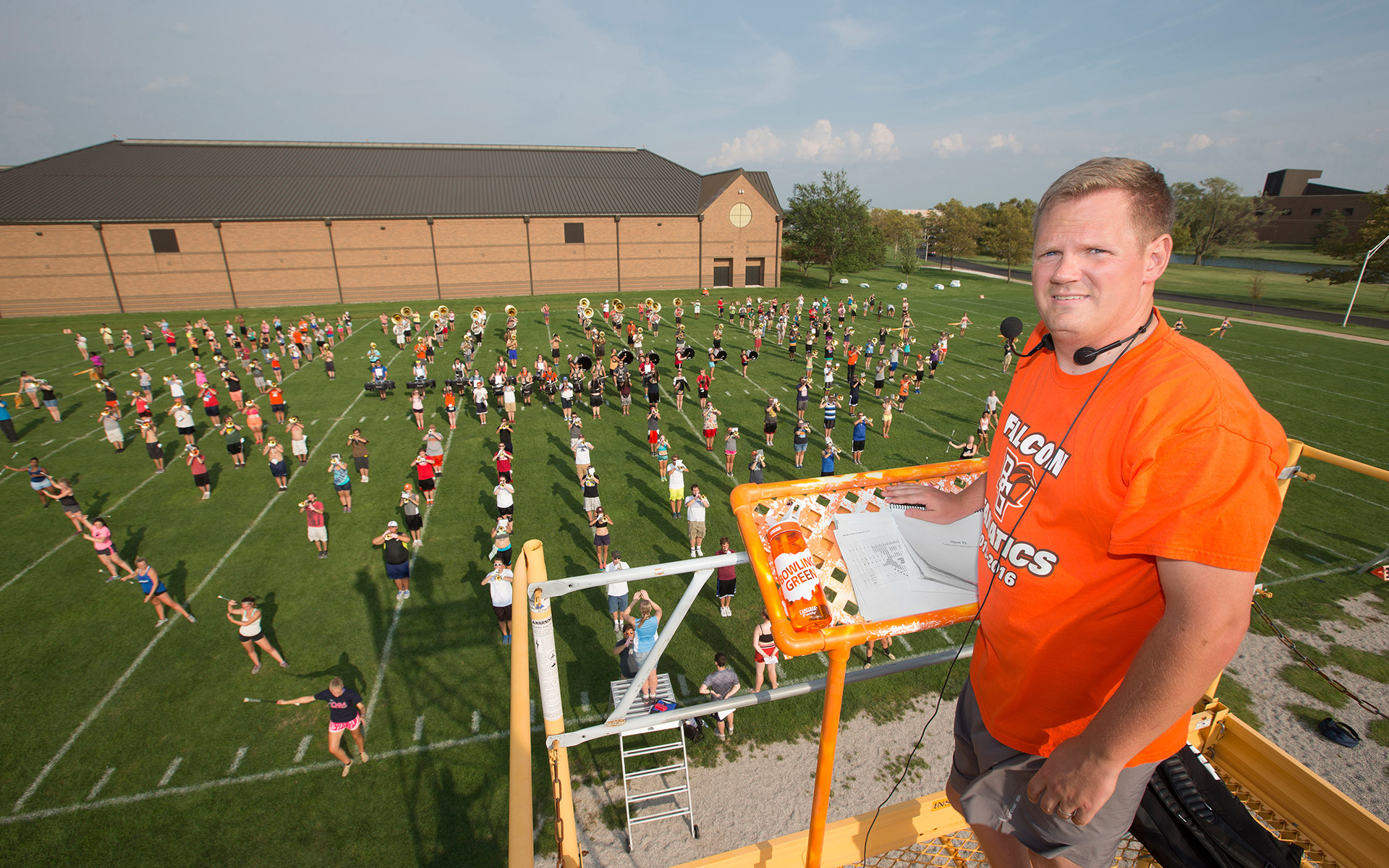 Rockin’ it out with the Falcon Marching Band

FMB under new direction this season

Get ready to rock this season with the Falcon Marching Band! The band is under new direction this year. Dr. Michael King was selected to replace Dr. Carol Hayward, who retired after 12 years at BGSU. King comes to Bowling Green from the University of South Carolina where he received his doctorate of music in June. He considers BGSU the ideal place for him to start his collegiate professional career.

At 259 members, the Falcon Marching Band (FMB) is the largest student organization on campus. King plans to continue the traditions that the band has already established as well as create a few more. One of them includes getting the band more involved in the community.

“I’d like to try and accomplish some things that get this organization more engaged on a regional or national level and be a strong part of the University and city,” he said.

Something King has already implemented is getting the band more involved on social media. His leadership students are helping in that effort, running the FMB’s Facebook, Twitter and Instagram pages.

“We want to use social media to continue to make us more accessible for both fans and prospective students,” King said.

One way he plans to do that is with the halftime show during the Falcons’ Nov. 17 game against the University of Toledo. Since the game is on a Tuesday night, the show will be called #TalonsUp Tuesday. The band will play a selection of Top 40 hits chosen by fans who will vote through social media.

From students to alumni to the average football fan, pleasing the wide audience that attends the football games is one of King’s goals.

“There are so many people who come to the games who have an interest in what we do, and our job is to make it a much more positive atmosphere for everyone who comes,” he said.

Throughout the season, fans will notice that the Falcon Marching Band’s halftime shows will have something for everyone. King has a list of songs across all genres that will be familiar to audiences.

“We will have a little bit of everything to make sure that everybody who’s in the audience can attach themselves to what we do in some way or other,” he said.

There are five home football games this season. The first halftime show, on Sept. 19, will be called “Frieda and Freddie Funk It Up.”

“I’d like to get the spirit squads involved, more than they have been in the past. Hopefully we’ll get them out there with us and do a dance of sorts,” King said.

King is looking forward to seeing how the athletic band evolves. This year marks one of its largest freshman classes.

“It’s a big band but young band, and it’ll be fun to see how they develop as people and together as part of the organization,” he said.

He’s also excited about getting the band more involved on campus and its collaboration with the community.

“Fans love the band, the alumni love the band and the students love the band. It’ll be interesting to see how those relationships work and what types of things we get involved in,” he said. “I think the presence of the band will be even greater than in the past.”