Call of the Wild

Maybe 20 years from now, when they are both successful filmmakers, Justin Grubb ’14 and Alex   Goetz ’13 will be able to look back and recount those two minutes and 30 seconds that did, indeed, change their lives.

The two recent BGSU graduates collaborated on a short film and entered it in the “Wild to Inspire” National Geographic filmmaking competition. Their production, entitled “To the Explorers,” was all of two minutes and 30 seconds long.

The contest attracted hundreds of entries, and the two were was a bit surprised when they were invited to attend the Sun Valley Film Festival in Idaho, where the final judging would take place. Their surprise morphed into shock when they were announced as the winners, and as such the recipients of an expedition with National Geographic to Africa in fall 2016 to film wildlife seen nowhere else on the planet.

“After we entered the contest but didn’t hear anything for a long time, we just assumed the worst,” said Goetz, a film production graduate who minored in environmental science. “Then when I got the email and found out we were a finalist – that definitely wasn’t what we expected to hear.”

The contest drew more than 350 short film submissions, and the Bowling Green duo were the creators of one of just four films selected for this year’s finals.

Goetz and Grubb, who had entered the competition the previous year and made the finals but did not win, had initially planned to sit out this year’s event. It wasn’t until just a week before the deadline to enter that they decided to put something together and see what happened.

“Since we were finalists the year before and didn’t win, we were just grateful for the experience, but we really had no plans to enter again,” Goetz said. “But Justin said we should make something, so we started brainstorming.”

Clockwise from the left: Goetz films white-faced capuchin monkies at a rehabilitation center in Honduras. A spider monkey sitting in a tree in the jungles of Costa Rica. Photo taken while on the Givens Memorial Fellowship-funded trip. Grubb jumps into the Honduras coral reef to film the reef’s night life.

Grubb, a 2014 graduate with a degree in marine biology, said they decided to base their film on the people who work tirelessly in harsh conditions in order to help protect threatened species.
“There are lots of films on animals, so we wanted the focus to also be on the people that are really saving these animals, and we also wanted to encourage other people to go experience our planet,” Grubb said. “And we had a week to do it.”

Goetz said that taking part in the competition the previous year had given the BGSU filmmakers a snapshot of just what the judges might be looking for in the short films.

“We thought they would be looking for something inspirational, so our goal was to just try and inspire people to care about nature,” he said. 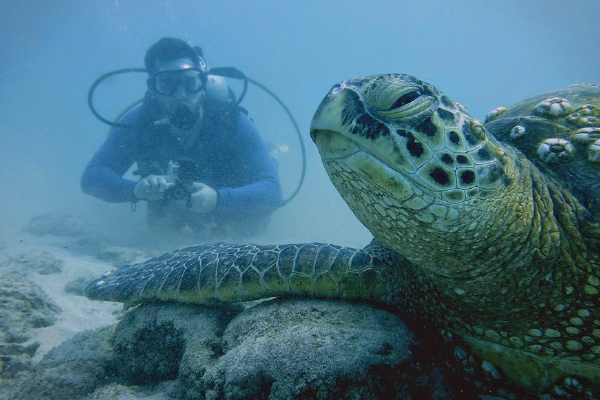 Their frantic filmmaking window got even tighter when Goetz’s laptop crashed, so he borrowed one and they went to work. It was five intense days of nothing but reviewing clips of filming from previous projects, editing and working on the voice-overs.

“We put something together, but I don’t think we were too confident about making it in the finals,” Grubb said.

The pair, who both work at the Toledo Zoo, traveled to Idaho, with all expenses paid by National Geographic, and watched as their film was screened in front of the judges. They then had to sweat it out until they were announced as the winners two days later.

The winning film is a montage from previous collaborations between the two Ohio natives, who initially connected as BGSU undergraduates on a spring break trip that had them both filming wildlife in Florida. They both worked at WBGU-TV and had their own projects, but their big break came when they won a Stuart R. Givens Memorial Fellowship that funded a trip for them to Costa Rica to film wildlife.

The fellowship, initiated by colleagues of the late Dr. Givens to honor his passion for student learning, recognizes resourcefulness, imagination and significant ability among BGSU undergraduate students by supporting self-designed, off-campus experiences that enable them to pursue a passionate interest in a manner not otherwise possible through an academic program, regular summer job, enrichment program or organized study abroad program.

“That was our major launching point, because it was the first time they had awarded a Givens to two people,” Goetz said. Soon they were in the jungles of Central America filming wildlife, and their informal production company was launched.

Clockwise from the left: BGSU alumni Danielle Therrien ‘16, Kaelan Bell ‘15 and Justin Grubb ‘14 hold a BGSU flag on one of their dives in Honduras. Grubb and Goetz pose for a video sequence that aired on the Nat Geo Wild channel on Earth Day. Both filmmakers were featured in the episode about the “Wild to Inspire” film competition. A great blue heron pauses to scratch its beak in the early morning Florida sun in Payne’s Prairie. A two-toed sloth hanging in Costa Rica on the beach of Manuel Antonio. A big horn sheep photographed in Alaska by Goetz.

“The most important part of that experience was that we really learned what it takes to produce a film,” Goetz said. “Before that, we really didn’t have a complete idea of what we were doing.”
While in Costa Rica, they emailed a number of people about their project, and one of the recipients was the executive director of the Toledo Zoo, Jeff Sailer. When the pair returned, Sailer hired them to produce videos for the zoo.

Their winning short film included footage from programs they covered with the zoo and from the duo’s own expeditions. The Toledo Zoo assisted in the production of the film. Lucas Stall ’15, a marketing specialist at the time for the zoo, wrote the script; Grubb provided the narration; and spider monkeys, Tasmanian devils, sea turtles and kangaroos played supporting roles.

Goetz and Grubb will share their experiences in Africa across a variety of National Geographic’s digital platforms, and they plan to extend their trip once the “Nat Geo” portion is completed. They are committed to careers making films about conservation-related topics. 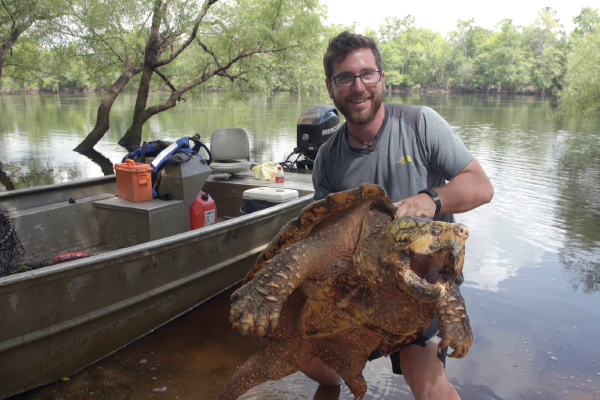 “The easiest and best way to reach a broad audience and to inspire the biggest change in the world is through video,” Grubb said.

Before preparing for their departure to Africa, Grubb and Goetz made a trip to Honduras in June 2016 to film whale sharks. Accompanied by Kaelan Bell ’15, who received a bachelor of science degree in marine biology, they hope the footage of these “gentle giants” will aid in conservation and protection efforts.

Goetz said they could make more money in commercial film work, but their passion is with wildlife.
“This is hard to do, and sometimes we have to carry tons of gear in difficult places, but we are extremely ambitious, and we’ve gotten really good at suffering, too,” he said. “For us, it’s worth it in order to produce awesome videos on wildlife and conservation.”