After traveling thousands of miles to the snowy depths of the world to study two remote Antarctic volcanoes, Dr. Kurt Panter, a professor of geology, and Jenna Reindel, an undergraduate student from Maumee, Ohio, almost returned home empty-handed.

The pair left for the frozen continent on Nov. 26, 2015, for a five-week National Science Foundation-funded research trip. The volcanoes they were traveling to study are located along the upper Scott Glacier and are part of the Transantarctic Mountains, a range that extends over 2,000 miles across the continent and forms the boundary between East and West Antarctica.

“One thing for people to understand is that it’s not unusual for volcanoes to be in Antarctica, including several active ones,” Panter explained. “We know generally what the cause is – it’s the same stretching and rifting that created Kilimanjaro in East Africa. The volcanoes we’re looking at are the farthest south in the world and lie approximately 200 miles from the South Pole. They are isolated from all others in Antarctica and that’s what makes them unusual.”

Panter said one way to better understand the history of the ice sheets is to obtain records from inland ice for past geological periods, particularly in Antarctica, the world’s largest remaining ice sheet.

“Such records are exceedingly rare and can be acquired from these volcanic outcrops,” he said. “The volcanoes now exposed were erupted beneath the east Antarctic ice sheet, and the data collected will record how thick the ice sheet was in the past. In addition, information will be used to determine the thermal conditions at the base of the ice sheet, which impacts ice sheet stability.” 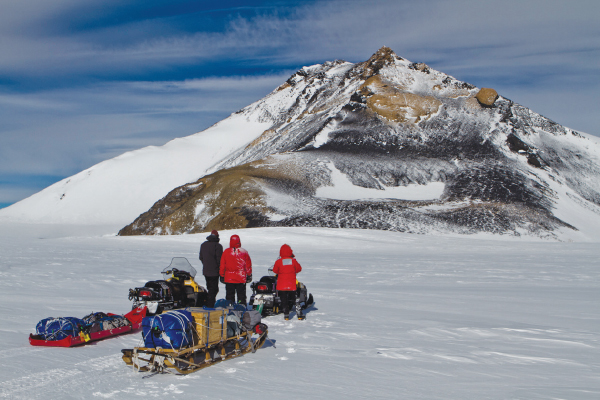 The team’s first travel day away from field camp and first visit to the southernmost volcano in the world, Mount Early. The snowmobiles pulled sleds that contained extra provisions, survival kits and climbing/crevasse rescue gear.

According to Panter, the entire Transantarctic mountain range has the same leaky faults, so why isn’t there volcanism along the entire range? “Despite more than 50 years of research, the fundamental cause of volcanism and rifting in Antarctica is still vigorously debated. The results of this study could also potentially impact the study of oceanic volcanism in the entire southwestern Pacific region, where volcanic fields of similar composition and age have been linked.”

No one has studied these volcanoes since the late 1970s, and for good reason. Panter and Reindel spent a week at the McMurdo Station, the starting point for research expeditions, to gather their gear and take survival-training classes. No piece of gear was overlooked, and each item was tested thoroughly before being set aside for packing.

“It takes lots of organization of all those things to get them to the fixed-wing plane, the plane that takes us to the field,” said Panter. “All of our cargo had to be weighed and measured. It was a week of just prepping, so there was a lot.”

Once prepped and packed, the group took a ski-equipped military transport aircraft (LC-130) loaded with snowmobiles and 28 days of food to Shackleton Glacier Camp, a drop-off point that is still 150 nautical miles from their research site. The camp has been set up as a semi-permanent station to serve science groups radiating from there to other research locations.

“We were traveling the farthest from the camp,” said Panter. “We staged all of our equipment there and got it all staged for transport by a smaller ski-equipped aircraft.”

The team, made up of Panter, Reindel, mountaineer guide Tim Burton, and Dr. John Smellie, a researcher from the United Kingdom, was now ready to go farther inland. Panter and Burton took the first flight to the site to scout for camping locations. A second flight made it out with some camping gear, and then Mother Nature put her foot down.

“We had five flights scheduled to get everything out, but only the two made it,” said Panter.
A storm bringing high winds and whiteout conditions stranded Reindel and Smellie at Shackleton Camp for close to two weeks, leaving Panter and his guide alone at the field campsite and unable to go out into the field.

Although the weather at the research site did clear for several days, Burton felt it wasn’t safe to travel across crevassed glaciers with just two people and one snowmobile. This left Panter and Reindel facing a shrinking window to accomplish their research goals. 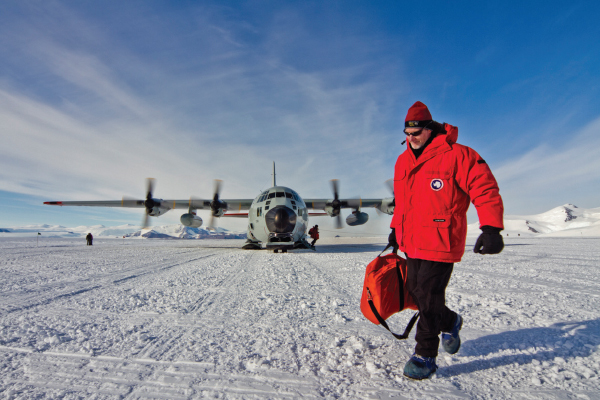 The team was transported by a ski-equipped LC130, operated by the U.S. Coast Guard, approximately 600 miles from McMurdo station to Shackleton Glacier. This was the jumping-off point to the field campsite, which was about 150 miles farther toward the South Pole.

“We always had to be ready every day to leave and waited to see if the weather was good enough to fly,” said Reindel. “You don’t find out until noon that you’re not going, so you go back to bed. I played a lot of Scrabble and even made Christmas cookies.”

Back at the field campsite, Panter and Burton were confined to their 7-foot by 7-foot tent, reading and sleeping. For exercise, they would walk around the campsite as far as the weather allowed.
Panter also had to face a harsh reality – that this entire trip could have to be rescheduled, which would throw off Reindel’s timeline to use the project for her upcoming master’s thesis.

“I was ready to cancel it,” Panter said. “I called the NSF in McMurdo and said, ‘This is the situation. We are running out of time. What is the possibility of coming back next year?’”

The NSF and Panter determined that if the rest of the team could make it to the field site by Dec. 24, there was still a chance to get the work done. On Christmas Eve, the weather cleared and the team was reunited at the research site.

While the personnel made it, not all of their equipment did. The tent for their outdoor toilet had to be left behind. They used the snow to build up a makeshift wall and wind blocker around the toilet seat, which made for a “refreshing” experience, Reindel said. 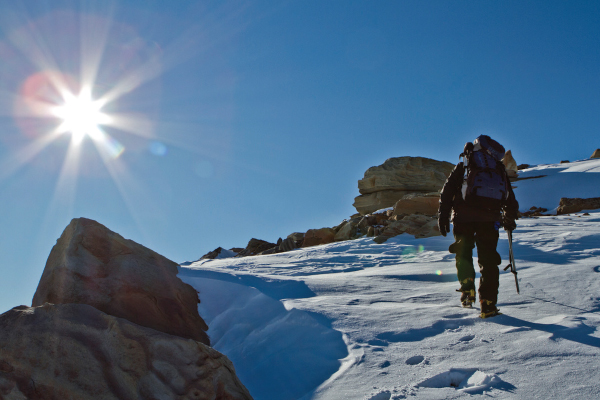 On Christmas Day, December 25, the team finally made it to Mount Early and then to Sheridan Bluff. The weather cooperated and gave them five solid days to gather samples.

“We did extend our time there by one day,” Panter said. “We could have used two or three more, but we did 90 percent of what we wanted to do. The geology we were looking at was more complex at Mount Early but less so at Sheridan Bluff. In the end we pretty much got what we needed.”

Panter said the time at Mount Early was very exciting and “pretty complex.”

“It looks like the volcano that erupted 16 million years ago was interacting with water melted from glaciers. You could tell from the deposits and the pillow lava. You could also tell that it occurred several times as the volcano grew. It’s a complex and exciting story. The time it was interacting with the east Antarctic ice sheet is a period we don’t know a lot about. We think the ice sheet was pretty dynamic, coming and going pretty rapidly according to geological records from other places in Antarctica. I think a lot will come out of what we got from Mount Early in terms of ice sheet history at that time.” 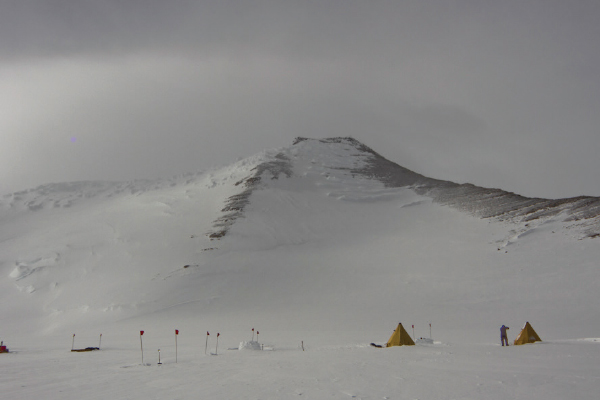 Camp with Mount Weaver in the background. Only mountaineer guide Tim Burton and Dr. Kurt Panter made it to camp as Jenna Reindel and Dr. John Smellie were still at the Shackleton Glacier. Burton and Panter only had one snowmobile, so couldn’t safely travel across crevassed areas on the glacier to get to the volcanoes. They were essentially stuck in their Scott tents – which are about 7 x 7 feet and reasonably spacious for two people and gear, including a Coleman two-burner camp stove – until the weather cleared and Reindel and Smellie could join them with the rest of the gear.

Panter will provide the data to models that use evidence of past glacial activity in Antarctica, in addition to other climate indicators, to look at Earth’s climate over the past 30 million years as well as into the future. These data will adjust the climate model accordingly.

As for the geology, Panter said the fieldwork just required them to gather samples. “Unfortunately, we were hoping for some things that we didn’t see, such as rocks brought up by magmas from the deeper earth.”

When they arrived back at McMurdo, Reindel cut down their samples with a rock saw in order to get ones that could be sent by air to Bowling Green to start her work. The remaining 200 pounds of rock will be sent by boat, and Panter doesn’t expect to see them until April.

The sample processing is expected to run until late summer, and then they will start arranging for the lab analysis. The entire project is supported for two years.

Dr. Kurt Panter (left) and Jenna Reindel (right) next to snowmobiles at field camp preparing for a 10-mile journey across part of the Scott Glacier to first target, Mount Early.

Dr. Kurt Panter (left) and Jenna Reindel (right) next to snowmobiles at field camp preparing for a 10-mile journey across part of the Scott Glacier to first target, Mount Early.

Reindel said she’s looking forward to seeing how the project unravels and “how the mineralogy compares to what we saw in the field.”

But to start, Panter said they have to do “the fundamental work – look at the rocks observationally by hand and use a petrographic microscope before processing them for geochemistry. These things (volcanoes) are really unusual. They are totally away from the other volcanoes in Antarctica –
there’s nothing volcanic-wise between them and McMurdo Sound, which lies 700 miles to the north. Why are they there?

I think that story is pretty exciting.” 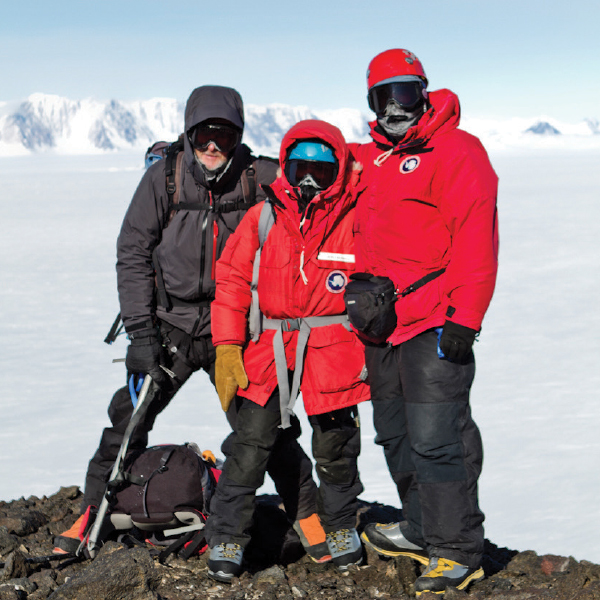