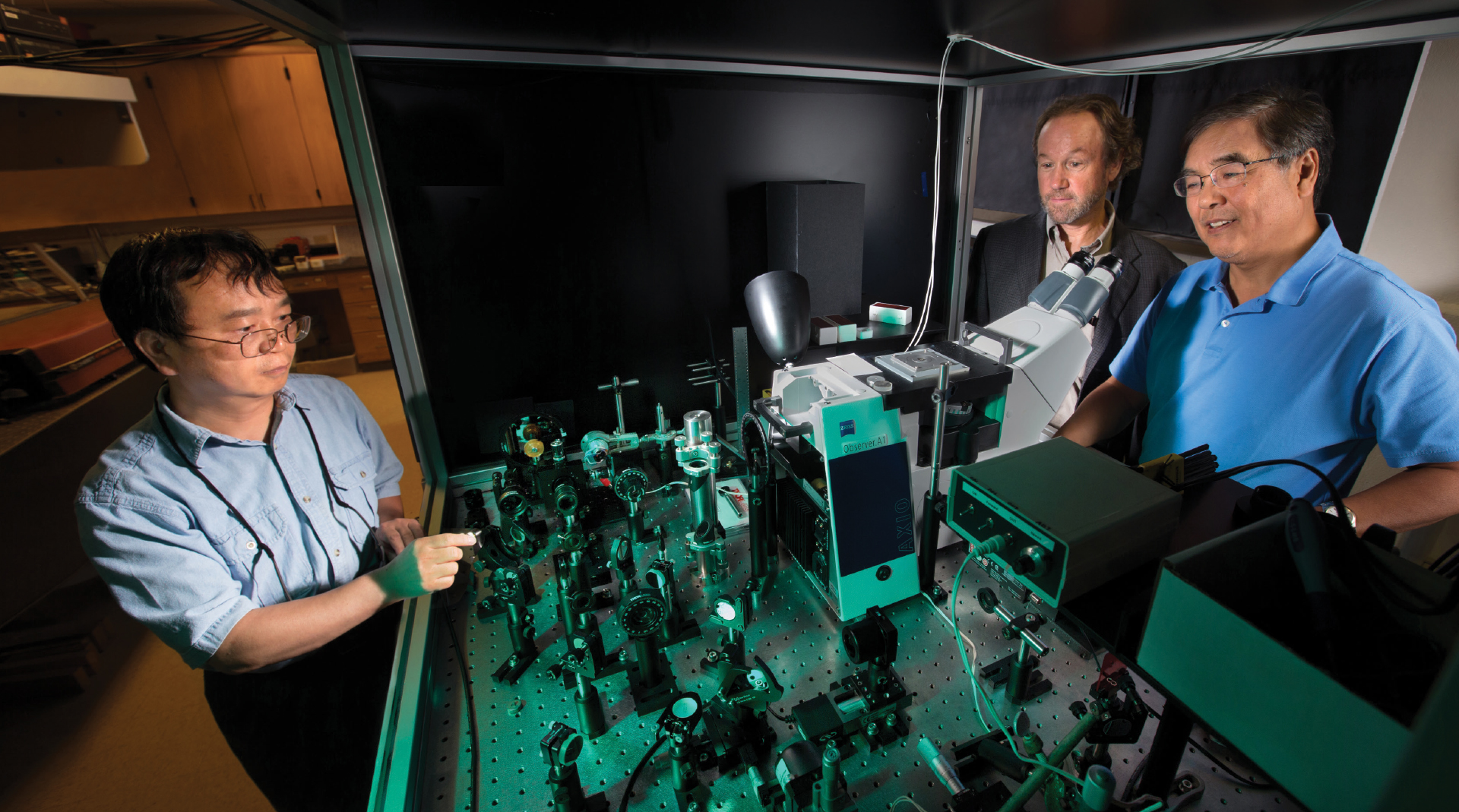 Dr. Dennis Stuehr knew he had received an unusually strong undergraduate education in chemistry at BGSU when he got to graduate school at the Massachusetts Institute of Technology (MIT) and found himself more than prepared. Almost 35 years later, his impression was confirmed when he found at Bowling Green just the expert he needed to continue his research into the critical biological process of nitric oxide (NO) production.

Dr. Peter Lu, Ohio Eminent Scholar in photochemical sciences, is the BGSU faculty member with the rare combination of knowledge, expertise and technical equipment that Stuehr, a researcher with the Cleveland Clinic, was seeking. Their partnership is already yielding rich results of medical and biological importance.

The two have a grant from the National Institutes of Health (NIH), and have just published the first paper on their research, in the journal Proceedings of the National Academy of Science (PNAS). In accepting the paper for publication, the journal editor, a Nobel laureate, gave it high praise, Lu said.

Stuehr, Lu and their team show precisely how the calcium-binding protein calmodulin enables NO production by the NO synthases, which are enzymes that control innumerable biological processes, including blood pressure, memory and immune defense.

The article is titled “Single Molecule Spectroscopy Reveals How Calmodulin Activates NO Synthase by Controlling Its Conformational Fluctuation Dynamics.”

Stuehr, a 1980 BGSU graduate, studies how the body manufactures NO. “It’s a signal molecule,” he explained. “People didn’t know it was used in biology until relatively recently, and when that was discovered, in 1987, it led rather quickly to the 1998 Nobel Prize in medicine.”

NO is an “endogenous vasorelaxant,” which means it is the molecule that all animals and humans use to open their blood vessels. It has contributed to the development of drugs ranging from blood pressure medications to Viagra. 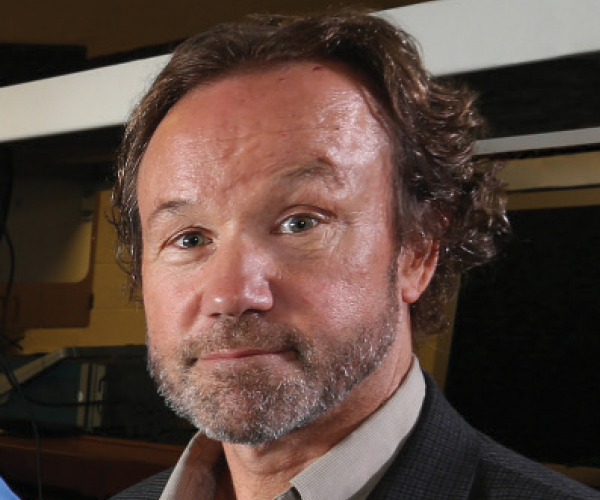 When Dennis Stuehr arrived at Bowling Green in 1976 as an undergraduate from Parma, Ohio, he found an energetic chemistry faculty who set rigorous standards and were highly committed to their students.

“I’m really proud of my BGSU chemistry training,” Stuehr said. “You should have seen how well prepared I was when I got to MIT. I didn’t realize just how good it was until several years later when they told me I was the top recruit in that class. And when I went into the labs, I already knew how to do everything. I had worked in the BGSU labs during the summers and through the school year. It was such good training for an undergraduate.

“I worked in Dr. Elliott Blinn’s lab. Working with him was a lot of fun, and he really took an interest in his students.” “I was one of three BGSU chemistry students they (MIT) accepted that year into a Ph.D. program. We were so much better trained than everyone else. I had taken Dr. (Thomas) Kinstle’s advanced organic chemistry graduate level class my senior year, and I found we were using the same book in the graduate class there.”

Stuehr kept up his contact with Blinn when he moved to the Cleveland Clinic. “He sent me students for summer jobs. I got some really good students from him,” Stuehr said. “One of them, Dennis Wolan, worked for me and he did so well that we hired him as a full-time technician when he graduated. Then he applied to and was accepted in a graduate program at Scripps Research Institute.

“He must have been their best graduate student. He produced five high-end, really good papers. They liked him so much that they ultimately hired him as a junior faculty member.” “I’m so proud of him,” Stuehr said. “He was from my same neighborhood in Parma, Ohio, only 20 years later. He was like a BGSU son, and he’s still doing really well.”

But how does the body produce it? This question has formed Stuehr’s life work. His lab has made numerous discoveries over the years, and as more is known, his interest has only grown.

When he applied for a grant from the NIH to study calmodulin’s role in NO synthase, the review committee recommended that he collaborate with a single molecule specialist, and that is when Stuehr found Lu at his alma mater.

Lu has made significant advances in high-resolution microscopy. He continues the long tradition of BGSU’s leadership in the field of photochemical sciences, established in the 1970s by Dr. Douglas Neckers, McMaster Distinguished Research Professor Emeritus of Chemistry.

For Stuehr and his Cleveland Clinic colleague Dr. Mohammad Mahfuzul Haque, Lu and BGSU researcher Yufan He developed a technique called single molecule photon stamping spectroscopy, to study the fluctuations in the NO synthase enzyme.

“He’s gazing at the behavior of single molecules over 60 seconds,” Stuehr said. “There’s been a story building about what calmodulin was doing, but we had to look at it at the molecular level. This approach could finally show what was happening.”

“Each enzyme is like an individual person,” Lu said. “So we have to have a way to follow one single molecule very precisely and make a ‘movie’ of it so we can know what it is doing.”

Stuehr is energized by the connection with the BGSU lab. “It’s a neat combination. Peter’s and my expertise don’t really overlap, and we sort of speak different languages, so it’s been fun in that way, too.”

Stuehr’s involvement with NO goes back to his graduate student days at MIT “Everyone wondered how were animals making nitrogen oxides. Up to that point, it was thought they were produced only by microbial systems,” Stuehr explained. Stuehr’s Ph.D. thesis identified an immune cell that could synthesize nitrogen oxides. His discovery was published in 1985.

Since Stuehr’s first engagement with it, NO has proven an endless source of fascination and discovery. “NO synthases have a lot of interesting and unusual things about them not seen in other enzymes,” he said. “They do really cool tricks with the chemistry. There’s an emerging understanding on how NO synthase and its products are impacting many biologic systems.”

With Lu and Stuehr’s involvement, many of the questions may soon be answered.