2018 presentations include Ohio Academy of Sciences, Symposium on Psychology, Psychiatry and Behavior at University of Toledo and Society for Neuroscience in San Diego.  Here is Ken Myers at the Symposium at the University of Toledo in May, 2018. He presented his work on animal models of gambling-like activity.  He is discussing his work with Ann Mary Mercier who works up at the UT Medical Center and is a BGSU alum.

Justin McGraw and Rob Goldsmith presented their work on relative reward valuation in alcohol preferring rats.  The team worked hard in 2017 and received a lot of feedback and positive comments at SFN in Washington DC.

Zack Knauss did a great job presenting the work on work effort.  He chose the high effort option of coming to Washington DC and presenting the poster.  We found that the order of effort experience makes a significant difference in the amount of effort choice.  He received accolades from world's experts and immersed himself into the neuroscience field at the meeting.

BAM lab in 2016 so far has attended and presented at regional and national/international meetings.  Justin McGraw presented his work on ethanol and motivation at the Research Society on Alcohol in New Orleans.  Casey attended the NEUROQUALIA workshop in Halifax and several undergraduates presented at the annual research symposium. Including Luke Zona, Ben Fry and Jacob Lalonde.  This team was highly productive and completed a very interesting study on the effect of endogenous cannabinoids and motivation.

Melanie Queener next to the poster that covers our work on effort, relative revaluation and choice!

Josh presenting his work on striatal lesions and rat choice behavior at SFN Chicago in 2015.

Brittany Halverstadt had a big crowd interested in the relative reward effect of VARIETY!

She spoke with researchers and obtained some good feedback.

Josh Ricker at the research poster session.  His work focused on choice behavior using a three box apparatus.  Animals could move freely to express choices between two boxes separated by a middle box.  The research has implications for decision-making and choice based on motivational and emotional processes.  Something highly relevant to the topic at IBNS in Las Vegas- impulsive behavior!

Actually the picture is at the BGSU Schanklin awards but the poster is very similar to the data she presented at SOBP meeting.

Her work was on inequity aversion in the rodent model.  Very exciting and novel work!

The poster sessions are good for all ages. Leela Cromwell had questions for the students.

Abe Lincoln oversaw the proceedings and was quite pleased with the 2011 SFN event.  Kimberley Binkley and Emily Webber presented their work at the meeting in Washington DC.  Dan Powers (neuroscience undergraduate at BGSU) also attended.

Kimberley Binkley (left) and Emily Webber  (right) had numerous visitors to their work and discussed reward processing, brain and behavior.

Casey gave a talk at the May 2010 Jaak Panksepp Festschrift.  The event was a major success with over a dozen speakers from worldwide converging on Bowling Green to talk about affective neuroscience and present data.

The talk was on ' Early Pup Social Motivation' and described work using the Nelson and Panksepp (1996) maternal odor conditioning paradigm.

Casey went to give a talk in Thailand at Mahidol University at Salaya in December of 2009.

He visited the Neurobehavioral Biology Research Center at this institution and gave a seminar entitled 'Neural Signals of Reward Integration'. 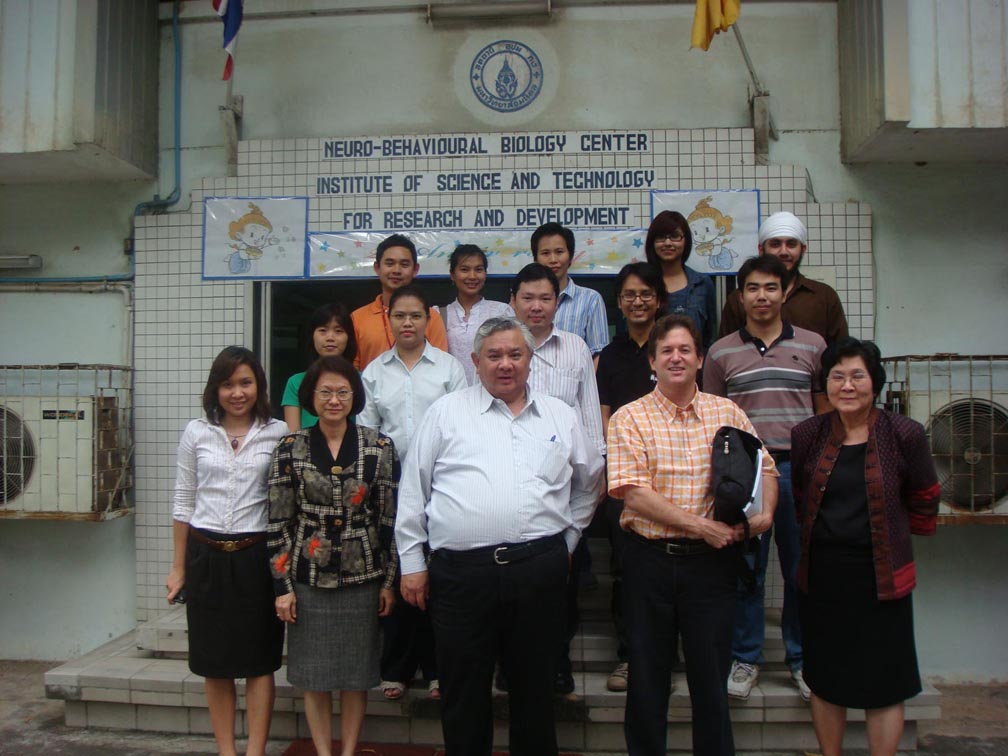 Group Photo at the Institute: Hosts were Prof. Piyarat Govitrapong (1st row far right) and Prof. Naiphinich (Nick) Kotchabhkdi (first row in the middle).  There is a growing neuroscience community in Thailand with opportunities for research exchange in the future.

Chicago for Society for Neuroscience (2009) was a great success!

We had 5 posters on our recent work presented: 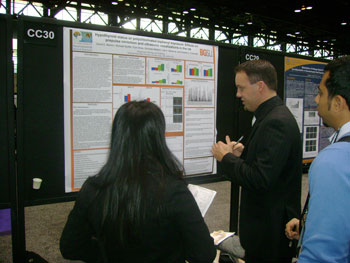 David Mankin explaining his research at SFN in Chicago.  He had many questions from researchers...and came up with excellent responses!

Kelley Harmon having fun and presenting her work.
This poster was presented at the Ohio Academy of Sciences Meeting. 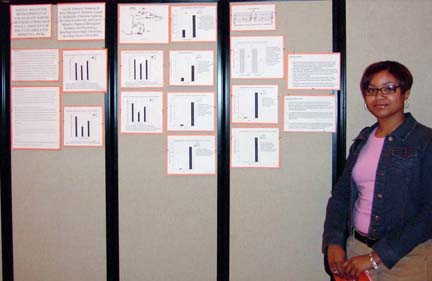 Asia Johnson at her poster at the BGSU Research Conference 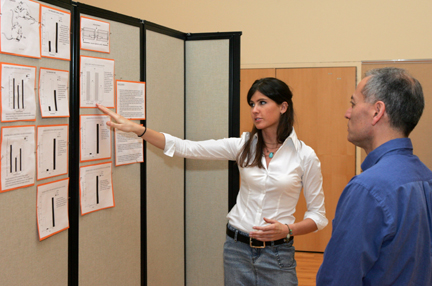