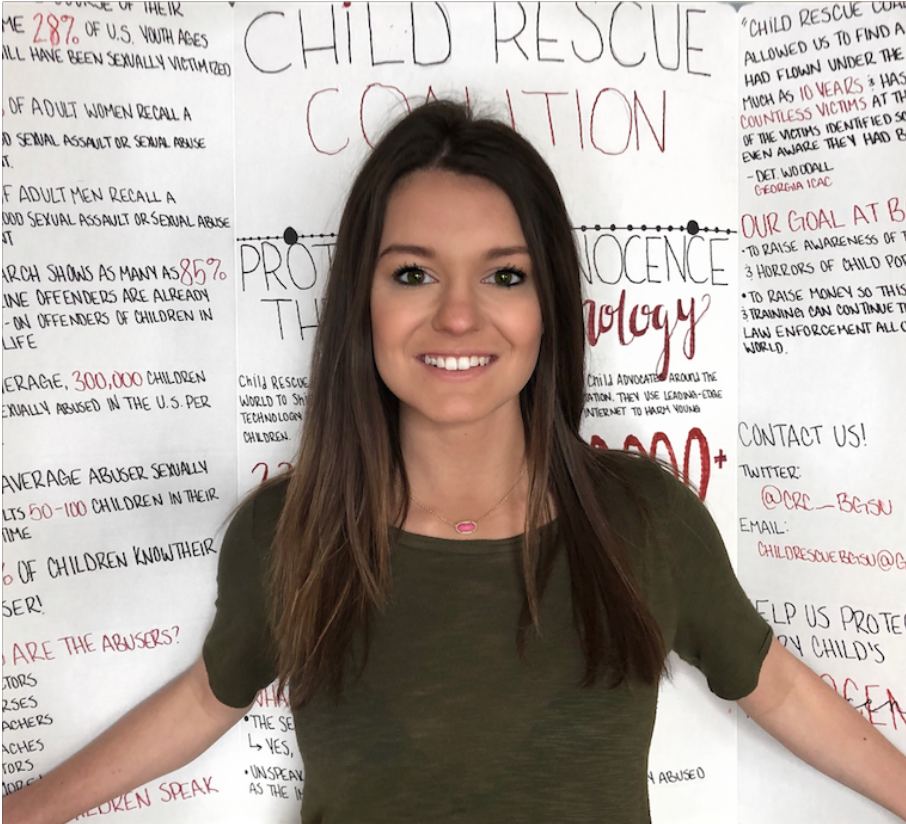 A new organization has made its way to Bowling Green State University (BGSU) thanks to Journalism and Public Relations major Jen Riess. Riess became passionate about the Child Rescue Coalition (CRC) because after watching a video of Blake Lively explaining the organization.

“The video really tugged on my heart so I went the CRC website and explained that I was a broke college student, but wanted to help in any way I could,” said Riess. “Then Desiree Asher, the managing director of CRC, emailed me and told me about their campus initiative”.

When the organization reached out in hopes of bringing an organization to northwest Ohio, she couldn’t pass up the opportunity.

The Child Rescue Coalition is a non-profit organization that enables law enforcement to track, arrest, and prosecute child predators. The organization is proud of its exploration of a “leading-edge technology that identifies, monitors, and ranks the online criminal behavior of child predators on peer-to-peer file sharing and chat networks”.

Riess shares that the technology is profound.

“CRC has the only technology like this in the world. With this, they have saved over 2,000 children and have put 10,000 predators behind bars,” she said.

Because Toledo is such a hub for human trafficking, Child Rescue Coalition wanted a chapter close by in hopes of prosecuting predators and making people more aware of the problem. Riess applied for BGSU to become the newest chapter and was granted the opportunity.

Riess is excited about this opportunity because it is the first campus chapter for CRC.

“BGSU is the first college in the United States to have a chapter. The student population here in Bowling Green really cares about children. I’ve been involved in Ziggython for the past three years and I am blown away by the amount of support the campus gives to help sick children,” she explained.

Riess explains that while incredibly eye-opening and sad this situation is, it is extremely important for people to know, especially those in the fields of education and journalism.

“They [the Child Rescue Coalition] was really impressed by our Education and Journalism programs. Future educators need to be able to pick up on abused children and journalist need to report it,” she said.

While these two majors are strongly advised to join the organization, everyone is welcomed.

“Absolutely anyone can join!” said Riess. “Our main goal as an organization is to raise awareness of the horrors of child pornography and to raise money so this technology can continue to be to law enforcement so child pornography can be stopped.”

To join this organization, Riess says to OrgSync and to keep an eye out around campus.

“Our OrgSync page is set up, I have been giving presentations in different class to ask students to get involved. We are going to have a union table and a few fundraisers in the near future to give students the opportunity to join as well,” she said.