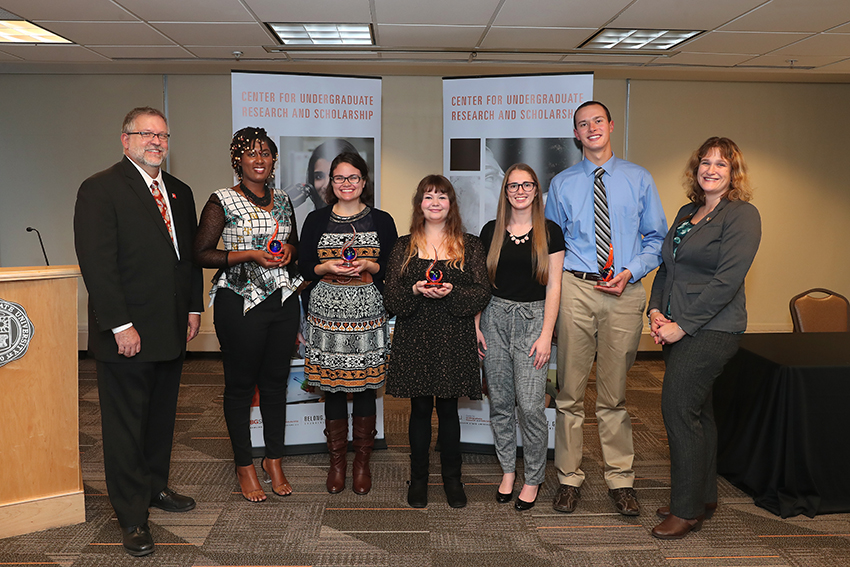 Eleven undergraduate and graduate students were honored Nov. 26 for their presentations about their education abroad experiences at the fifth annual Embracing Global Engagement symposium in October. Sponsored by the Bowling Green State University Center for Undergraduate Research and Scholarship (CURS), the symposium provides a venue for students to share what they learned, through oral, poster and video presentations.

Joined for the occasion by their faculty mentors and family members, the winners received a handmade glass award by former BGSU art faculty Austin Littenberg, depicting a blue globe embraced by BGSU orange. The symposium participants did encircle the globe, having studied in Europe, Asia and Africa. Dr. Cordula Mora, CURS director, noted that this year’s symposium was the first to include graduate and international students, adding additional perspectives to the event.

They may not have thought about it before, but the 11 students honored have benefited not only themselves through their activities but the University community as well, Interim Provost John Fischer told them at the ceremony.

Fischer said, “Your role on campus is incredibly important, as we welcome international students here and encourage other students to go abroad. The whole process of internationalizing the campus is important if we are to understand our university’s role in the world.”

Fischer referred to BGSU’s maxim to “belong, stand out, go far,” telling the students that going far is just the first step. Then they must “come back and help change us.” They can have a large impact on students who may never have left the country or even Ohio, he said, especially in raising awareness about cultural assumptions and our own self-awareness.

That theme was echoed in undergraduate poster presentation winners Kayla DeMuth and Justin Newcomb’s project “Intercultural Wonderment.” Under the mentorship of Dr. Laura Landry-Meyer, an associate professor of family and consumer sciences, as part of their Cultural Explorations class traveling across Italy, DeMuth and Newcomb conducted a qualitative analysis of student reflections on study abroad experiences in the country. Landry-Meyer said they did find “intercultural wonderment,” or the process of becoming comfortable with being uncomfortable — a key gain from either going abroad or living in a different environment in one’s own country. DeMuth and Newcomb both graduated in May and are employed as certified family life educators.

In the graduate division of the poster presentations, the team of Alex Bakhaus, Ivy Keen, Kiara Vance and Jody Kunk-Czaplicki won the glass award for their analysis of “Student Democracy in Scottish and English Higher Education,” which took them on a study tour of eight universities and several organizations to observe how student affairs functions there. Their mentor was Dr. Ellen Broido, a professor of higher education and student affairs.

In oral presentations, the undergraduate winners were Olivia Henderson and Bryant Kuhlman, who shared their educational experiences in Thailand. Their mentor, Dr. Gabriel Matney, professor of teaching and learning, praised them for their insightful efforts to “engage students in a culture they’ve never met,” and understand the role and impact of Buddhism in Thailand’s philosophy of education and its classrooms. 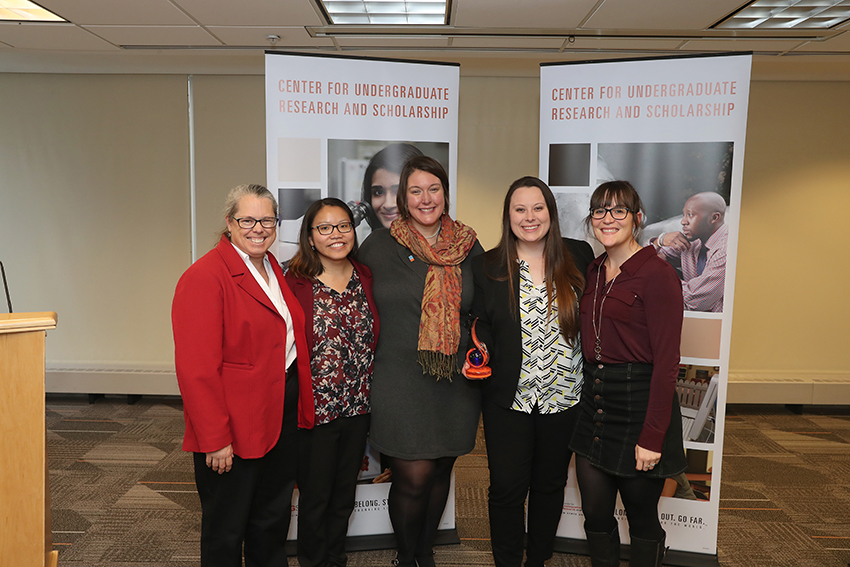 Hoskins Global Scholar Ashley Mitchell, a mentee of Akiko Kawano Jones, director of the Asian Studies Program, also won for sharing her study “Cities, Shrines and Their Coexistence” in Japan. Mitchell spent a full year in Japan, during which she traveled the country visiting and learning about the meaning of the many shrines and their role in the religious and cultural life of the nation and its people.

The graduate winner of the oral presentations division was Amelia Amedela Amemate, an American culture studies
major from Ghana, for her work on “Challenging Toxic Gender Norms in Hostile Spaces: Observations from Ghanaian Culture.” Her mentor, Dr. Timothy Messer-Kruse, professor of ethnic studies, praised her for her “integration of activism and scholarship” and her courage in standing up for her beliefs. Amemate has challenged the patriarchal restrictions upon women of her home country and said she appreciated being in the United States, which has come farther in those terms than have some other places.

“The Nature of Samurai” was the winning video presentation, by undergraduate Laura Eitel, an Asian studies major who also worked with Kawano Jones. Her video explored the impact of the philosophy and social rules of the samurai and their impact on the Japanese way of life. As part of her study abroad, Eitel also participated in BGSU’s Peace Studies 10-day stay in Hiroshima.