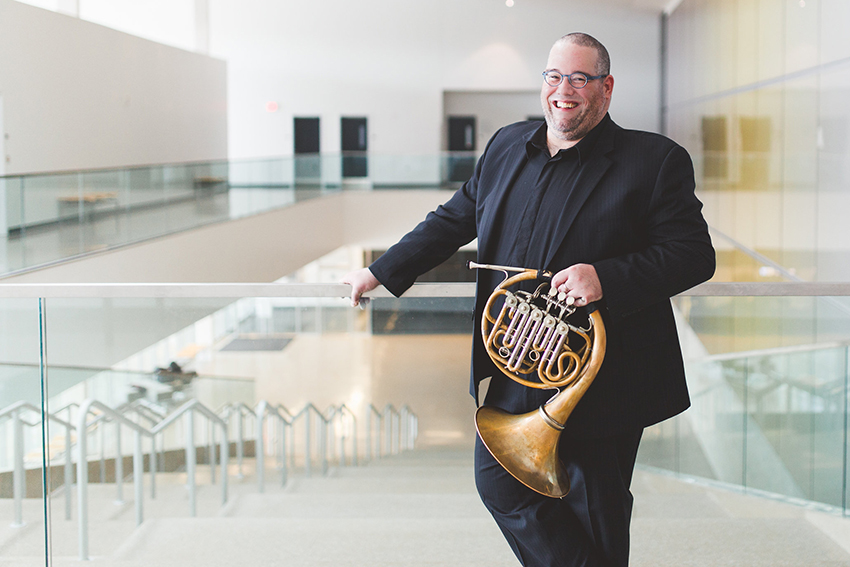 It would be hard to find a more enthusiastic proponent of the horn than Dr. Andrew Pelletier, Bowling Green State University horn professor. Now, in addition to his Grammy Award-winning performances and his teaching and student mentorship, Pelletier has been named president of the International Horn Society. The only international association for horn players and scholars, the society presents international symposiums, competitions, workshops, newsletters and The Horn Call journal.

Pelletier is quick to point out that “by horn, we mean only the French horn.” Although the instrument is widely known by that name, it has fallen out of favor with musicians, who prefer the simpler “horn.”

Pelletier has been a member of the International Horn Society since he was in high school, and had just begun his second, three-year term on its 15-member Advisory Council when he found himself elected president.

“It had been a longtime fantasy of mine but I was still taken by surprise when it happened,” said Pelletier, who has served the society is a variety of ways over the years, including as coordinator of scholarship programs, member of the digital eNewsletter committee and Ohio regional coordinator.

Pelletier took up the horn as a sixth-grader in Lewiston, Maine. After earning his bachelor’s degree from the University of Southern Maine, and master’s and doctoral degrees from University of Southern California, where he was voted Outstanding Graduate of the Class for both degrees, he played as a freelance musician in Los Angeles for about 10 years before joining the BGSU faculty in 2004. He can be heard on a number of film and television soundtracks.

He is passionate about the horn and about the horn society, whose members include serious high school and collegiate players as well as professionals such as band directors.

“As president, I would love to see it expand at both ends of the horn-playing spectrum to include the highest levels of professional players and beginners such as middle school kids. I'd especially like to have adult amateurs be a greater part of it,” he said.

The regional workshops and the annual symposiums are important aspects of supporting and encouraging members around the world.

“The president oversees the process and works hand in hand with the executive committee to create the bids for the location of future symposiums,” Pelletier said.

The last two annual meetings have been held in Natal, Brazil, and in the United States in Muncie, Indiana. Next summer’s will be over the Fourth of July in Ghent, Belgium, where the group will attempt to get in the Guinness Book of World Records with the largest horn concert in history, playing a piece by a local composer from Ghent.

“Over the last decade, the symposiums have been so much fun, with great teaching and playing,” Pelletier said. He has appeared as a soloist at the annual symposiums numerous times.

Although the musicians specialize in horn, the symposiums also include players of the Alphorn — “the long horns you see in the Ricola commercials,” Pelletier said humorously. “They can be played outside and they have a rich, huge sound. They were traditionally used to play regional folk music of Switzerland.”

Today they have a huge following, he said, and are even being used to play jazz. In fact, jazz is a new and upcoming genre for the horn, he said. “We’ll have an all-star big band of horns backing up jazz artists.”

Also gaining in popularity is the natural horn, or hand horn, which has no valves. Although a historic instrument that largely disappeared with the invention of the valve in the mid 1800s, it has grown in prominence since the early music Renaissance of the 1950s and ’60s, with several players now specializing in performing solely on this type of horn.

“A whole new crop of 21st-century composers is writing for it,” Pelletier said. “It has a different sound and a dramatic quality. I love it.

“At the end of the day, we’re all horn players. We have fantastic camaraderie and fellowship.”

It is obvious that, far from seeing the horn as an instrument confined to the orchestra playing classical repertoire, Pelletier embraces all its possibilities. He is devoted to new music and has commissioned and premiered a number of works for solo horn by leading composers. His solo tours have taken him around the United States and the globe.

He was the First Prize winner of the 1997 and 2001 American Horn Competition (America’s only internationally recognized competition for the horn). The Los Angeles Times lauded his “gleaming, handsome playing. Pelletier is a soloist who seems capable of anything on his instrument.” Fanfare Magazine called him “phenomenal … undeniably in tune with what he plays,” and the American Record Guide has praised his “full sound and playing with authority and imagination.”

A sought-after teacher and mentor, he is in regular demand for artistic residencies and clinics at universities and music schools. His pedagogical articles have been published by the International Horn Society, the Norwegian Horn Society and the New England Horn Society.

He seems to have found his ideal home in the College of Musical Arts.

“I absolutely love BGSU,” he said. “The students here are phenomenal to work with and there’s a great cultural life in the college.”

When he’s not teaching, Pelletier is an active chamber musician, performing with Southwest Chamber Music in California (with whom he won the 2005 Grammy award for Best Classical Recording, Small Ensemble) and the Motor City Brass Quintet in Detroit, among others. He is also the principal horn of the Michigan Opera Theatre at the historic Detroit Opera House and has performed as guest principal horn for the Los Angeles Philharmonic (under Music Director Gustavo Dudamel) and numerous others. He has also performed with the New West Symphony, the Portland (Maine) Symphony Orchestra and is a founding member of the Portland Opera Repertory Theatre.