As digital artists at NASA, a trio of Falcons communicates the importance of space exploration to the public

While that’s accurate, NASA also makes discoveries and launches innovations that affect life on Earth too.

The science, technology and engineering marvels enabling all of NASA’s missions, along with the data collected, are often complex and difficult to understand.

As a result, digital art has become an essential tool in communicating more broadly to the general public the work at NASA and its wide-ranging impact on society. Three Bowling Green State University digital arts majors, including two alumnae and one current student, have been integral to that endeavor, and their digital creations represent the University on a global stage.

BGSU alumnae Morgan Johnson ‘22 and Heather Monaghan ‘17 are graphic designers and illustrators for NASA’s Space Communications and Navigation (SCaN) program. Olivia Francese, a senior at the University, is a 3D modeling intern in the virtual reality Graphics and Visualization Lab (GVIS) at NASA's Glenn Research Center in Cleveland. 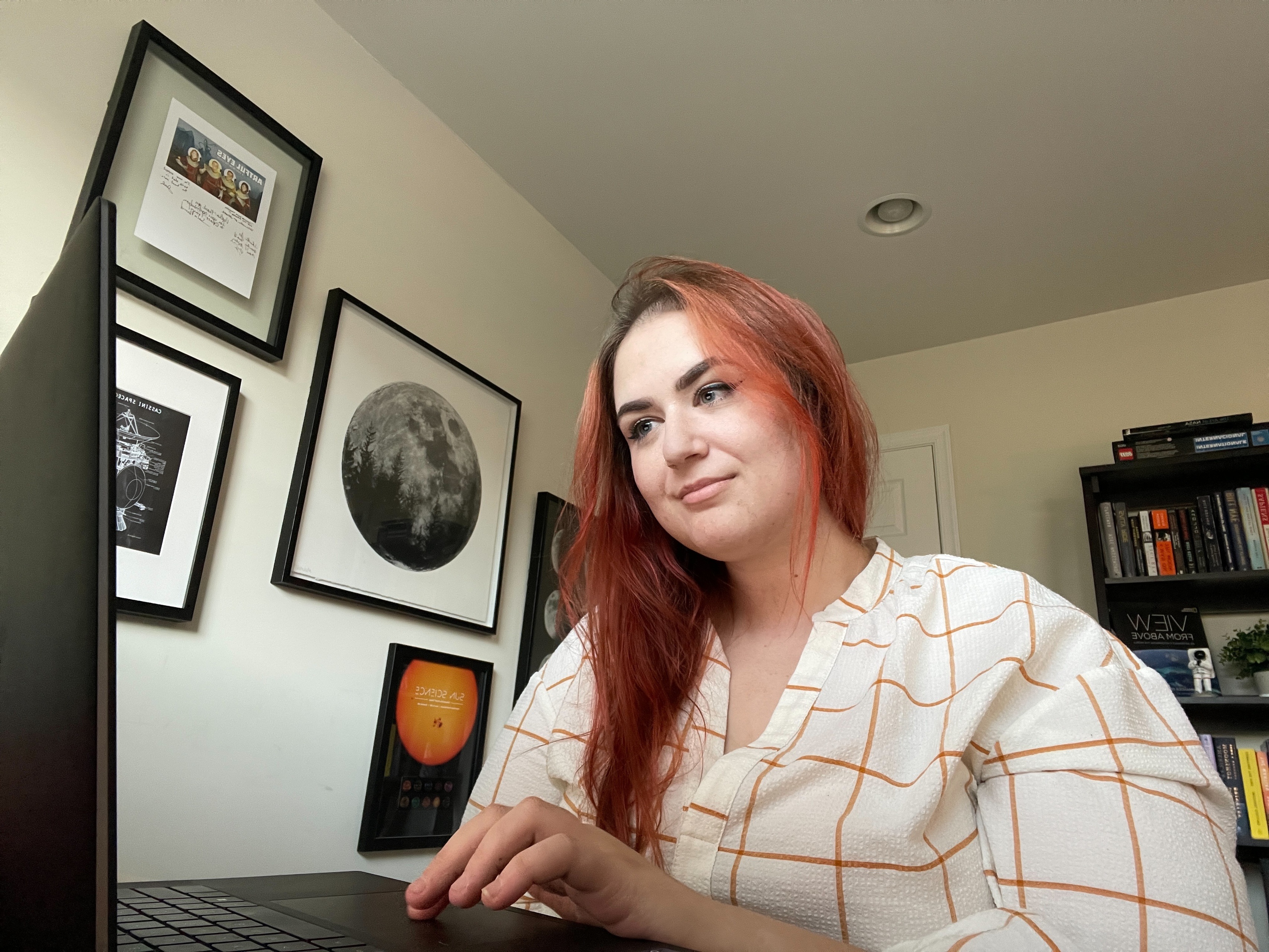 BGSU alumnae Heather Monaghan '17 in her home office near NASA's headquarters in Washington. 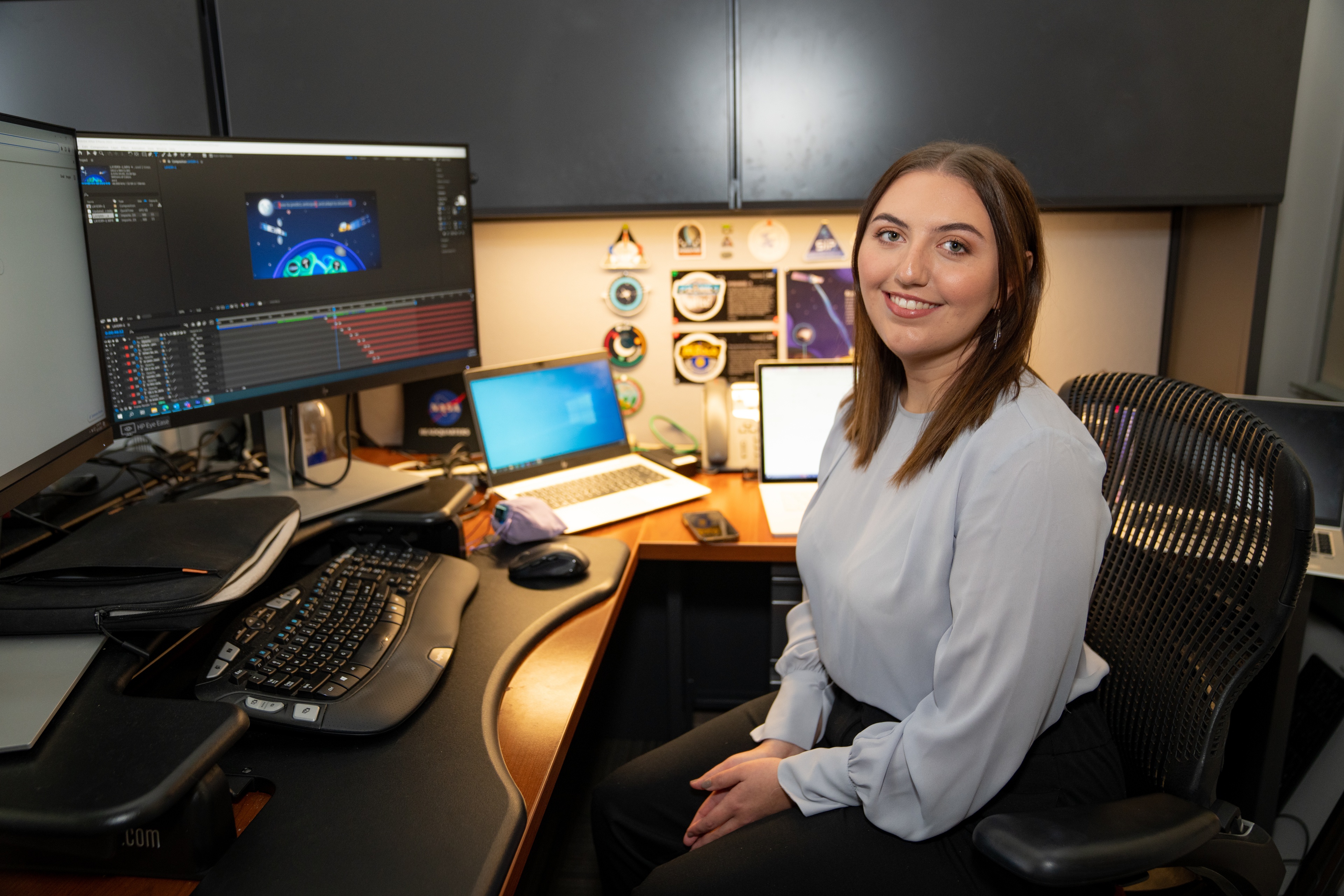 Morgan Johnson '22 works on an animated video detailing the process of cognitive communications at NASA's Glenn Research Center in Cleveland. 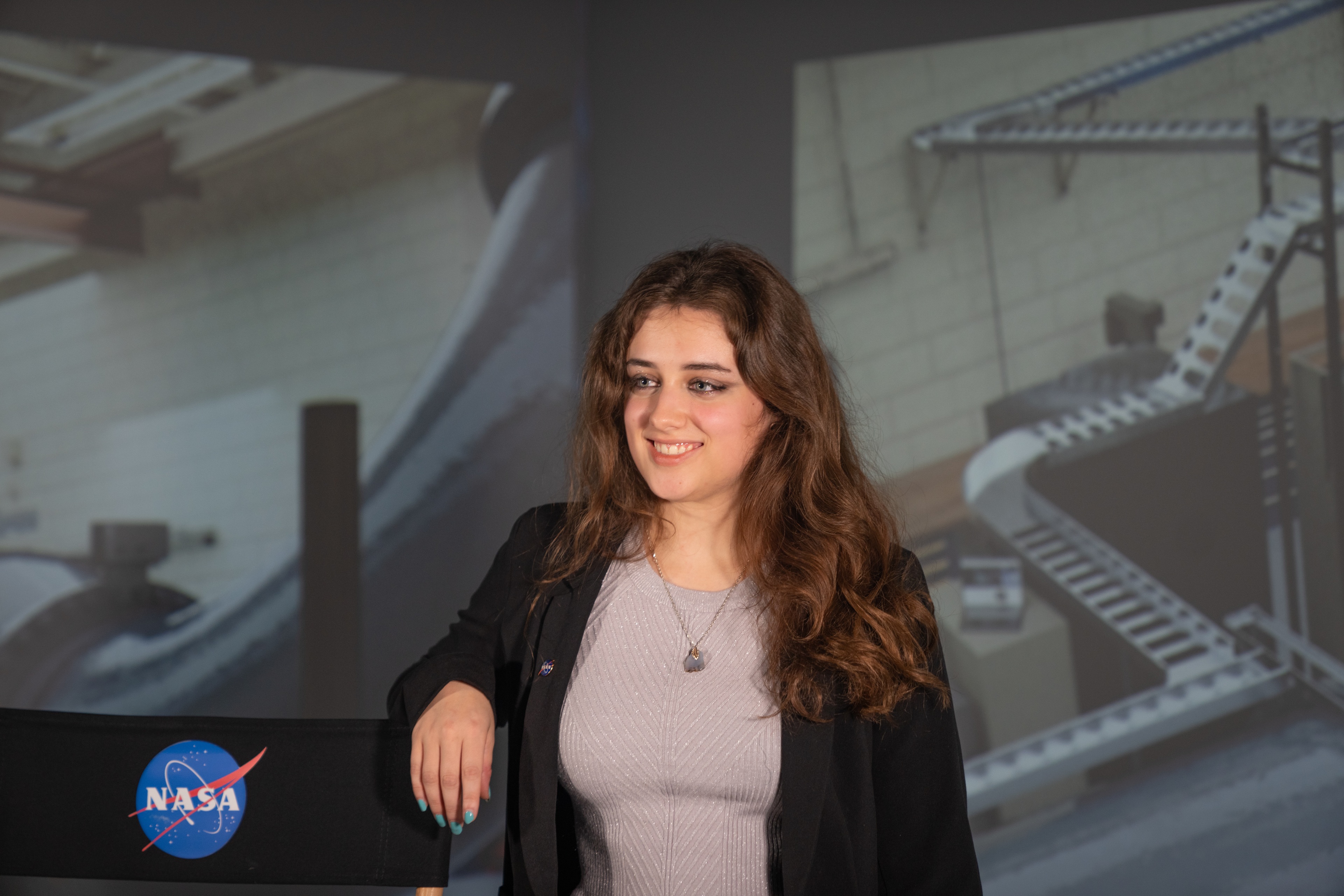 A 3D modeling intern in the Graphics and Visullization (GVIS) Lab at NASA in Cleveland, Olivia Francese stands in front of a model she completed of an aero-testing facility.

My job is to communicate about communications. We have all these different spacecraft, but nobody really thinks about how we send commands to the spacecraft and how we receive data and images from them. I teach people what we do and how all that works.

Monaghan, who has a Bachelor of Fine Arts degree in digital arts from the University, is based at the organization’s headquarters in Washington, though she often works remotely.

Monaghan and her team at SCaN enable the success of more than 100 NASA and non-NASA missions, including providing communications and navigation support for major missions like the recent Artemis 1 and James Webb Space Telescope.

“My job is to communicate about communications,” she said. “We have all these different spacecraft, but nobody really thinks about how we send commands to the spacecraft and how we receive data and images from them. I teach people what we do and how all that works.” 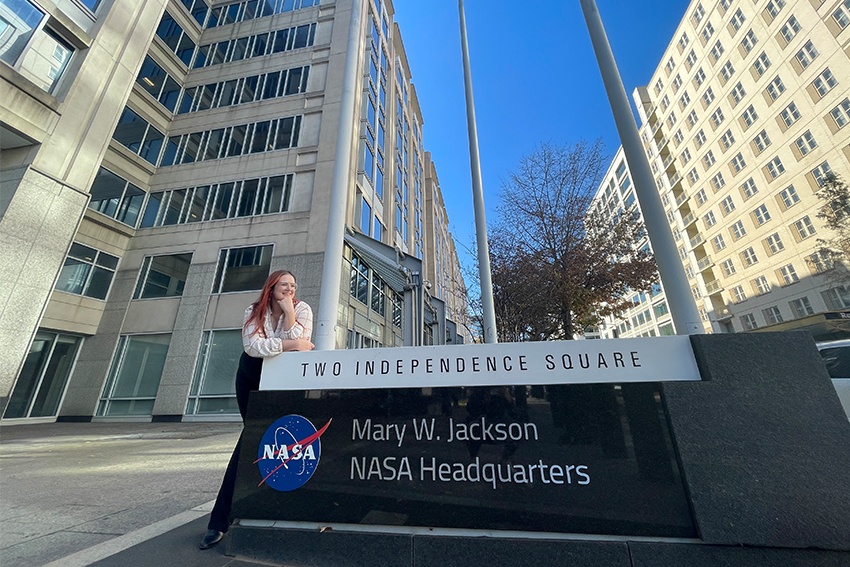 Monaghan outside NASA's headquarters in downtown Washington., a few blocks from Capitol Hill. 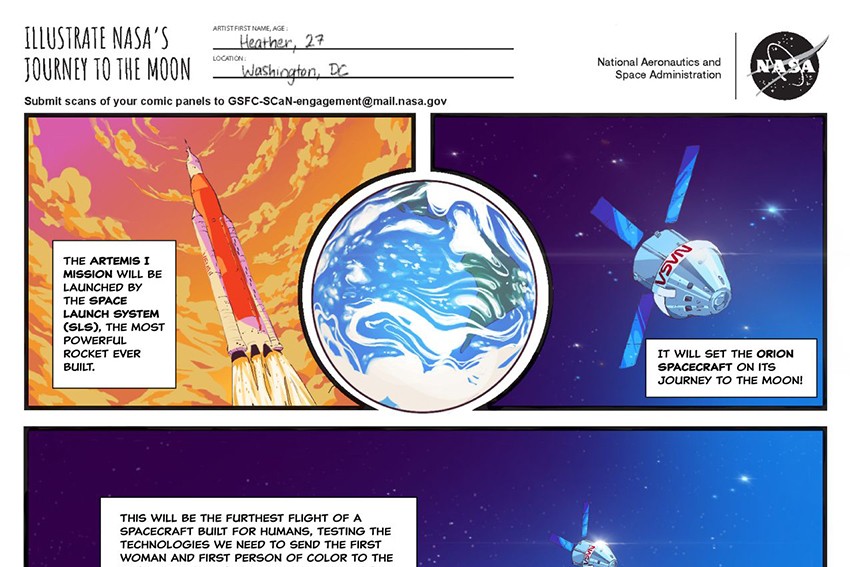 Monaghan created a comic ahead of the Artemis 1 launch Nov. 16, explaining the mission.

As a graphic designer and communications specialist, Monaghan creates graphics, illustrations, posters, social media content and infographics to help make the complexity of NASA’s work intelligible - and fun - to those outside the science community.

Monaghan said educating the public about the essential work at NASA helps inspire the next generation of scientists, engineers and astronauts. Some of Monaghan’s outreach efforts have included comic book illustrations and digital spaced-themed Valentine’s Day cards to appeal to younger generations.

She said it’s also important to make people aware of the numerous innovations and technological and scientific advancements developed by NASA.

“You wouldn’t have things like that without space exploration,” Monaghan said. “There’s amazing, complex science that’s happening at NASA, but it’s pointless if the public doesn’t understand what’s going on. We have to excite them.”

Johnson, who has a bachelor’s degree in digital arts and a minor in biology, was recently hired as a graphics lead for the Glenn Research Center SCaN program office after completing four internships at NASA's Glenn Research Center. In her new full-time role, Johnson said she’ll continue working with project teams at NASA to portray complex processes and technologies through digital art.

“There are so many highly technical people who are so knowledgeable about what they do, but sometimes we need somebody to translate those messages and meet people where they’re at,” Johnson said. “The incredible projects at NASA and in Space Communications and Navigation need to be shared in a way that appeals to people and excites them about the work that's happening here."

A recent project Johnson worked on included an animated video and illustration showing how NASA uses artificial intelligence to reroute communication signals between satellites when there’s interference in the atmosphere. 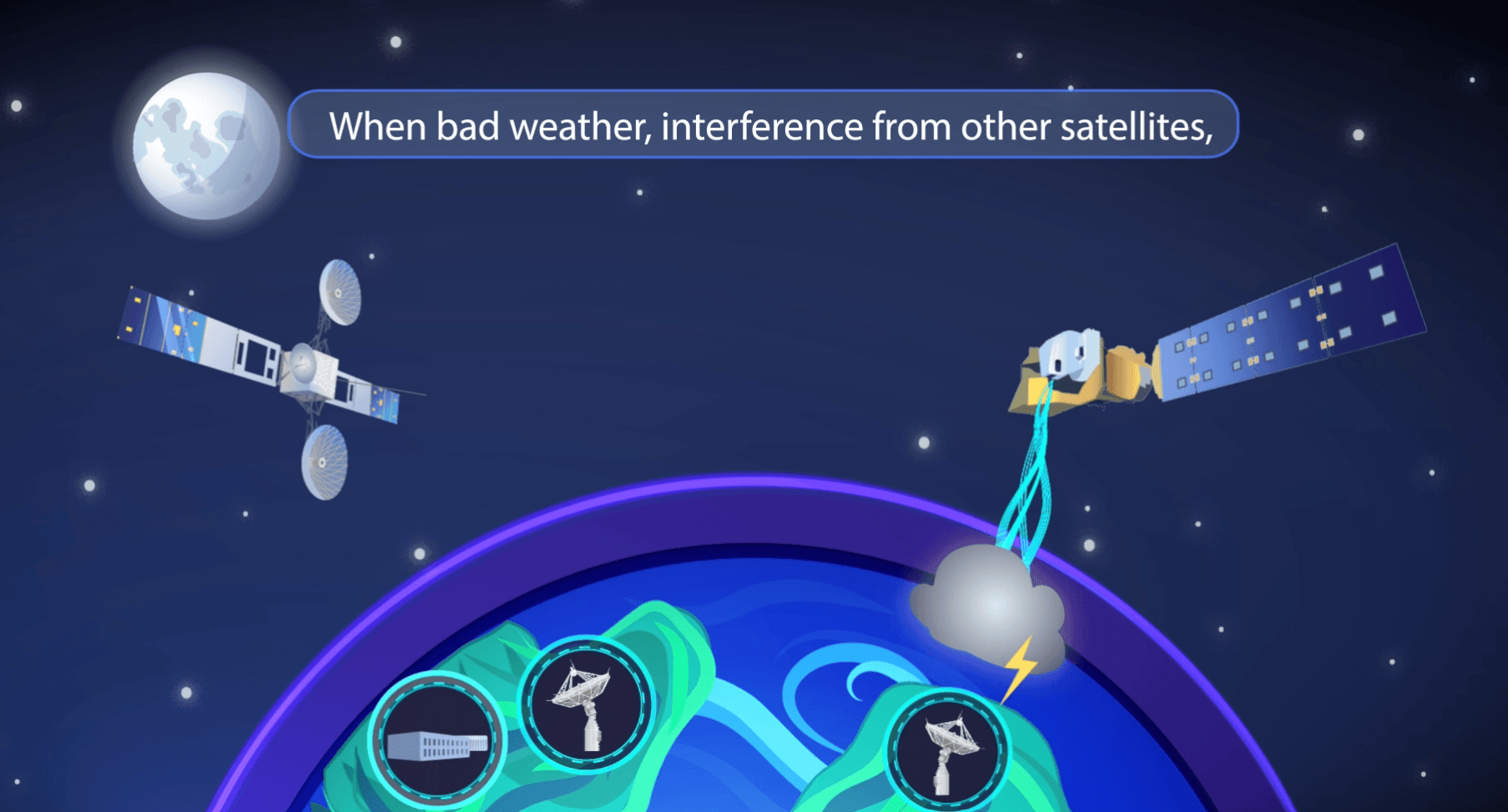 A screenshot from the animated video Johnson is creating to explain cognitive communications. 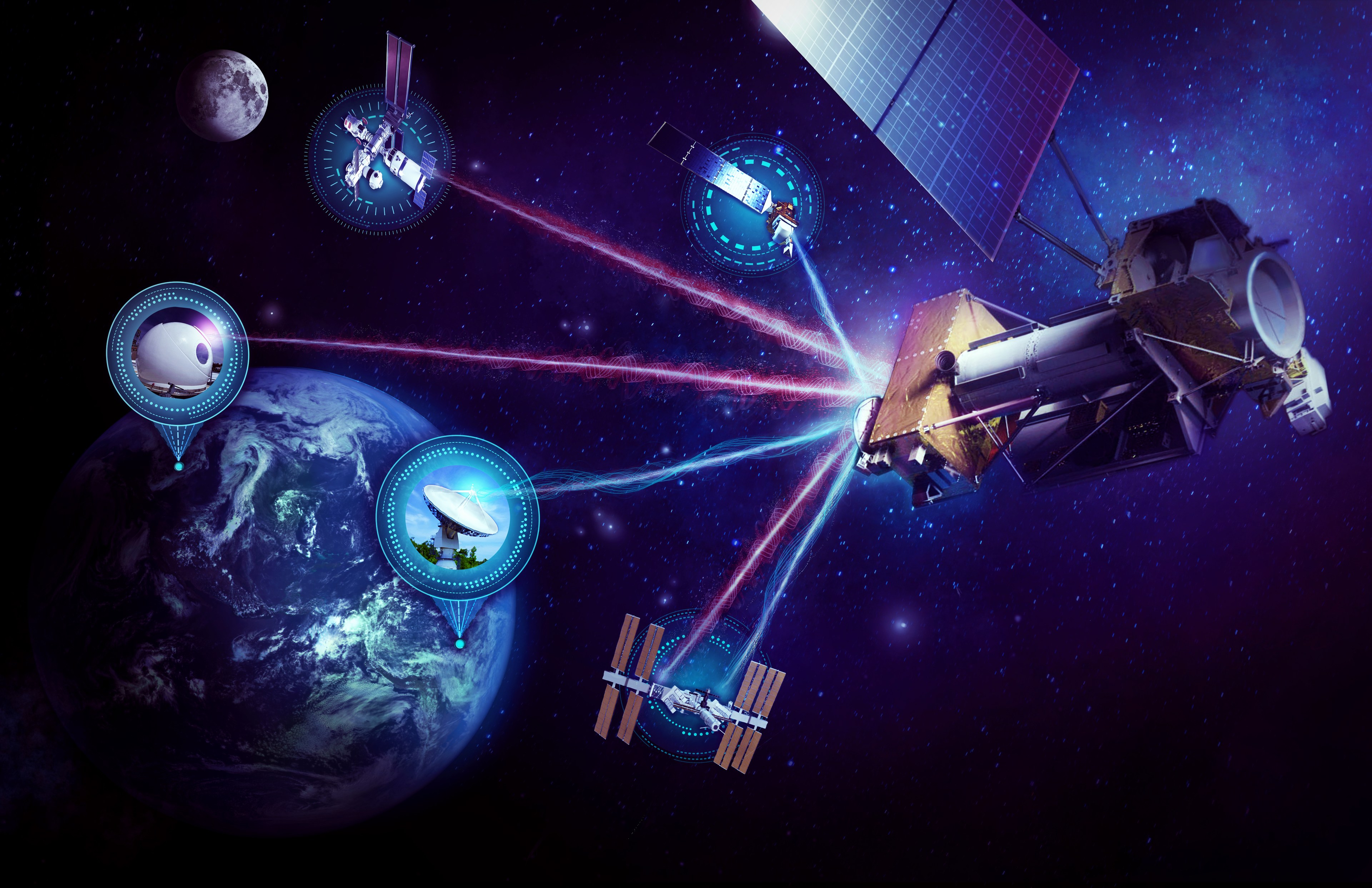 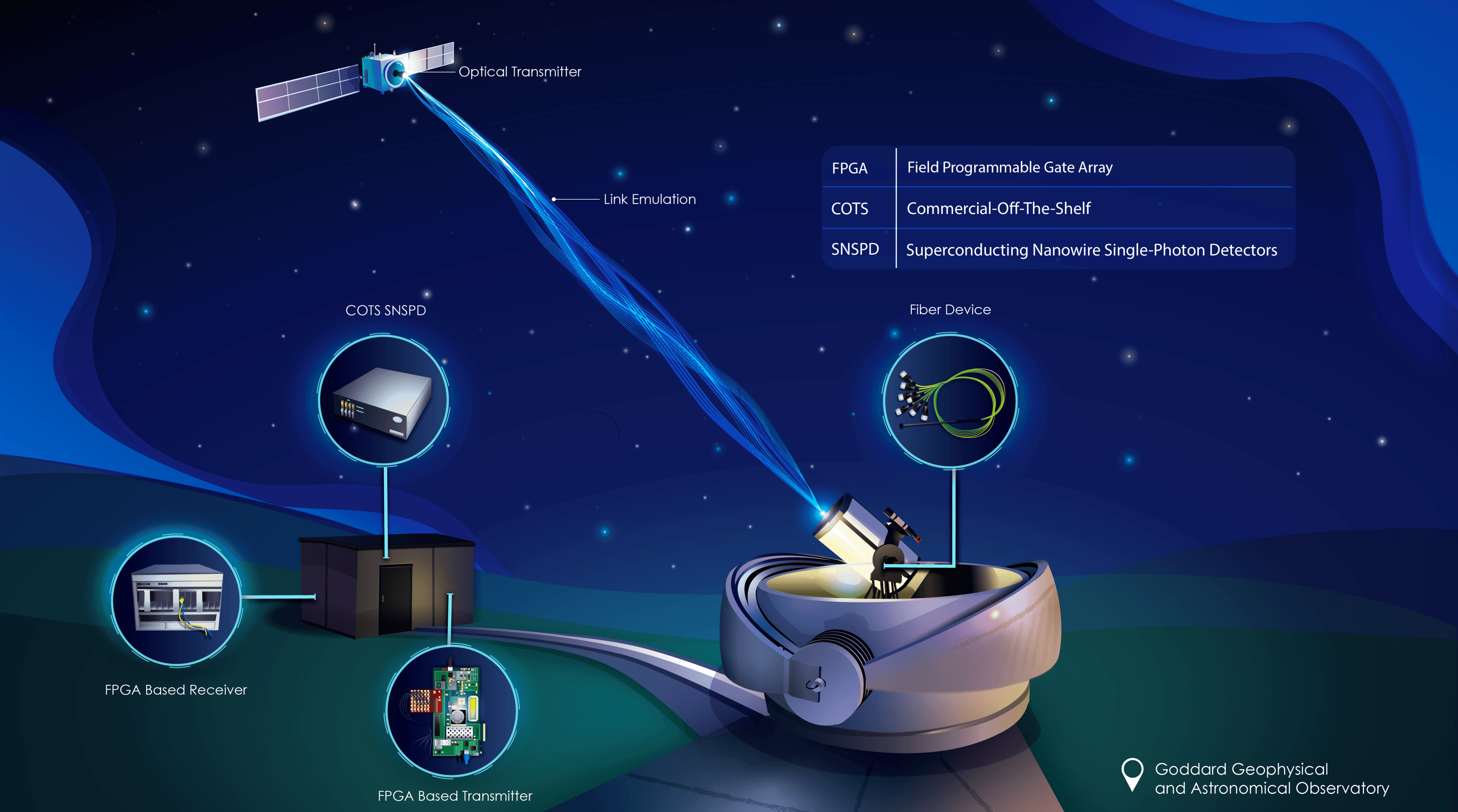 Artist’s rendering of several technologies developed by the Real-Time Optical Receiver (RealTOR) project at NASA’s Glenn Research Center integrated onto a ground station. This future use-case scenario demonstrates how RealTOR technology will be used to enable optical, or laser, communications.

Francese, a BGSU senior majoring in digital arts, has a slightly different role than Johnson and Monaghan. She works in the Graphics and Visualization (GVIS) Lab at the Glenn Research Center, creating 3D models used in virtual and augmented reality.

Francese said the models of testing facilities she receives – including the equipment, walls, floors and cursory items inside – lack real-world color information. It’s her job to add textures, light, shadows and reflections to objects to mimic real life.

Recently, she’s been working on an aero-testing facility. Francese said she uses reference photos and notes taken during facility tours to guide her visualization.

Once complete, the 3D models are imported into software to create a virtual reality experience, allowing the public a view into facilities they may never see otherwise.

“NASA has a very technical vocabulary,” Francese said. “I’m able to take that and visually communicate to the public about what NASA is doing.”

Francese works full time as an intern for NASA and is a part-time student at the University. She works remotely for NASA other than Fridays when she travels from Bowling Green to the NASA office in Cleveland.

From BGSU to NASA

Monaghan was the first of the three Falcons to work at NASA. She interned as a designer and illustrator at the Glenn Research Center in 2018 following her graduation in 2017 from the University.

Monaghan returned to NASA full time in 2020 and soon after received a message from Johnson, who learned of her experiences when a professor in a digital painting class at BGSU used her art as an example.

Johnson reached out to Monaghan for advice on getting an internship at NASA. Monaghan connected Johnson with her current mentor, Molly Kearns, a digital media specialist at NASA, who offered her a shadowing internship in the summer of 2021. Three more internships followed throughout 2021 and 2022. 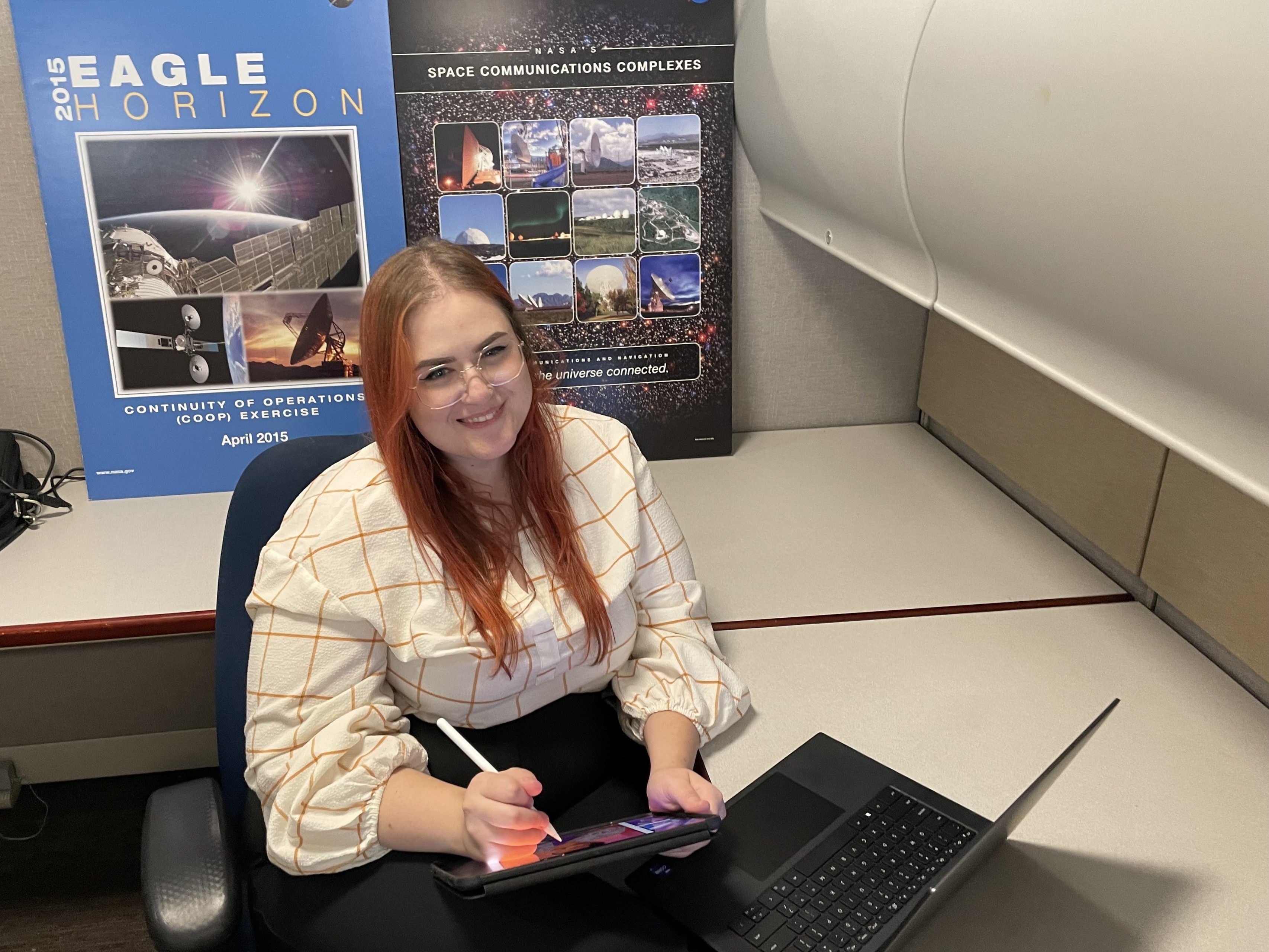 Monaghan working on an illustration. 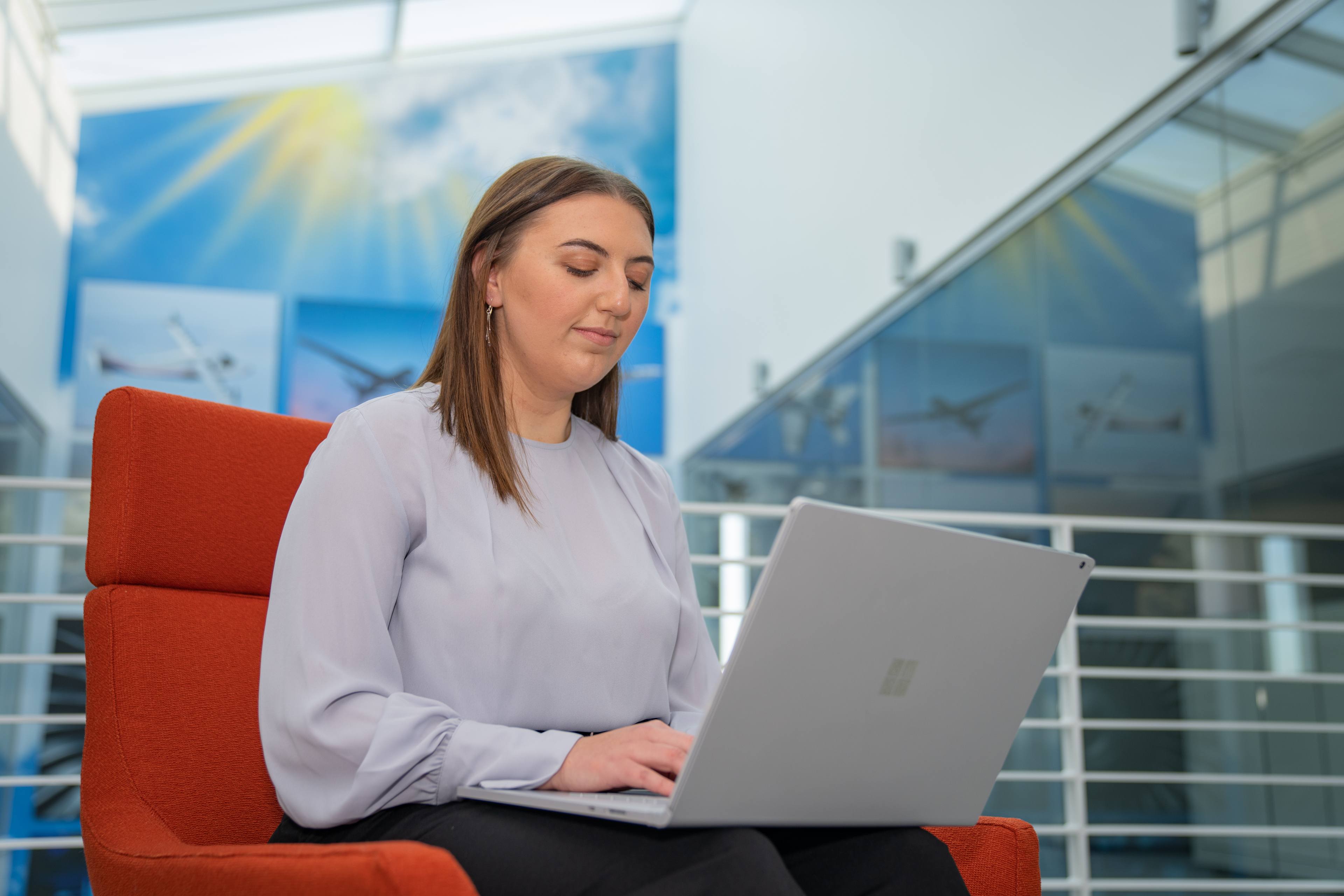 Johnson in an atrium at the NASA Glenn Research Center in Cleveland. 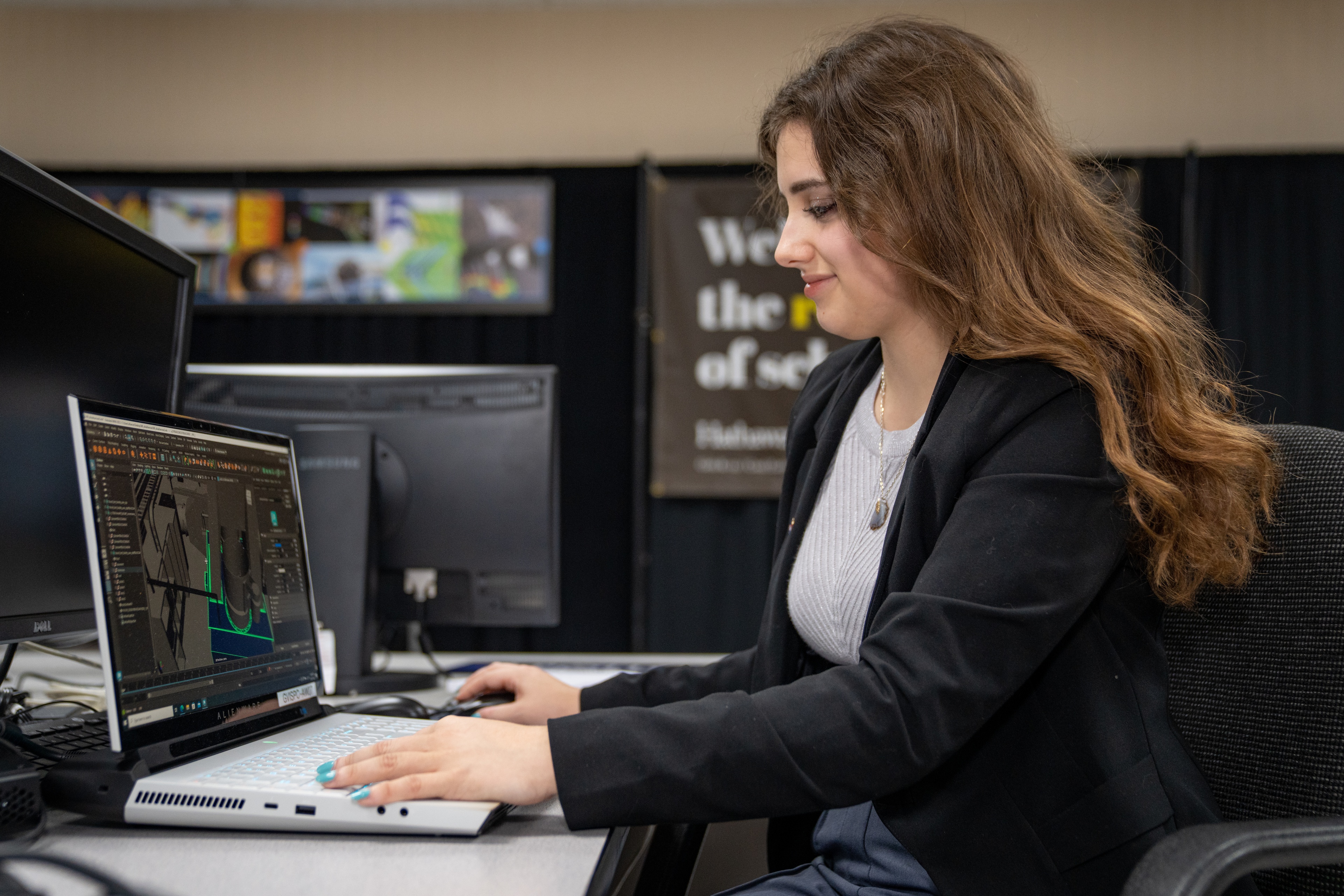 Francese working on a 3D model.

Then, in a pay-it-forward type of moment, Johnson gave a presentation on her internship to the BGSU graphic design club, and Francese was there. The two connected after the presentation, and Johnson put Francese in touch with the right people at NASA, similar to how Monaghan helped her.

"I was really fortunate to have met Heather, which ultimately led me to my now full-time career at NASA, and it felt great to be able to do the same for Olivia," Johnson said.

For Monaghan, helping fellow Falcons find success at NASA has been among the most rewarding parts of her career.

“It was this really cool moment of ‘that used to be me.’ I was the person cold emailing people, asking questions and picking people’s brains," Monaghan said. "And now I’m able to extend that help to other people, and the fact that they are fellow Falcons makes it even more rewarding.”

I was really fortunate to have met Heather, which ultimately led me to my now full-time career at NASA, and it felt great to be able to do the same for Olivia.

The three women each lauded their quality public education at BGSU and the role it played in preparing them to work at the world’s leading space institution.

Monaghan, an out-of-state transfer student, said she arrived at the University with little confidence in her work. Through her classes and with help from attentive professors, she said she slowly started to see herself as an artist.

“I had the most wonderful professors who constantly encouraged me and pushed me,” Monaghan said. “At BGSU, the experience of having to constantly present your work and talk about it has been incredibly helpful for me. It was the hardest thing at the time, but that’s basically what I have to do every day now.”

Johnson’s decision to minor in biology proved to be incredibly beneficial to her work at NASA. Although she acknowledged biology is not directly related to digital art or space, she said the ability to break down complicated scientific topics into easy-to-understand graphics has been crucial to her success.

“In college, I was always thinking about these complex scientific topics and my own ways to translate them into artwork,” Johnson said. “It was really helpful to have that experience of taking something that was super complex and showing it visually. That definitely translates to what I do here when working with engineers and scientists.”

Francese enrolled at BGSU with plans to pursue digital illustration. That changed after taking an introduction to 3D modeling class.

“I just fell in love with it,” she said. “I realized this is what I want to do.”