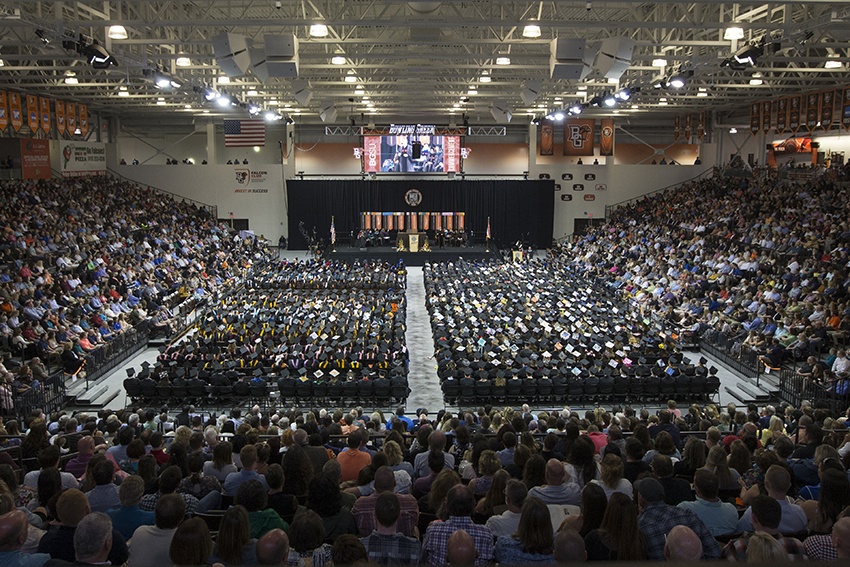 Bowling Green State University will celebrate its 296th graduation in two ceremonies at the Stroh Center Dec. 13 and Dec. 14.

The December graduating class includes 1,047 candidates. Among the undergraduates, 89 will be presented associate degrees and 731 bachelor’s degrees. Of those, 190 have received honors for their high grade-point averages. The 217 graduate students include 187 candidates for master’s degrees and 30 for doctoral degrees.

BGSU students come from all around the world. This graduating class includes 52 international students representing 18 countries. There is also a wide range in overall age, with degree candidates from 18 to 60.

Commencement for the Graduate College and the colleges of Business; Health and Human Services; Musical Arts; Technology, Architecture and Applied Engineering; and BGSU Firelands will be held at 7 p.m. Dec. 13. The colleges of Arts and Sciences and Education and Human Development will hold commencement at 10 a.m. Dec. 14.

Addressing the Dec. 13 candidates will be BGSU alumna Sheryl Maxfield, who earned a bachelor’s degree in journalism from BGSU in 1981. Maxfield was appointed director of the Ohio Department of Commerce in January by Gov. Mike DeWine. She serves as a member of the governor’s Cabinet and is responsible for the overall leadership and direction of the commerce department.

One of the state’s leading regulatory agencies, the Department of Commerce is focused on promoting the growth, success and safety of businesses in real estate, industrial compliance, securities, financial institutions, liquor control, medical marijuana, fire safety and unclaimed funds.

During her career, Maxfield has been recognized by her colleagues for her professionalism and legal expertise. She received an AGO Professionalism Award in 1997 and in 1999 was the inaugural recipient of the Simon B. Karas Award for Outstanding Legal Contribution to the Attorney General’s Office.

In addition to her BGSU degree, Maxfield earned a law degree from the University of Toledo College of Law. She is married to lawyer Michael Maxfield.

Addressing the Dec. 14 candidates will be BGSU alumna Laurie Stevenson, who earned a bachelor’s degree in environmental health from BGSU in 1988. In January, DeWine appointed Stevenson as director of the Ohio Environmental Protection Agency (EPA). A public servant of 30 years, she began her career at Ohio EPA as a field inspector with the Division of Hazardous Waste Management in the agency’s Logan, Ohio, office.

Prior to her appointment, she held the position of deputy director for Business Relations, where she served as a primary contact for regulated entities to help coordinate permitting activities within the agency. She also served as chief of Ohio EPA’s Division of Environmental and Financial Assistance (DEFA), which provides financial and technical assistance to businesses and communities to help achieve compliance with environmental regulations.

A native of Findlay, Stevenson earned a Master of Science in public health from Ohio State University in addition to her BGSU degree. She resides in Columbus with her husband, Jeff, and three children.