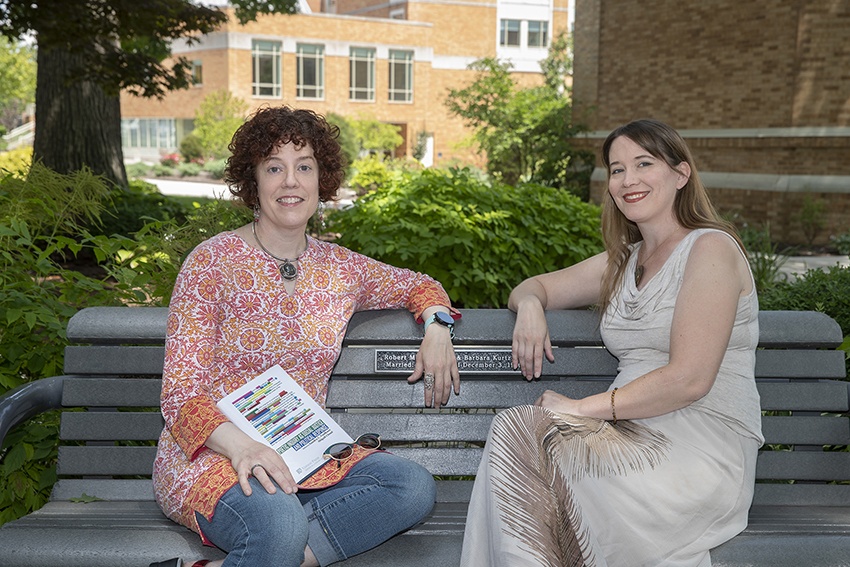 Sandra Faulkner (left) and Abigail Cloud have edited a book on “Poetic Inquiry as Social Justice and Political Response.”

As children and adults who love poetry know, it can be a powerful expression of emotion and opinion, evoking feelings and provoking thought in a way that straight narrative sometimes cannot. A new book co-edited by Dr. Sandra Falkner, professor of communication and director of Women’s, Gender and Sexuality Studies at Bowling Green State University, and Abigail Cloud, senior lecturer in creative writing and editor-in-chief of BGSU’s Mid-American Review, presents poetry as a political and research tool as well as an artistic one.

“Poetic Inquiry as Social Justice and Political Response,” published by Vernon Press as part of its Series in Literary Studies, brings together works by writers from the United States and abroad whose poetry explores the complex realities of injustice, both current and historical. Their topics range from indigenous people to life in a former slave-trading city in Nigeria to education in the U.S. to ecological concerns to women’s issues everywhere. The works showcase poetry as a call to political action, as resistance, and as a way to speak to those issues in a deeply personal form.

In poetic inquiry, poet-researchers present their observations, interviews, personal experience and reflections in poems, often using the poetic voice to distill their findings as well as the voices of those they study. Poetry can be used as research and for research, but must also fulfill its role as an artwork, Cloud said.

“People in education, communication, nursing, social sciences and anthropology have been doing it for a while, sometimes publishing, other times not,” Faulkner said. As political response, it “offers a way to critique power structures, offer alternative views, and advocate for social justice,” she writes in the introduction.

The sections of the book contain articles on poetic inquiry as pedagogical practice and community building, as inquiry into place and local identities, as praxis and connection, and as political response, exploring common themes. The book arose from the biennial International Symposium on Poetic Inquiry hosted by BGSU at Faulkner’s initiation last fall, with the theme of “Poetic Inquiry Breaking through the Abstract: Poetry as/in/for Social Justice.”

The symposium was co-convened with the University’s longstanding annual Winter Wheat Festival of Writing, directed by Cloud. Faulkner is an ethnographer who specializes in relational communication; she has long used poetic inquiry for critical qualitative research and as a teaching method and has published books incorporating the method. Cloud, a poet, was not as familiar with it, but with the symposium she became interested in the new set of possibilities poetry presents for research, political voice and resistance.

“When you read the book straight through, the power of the reflections and the pain inherent in what’s being said is undeniable,” Cloud said.

The format of poetic inquiry can take different forms. One of the book’s articles, “War and the Lyric Voice,” includes a “found poem” created collaboratively by Gisela Ruebsaat and Heather McLeod, in which they combine excerpts from Ruebsaat’s father’s World War II poems with excerpts from McLeod’s mother’s diary, translated from the original German. The poem’s authors arranged the two young people’s excerpts side by side, providing two perspectives on war.

“We see what the struggles were of two individuals, crying out from the page,” Cloud said. “It became almost responsive. They combined stories that presented a common experience.”

In a chapter titled “The Ground Beneath Our Feet: Poetry and Settler Colonialism,” Sheila Stewart discusses her use of poetry to examine her conflicted identity as the daughter of Irish immigrants to Canada, living on land taken from indigenous people. Another Canadian, John J. Guiney Yallop, writes of the shock, after spending his life struggling with his identity as a gay person, of finding out that his grandmother was aboriginal, another long-demeaned group. Learning this new layer of his identity at the age of 50 aroused a spectrum of emotions that he explores in poetry.

Although the poet-scholars are a diverse group, Faulkner said that poetic inquiry shares qualities with feminist methodology. It often is concerned with identity. It can be collaborative, like Ruebsaat and McLeod’s work. It is reflective. It can take the view that truth is multiple — “a hallmark of feminist methodology,” Faulkner said. It embraces the idea of embodiment, eschewing the traditional split between mind and body and embracing a more holistic way of knowing.

“A lot of scholars have trouble with the idea of poetry as embodiment and the rendering of the metaphor in the body,” Cloud said. “But it’s doing a lot of the same things with language and breath that you do in prose.”

“There’s something about poetry you can’t immediately dissect,” Faulkner said. “You feel it in the line, the breath. Some of the meaning even comes from that. Feminist methodology refuses that dialectic.”

As book contributor Kimberly Dark wrote, “The body, the breath and the word put together have power.”

Putting the scholarly essays side by side with the poems highlights how poets and qualitative researchers are both are interested in issues of voice and ideas of authenticity and narrative truth, Faulkner and Cloud said.

The authors answer the question: “What spaces can poetry create for dialogue about critical awareness, social justice, and re-visioning of social, cultural, and political worlds?”