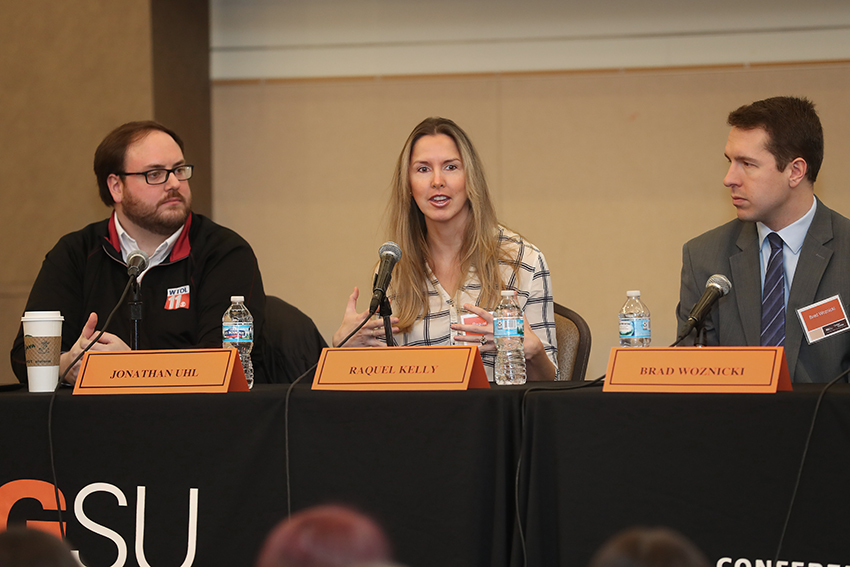 Raquel Kelley ’07, who was one of the first female sportscasters on BG24 News, is now a senior project manager WD Partners in Columbus. Previously, she worked for E! Entertainment and Huffington Post. 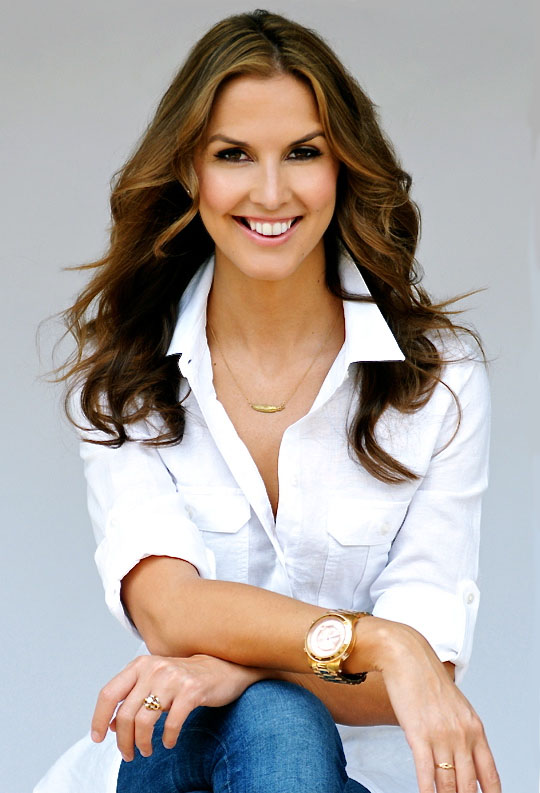 She told students at Bowling Green State University during a recent campus visit to enjoy their time in college and to always give their best effort.

“College is the best four years of your life,” said Kelley, expressing her support of that statement during an alumni panel at BGSU’s eighth annual Media Career Day presented by the MDIA Student Association.

Kelley is a senior project manager with, an architecture and branding firm in Columbus. After graduating with a degree in telecommunications, Kelley left the Bowling Green exit sign in her rearview mirror as she drove to California to work at E! Entertainment, where she began as a production assistant on “LIVE from the Red Carpet.”

She worked there for a decade to finish as a lead producer for the show “Fashion Police.” Her first experience with the company was an internship during the summer before her senior year and was facilitated through another BGSU alumnus, former vice president of programming Jeffrey Shore ’75.

Kelley attributes the eventual job offer she received after her internship to her strong work ethic and consistent ambition — qualities she advised the students to adopt.

“I worked at Trotter’s downtown and many food service companies in my day, and no matter where you are, even if you are waiting tables, be the best waitress there is,” she said. “Because you never know who you are going to wait on — it could be the president or CEO of a company and they could admire your hustle and attitude.”

She also made the most of her college experience. In addition to working full time, Kelley served as president of the University Activities Organization (UAO), where she gained experience and honed her skills in creative marketing, writing news releases releases, budget management, organization, financial management and event planning.

She also was a member of the Sidney A. Ribeau President’s Leadership Academy (PLA). Her involvement with the PLA started the summer before her freshman year of college, and gave her the opportunity to interact with different people in a diverse learning environment.

“I still pull from the tools I learned at the PLA in my career today,” she said. “The most valuable skill I learned was how to communicate with others who have different communicative styles than you, so how to work with and manage different personalities.”

The friendships she formed in college remain strong, despite her move across the country. She met the godmother of her first child in the PLA and was a bridesmaid to another former PLA member. When she recently moved back to Columbus to accept a position with WD Partners, her college friends helped her network and transition back to Midwest living after being on the West Coast for more than 11 years. The decision to move back was influenced by her desire to be closer to family and to give her children the opportunity to experience a childhood like she had in Ohio.

“Don’t get so anxious about the future, because you are never going to have it all figured out,” she told the students attending the panel discussion. “Enjoy this last year or two in college, live it up and have fun. Also, keep your resume in mind and what you’re going to put on it. Don’t stress so much that you’re not going to enjoy now.”

Kelley emphasized during the panel that she is still figuring out her life’s journey and that the first job post-gradation does not have to be the “coolest or prettiest job.” She also agreed with other panelists that having a “side hustle” or other means of income can help supplement low income that may come with starting positions.

In her spare time, Kelley started a lifestyle blog chronicling her personal experience with wedding planning, and she now uses her experiences as a working mother to contribute to the blog today. Using the skills she gained through her journalism minor, she served as a Los Angeles expert and writer for Condé Nast’s Brides magazine and is a current contributor and featured blogger for the Huffington Post.

“I think part of my success is having the mindset of ‘Why not me?’ instead of ‘Why can’t it be me?’” she said.

Kelley applied that positive thinking when she asked in an email to shadow ESPN broadcaster Suzy Kolber on "SportsCenter" during her senior year of high school. She advised current media students to “reach out and ask” potential employers or professionals in the field because it could lead to new opportunities. Her decision to study telecommunications was not her parents’ first choice, and she said her dad wanted her to be a teacher, because it was considered a nice, stable job.

“Do what you feel is right for yourself, even if everybody else is telling you to do something stable,” Kelley said. “If you want it bad enough, you’re going to get it.”

When asked about her first pilgrimage to intern in Los Angeles, Kelley said that the uncertainty of what was going to happen was scary, but manageable because it felt like something she could and wanted to do. Her only regret was not taking advantage of the study abroad programs at BGSU. She said that her on-campus involvements and work schedule made it too difficult to travel, but she wishes she had because “now in life, I don’t have time to just go to Europe for a month.”

Kelley fondly reflected that her college experiences were the key to her future and that she still applies them to her current career: “I would not have gotten anywhere near where I have been in my career without the foundation, tools and relationships I built in Bowling Green.”