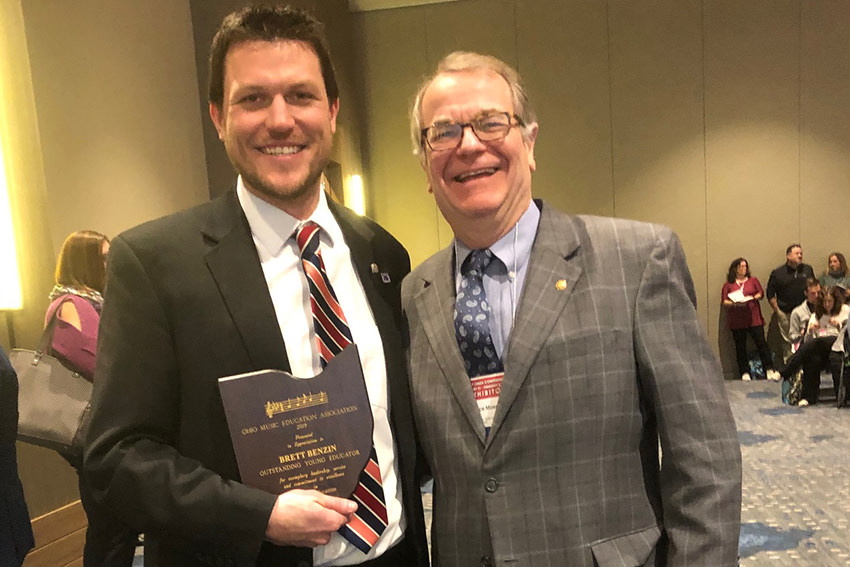 Each year, the Ohio Music Education Association (OMEA) honors one young educator who is committed to excellence in music education and is deserving of statewide acknowledgement.

This year, OMEA granted the Outstanding Young Music Educator Award to Brett Benzin '11, who majored in music education in the College of Musical Arts at Bowling Green State University.

"My initial reactions ranged from being overwhelmingly proud to very excited," Benzin said. "OMEA has given me so much, both as a young student and as an educator, and to receive an award honoring some of my achievements is truly special."

Since 2015, Benzin has served as the director of bands at Keystone High School in LaGrange, Ohio, where he also teaches music to grades 6-12.

"I greatly enjoy working at Keystone," Benzin said. "I have a supportive school administration and great colleagues."

Benzin's success in this role have shown an increase in the number of students interested in the band, and twice Benzin has led Keystone to a qualify for the OMEA State Large Group Event.

His passion for music started in grade school.

"I knew I wanted to be a band director when I was in seventh grade," Benzin said. "Marty Lydecker, my band director at North Royalton (Ohio) High School, encouraged me to become the best musician and person that I could be and I am very grateful for his support."

It is evident that his early passion grew during the journey to his professional career. Outside of the classroom, Benzin is also very active in OMEA. He currently serves as president-elect of OMEA District IV as well as serving as the All-State Band Chair in 2016. Benzin is also a member of the American School Band Directors Association.

The Outstanding Young Music Educator Award is granted to a music educator in Ohio who has 3-8 years of experience in the field. The award, announced annually at the OMEA Professional Development Conference, has been granted to a Bowling Green State University graduate every year since its inception in 2015: Ryan Hurd 2018; John Carmack 2017; Megan Link 2016; and Lindsey Newlove 2015.

"I thoroughly enjoyed studying at BGSU," Benzin said. "But I am most grateful to Bruce Moss and Charles Saenz. These two professors helped guide me to become the best educator I can be, and I am grateful for their service and dedication."

Recipients are nominated by current OMEA members who believe the young educator demonstrates outstanding leadership and dedication to bringing the arts to youth.

"Earning this award recognizes Brett's dedication to becoming an excellent music educator," said Benzin's nominator, Adam Landry '08, who serves as the director of choirs at Mentor (Ohio) High. "Brett is an exemplary young music educator. His students, colleagues and administrators describe him as a teacher who creates a welcoming and positive environment in his classroom."

Benzin also thanked Kathleen McGrady and Bernie Schwartz at nearby Springfield Local Schools, where he completed his student teaching while at BGSU. Both McGrady and Schwartz are graduates of BGSU, the former serves as the OMEA President, the latter as an instructor in the College of Musical Arts at BGSU.

"This achievement means the world to me," Benzin said. "This award is not only a measure of my work, but a testament to all of the educators who have shaped me in my young career and who helped push me through their dedication, support and passion in my field."